The Pound to Australian Dollar exchange rate reached a two-month high early in the new week but could struggle to advance further over the coming days if the “oversold” AUD/USD continues to draw bids from the market near to the major support level of 0.7106.

Pounds were bought and Australian Dollars sold on Tuesday as stock and commodity markets tumbled across the globe, enabling the Pound-Australian Dollar rate to probe briefly above technical resistance around 1.8762 on the charts.

This was as investors and traders walked away from risk assets for the second time in recent days in response to remarks from the chief executive of drug company Moderna, who expressed scepticism about whether Moderna’s vaccine could protect against the newest strain of the coronavirus.

“The tone was jarring for the market and is in rather sharp contrast to comments from Pfizer,” says Steen Jakobsen, chief investment officer at Saxo Bank.

The resulting sell-off in already bruised financial markets echoed the ‘shoot first and ask questions later’ responses taken by investors when the Omicron variant was first detected last week as it remains the case that little is known about the new strain.

Despite persistent and widespread risk aversion the main Australian exchange rate AUD/USD was quick to draw a bid after it dipped briefly beneath the 0.7100 handle on Tuesday, leading it to pare losses in price action that also had the effect of reigning in the Pound-Australian Dollar rate. 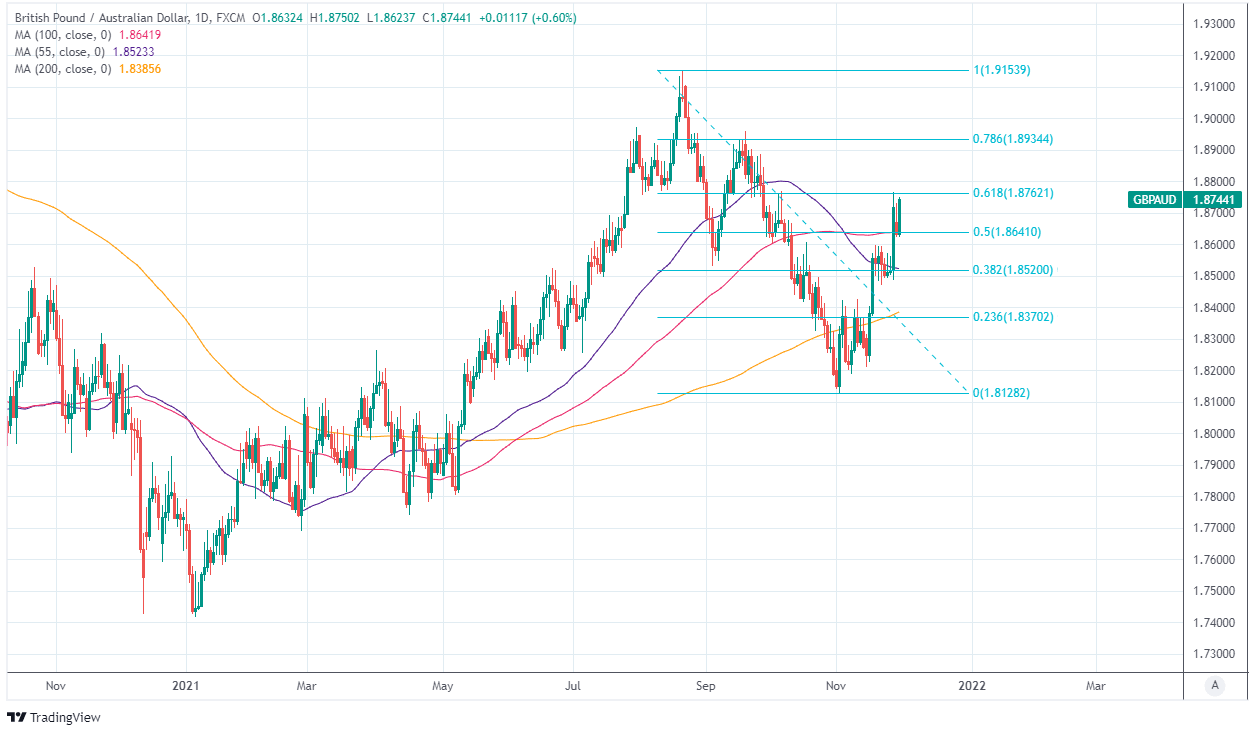 “The A$ is the most oversold it has been since the August 2021 0.7106 low which cautions about getting too negative here. However, the fact that we were not able to extend much above the 0.7150/70 level last night leaves the technical position looking pretty poor,” says Robert Rennie, head of financial market strategy at Westpac.

Rennie and the Westpac team suggested on Tuesday that the oversold condition of the Aussie could work to prevent further losses for AUD/USD in the short-term, which would limit if not entirely rule out any further upside for the Pound-Aussie rate at the same time.

However, the Aussie lender also told clients that any rallies in AUD/USD should be viewed as selling opportunities because the bank’s analysts view a sustained break beneath 0.7100 as being just a matter of time, meaning there may eventually be scope for further GBP/AUD gains.

“AUD/USD is getting ever closer to the August low at .7106 around which it is expected to find at least short-term support. Below it lies the 7077/32 July and December 2019 as well as June 2020 highs,” says Axel Rudolph, a senior technical analyst at Commerzbank.

The Pound-Australian Dollar rate often tends to benefit from declines in AUD/USD and vice versa, while it always closely reflects the relative performance of AUD/USD and the main Sterling exchange rate GBP/USD.

“AUD remains vulnerable to more downside in our view while omicron uncertainty remains. Any evidence that current vaccines are less effective against omicron can push AUD towards 0.7000,” says Kim Mundy, a senior currency strategist at Commonwealth Bank of Australia.

Tuesday’s price action and warnings of further eventual downside for AUD/USD come ahead of third quarter GDP data and October retail sales figures due out of Australia on Wednesday and Thursday morning, although local analysts say neither is likely to alter the outlook for the antipodean Dollar.

“The September quarter national accounts are old newsnow. While they give us a detailed starting point for the economic recovery, markets are rightly focussed on the rebound in the current quarter and the risks to the broader outlook. Data to date suggest that Q4 GDP growth will be very strong,” says Felicity Emmett, a senior economist at ANZ. 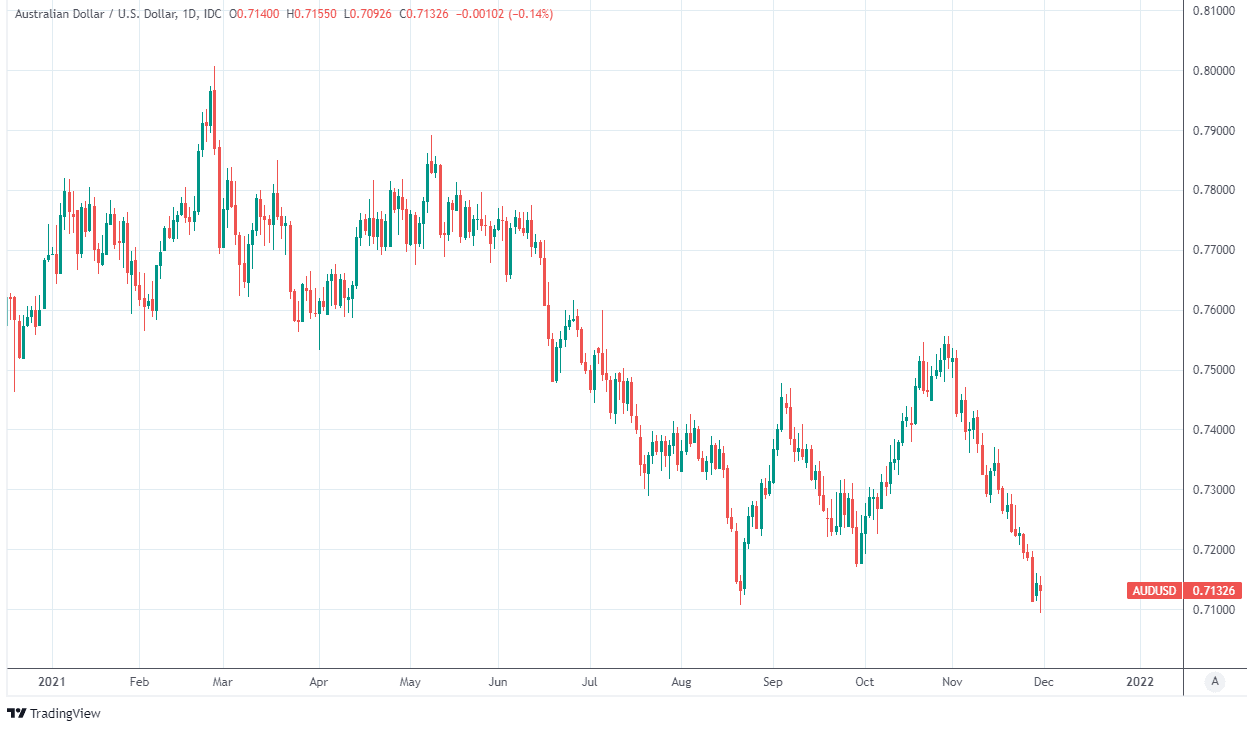 Above: AUD/USD shown at daily intervals.