The Pound-to-Australian Dollar rate entered the holiday-shortened week on its front foot and with scope to rise as far 1.90 or slightly above over the coming days, although Sterling could be pressured lower into a retest of support at 1.88 later this week in the event of further U.S. Dollar declines.

Sterling lifted off a tried and tested level of support around 1.88 against the Aussie on Monday and could have scope to rise further over the coming days when Australian domestic economic risks come back into focus as the September month gets underway.

This is after coming under pressure late last week following Federal Reserve (Fed) Chairman Jerome Powell’s keynote address Federal Reserve Bank of Kansas’ Jackson Hole Symposium, which saw the Australian Dollar and other commodity currencies outperforming as the U.S. Dollar declined ahead of the weekend, although this pattern of price action had already knocked GBP/AUD lower from above the 1.91 level before Friday’s address.

“While the US dollar was under pressure for most of the week, the sharpest movement came in response to Federal Reserve Chair Jay Powell’s keynote speech,” says Sean Callow, a senior currency strategist at Westpac in Sydney. “Given Australia’s pandemic news is likely to remain grim near term, any further AUD/USD gains are likely to rely on a further US dollar decline. This leaves all eyes on Friday’s employment report.”

Above: Selected remarks from Chairman Jerome Powell’s speech titled “Monetary Policy in the Time of COVID”.

Chairman Powell confirmed it’s now likely the Fed will begin to wind down its quantitative easing programme before year-end but ruffled the market as well as the U.S. Dollar’s feathers when noting the U.S. economy will have to pass “a different and substantially more stringent test” involving reemployment of the remaining six million American workers idled by the coronavirus last year before the bank eventually lifts its interest rates.

This evidently disheartened the segments of the market that had grown more confident since last month’s meeting that the Fed could raise rates by the end of next year, and potentially enhances the sensitivity of the Dollar and other currencies to the outcome of this Friday’s non-farm payrolls report, particularly in the event of a disappointing number as further job gains are key to any and all changes in Fed policy.

The Pound-to-Australian Dollar rate always closely reflects the relative performance of AUD/USD and the equivalent main Sterling exchange rate GBP/USD, and would likely come under pressure again later this week if U.S. job numbers miss the mark on Friday and in the process incite another wave of U.S. Dollar declines that lifts AUD/USD above last week’s highs of 0.7310.

“We expect AUD to resume its downtrend this week. FOMC tapering, weakening Chinese economic growth, a negative Australia‑US bond spread and falling commodity prices remain weights on AUD/USD. We are very bearish about the Australian economy in the next several months and expect the bounce‑back to be weaker than it was in 2020. We now forecast GDP to contract by 4.5%/qtr in Q3 21. Consequently, we expect the RBA will delay tapering asset purchases at its policy meeting next week,” says Kevin Xie, a strategist at Commonwealth Bank of Australia. 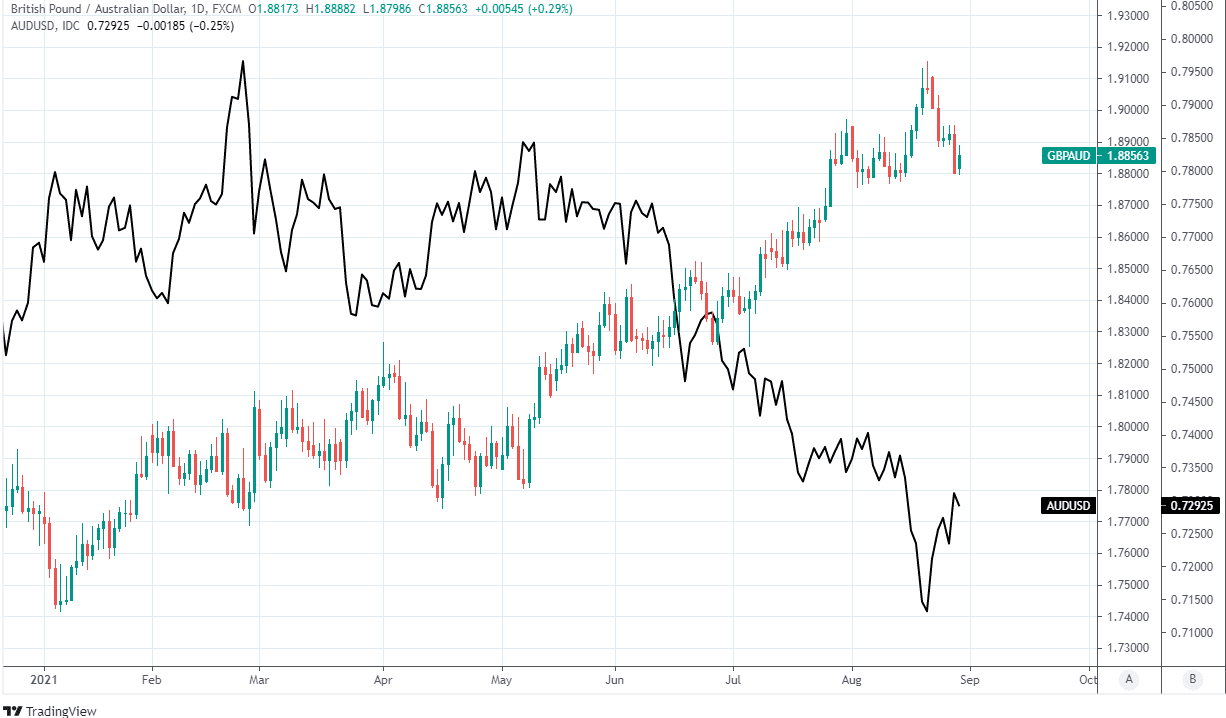 Above: Pound-to-Australian Dollar rate shown at daily intervals alongside AUD/USD.

However, in the absence of the above referenced stimulus for the Aussie or any sudden losses for Sterling, the main Australian exchange rate AUD/USD could be set to come back under pressure and this would mean the Pound-to-Australian Dollar rate could have layed out in front of it all of the ingredients necessary for a recovery that could potentially take it back above 1.90 over coming days.

“The GDP numbers for the June quarter, whilst dated, are important in that they give us a baseline of the economy before heading into the Sydney outbreak, which began on June 16,” says Besa Deda, chief economist at St George Bank.

“The GDP data for the September quarter when it is released later this year will show a sharp fall in economic activity in the current quarter, especially in NSW. Businesses are starting to feel the pinch more from the lockdown now and we expect unemployment to rise. The support measures from the government will help cap the rise in joblessness, but it will not prevent it over the next few months,” Deda says.

The week ahead is a quiet one for the UK economic calendar although the Australian Dollar could be sensitive to second quarter GDP data due for publication in the early hours of Wednesday morning, which will offer an understanding of the economy’s condition before large parts of it returned to a ‘lockdown’ in the third-quarter, one that could now be set to draw on well into September if not into Autumn. 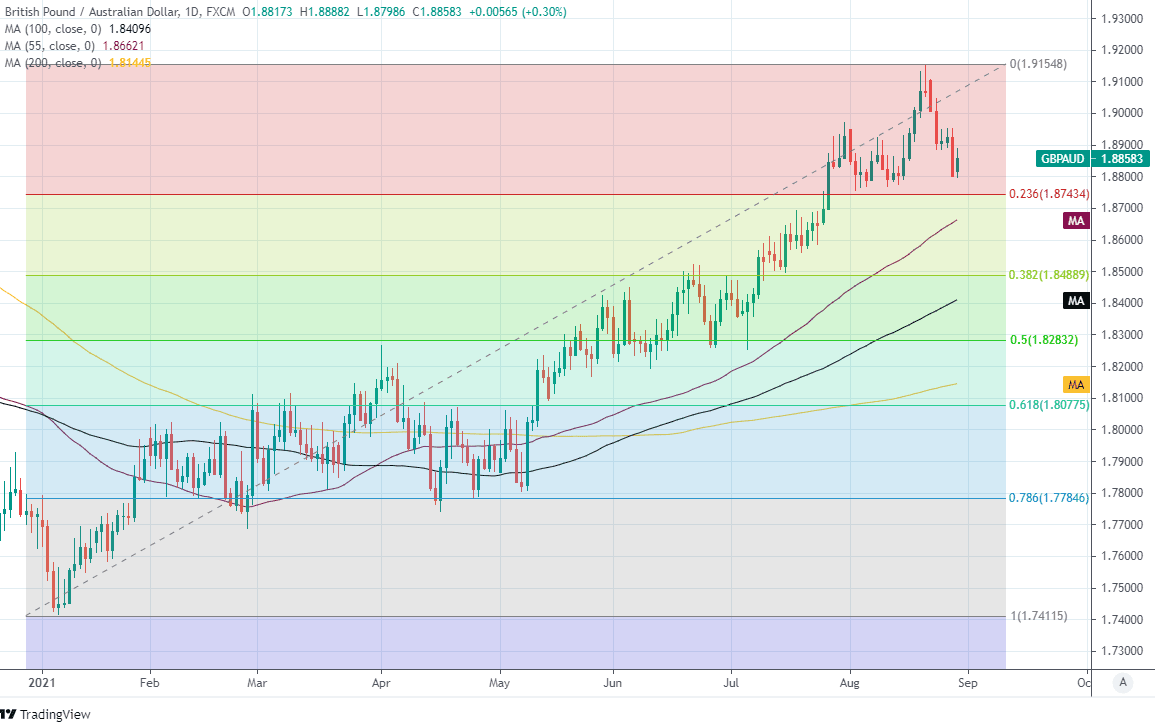 To the extent that this week’s data leads the market to anticipate that the Reserve Bank of Australia (RBA) could feel compelled on September 07 to cancel the planned tapering of weekly government bond purchases under its quantitative easing programme, from A$5BN to A$4BN per week, it could potentially push AUD/USD back to last week’s lows around 0.7235 if not further.

Analysts at Westpac and Commonwealth Bank of Australia have tipped GBP/AUD to rise even further than that over the coming weeks, but have also warned about the prospect of a correction lower for Sterling in the final quarter when they expect the Aussie to recover recent losses. 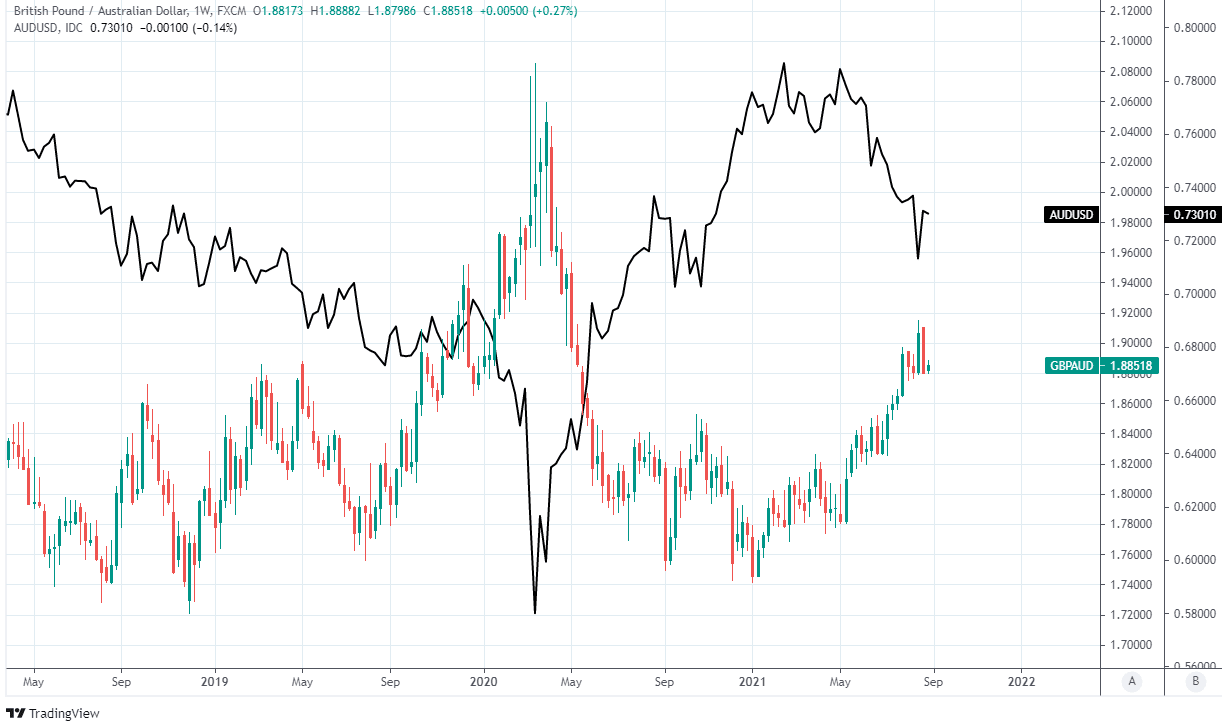 Above: Pound-to-Australian Dollar rate shown at weekly intervals alongside AUD/USD.