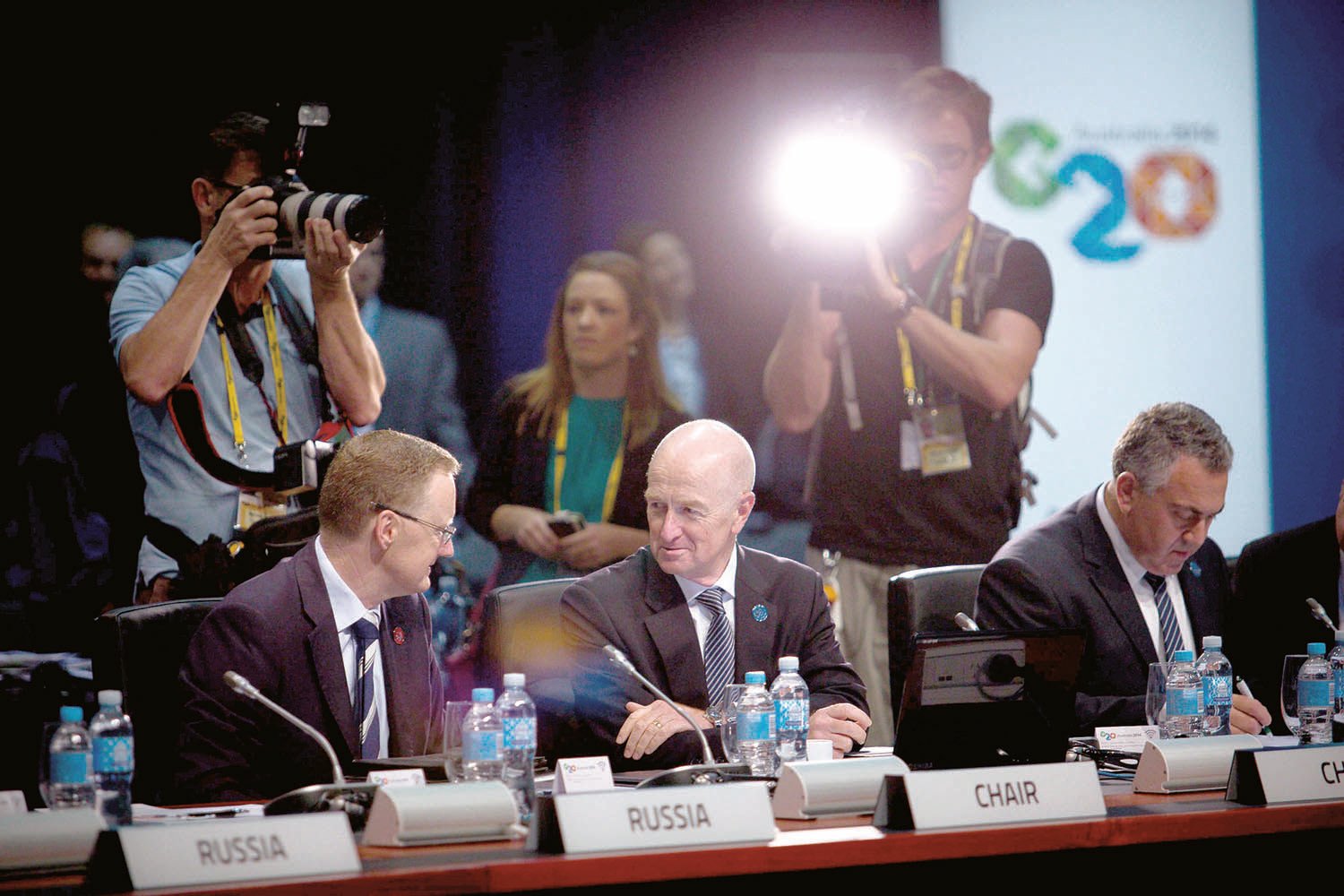 Despite a gruelling Sydney lockdown and economist expectations for the economy to shrink in the third quarter, the Reserve Bank of Australia has said it will continue to reduce its quantitative easing programme as per plans laid out in July.

The Australian Dollar rose sharply against its key rivals, suggesting the market was prepared for the Reserve Bank of Australia (RBA) to adopt a more proactive approach to a slowing economy.

The decision to taper quantitative easing in this manner means the RBA is actually reducing the monetary support it offers to the economy, betting that ultimately the lockdowns and resultant economic impact will prove insignificant over a medium-term horizon. 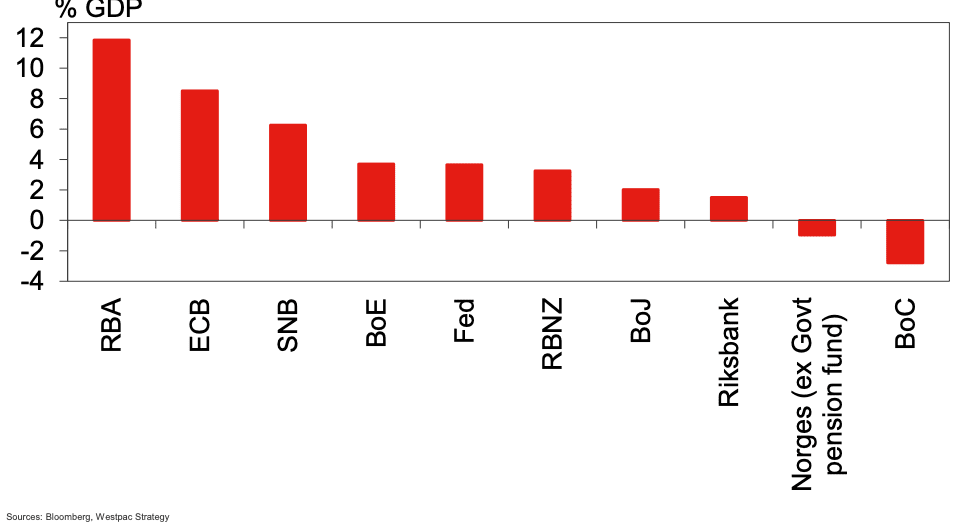 Pound Sterling Live has over recent days reported economists were expecting the RBA to delay tapering and maintain the scale of its quantitative easing programme unchanged at A45BN from September, with some even saying that a boost to quantitive easing should be considered.

"We had thought a taper delay was likely, to demonstrate that the RBA is prepared to use the flexibility provided by its new approach to quantitative easing," says David Plank, Head of Australian Economics at ANZ.

But the RBA is prepared to view the economic impact of Covid lockdowns as temporary in nature.

"The experience to date has been that once virus outbreaks are contained, the economy bounces back quickly," said RBA Governor Philip Lowe.

"Prior to the current virus outbreaks, the Australian economy had considerable momentum and it is still expected to grow strongly again next year. The economy is benefiting from significant additional policy support and the vaccination program will also assist with the recovery," he added.

The decision meant the Australian Dollar was the best performing major currency of the day: 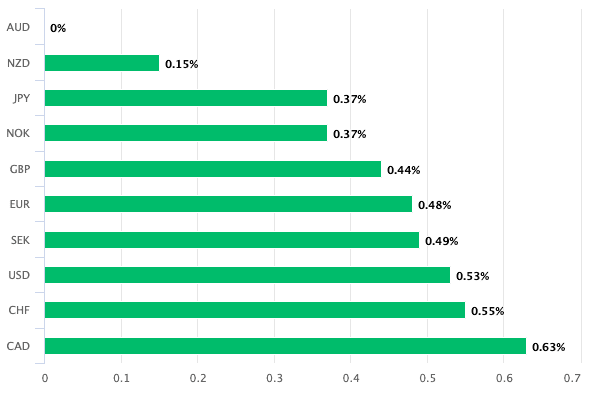 Above: AUD performance on Aug. 03.

"AUD’s gains came after a less dovish than expected RBA outcome," says Adam Cole, Senior Currency Strategist at RBC Capital Markets. "This looks like an RBA that believes that continuing QE at the current pace is likely to have limited impact."

Despite the gains made by the currency, the Australian Dollar is still the worst performing currency of the past month, a result of markets pricing in slower Aussie growth and a potentially more proactive approach from the RBA: 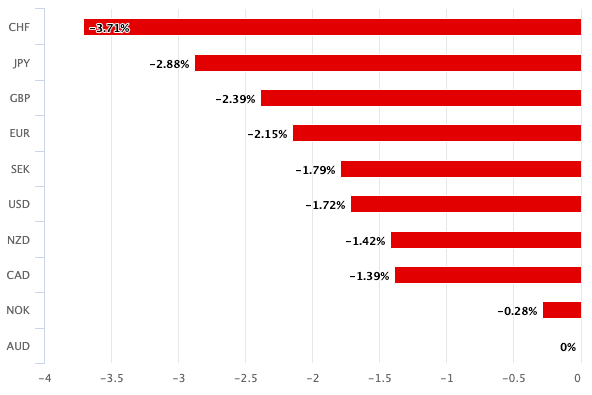 Above: AUD performance in the month to Aug. 03.

The central bank maintained the cash rate target at 0.10% and maintained the target of 10 basis points for the April 2024 Australian Government bond.

"This scenario is based on a significant share of the population being vaccinated by the end of this year and a gradual opening up of the international border from the middle of 2022," said Lowe.

The RBA note the employment situation in the country remains robust and they expect while some jobs will be lost owing to lockdowns the main impact of the containment measures will be to lower hours worked and participation.

A pick-up in both wages growth and underlying inflation is expected.

Looking ahead, ANZ's Plank says the bar to any further easing at the RBA has been set high by today's policy response.

"In the face of such uncertainty we can’t rule out the RBA taking additional steps to support the economy. It could, for instance, change its mind about tapering in September. But something would need to change the RBA’s view on the likely resilience of the economy to lockdowns, especially with fiscal policy continuing to being very responsive," he says.

Ulrich Leuchtmann, Head of FX and Commodity Research at Commerzbank, says the RBA decision will serve a warning to those looking to bet against the Australian Dollar on the basis that the RBA is one of the more dovish G10 central banks.

"All you could really read about the RBA in recent weeks was that it was wait-and-see in an AUD-damaging way," says Leuchtmann.

"It may even be that those who have so far wanted to put the RBA in the ultra-expansive corner will be at least marginally more cautious going forward," he adds.

Therefore, the RBA-inspired weakness in the Australian Dollar seen in June and July might not be repeated again according to Leuchtmann.

Economists at Westpac had expected the RBA to boost its quantitative easing programme in light of the rise in Covid case, they concede that the RBA's fortitude makes the bar to further easing incredibly high.

"The Delta variant represents a complex set of risks, and it seems surprising that the Board would not have adjusted this flexible policy instrument in recognition of those risks," says Bill Evans, Chief Economist at Westpac. "The hurdle for adjusting policy is surprisingly high."

Given the decision today in light of such a sharp deterioration in the near-term outlook, Evans says it seems likely that there will be no policy adjustment in September and October.

Westpac’s central case is that by the November RBA meeting, the recovery will be underway, particularly supported by widespread vaccination, and it would then be appropriate for the Board to scale back its purchases to a A$3BN weekly pace.

"We remain comfortable with our view that the Board will begin raising the cash rate in the March quarter of 2023 and are encouraged by the improved medium-term outlook in the RBA’s forecasts for unemployment, inflation, and economic growth," says Evans.

However, Marshall Gittler, Head of Investment Research at BDSwiss Holding Ltd says the Aussie Dollar is unlikely to be witnessing a significant turn in trend.

"AUD got a big boost from this news. However, I doubt it will last long," says Gittler.

"It appears to me that the market is concerned about the outlook for commodities. I expect some profit-taking or perhaps the opening of new short positions to push AUD back down somewhat," he adds.