The Pound-to-Australian Dollar rate is increasingly close to becoming the best performing Sterling exchange rate for 2021 and could see aggressive further upside if the Reserve Bank of Australia (RBA) comes out swinging on Tuesday in support of the troubled Australian economy.

Vast swathes of Australia’s economy have been taken offline and idled in ‘lockdown’ over the latest wave of coronavirus infections, the country’s largest so far to date and while some restrictions have recently been eased in a handful of areas, others have been prolonged in key economic hubs.

The Greater Sydney area of New South Wales, the largest state economy in Australia, is one example of the latter and if the experiences of other countries including the UK are anything to go by then the latest disruption could potentially continue for months yet.

“NSW accounts for around 31% of output and around 32% of the population. We estimate the NSW economy will contract by nearly 8% in Q3, before rebounding by almost 6% in Q4,” Besa Deda, chief economist at St George Bank.

“We expect the contraction in the national economy to be short lived and confined to one quarter with a recovery of 3% pencilled in for Q4.

However, these forecasts rely on NSW emerging from the lockdown at the end of September and other states and territories avoiding further lengthy lockdowns,” Deda writes in a note on Monday. 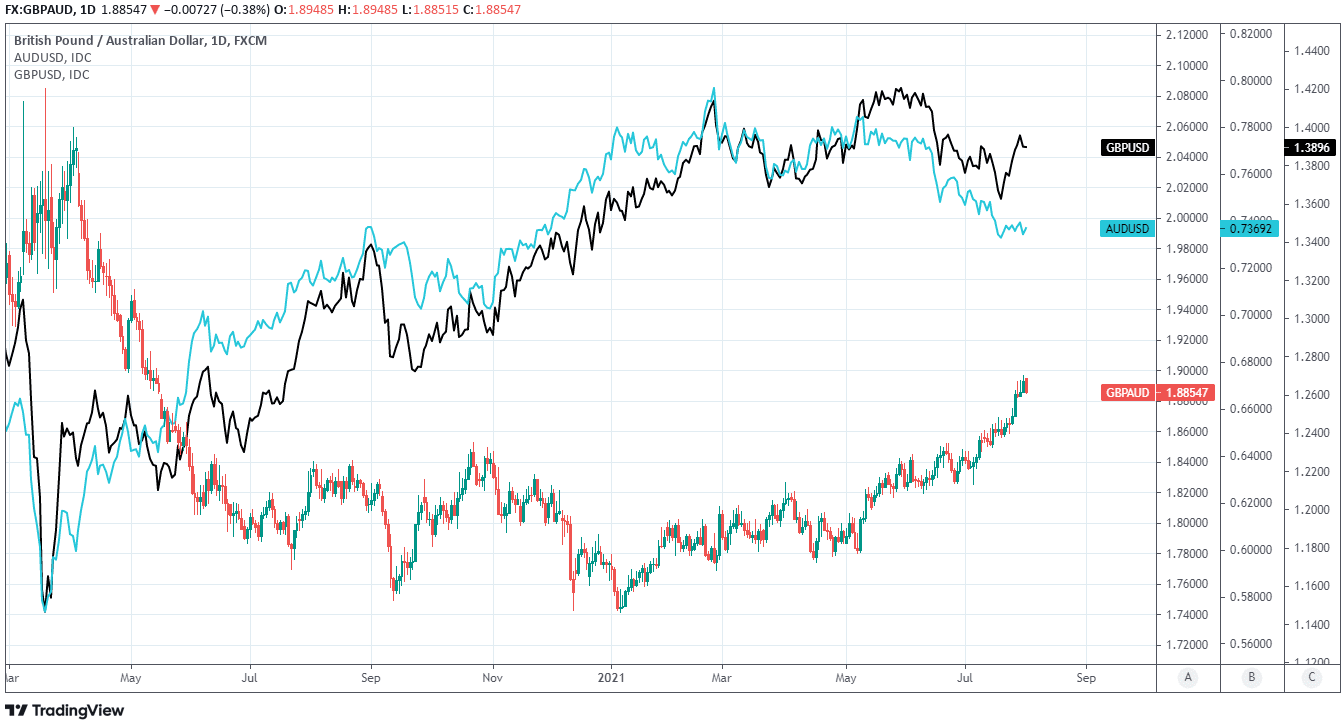 Above: Pound-to-Australian Dollar rate shown at daily intervals with AUD/USD and GBP/USD.

This is a fundamental about-turn on the situation that existed just a few short weeks ago when in early July an economy that “was transitioning from recovery to expansion,” encouraged the RBA into a decision to reduce from September the amount of Australian government bonds bought under its quantitative easing programme each week from A$5BN to A$BN.

That decision is now widely expected to be reversed on Tuesday at 05:00 London time in the RBA’s August policy decision if the views of local firms are anything to go by, though what the Australian Dollar and the markets are unprepared for this week are additional actions.

These could include an increase in value of the RBA’s weekly QE purchases from A$5BN to A$6BN or more, and potentially a decision to extend the life of the QE programme by aiming purchases at Australian government bonds with maturities beyond the currently targeted April 2024 maturity.

It’s contextually relevant that at the same time as Australia is mired in ‘lockdown’ the economy of the country’s largest trade partner, China, is also slowing and that Australia’s export commodity prices are softening in what reflects a double-barreled set of international headwinds too. 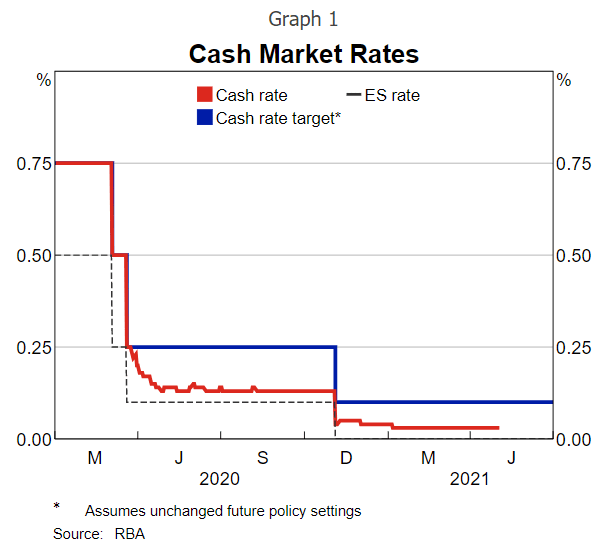 Above: RBA’s official cash rate target (0.10%) shown in blue with the actual (lower) cash rate (0.03%) level observed in the market shown in red and alongside the exchange settlement interest rate (0.03%) paid to commercial banks in return for deposits at the RBA.

“AUD/USD will struggle against a strong USD, ongoing uncertainty around the near term domestic economic outlook and the negative Australia‑US 10 year bond spread. We consider AUD can retest this year’s low of 0.7290,” says Carol Kong, a strategist at Commonwealth Bank of Australia.

The Pound-to-Australian Dollar rate was trading near to its highest level since May 2020 early in the new week but could rise further to 1.9067 if the main Sterling exchange rate GBP/USD holds around its Monday level and CBA is right to look for AUD/USD to fall to 0.7290 over the coming days.

“AUD can fall further if the RBA reverses its decision to start tapering asset purchases because of the Greater Sydney lockdown at its policy announcement on Tuesday. The risk is an even sharper move lower in AUD if the RBA announces an increase in its asset purchases,”CBA’s Kong and colleagues write in a Monday research briefing.

There’s every chance that GBP/AUD rises further than 1.9067 however, especially if the RBA does reverse July’s decision to begin tapering off its bond purchases from September and if AUD/USD falls further as a result; and doubly so if the bank takes the market by surprise with additional actions. 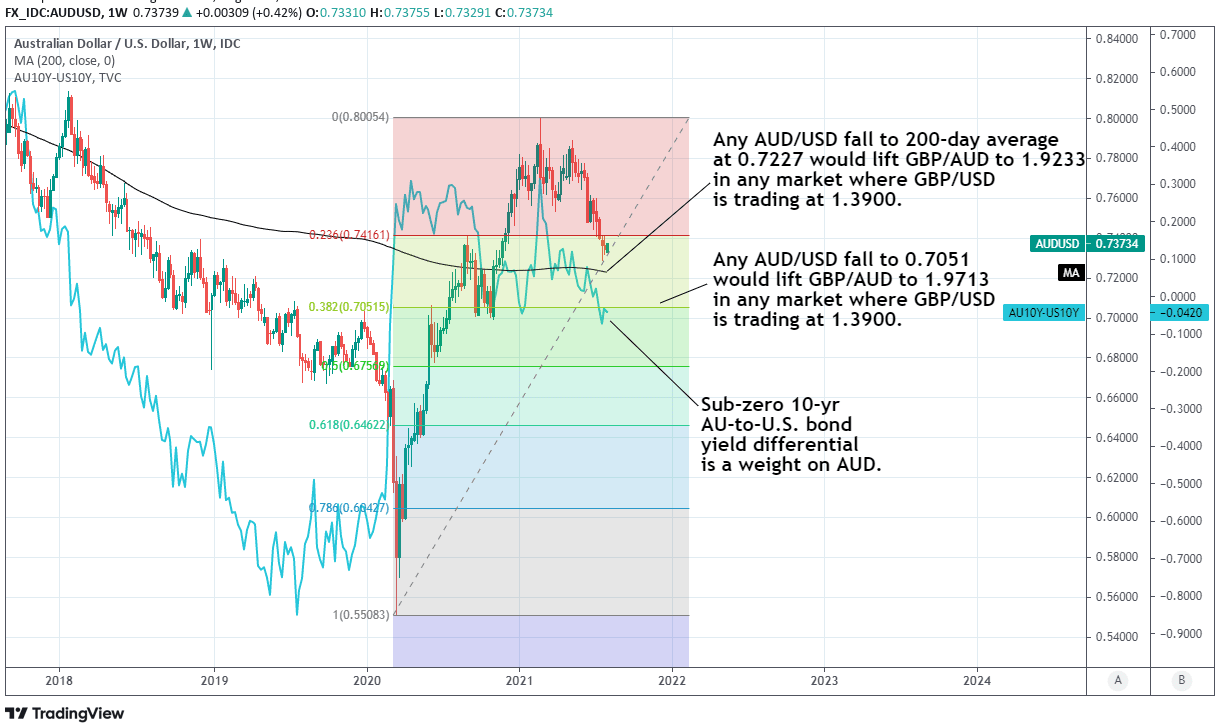 The danger for the RBA is that with new virus curbs shuttering the economy it could now take even longer, beyond the earlier anticipated point of 2024 for employment levels and wage growth to be strong enough in Australia for its 2%-to-3% inflation target to be sustainably achieved, which would necessitate further support for the economy from the bank and government.

“We expect the RBA will respond by next week announcing it will delay the start date for the tapering of its bond-buying program. There is also a possibility that the RBA will lift the volume of its weekly bond purchases to support economic activity whilst NSW continues to grapple with the outbreak,” says St George Bank’s Deda.

CBA has previously warned of an AUD/USD decline as far as 0.70 over the coming weeks and months due to the pressure the RBA is placing in Australian government bond yields, which now pay investors less than their U.S. equivalents, which would likely be even more the case if on Tuesday the RBA seeks to reduce financing costs for the Australian government, households and companies.

Such an outcome would lift the Pound-to-Australian Dollar rate above 1.97 in the absence of intervening declines in the main Sterling exchange rate GBP/USD from near 1.39, which will be sensitive this week to the outcome of Thursday’s Bank of England monetary policy decision.

CBA looks for the Pound-to-Australian Dollar exchange rate to rise to 1.9230 this week, an increase of more than one percent from Monday’s levels. 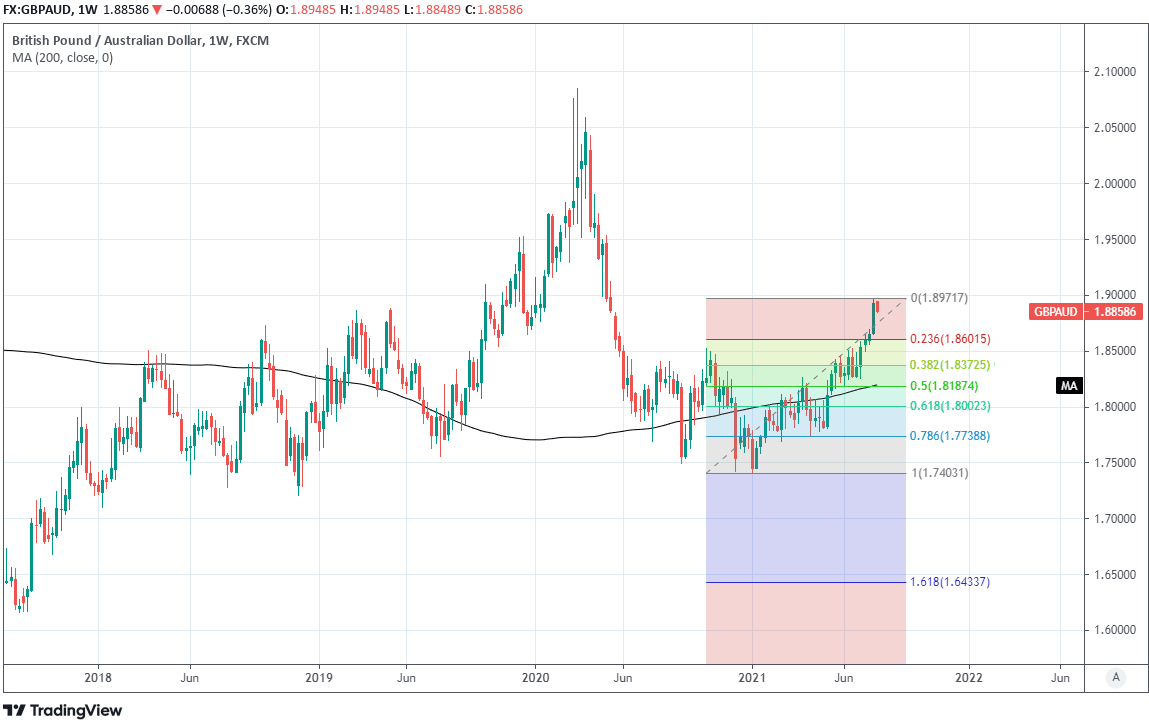