The Pound-to-Australian Dollar exchange rate is one of few Sterling pairs to have remained on its front foot in the last month, although analysts at Westpac say it could rise further over the short-term due to mounting downside risks to the Aussie that could crystalise following the July 07 Reserve Bank of Australia (RBA) policy decision.

Large Australian metropolitan hubs including Sydney and its surrounding areas were thrown back into ‘lockdown’ in the final week of the second quarter after one of the coronavirus’ many new derivatives made it across the country’s closed international borders and into its economic nerve centres.

Those nerve centres already accounted for more than a fifth of Australian economic output although since then other areas including Darwin and the country’s third largest economic state Queensland have edged closer toward renewed shutdown also, which has been weighing on the Aussie with mere days to go before the all-important RBA decision.

The RBA will announce next week what it intends to do about a A$100bn or A$5bn per week quantitative easing programme that is set to reach the end of its lifespan in September, and will also have an opportunity to respond to recent market speculation about Aussie interest rates.

“Sydney's lockdown has at least 8 days to run while activity restrictions around Australia change by the day. We are warned that this will remain the unsettling situation until vaccination rates are much higher,” says Sean Callow, a strategist at Westpac.

Callow wrote in a research note Thursday that a restive U.S. Dollar and risks posed to Australia’s economic recovery by its government’s handling of the pandemic could see AUD/USD slipping to 0.74 in the short-term, which is a price move that would be highly supportive of GBP/AUD. 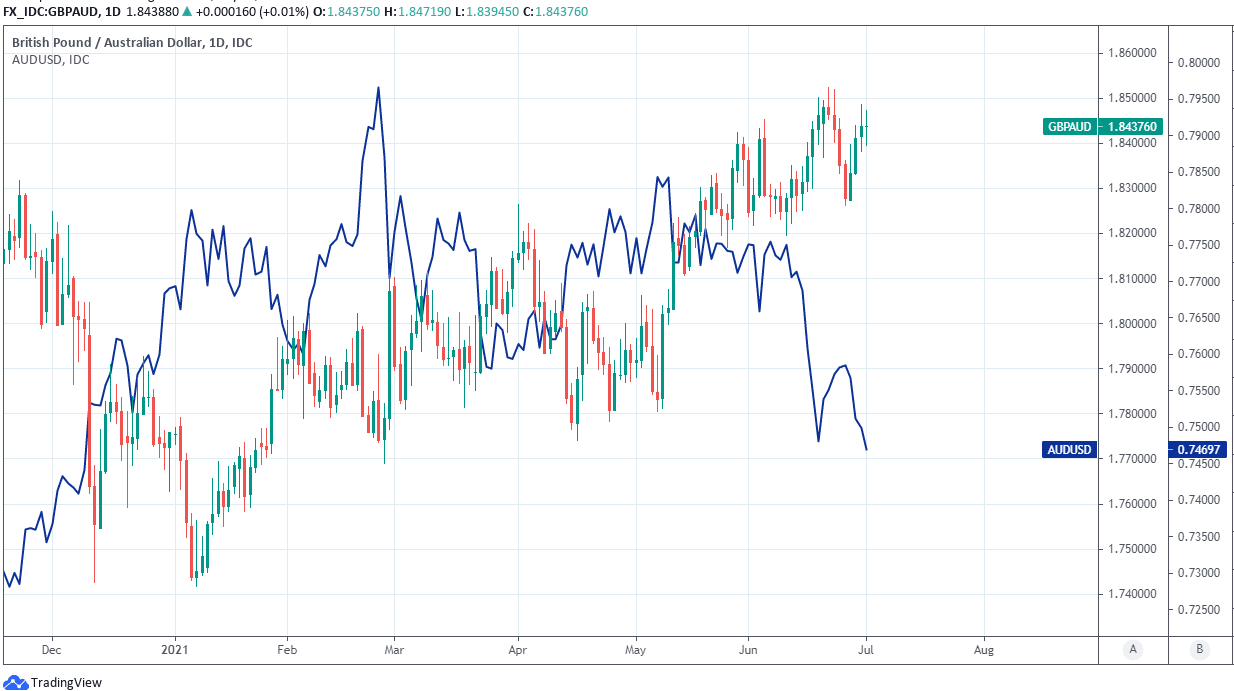 Above: Pound-Australian Dollar rate shown at daily intervals alongside AUD/USD.

“Australia’s very strong trade position and leverage to Asian growth should help AUD/GBP back to 0.56 , but near term, only a hawkish RBA surprise seems likely to prevent sustained trade below 0.5400,” Callow says, before warning; “There is discussion of whether Australia’s current Covid clusters, notably in Sydney, could cause the RBA Board to lean to the dovish side, albeit just in rhetoric rather than policy settings.”

Callow has warned that without a possibly-unlikely lift from the RBA the Australian Dollar is in danger of ceding more ground to Sterling in the short-term and enough for the Pound-Aussie rate to potentially be on the cusp of a break above last week’s one-year high around 1.85.

The Pound-Aussie rate would trade as high as 1.8640 if AUD/USD reached 0.74 and at the same time GBP/USD held onto the nearby 1.38 handle, though gains would be less if U.S. Dollar strength leads GBP/USD to decisively give up the 1.38 level.

Next week’s decision will also afford the RBA its first formal opportunity to comment on the recent evolution of market expectations for its record low 0.10% cash rate, which have seen investors betting increasingly over the last month or so that the benchmark could be lifted by late 2022.

The RBA has so-far said its cash rate will not rise from that level “at least until 2024” and now that renewed renewed restrictions on business and social contact are threatening to deal a fresh setback to a job market that had just seen unemployment return to its pre-pandemic low, the bank might now feel compelled to reiterate and assure of its ongoing support for the economy.

“AUD/USD faces two downside risks in the next few days if a solid US non‑farm payrolls report tomorrow can lead to an upward revision to US interest rate expectations in favour of broad USD strength and the RBA maintains its ultra‑dovish stance at next Tuesday’s meeting,” says Elias Haddad, a strategist at Commonwealth Bank of Australia. 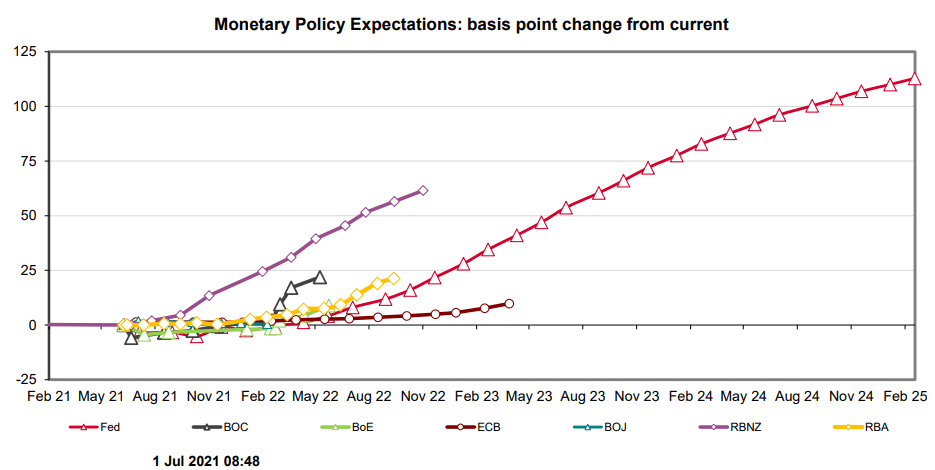 If the RBA reiterates next Tuesday its now-longstanding position that borrowing costs and interest returns to creditors are unlikely to go anywhere for years yet the bank would all but rule out the 2022 interest rate rise that pricing in overnight-index-swap markets implies investors are banking, and this could have downside implications for an Australian Dollar that was already the fourth worst performing ‘G10’ currency of the year so far.

Australian Dollar declines that weigh on AUD/USD would be supportive of GBP/AUD as the latter always closely reflects the relative performance of the former and the main Sterling exchange rate GBP/USD, which doesn’t face the same central bank burden that the Aussie does.

“We continue to doubt that sterling's rally will get back on track, and expect GBP/USD to ease to around $1.35 by the end of this year,” says Samuel Tombs, chief UK economist at Pantheon Macroeconomics, in a recent note. “In order for sterling to rise further this year, it must become the conventional wisdom that the MPC will hike sooner and/or further than the U.S. Fed. Such a development seems highly unlikely.”

The Pound has itself underperformed many other currencies since late last month when the Bank of England (BoE) noted in minutes of June’s meeting that it would be important to avoid the kind of “unwarranted tightening of financial conditions” that could arise from misplaced speculation about any prospect of an interest rate rise any time soon, even after observing a better-than-expected performance from the UK economy in recent months. 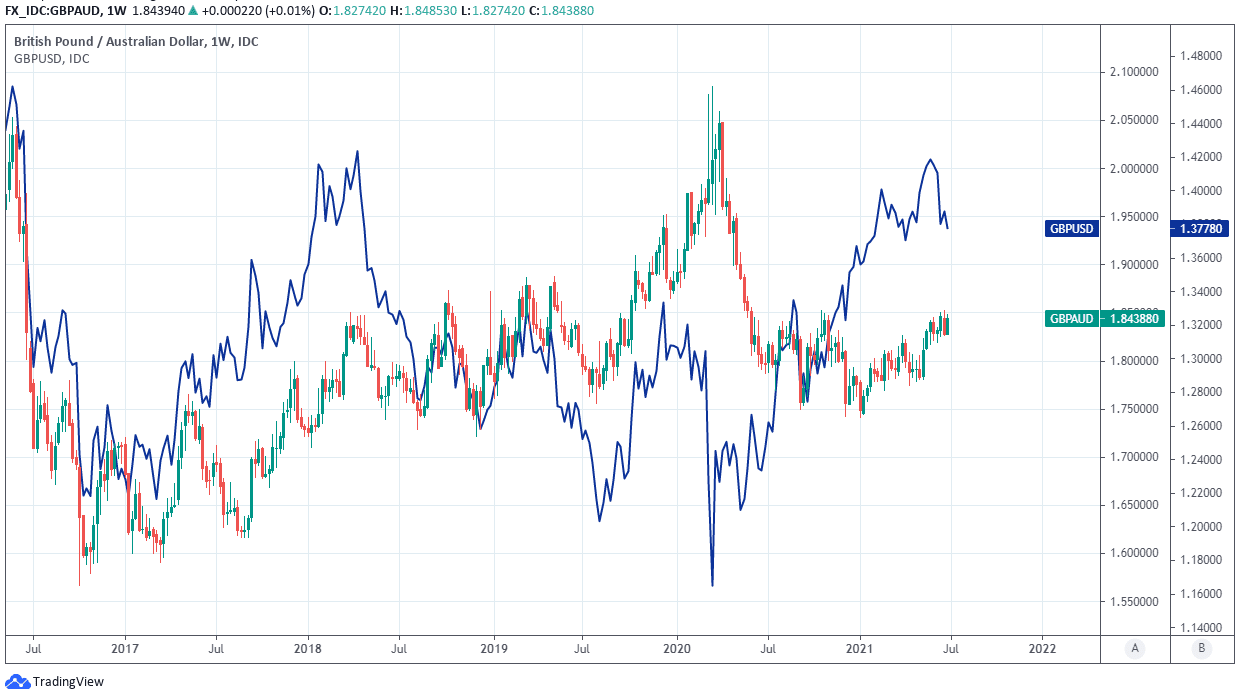 Above: Pound-to-Australian Dollar rate shown at weekly intervals alongside GBP/USD.

The Pound-to-Australian Dollar rate has edged higher nonetheless, and for obvious reasons too given that despite the BoE ruling out interest rate rises any time, the UK’s central bank is still tiptoeing its way toward ending its crisis-inspired quantitative easing programme later this year.

“The BoE and RBA both have their key rates at 0.1% but markets price about a 50% chance of the BoE hiking by Aug 2022, keeping the 2 year spread in sterling’s favour,” Westpac’s Callow says.

Australia’s central bank is, on the other hand, widely expected to announce a value top up and duration extension of its own government bond buying programme next week and some influential economists have suggested that it may not actually get as far as even beginning to reduce its weekly purchase rate until year-end or after which makes for a clear divergence between the RBA and BoE.

“We think the Board will be committed to maintaining the current pace of purchase ($5 billion per week) until late in the year (around the December Board meeting),” writes Bill Evans, Westpac’s chief economist, in a note this week.

“While there will be no clear assurances next Tuesday, we expect that the RBA will be aiming at timing its tapering of the program for the new year – we expect the FED to announce its taper in September with a view to beginning the taper in January. We expect both central banks will have completed their purchase programs by mid-year,” Evans says.