The Pound has reached a new seven-month high against the Australian Dollar ahead of the weekend, in line with the contents of our news report out 24 hours earlier, amidst a critical break lower in the headline Australian-U.S. Dollar exchange rate (AUD/USD) and a potential turn in price of commodities.

With this in mind, an analyst we follow has today said a break below a key level in the AUD/USD exchange rate is underway and this might potentially open the door to further losses over coming days and weeks.

"The Australian dollar has finally broken below solid support after 16 straight days of closing on the 77-cents handle. A weekly close below 0.7700 would pave the way to a move towards major support below 0.7550," says John Noonan is a Reuters market analyst. 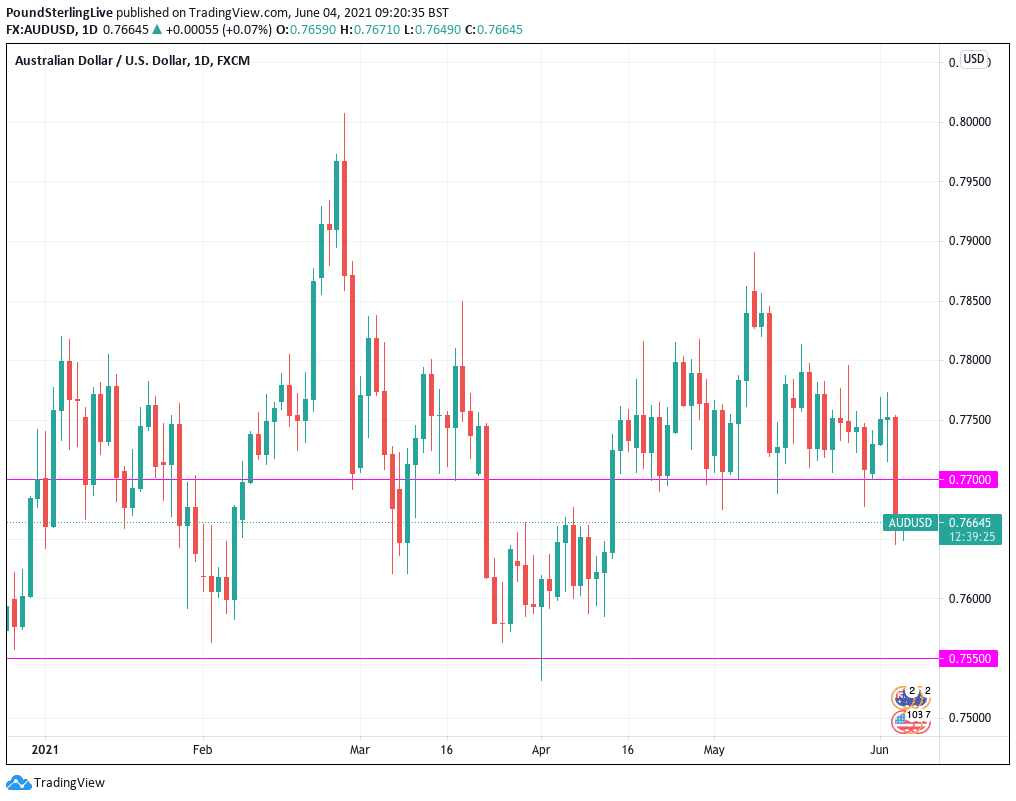 Above: Is the Australian Dollar breaking down? Chart showing key levels identified by Noonan.

The move lower in the AUD/USD exchange rate is meanwhile feeding a move higher in the Pound-to-Australian Dollar exchange rate (GBP/AUD), which has risen to its strongest levels since November 2020 at 1.8428 ahead of the weekend.

The best exchange rate for those selling Pounds to buy Australian Dollars appears to be linked with the breakdown in the AUD/USD exchange rate: to illustrate this point the below chart is of help.

What we have done is invert AUD/USD into USD/AUD, which will give a cleaner analysis when observing the influence this exchange rate is having on the GBP/AUD pair: 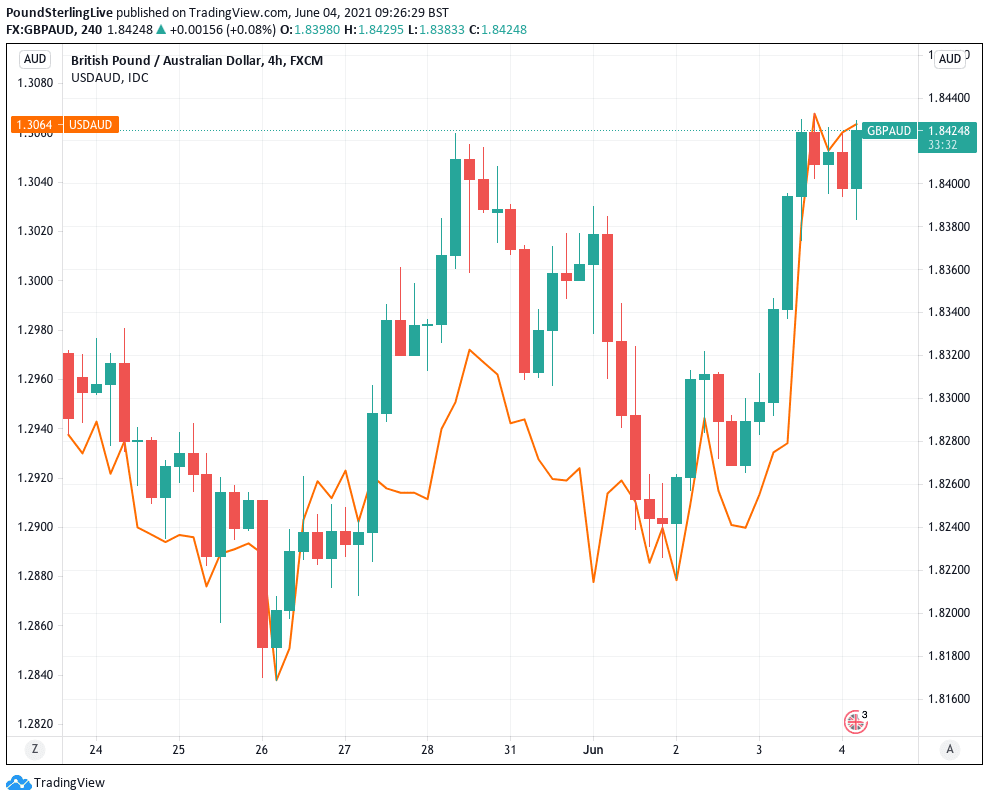 As can be seen it is difficult to disentangle USD/AUD movement from that in GBP/AUD, confirming that for now Sterling is making gains against the Australian Dollar on the back of that AUD/USD exchange rate breakdown and further declines will likely pull GBP/AUD higher.

"The AUD/USD technical outlook has turned bearish. Analysts have been warning of a potential 'head and shoulders' pattern on the AUD/USD charts and the neckline of the formation around 0.7680 broke Thursday," says Noonan.

The technical breakdown in the Australian Dollar market does have its feet in fundamental dynamics impacting on Australia both globally and domestically: on the global front the commodity cycle could be about to turn, on the domestic front the Reserve Bank of Australia (RBA) remains resolutely unsupportive of currency strength.

"The AUD has also benefited from surging metal prices since the start of 2021. Thursday's over 3% fall in London copper futures might be the start of an overdue correction lower in key commodities," says Noonan.

The Australian Dollar is considered a commodity currency owing to Australia's huge raw material endowment, allowing the country to earn significant sums of foreign currency from exports, particularly when commodity prices are high.

Surging commodity prices from mid-2020 through to the current time means Australia's Terms of Trade has improved significantly, with the latest data from the Australian Bureau of Statistics showing Australia's trade balance reached A$8.028BN in April, which is well ahead of the A$7.900BN the market was looking for.

Should the commodity price surge of recent months cool the trade balance surplus could start shrinking and the Australian Dollar might lose support from the commodity narrative. 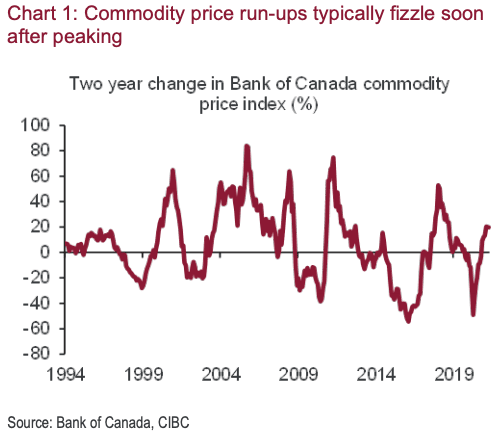 CIBC researchers say in a monthly briefing note they expect the resource price rally to lose steam in 2022, with metal prices expected to hit their peaks at various points in the next 12 months given a moderation in global growth and U.S. homebuilding by 2023.

CIBC Capital Markets are however constructive on the Australian Dollar's outlook, saying they forecast AUD/USD at 0.8000 by the end of the second quarter, the same level reached at end-February.

But their constructive view on the Australian Dollar outlook is "tempered" by a "less bearish USD outlook" on an expected announcement of tapering and consequent firmer U.S. yields which loops back to the earlier discussion on the breakdown in AUD/USD.

"Another is the RBA’s extended accommodative outlook, which we expect to be confirmed at the July meeting," says Bennet.

Pound Sterling Live reported on June 03 that the outlook for the Australian currency could now largely rest with decisions made at the RBA.

The RBA said at its June 01 policy update that it was sticking with its low interest rate environment, judging that the economy is still operating below potential and therefore needed the support that such rates offer.

There were some expectations that the RBA could signal a more optimistic tone on the outlook and hinted that the date of the first interest rate rise from the current 0.1% would need to come forward as a result.

But this was not to be the case with the RBA opting to maintain a cautious tone in light of the view Australia's employment situation is still unacceptable and that central bank support will be required until it improves.

Until the RBA shifts its communication the Australian Dollar could struggle to find strong buying interest.

"The RBA is committed to maintaining highly supportive monetary conditions to support the return to full employment and inflation consistent with the target. It will not increase the cash rate until actual inflation is sustainably within the 2-3% target range," says Georgette Boele, Senior FX Strategist at ABN AMRO.

Boele says the Australian Dollar is likely to only raise interest rates in 2024 based on current guidance and expectations, which puts the rate rise after those expected from the Bank of England and the U.S. Federal Reserve.

In a foreign exchange market putting increased focus on central bank policy differentials, such an outcome could favour the Pound and U.S. Dollar over the Australian Dollar.