The Australian Dollar fell against the Pound, Euro and U.S. Dollar Monday after data out of China disappointed, leading economists to question whether Australia's largest export market was heading for a soft patch.

"The commodity related currencies of the Australian and New Zealand dollars have underperformed overnight following the release of weaker than expected activity data from China for April," says Lee Hardman, Currency Analyst at MUFG.

Data out Monday showed China’s economy slowed in April with industrial production growth easing to 9.8% in April, down from 14.1% in March.

Fixed asset investment slowed to an annual rate of 9.9% in April following growth of 18.3% in March.

"More concerning though was the pullback in household consumption. The annual rate of real retail sales growth slowed to 15.8% in April following growth of 33% in March," says Hardman.

According to estimates, it contracted by 5.0% month-on-month in April following monthly growth of around 8.0% in March.

"So far this year consumption has been disappointing. Slower growth momentum in April poses downside risks to growth forecasts in China although the recovery is expected to continue this year," says Hardman. 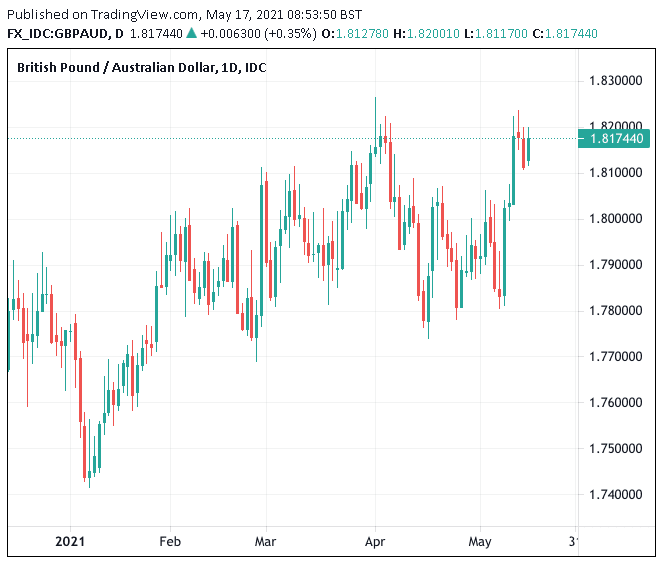 Hardman says Chinese authorities could well consider a fresh round of stimulus over coming weeks if they are to reignite the economic rebound seen since mid-2020.

Chinese economic data matters for the Australian Dollar given the significant demand placed on Australian raw material exports by China. Any slowdown in economic growth in China would likely have knock-on effects for demand of Australian iron ore, coal and natural gas.

The Pound-to-Australian Dollar exchange rate trades at 1.8179 at the time of writing, putting it a whisker away from its highest closing level of 2021 - reached last Wednesday - at 1.8180.

Supporting Australian Dollar valuations for much of 2021 has been the move higher in iron ore prices which had provided a windfall for Australian exporters of the commodity.

But cracks in the commodity's rally emerged last week amidst some sharp declines in iron ore prices, leading to questions of whether the rally was coming to an end.

"A potential extension of the China-led sell-off in iron ore prices next week will be at the centre of market focus, with AUD facing the largest downside risk in G10," says Chris Turner, Global Head of Markets and Regional Head of Research for UK & CEE at ING Bank N.V. 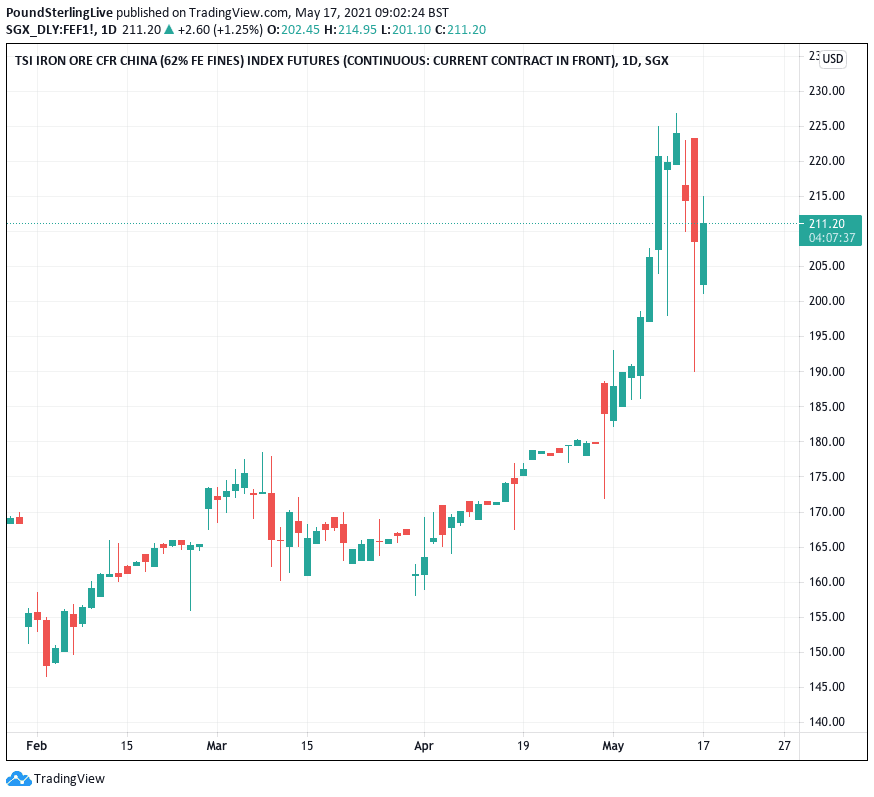 Above: Iron ore prices have come off recent highs.

"A so-far very supporting factor for AUD has rapidly turned into a negative one: iron ore prices experienced a fierce sell-off late this week after China took steps to control the surge in commodity prices," says Turner.

The move follows a mid-week State Council communication that said China will monitor changes in overseas and domestic markets and effectively cope with rising commodity prices.

"We have long highlighted how the levels of iron ore prices looked unsustainable of late: a resilience in Chinese demand inflated them, now any signs that demand could shrink are set to cause sharp drop in prices," says Turner.

"Iron ore is the market to watch for AUD next week," he adds.

On the domestic agenda this week is the April jobs report for Australia, due out on Thursday.

"The recovery in employment should have continued in April, although likely at a lighter pace. Any market impact of the release may be relatively contained considering any hawkish turn by the Reserve Bank of Australia is unlikely to be imminent considering weak inflation,” says Turner.