China - Australia's main export market - said on Thursday it had suspended an economic agreement with Australia; media are reporting the move is a tit-for-tat response to Australia's apparent scrapping of a Belt and Road infrastructure pact.

Australia had earlier this week threatened to undo a commercial deal that saw it lease a Darwin Port to a Chinese company on the basis that it threatened national security.

In response, Chinese media warned just two days ago that "a revocation of the 99-year deal on national security grounds could have serious financial and commercial ramifications".

An Australian parliamentary inquiry last month called for the government to consider revoking the 99-year lease to Landbridge Group.

The move gained momentum after Minister for Defence Peter Dutton confirmed to The Sydney Morning Herald on Sunday that his department was looking into whether Landbridge should relinquish its lease under a set of critical infrastructure laws passed in 2018.

In response China said it was suspending the China-Australia Strategic Economic Dialogue.

"The AU-China relationship continues to worsen, with the upcoming decision on the review of the Darwin port lease by a Chinese company in the spotlight," says Elsa Lignos, Global Head of FX Strategy at RBC Capital Markets.

It marks the latest development in an ongoing deterioration in relations between the two countries which are tightly intertwined in matters of trade.

The move is "based on the current attitude" of the Australian government, China's National Development and Reform Commission said in a statement Thursday, blaming some officials of a "Cold War mindset" and "ideological discrimination".

China will "indefinitely suspend all activities under the framework" of the agreement, the statement added.

The Australian Dollar sank in response to the development, signalling market concerns that exports to the world's second largest economy would be compromised. 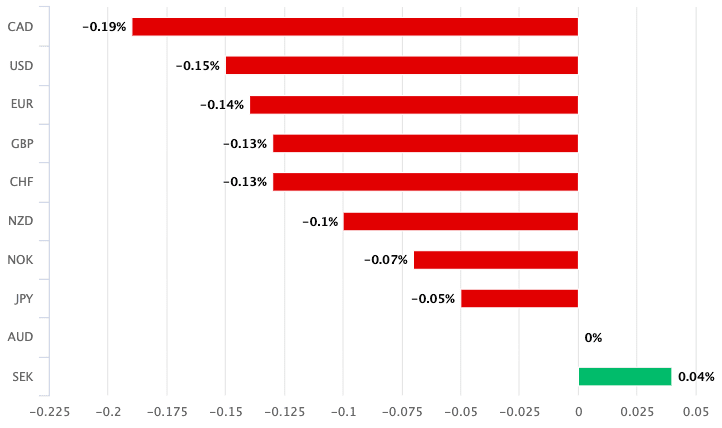 Above: Australia was a laggard in the hours following the news.

Over recent months China has banned or hiked tariffs on a number of Australian imports, but has so far left untouched the mainstay of Australia's export base, which includes iron ore and other raw materials.

"China does not have much alternatives to Australian iron ore exports, not this year or probably even next year, and that is the key trade that is preventing a complete rupture in the relationship," says Lignos.

A concern for the market is that these valuable exports could come under scrutiny in an escalation of tensions between China and Australia.

The Pound-to-Australian Dollar exchange rate (GBP/AUD) rose to a high of 1.8031 in the wake of the news, keeping intact a broadly constructive short-term trade pattern for the pair.

The Euro-to-Australian Dollar exchange rate (EUR/AUD) rose to a high of 1.5575.

Despite the Aussie losing ground to all its major peers, apart from Sweden's Krona, price action in the Australian Dollar and indeed all major currency pairs still remains relatively contained and lasting losses caused by today's developments are unlikely.

This is in keeping with the market's overall lack of direction at present that has lead to tight, sideways ranges being respected.

While political intrigue regarding China and Australia will at times impact the market, Australian Dollar exchange rates are likely to mean-revert in the absence of more fundamental drivers.

Key drivers to watch remain the global investment backdrop which remains broadly supportive of the Australian Dollar, even if markets are struggling to find any real upside traction.

Investors are concerned that the Federal Reserve will soon need to start raising interest rates in anticipation of rising inflation in the U.S., a move which could create headwinds to global growth which inevitably has implications for a commodity exporter like Australia.

Policy settings at the Reserve Bank of Australia meanwhile look uninspiring, with policy makers not yet willing to signal higher rates are in store over coming months.

Until they do, the Aussie will likely struggle to find any real upside impetus.