Pound Sterling rose against many majors on Tuesday while the Australian Dollar underperformed, with price action coming as the U.S. Dollar rose alongside a tentative increase in American government bond yields.

Recent ranges in the major exchange rates suggest GBP/AUD has meaningful support around 1.7850, which is a natural candidate for the floor of GBP/AUD’s envisaged ascending range, and would trade near 1.81 if a creeping underperformance by the Aussie continues to block AUD/USD's attempts at overcoming 0.78.

But there’s plenty of reason for thinking that Aussie Dollar underperformance might endure too.

"The range so far post the meeting has been fairly subdued with trade between 0.7741 and 0.7755. There were a number of tweaks in terms of RBA language from an FX perspective," says Robert Rennie, head of financial market strategy at Westpac, referring to AUD/USD.

The Reserve Bank of Australia (RBA) announced tepid upgrades to its outlook for the economy on Tuesday before leaving its cash rate unchanged at 0.10% and all parameters of its other monetary policy programmes also unaltered, though its statements in relation to the currency were telling.

The RBA continued to note this month that the trade-weighted Australian Dollar is at the higher end of its range from recent years even as it at the same time decided to remove the line in its statement that had previously suggested the bank’s policy was “contributing to a lower exchange rate than otherwise.” 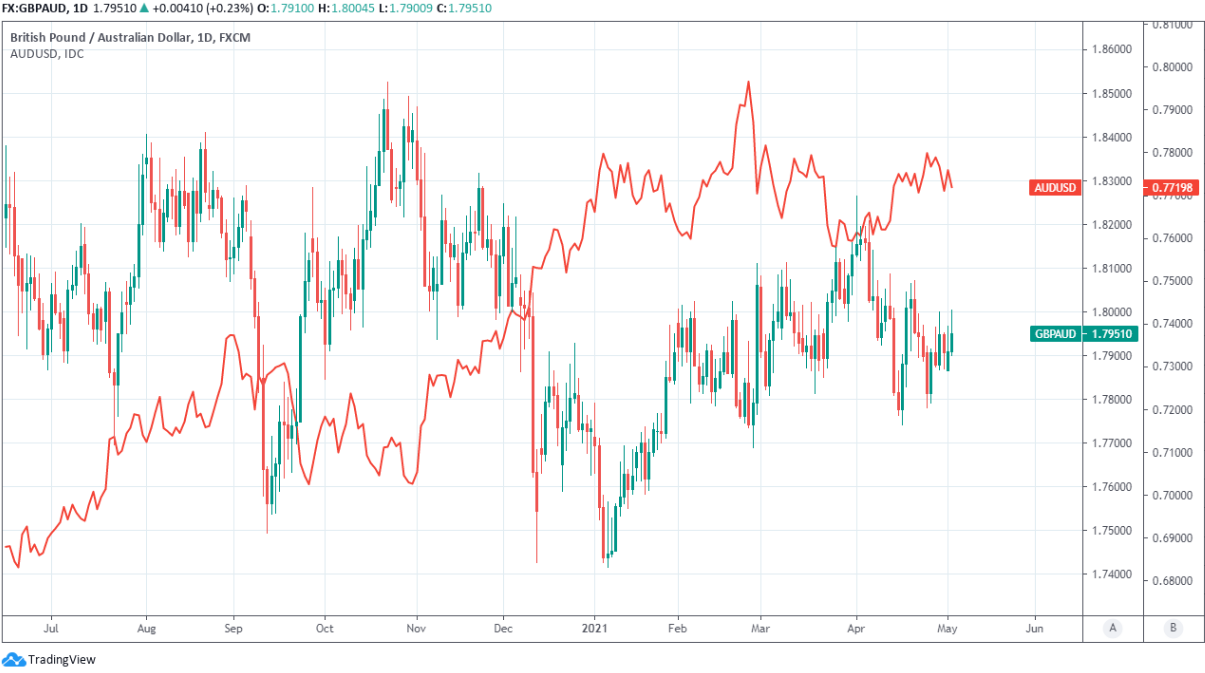 Above: GBP/AUD shown at daily intervals alongside AUD/USD.

Westpac and others have interpreted the RBA’s change in language around the Aussie Dollar as something like “suggesting that commodity prices and the exchange rate are less of a focus for policy right now.”

However, the opposite is very likely the case this author thinks.

The RBA had little choice but to remove the above-referenced line from its monetary policy statement, despite that it has continued to voice concerns about the level of the trade-weighted Australian Dollar, because it appears to have taken to intervening directly in the market.

The RBA would have knowingly peddled a falsity had it repeated the statement suggesting its interest rate and quantitative easing policies were responsible for keeping the Australian Dollar on a leash, which it couldn’t do for obvious reasons, so it’s omission from the statement is not by any means an “all clear” for Aussie Dollar bulls.

“The RBA highlighted that the decision on yield curve control and future bond purchases will be announced at the 6 July Board meeting,” says Elias Haddad, a senior FX strategist at Commonwealth Bank of Australia, referring to this Tuesday’s monetary policy decision by the RBA.

The RBA’s turn to FX interventions was covered here by Pound Sterling Live, and explains why the Aussie could continue to have trouble getting above 0.78 in what would be a supportive outcome for the Pound-to-Australian Dollar rate this week and thereafter.

Readers can find out more about the reasons for the RBA’s interventions here as well as a bit about the possible preconditions for any eventual decision by Governor Philip Lowe and colleagues to put away their cannons, although what matters most in all of this is the bank’s long-term struggle to deliver a 2%-to-3% inflation target.

“The encouraging global growth outlook combined with Australia’s favourable balance of payments backdrop and undervalued exchange rate suggest AUD/USD has room to rally towards 0.8200. However, relative monetary policy trends between the Fed and RBA means the AUD/USD uptrend will be choppy,” CBA’s Haddad says. 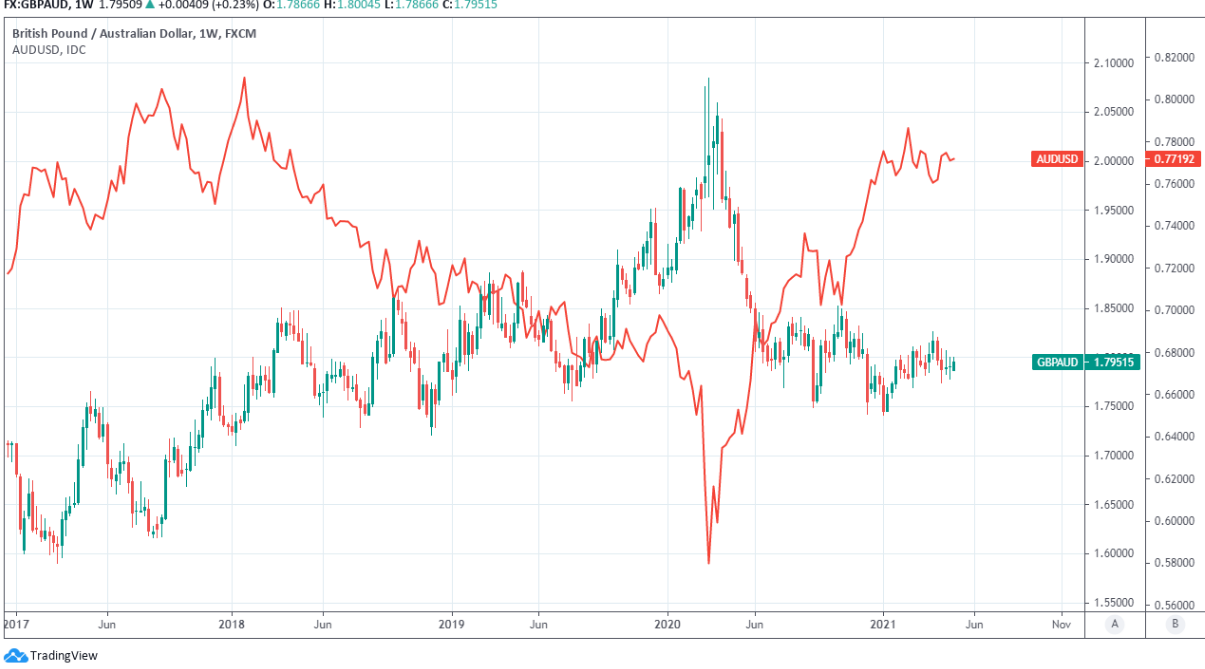 Above: GBP/AUD shown at weekly intervals with AUD/USD.

Readers may have been amused, bemused or perhaps even aghast to see earlier on this page a suggestion of outperformance by Sterling and rising GBP/AUD for the weeks ahead.

After all; Australia’s Dollar is a commodity currency offering a ‘high beta’ exposure to an anticipated global economic recovery and as the analyst community has often remarked, some raw materials prices by half and in the process magnified what was already a noteworthy perceived “undervaluation” of the Aussie.

As a result, some commercial bank financial models estimate that this “fair value” is a country mile north of the distant 0.80 threshold in AUD/USD, although it matters that if the RBA was to allow the Aussie to close the gap by rising to those levels then the bank would risk seeing its inflation target go up in smoke.

It’s inflation targets which matter first and foremost to the vast majority of central banks, who are much less concerned about “fair value” for asset prices than they are with delivering targeted levels of inflation, and it just so happens that rising exchange rates subsidise imports and can as a result weigh on the consumer price index.

The RBA and others have cut interest rates to zero and provided unprecedented levels of monetary support to economies in the hope of lifting inflation back toward desired levels over the coming years, while the RBA at least and evidently wasn't going to just sit back as the speculative corner of the FX market tramples over its target.

This is very supportive of the Pound-to-Australian Dollar rate trend although much about the outlook from Sterling’s side still depends on the outcome of Thursday’s Bank of England policy decision. 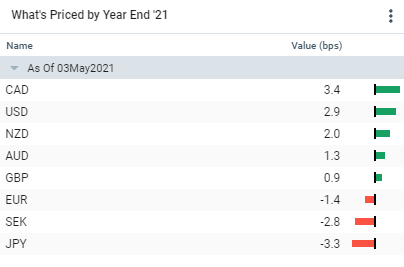 Governor Andrew Bailey and colleagues will set out their latest views on the UK economy’s current condition and its prospects going forward, although Sterling and investors will be most interested in details about the outlook for inflation and the likely timing of any eventual decision to begin lifting interest rates.

The UK economy has had less trouble delivering the required levels of inflation over recent years than many others have and it’s widely accepted as a contender to lead the major economies in recovery this year thanks to vaccination-induced head-start in reopening.

Meanwhile, pricing in interest rate derivative markets suggests this week that investors still somewhat inexplicably think the RBA and a whole bunch of other central banks are likely to lift their interest rates before the BoE.

That offers amusement value as well as implies that Sterling and GBP/AUD would have scope to rise over the coming weeks if any of the BoE’s Thursday statements lead investors to doubt those particular assumptions.

The BoE decision is out at 12:00 on Thursday and is the highlight of the week for the Pound.