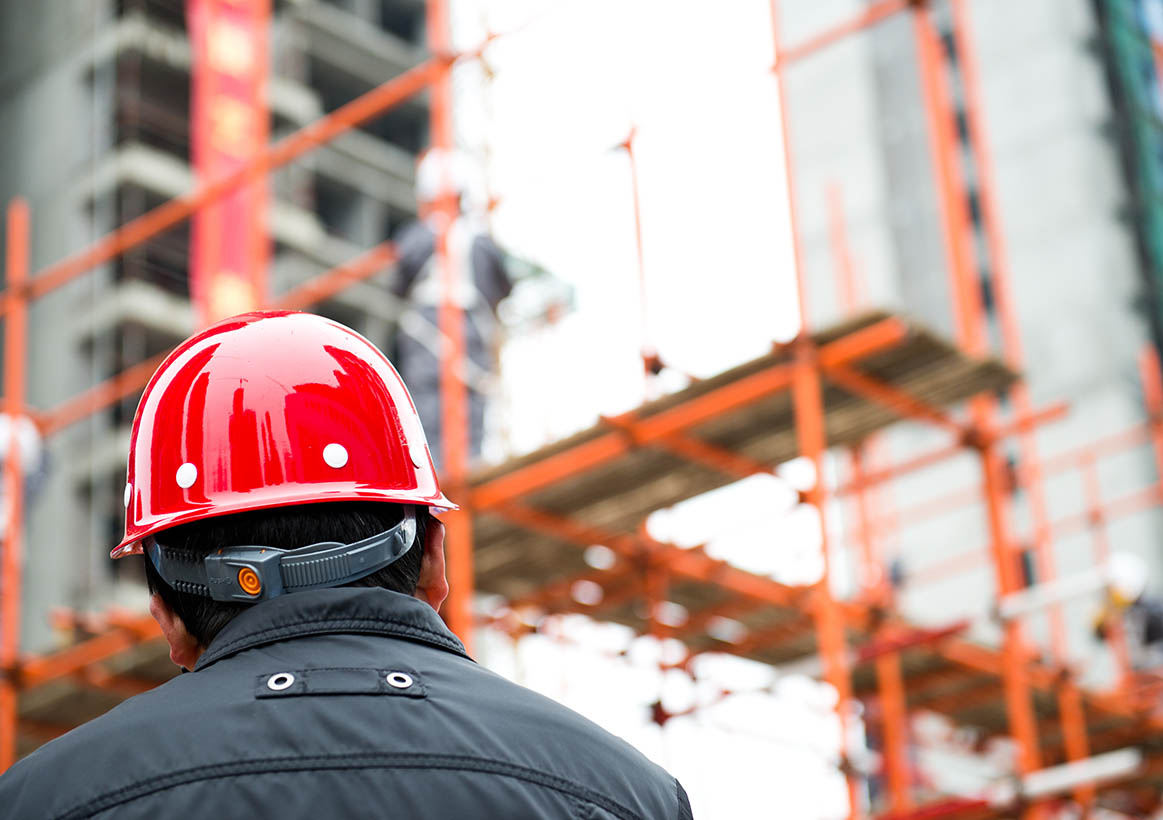 The Australian Dollar is the best performing major currency of the past week with gains appearing to correlate with an uninterrupted six day rally in the value of bulk iron ore futures, confirming the importance of this commodity to Aussie exchange rate dynamics.

Bulk iron ore is Australia's top export and foreign exchange earner and a dip in the commodity's price during January and into early February was mirrored by an underperformance in the Aussie Dollar.

But, this weakness might now be reversing as China returns from their New Year break. 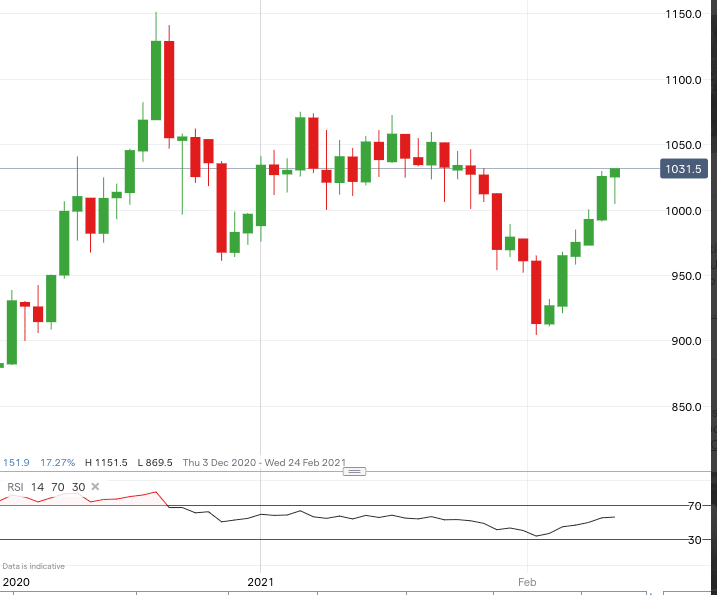 Above: Iron ore futures, data and chart from IG.

The Australian Dollar has tagged along and has advanced by a quarter of a percent against the British Pound in midweek trade, in the process overturning a weekly deficit. In the wake of these gains the Pound-to-Australian Dollar has eased back to 1.7905, having been as high as 1.7964 in the first half of the week.

The Aussie has meanwhile recorded a weekly gain of 0.22% against the U.S. Dollar and a 0.72% gain against the Euro. 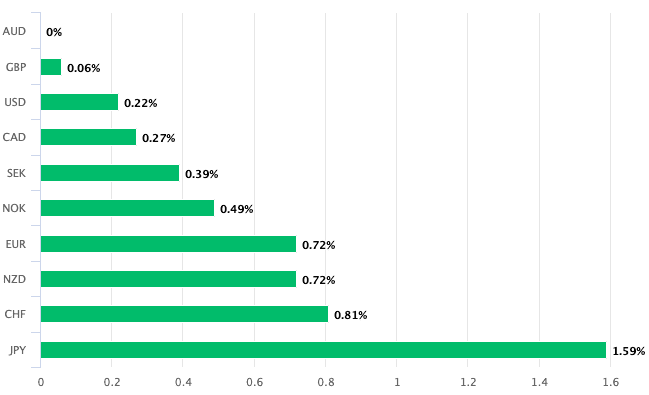 Above: AUD has risen against all its peers in the past week

The correlation between iron ore and the Australian Dollar is something we have been covering for some time now, and we report analysts we follow remain of the view that should iron ore market dynamics remain bullish, the currency will trend higher.

Foreign exchange strategists at UBS have this week told clients they are holding a constructive view of commodity-linked currencies, including the Aussie.

"Higher US yields on the back of larger fiscal deficits and stronger economic activity is likely to come with higher real asset prices as well, and this includes commodity prices. We think this will add fuel to commodity currencies, not just from a terms-of-trade angle, but also from a risk sentiment perspective that comes with stronger economic activity and buoyant risk assets," says Thomas Flurry, a foreign exchange strategist at UBS. 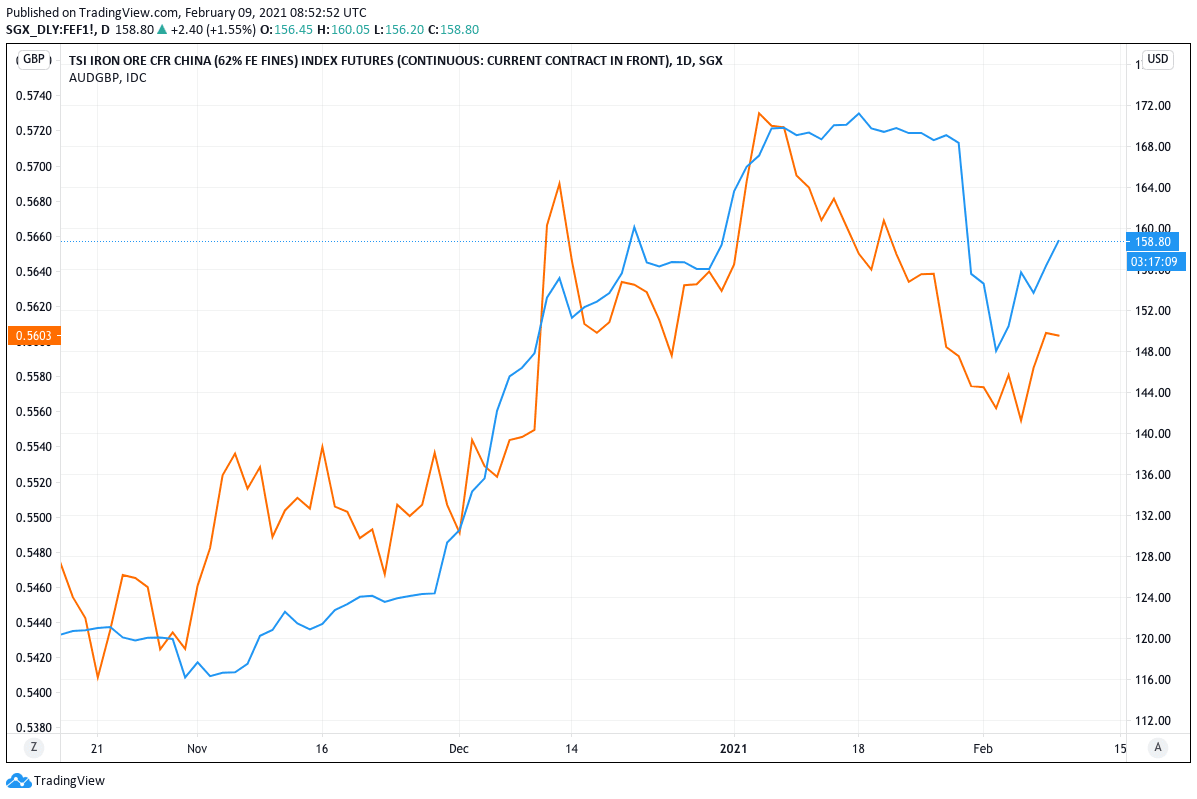 Above: Correlation between iron ore (blue and AUD/GBP).

Flurry is backing further gains in commodity-linked currencies, which includes the Australian Dollar.

"Most commodity-linked currencies have strengthened this year versus the USD and rank among the best performers, led by the NOK, the RUB, the AUD, the CAD and the NZD. We believe there is more upside in store," he adds.

China remains the engine of iron ore demand, meaning dynamics in the world's number-two economy will remain highly influential on iron prices and by extension the Aussie Dollar.

The South China Morning Post recently compiled a list showing the top five infrastructure projects underway and estimate the cost will be in the region of over $130BN.

"The acceleration of these projects has served to set the economy back onto a strong growth path again," says Meyer.

China’s total fixed-asset investment rose to $8TRN in 2020, an increase of 2.9% compared to the previous year and this stimulus has been credited as the demand engine lifting commodity prices, and much will depend on how demand from the world's second-largest economy evolves.

But some additional support to the commodity complex will likely flow through from the rest of the world over coming months as a post-covid recovery starts to build.

"While commodity prices are high, demand has not necessarily kept up, but fiscal expansion is expected to fuel recovery," says Annabel Bishop, an analyst with Investec. "Equities are seen to be experiencing a bull run, and thoughts are turning to whether commodities are in a boom."

An acceleration in the U.S. economic recovery owing to President Joe Biden's commitment to a generous fiscal support package could stimulate demand further.

U.S. Treasury Secretary Janet Yellen advocated for even more fiscal support in G7 countries when she told lawmakers "the time to go big is now".

The global economy is expected to recover rapidly as vaccines are rolled out, allowing developed economies to embark on sizeable recoveries, "bringing more demand into the commodity price equation," says Bishop.

Research by Investec shows the dip in commodity prices to mid-2020 will allow the trend of appreciation in 2021 to extend as a statistically driven base effect plays out.

This technical dividend should yield gains for the commodity complex through to June this year, the research shows.

Indeed, even if commodity prices cease lifting each month, on a no change month-on-month the Economist commodities price index would be 61% up y/y in June.

"While a commodity boom is certainly building, sustainability and so potentially actualisation, will depend on global demand for commodities. However, a lengthy commodity super-cycle is currently unlikely, while positive market sentiment cannot be relied on to persist indefinitely," says Bishop.