- GBP/AUD sees winning streak broken
- But momentum continues to favour Sterling
- Could go as high as 1.9034

Pound Sterling has seen its winning run against the Australian Dollar come to an end following Tuesday's 0.66% decline, however momentum in the GBP/AUD exchange rate remains positive and advocates for further advances by Sterling according to a study of the pair.

GBP/AUD is quoted at 1.8207 in mid-week trade, having been as high as 1.8405 earlier in the week following an unbroken run of 8 consecutive days of gains. According to Trading Central - a technical analysis provider and specialist - the momentum provided by the recent move higher means further gains are likely, but only as long as the exchange rate remains above 1.7987.

"The upside prevails as long as 1.7987 is support," says Trading Central.

1.7987 is seen to be acting as a pivot and a breach below here could flip the market into a short-term downtrend and restart the losses witnessed in the April-June period.

Under such a reversal in fortunes Trading Central are eyeing declines to 1.7627 and then 1.7413.

However, Sterling's recent run of gains leaves the setup in GBP/AUD as being one conducive to further gains owing to a suite of positive technical indicators. "The RSI is above 50," says Trading Central. "The MACD is positive and above its signal line. The configuration is positive. Moreover, the pair is above its 20 and 50 MAs (respectively at 1.8066 and 1.8124)."

Upside targets identified exist at chart resistance points 1.8818 and then 1.9034. 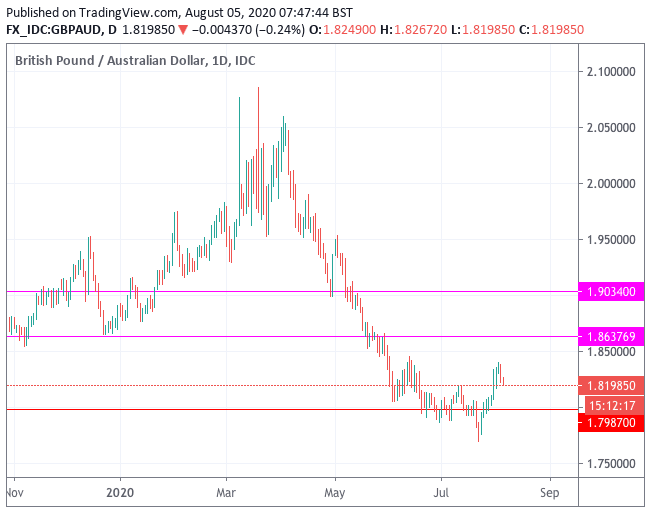 The recent gains in GBP/AUD coincide with a broader setback in the Aussie, with the headline AUD/USD exchange rate topping out at 0.7227 in late July and one analyst says that the currency will require a sizeable rally in global stock markets to reignite its 2020 rally.

"The darling of G10 looks a bit fatigued," says Prashant Newnaha, a foreign exchange strategist at TD Securities, in reference to AUD. "A lot of good news is in the price, so further gains may be more challenging from here without an equity market surge. As we move into the depths of August, and geopolitical risks intensify, we think there may be some profit-taking."

While technicals might advocate for further advances, strategists at RBC Capital Markets are this week calling time on the Pound's rally against the Australian Dollar citing a divergence in sentiment between the Bank of England and Reserve Bank of Australia as a potential catalyst for a move lower.

Conviction on a move lower in GBP/AUD is high enough for Adam Cole, Chief Currency Strategist at RBC, to name selling GBP/AUD his trade of the week.

"We fade GBP’s outperformance last week heading into this week’s BoE announcement and Inflation Report. Although the Bank will acknowledge that the initial rebound in activity from the April trough is somewhat stronger than expected, the focus will be on the risks to activity going forward and permanent damage done in the downturn," says Cole.

The Bank of England meets on Thursday and it appears foreign exchange markets are particularly interested in hearing the Bank's latest views on cutting interest rates further. While no major policy announcement is due to be made, the communication on the next steps are what will likely move markets.

Expectations are elevated that further quantitative easing, and a potential rate cut, will be delivered by the Bank before year-end, aimed at helping the economy recover but which could add further downside pressure on the Pound.

This contrasts to Australia where the Reserve Bank of Australia is unlikely to announce any further significant monetary policy changes, instead policy makers are expected to maintain a current policy of ensuring yields on Australian government bonds stay around the 0.25% marker.

In short, the divergence between the RBA and BoE could be one factor that keeps GBP/AUD under pressure over coign weeks and months and therefore muddies the positive GBP/AUD signals coming out of the charts.