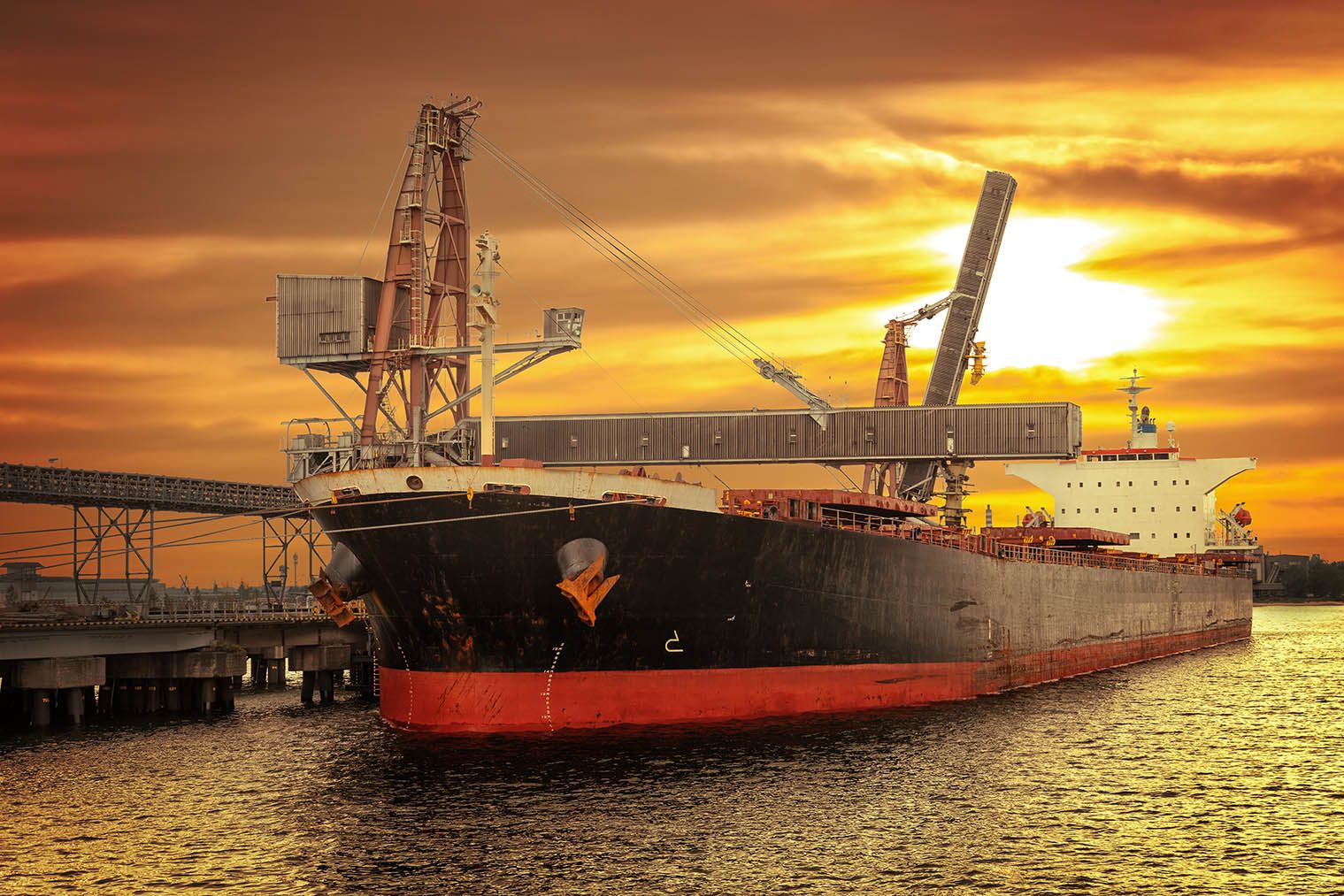 Australia's economy produced its largest quarterly fall in inflation on record for the three months to the end of June, official data revealed on Wednesday, as consumer prices declined by -1.9% and by -0.3% in annualised terms.

"Likely by early next year, stubbornly low inflation and elevated unemployment will push the RBA to do more. But for now we think this inflation print will largely be looked through by the RBA, which had anticipated a negative annual headline inflation print for Q2 and weak core inflation (albeit not as weak as transpired)," says Hayden Dimes, an economist at ANZ.

This was in a quarter where the decline in GDP is expected to have outstripped anything seen before by the antipodean economy, although data for the period will not be available until early September, but if the local coronavirus situation is anything to go by things could get worse still in the months ahead. 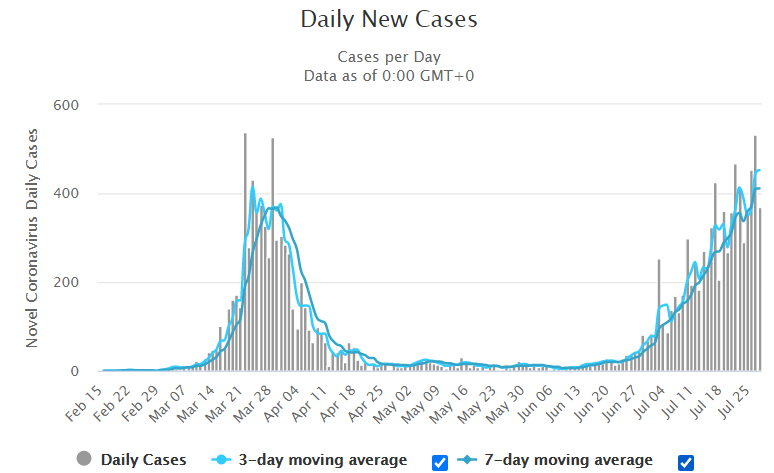 Australia reported 369 new coronavirus infections on July 28, lifting the total to 15,580 from just 7,920 on July 01, while Queensland authorities closed the local border to those coming from Sydney in the state of New South Wales.

The anitpodean country is one of a number experiencing second wave outbreaks that have led new restrictions on movement and activity to be imposed, which risk holding back third quarter economic recoveries.

The Aussie was troubled only momentarily before again privoting onto its front foot in the European session as gold prices found their feet and investors looked ahead to the July Fed policy statement. Currencies and other markets have appeared to largely ignore the still growing pandemic of late.

"A dovish FOMC statement and/or press conference can push AUD/USD up to 0.72," says Joseph Capurso at Commonwealth Bank of Australia. "Given the low level of the USD currently, the risk is the USD lifts after the FOMC meeting because the FOMC is not as dovish as market participants anticipate." 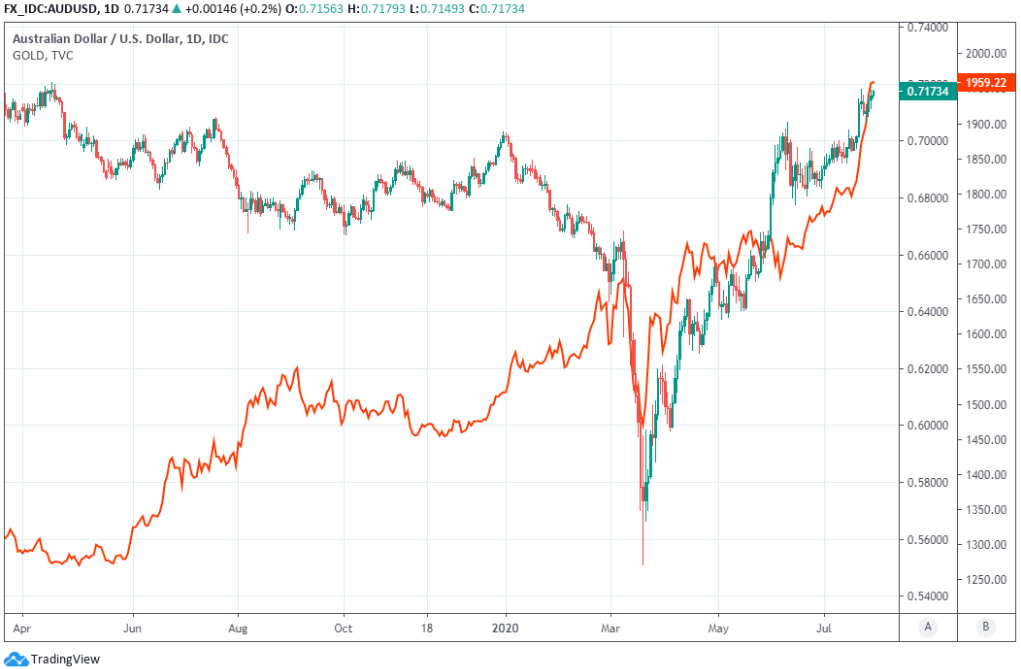 AUD/USD was rising alongside the price of gold and U.S. stock market futures on Wednesday, leading the Aussie to be quoted higher against all major rivals other than the Swedish Krona and Norwegian Krone.

"We would allow for gains to the 55-month moving average at .7284, which we would expect to hold the initial tes We note the 13 count on the daily chart and this is a warning signal. We have a short term uptrend at .7050 and would tighten profit stops to just below here," says Karen Jones, head of technical analysis for currencies, commodities and bonds at Commerzbank. "Spot Gold has reached target of 1983 (top of a 49 year channel), we would tighten stops/consider exiting long positions."

Investors have piled into gold this year and especially since May although gains stepped up this last week as the yellow metal rose more than 7% to leave it sat on a 10% increase for July and 28.5% gain for the 2020 year-to-date. This has lifted the Australian Dollar because with the tourism industry shuttered, precious metals are now estimated to be Australia's fifth largest export.

"Concerns over rising inflation have seen investors pile into the precious metals. However, the recent slump in the USD has supercharged investor demand,"  says Catherine Birch, an economist at ANZ. "FOMC policy will be key today with a bias towards a weaker dollar and iproving risk appetite."

Rising gold prices are an additional tailwind for the antipodean currency, which had already been boosted by gains in iron ore, but Wednesday's Federal Reserve decision now looms over both precious metals and the Aussie. 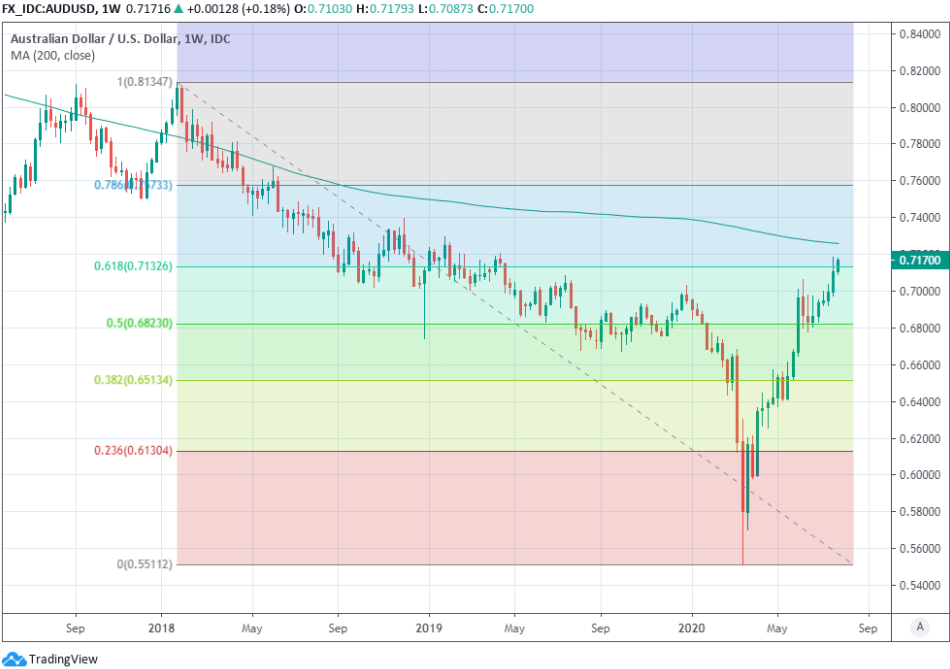 Above: AUD/USD shown at weekly intervals with Fibonacci retracements of 2018 fall and 200-week moving-average (green).

"On Tuesday, the Fed said it is extending its lending programs to businesses, governments and individuals to the end of 2020," says Quek Ser Leang, a strategist at UOB. "Upward momentum has deteriorated considerably and any advance in AUD from here is likely to be slow and grinding and the major resistance at 0.7200 is still not likely to come into the picture. Overall, AUD is more likely to trade at a slightly higher range of 0.7120/0.7185."

The Fed extended its myriad funding programmes Tuesday so that they run until year-end and said last in June it would continue crushing yields for an unspecified period of time. This commitment, combined with its dual mandate to requiring it to foster maximum sustainable employment and stable 2% inflation, could more or less rule out a winding down of its support for the economy until the U.S. is well on the way back to full employment. '

"The market expects for Fed Chair Powell to send a strong and significant dovish message at this week’s meeting and there is speculation that further accommodative policies could be announced," says Richard Franulovich, head of FX strategy at Westpac. "Risk appetite has far and away been the key driver of AUD prospects - and should continue to sustain AUD - but Australia’s status as an early Covid-19 containment leader has also been part of the bullish narrative on key crosses such as AUD/NZD and AUD/EUR. Local data in coming weeks is likely to portray an economy whose rebound has stumbled."

U.S. policymakers have launched an unlimited quantitative easing programme this year, creating new money to buy up not only federal and local government bonds but also coprorate debt including that which is rated below 'investment grade. But since then the U.S. containment of the coronavirus has fallen apart and the recovery of the world's largest economy has become imperilled, which leaves market expectations for Wednesday's announcement as well as the Fed's likely course of action shrouded in uncertainty.

Additional policy action from the Fed that weighs on U.S. bond yields and, or, stokes further debasement fears could encourage a further unravelling of the U.S. greenback as well as an extension of the rallies in the Australian Dollar and gold. But as CBA has flagged, already steep losses could mean the U.S. Dollar is liable for a rebound in the event the Fed does nothing on Wednesday, which would leave AUD/USD vulnerable.