The Australian Dollar steadied Thursday after being shaken by further evidence that a second wave of coronavirus infections is sweeping  across the U.S., but stability may not last for long because the antipodean currency is being tipped by some analysts for a correction in July.

Australia's Dollar was steadying with risk appetite in the European morning Thursday but investor sentiment is increasingly fragile amid growing evidence that a second wave of coronavirus infections is sweeping the U.S. and as mulitple pockets of geopolitical tension simmer in the background.

"It seems we have reached a crossroads in the Covid-19 crisis. With new local cases popping up again in a number of countries and the US still very much in the first wave, pressure on governments to impose new or extend current lockdowns is building," says Jeroen Blokland, a multi-asset portfolio manager at Robeco, an investment firm with €171bn under management in 2019.

The U.S. recorded what was its second highest daily total of new infections on Wednesday as outbreaks in Arizona, South Carolina, Florida, Utah and others saw authorities in New York, New Jersey and Connecticut impose 14-day quarantines on travellers from some parts of the country.

"The rate of increase is rising rapidly, but even at the current pace, the U.S. will see 100K new cases per day by July 8, two days earlier than we previously estimated. The 7-day moving average number of new cases has risen in 35 states over the past week. Most of the increase is in the South and West," says Ian Shepherdson, chief economist at Pantheon Macroeconomics.

Meanwhile, Australia also saw a pickup in infections that sent authorities scrambling to test locals in some suburbs of Victoria, the country's second most populous state, although local analysts are sanguine about the numbers. 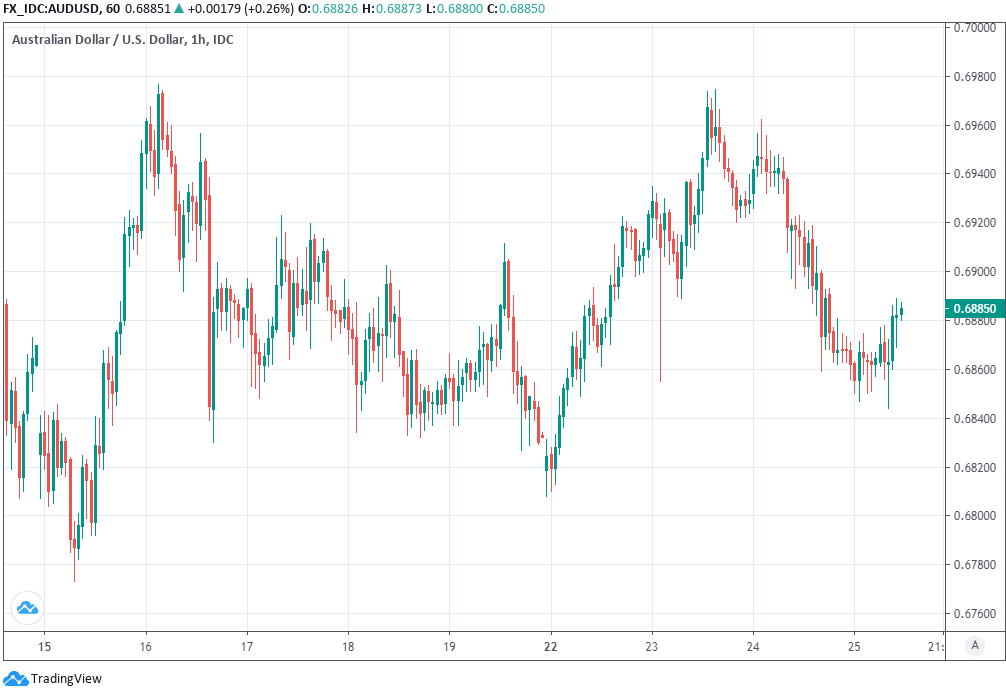 "AUD underperformed amidst weaker equity markets and greater concern about infection rates. Australia recorded the largest number of infections since April. But at around 40, new infection rates are a long way from dire," says Joseph Capurso, a strategist at Commonwealth Bank of Australia. "We retain our view AUD/USD will consolidate in the next few months after its v‑shaped recovery."

Geopolitical risks appeared to build when Reuters reported Wednesday that U.S. defence officials have determined that Huawei, China Mobile, China Telecom and a number of the world's second largest economy's industrial jewels are controlled by the Chinese military.

Designation as such has no immediate legal consequences but does give President Donald Trump political cover for an ongoing effort to effectively push China out of the market for 5G and a range of other technologies.

That Trumpian campaign drew in Poland Wednesday when the "two leaders agreed to do more and work closely with international partners to protect global telecommunications infrastructure in the 5G era," according to a White House read out of a meeting between Trump and Polish President Andrzej Duda.

This was after U.S. trade officials began sharpening their knives with one eye on Europe including the UK on Wednesday when proposing new and higher duties for a range of different products as redress for state aid given to Airbus.

Tariffs result from a World Trade Organization ruling but the rotation of targeted products comes as a prelude to a possible spat over the EU's digital services tax.

U.S. authorities opened a section 301 investigation into the matter less than a week after European Commission chief executive Ursula Von der Leyen included the tax proposals in her 'Next Generation EU' budget plan. Digital levies would see technology companies over a certain size hit by turnover taxes that might come in addition to any profit taxes, which would be a disproportionate burden for the U.S. given American success in technology.

In 2019 the White House threatened tariffs for French goods if the Eurozone's second largest economy went ahead with its own version of the tax. 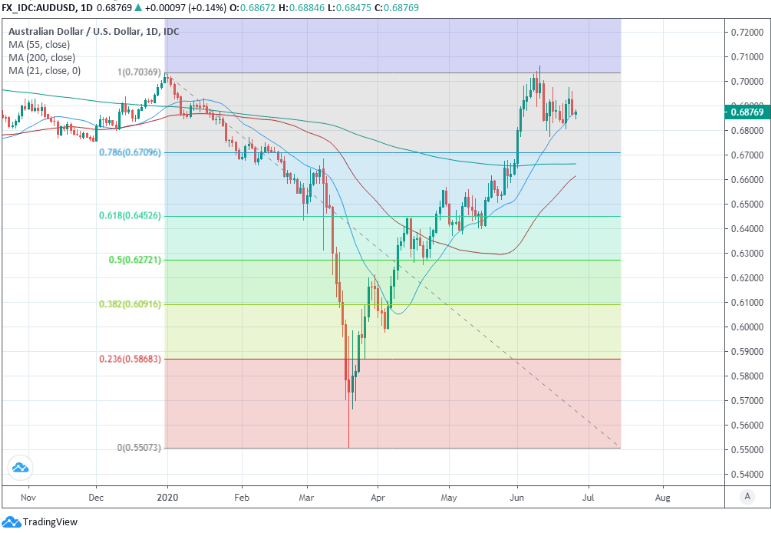 Above: AUD/USD rate shown at daily intervals with Fibonacci retracements of 2020 downtrend.

Tariffs came a step closer with the opening of a section 301 investigation, which would enable the White House to retaliate by executive action and with tariffs of its own if the investigation's findings are favourable for Trump.

"AUD/USD remains vulnerable to a deeper correction," says Paul Ciana, chief technical strategist at BofA Global Research. "We favor tactically bearish AUD/USD trades especially in the .6850-.70 area as the 200d at .6666 and/or the 38.2% retracement at .6470 could be seen."

BofA Global Research has been a staunch sceptic of the recovery rally that dragged stock markets and positively correlated risk currencies like the Aussie higher from late March onward.

The bank has argued that markets are too optimistic about containment of the virus and the pace of the subsequent recovery, fearing the bounceback will be a slow and drawn out affair that lifts the U.S. Dollar again.

BofA's technical strategists have advocated selling the AUD/USD rate next time it approaches 0.70, which it was on course for Thursday, in anticipation of a convergence toward the third-quarter forecast.

The Aussie steadied atop its 21-day moving-average at 0.6878 Thursday, leaving it pointed at the 100% Fibonacci retracement of the 2020 downtrend around 0.7036, which coincides closely with the 127% retracement of the March AUD/USD collapse and amounts to a formidable resistance barrier.

But the above cocktail of virus and trade concerns is set to linger, if not build further, and is part of the reason why fundamental analysts see the Australian Dollar's three-month rally back from March lows being on its last legs ahead of a period of consolidation, or a correction lower.

"What we don't have, and wish we did to increase conviction, is a formal top pattern such as a double top. This is why we preferred to sell into .70 area this month and foresee a July correction," Ciana says. 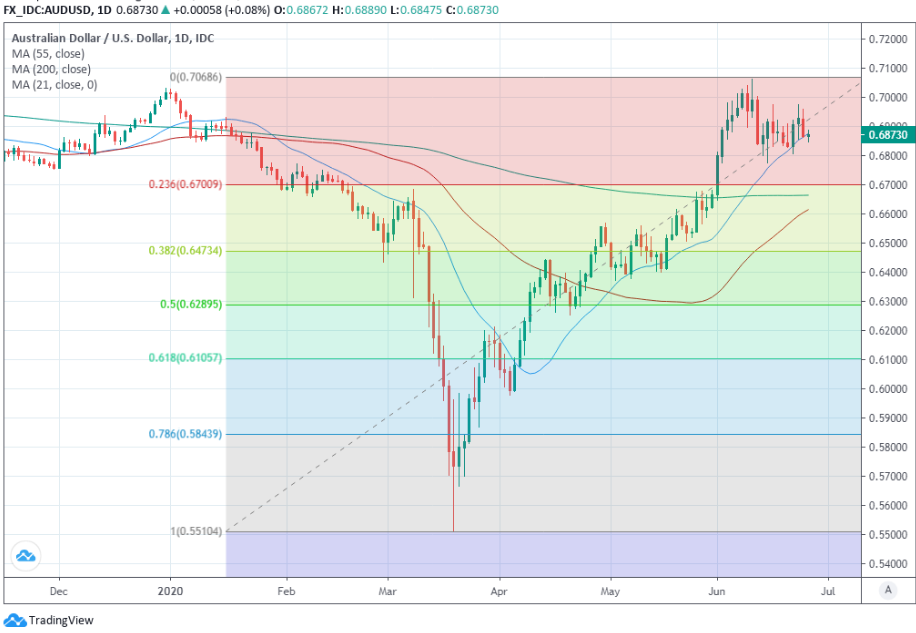 Above: AUD/USD rate shown at daily intervals with Fibonacci retracements of March-to-June recover and selected moving-averages. 200-day average in green with 21-day average in blue.