Achieve 3-5% more currency for your money transfers. Beat your bank's rate by using a specialist FX provider: find out how.

Pound Sterling has now suffered give consecutive weeks of decline against the Australian Dollar and 7 of the past 9 weeks have resulted in losses, confirming momentum in GBP/AUD is resolutely negative and there is little to suggest a turnabout in fortunes.

The Pound-to-Australian Dollar exchange rate is quoted at 1.8138 at the time of writing at the start of the new week, with momentum studies on the daily chart advocating for further losses.

Confirming negative momentum is a Relative Strength Indicator reading that is just below 30; anything below 50 indicates downside momentum is entrenched. Furthermore, the MACD indicator is negative and below its signal line.

"The configuration is negative," says a note from Trading Central, a provider of technical studies and intelligence to the trading community. "Moreover, the pair is trading under both its 20 and 50 MAs (respectively at 1.8743 and 1.9333)".

Trading Central say that unless the GBP/AUD exchange rate can break above 1.8838 once more the downside is likely to prevail. 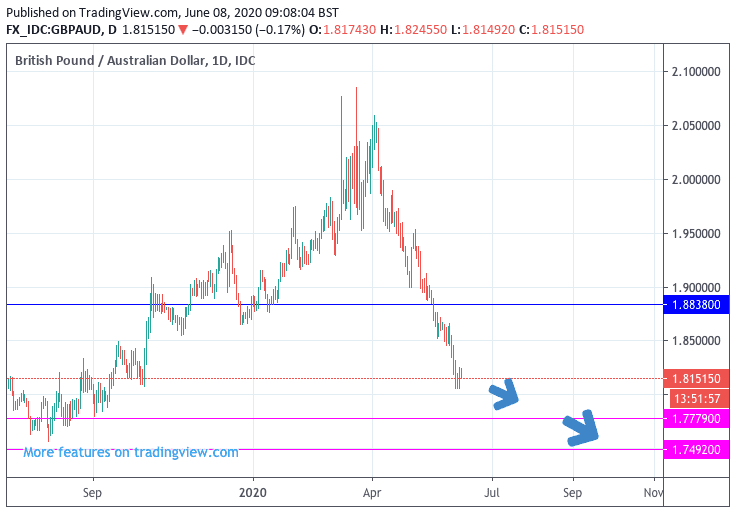 Trading Central have identified two downside targets, based on what they believe to be the next levels of support the market will test out. These are 1.7779 and then 1.7492, as per the above graphic showing where the key levels might lie.

From a fundamental stance the relentless bid of the Aussie Dollar comes courtesy of a firming investor sentiment, with surprisingly positive jobs reports out of the U.S. and Canada on Friday blowing expectations out of the water.

All economists surveyed by Reuters and Bloomberg said they believed the U.S. and Canada would see unemployment increase, yet it grew by a substantial amount in both countries.

"Nonfarm payrolls rose an astonishing 2500k, the highest on record. To say that “no one saw this coming” would be a gross understatement; no one even forecast a rise, let alone a record rise," says Marshall Gittler, Head of Investment Research at BDSwiss Group. "Many people are shouting 'fraud' and 'cooking the books,' which is entirely possible. However, I’d like to point out that Canada’s employment data for May, released at the same time, showed the same pattern. Employment rose by 290k instead of falling by 500k, as expected."

The employment outcomes saw markets rapidly reprice expectations for the shape of the global recovery, believing that the chance of a sharp rebound in activity as economies unlock is now entirely positive.

For the Australian Dollar this is a positive as the currency is one of the most response of the G10's currencies to broader investor sentiment and expectations for global trade.

Rising commodity prices continue to support Australia's terms of trade, which is highly leveraged towards exports of raw materials such as iron, copper and coal to China. As long as sentiment continues to improve we would expect stock markets and commodity prices to continue rallying, which will pull the Aussie Dollar higher in sympathy.

"AUD/USD can continue to break higher this week, supported in part by higher commodity prices and more signs Australia’s economy is on the mend as the economy re‑opens," says  Elias Haddad, FX Strategist at Commonwealth Bank of Australia. "The acceleration in China’s crude steel output is positive for iron ore demand and prices."

Looking at Australia's domestic calendar, it is a quiet one with May business conditions due out on Tuesday and June consumer confidence due on Wednesday; both are expected to show improvement as lockdown measures were gradually unwound.