- GBP underperforms AUD amid USD comeback, tipping GBP/AUD lower.
- After Brexit, BoE and UK vulnerabilities hold back GBP in recovery rally.
- Friday's Brexit update may yet yield compromise but not enough for GBP.
- Other problems weigh on GBP while AUD leads any virus recovery rally.

Four days of declines put Pound Sterling on course for a fifth consecutive weekly loss on Thursday and even as both the British and Australian currencies corrected lower against the U.S. greenback following a concerted rally.

The U.S. Dollar was in comeback mode and higher against all major currencies ahead of the weekend following seven days of declines while Sterling was again found wallowing at the bottom of the major currency bucket behind even the typically riskier and more volatile Australian Dollar.

Sterling had risen against the greenback and some lower-yielding currencies earlier this week but couldn't make inroads against those offering higher yields, which left it a relative underperformer.

Undeperformance has been a constant theme in recent months but also this week and despite reports suggesting that Prime Minister Boris Johnson is on verge of offering European negotiators some compromises in trade negotitations that come to a close Friday.

The Times suggested Tuesday that European officials were anticipating compromises on fisheries access and the so-called level playing field from the British side, which were quickly rebutted by Downing Street but could yet emerge from Friday's update on the negotiations.

However, it's a long way from obvious that a British capitulation which removes the threat of a 'no deal Brexit,' only to replace it with a 'bare bones' free trade agreement, would be enough to boost investor interest in Sterling and especially as it relates to the Aussie. 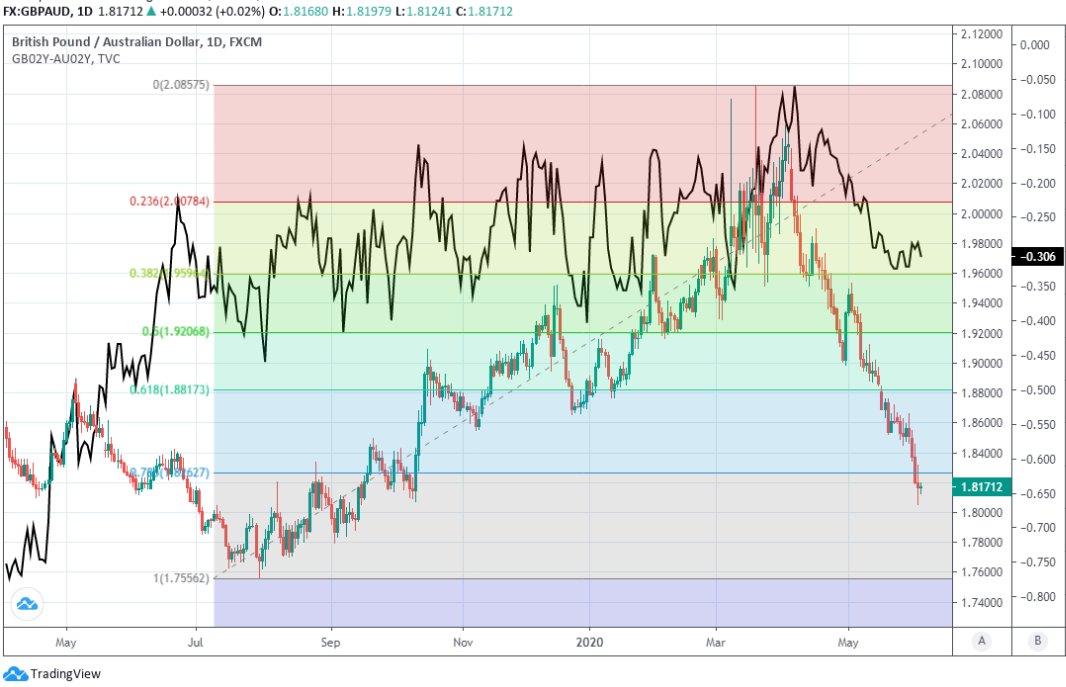 "In March Sterling depreciated significantly as a result of the corona-related uncertainty. As a result the currency should be able to benefit from the improved sentiment. The fact that it is does not do so, or very little, illustrates how pronounced the pressure caused by the Brexit uncertainty seems to be," says Thu Lan Nguyen, an analyst at Commerzbank. "The continued weakness of the GBP spot rate now constitutes a clear sign that investors are getting nervous."

Sterling has been troubled in recent weeks and not only by the coronavirus and sometimes-calamitous government attempts to contain it but also by the Bank of England (BoE), which is increasingly flirting with the idea of a Frankenstein's monster style monetary policy of negative interest rates, but also concerns over the cost of cleaning up after one of the world's worst outbreaks and now the business end of the Brexit process.

Even if a 'no deal' is avoided the UK will still be undergoing a political divorce with a host of its largest trading partners that's never been welcomed by investors and will inevitably lead to lesser market access. Averting an acrimonious exit won't prevent the BoE from crushing yields further by expanding its bond buying programme or turning to negative rates, nor will it fix the public purse. Meanwhile, things are looking up for the antipodeans.

"Strength across stock markets and commodity prices globally amidst hopes of an economic recovery as nations reopen economies has supported the riskier AUD and NZD currencies lately. Both countries have also been very successful in containing the coronavirus compared to other nations as a result of strict border controls in place early doors. While the economic impact has been and will still be painful due to lockdown measures and a reduction in foreign demand, hopes of a speedy resumption of consumption has seen demand for riskier assets soar," says George Vessey, a strategist at Western Union Business Solutions. "GBP/AUD hit a circa 8-month low yesterday but looks poised for a bounce back above A$1.82 today." 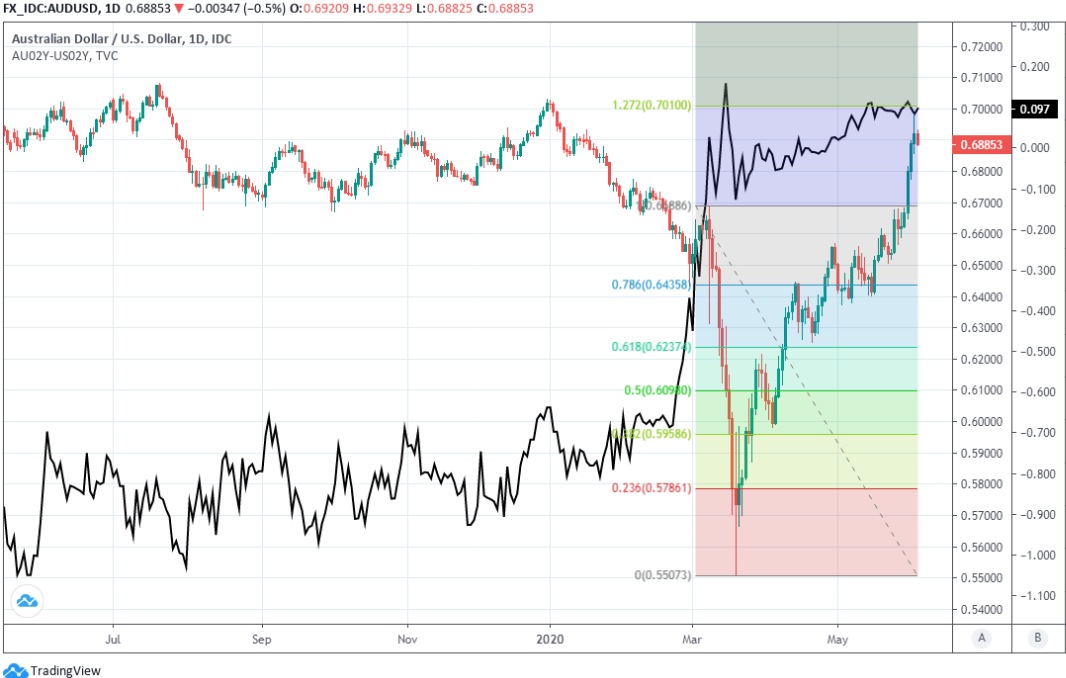 The Aussie was the second best performing major currency last month after rising against all comparable rivals but the Norwegian Krone as investors threw caution to the wind in favour of bidding stock markets and commodities higher in anticipation of a global economic recovery, and to the consternation of many. The Aussie is a commodity currency that has a high 'beta' to proxies for risk appetite so would always have been at the front of the pack in any recovery rally, but its attractiveness has been bolstered by the Reserve Bank of Australia (RBA) after years of being weighed down by policy at the central bank.

The RBA was nearing the end of a rate cutting cycle before the coronavirus came along and the resulting cuts from it as well as the BoE have since lifted the GB-AU bond yield differential to highest Sterling-favourable level for over a decade. But the RBA has been quick to signal that it's done cutting rates and is finished with its government bond buying, while Australia's commodity-centric economy means the bank could be among the first to begin lifting rates in the coming years. The bank struck an optimistic tone this week when confirming that it is effectively in 'wait and see' mode on its monetary policy.

All of this makes for a stark contrast with Sterling that could ensure the Pound-to-Australian Dollar rate remains on the back foot even with any potential Brexit compromises that may or may not emerge from London and Brussels in the weeks ahead. Pound Sterling Live reported last week how in the most extreme scenario the Pound might face -14% downside in the months ahead.

"The recovery in the price of Brent crude oil, which briefly rose above $40 per barrel today, has given a boost to the currencies of the countries whose fortunes depend heavily on oil and other commodities. And if we are right that commodity prices make up more ground as economies reopen, the rally in commodity currencies may have further to go," says Simona Gambarini at Capital Economics. "The pound’s relative weakness probably reflects several factors....the best explanation for sterling’s struggles is probably the fact that the UK’s tricky relationship with the EU has risen back up the agenda over recent weeks. Negotiations around a long-term trade deal to replace the transition period, which is due to end in December this year, appear as fraught as ever."