GBP/AUD trades at 1.9290 at the time of writing, the last time the market traded as high at this level was on the night of Britain's EU referendum of June 23, 2016.

Following the sharp falls suffered by GBP/AUD in the wake of the referendum result, the Pound managed to record a bottom of 1.5652 on October 05. from where it has been steadily recovering.

Since October 2016 GBP/AUD has been engaged in a broad and consistent long-term uptrend: 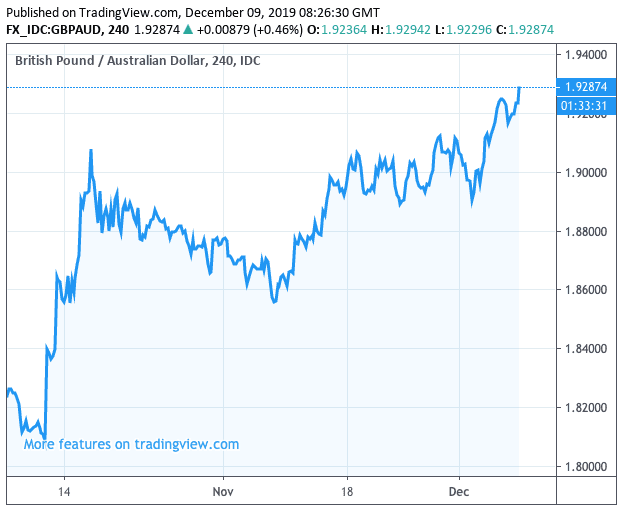 The long-term uptrend remains alive from a technical perspective, and charts advocate for the Pound to continue advancing over coming months, if not years.

Of course within the long-term timeframes we can see significant gains and losses in an exchange rate, and those watching the market to make payments will find the short-term timeframes more instructive.

For GBP/AUD the shorter-term timeframes are currently supportive of further Sterling advances and see us maintain expectations for the Pound to deliver potential upside over coming days: 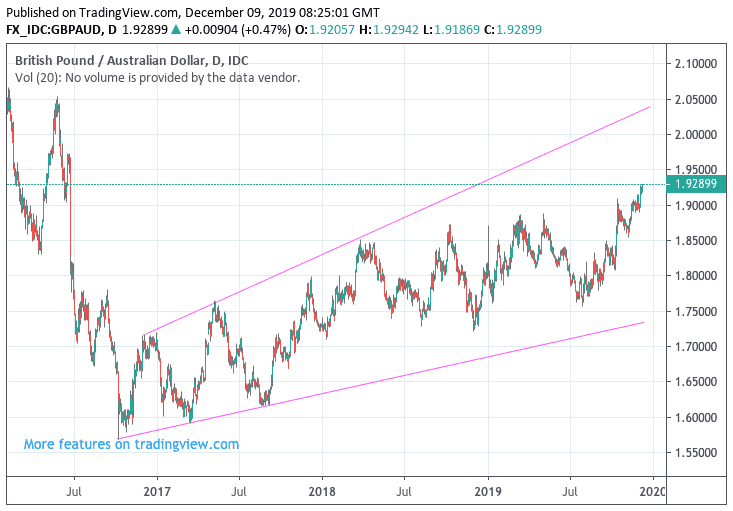 The only potential concern we have is that the Relative Strength Index on the four hour chart - which gives us an overview of the coming week - is reading at 68. For now this is consistent with an uptrend, but a reading of 70 signifies overbought conditions. Typically, an exchange rate will correct lower or consolidate when it reaches overbought conditions, and this is something to watch for in GBP/AUD this week. 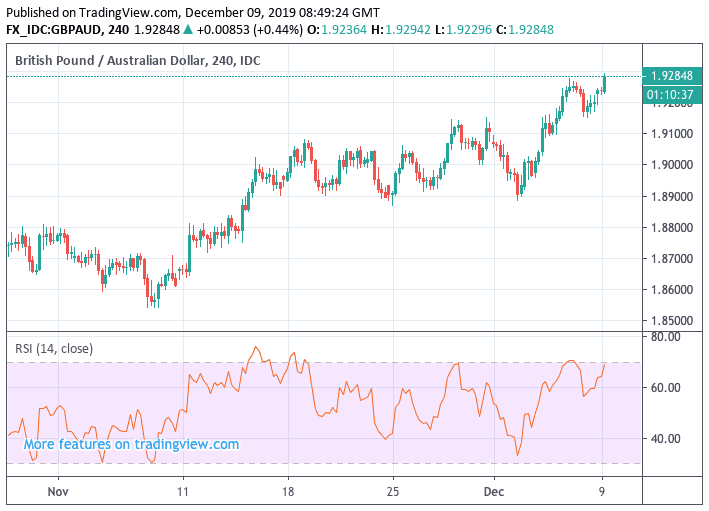 Kim Munday, a strategist at Commonwealth Bank of Australia (CBA) in Sydney, says Sterling will likely be driven by the results of the UK general election this week, which will be announced early Friday morning, London time.

However we would expect the lion's share of the currency reaction to follow the release of the exit poll on Thursday night at 10PM; the exit poll can be expected to give a broad sense of the final outcome, i.e. who the winner will be and whether the winning party has a majority or not.

"Judging from recent polls, the most likely scenario is the Conservative party win majority government. If this scenario pans out, GBP/USD can edge higher towards 1.3500 over the next few weeks as the UK would be on the way towards an orderly Brexit on 31 January 2020," says Mundy.

The analyst adds, "GBP/AUD would increase to a higher three‑year high."

But it's not just against Sterling that the Australian Dollar is being tipped to lose value: the U.S. Dollar has been advancing against the Aussie for some time now, and what happens to AUD/USD could well influence direction of the broader Aussie Dollar.

The AUD/USD exchange rate is quoted at 0.6826 at the time of writing, and "AUD can decline back below its 100‑day moving average of 0.6810 this week against a firm USD," says Mundy.

AUD/USD watchers should beware the risk of a more hawkish Federal Reserve FOMC statement, due following the meeting mid-week, which could fuel further U.S. Dollar upside.

AUD/USD downside pressure could meanwhile be driven by ongoing market expectations for a Reserve Bank of Australia (RBA) rate cut to be delivered as soon as February, which "will continue to keep AUD/USD heavy," says Mundy.

CBA expect the RBA to cut the cash rate by 25bp in February and August 2020, taking the cash rate to 0.25% (the effective lower bound). From here, the RBA has indicted it could even engage in a programme of money printing, known as quantitative easing, in order to boost economic activity and inflation levels.

When a central bank in engaged in an interest rate cuts and quantitative easing cycle the currency they issue tends to fall, as an increase in the flow of money through the financial system suppresses the exchange rate, and it appears this will be the domestic theme weighing on the Aussie for some time yet.