The Australian Dollar starts the new month on the front foot, courtesy of some better-than-expected data out of China overnight.

Both the Australian and New Zealand Dollars were seen outperforming their FX peers after China’s November PMIs were released over the weekend, and all three beat expectations.

The Caixin manufacturing index came in at 51.8, beating market expectations for a reading of 51.5. This is also a three year high, suggesting the Chinese economy might finally be reaching a turning point.

The official manufacturing and non-manufacturing indices also beat expectations, the former rising above 50 for the first time since April.

China is Australia's prime trading partner, and a pick-up in activity in the world's second largest economy therefore bodes well for the Australian outlook.

This has registered on currency markets with the Australian Dollar advancing against the Pound, Euro and U.S. Dollar on Monday.

The Pound-to-Australian Dollar exchange rate is presently quoted at 1.9068, down 0.30% on where it ended on Friday.

The fall also coincides with the exchange rate bumping its head against a notable level of resistance on the charts: we note that 1.9091 was the level GBP/AUD was struggling to advance above, but on Friday the exchange rate finally cracked this resistance as it rallied to its highest levels since the 2016 EU referendum. 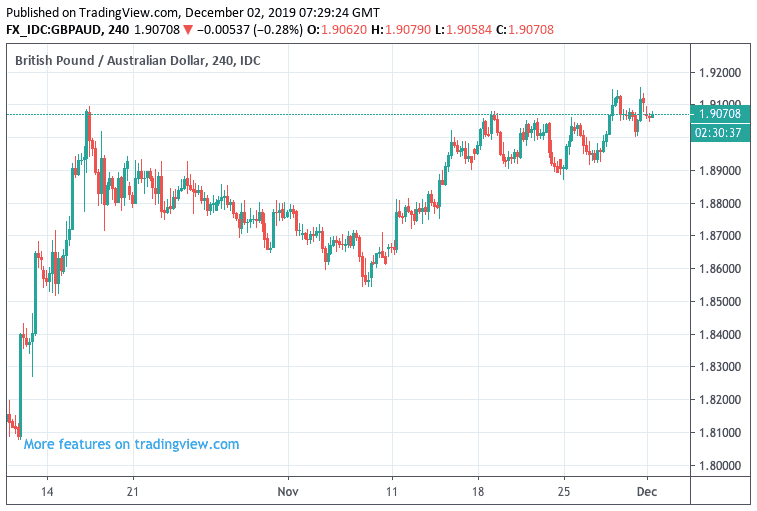 A close above 1.9091 suggested that the door had been potentially opened to a run higher for Sterling. However, Monday's price action - courtesy of the China PMI data - brings this assumption on the rally into doubt, and Sterling could be about to be rejected and perhaps retrace to last week's levels.

Nevertheless, the longer term outlook - that which takes in a multi-week timeframe - remains constructive for Sterling. 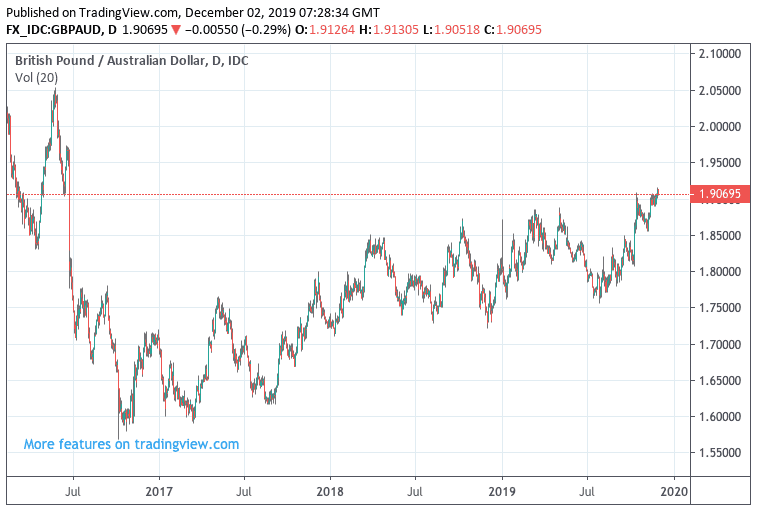 The GBP/AUD exchange rate has been rising since July 30 and there remains little on the medium-term charts that suggest Sterling's uptrend will be radically challenged.

Indeed, we would expect any setbacks in the exchange rate to remain shallow and last perhaps for a few days before the broader lift extends.

With the key China-based data already out of the way, Australian Dollar markets will be eyeing up the Reserve Bank of Australia and the release of GDP data over the course of the remainder of the week.

Markets are currently considering whether the RBA will again cut interest rates in 2020, and if they might even go as far to start printing money to buy up government bonds by introducing a quantitative easing programme.

Both interest rate cuts and quantitative easing would ultimately boost the Australian economy and inflation, but a side-effect would likely be a weaker Australian Dollar in 2020.

With this in mind, the RBA meeting, due at 03:30 GMT on Tuesday will be closely watched.

Economist Chidu Narayanan with Standard Chartered says the RBA is likely to stay on hold in December but cut interest rates twice in the first half of 2020.

The November meeting minutes showed the RBA remains concerned with the trajectory of the Australian economy, based largely on an ongoing deterioration in the country's labour market dynamics.

However, Narayanan says the labour market has not worsened enough to cause the RBA to ease in December.

"While we expect the central bank to stay on hold in December, we see two rate cuts in H1-2020, one each in February and Q2-2020. Governor Lowe indicated the RBA’s openness to ease to 0.25% and also embark on unconventional measures, if needed," says Narayanan referring to the potential for quantitative easing to be introduced.

Standard Chartered expect the RBA to embark on quantitative easing (QE) as the preferred means of easing after hitting the cash rate floor of 0.25%. They say this outcome would only likely occur by end-2020 or later.

On Wednesday, at 00:30 GMT the Australian Bureau of Statistics will release GDP data for the third quarter of 2019.

Markets are expecting a release of 0.5% quarter-on-quarter, unchanged on the previous quarter's reading.

A beat or miss on these expectations could move the Aussie Dollar.