- As AUD retreats in risk-off market, ahead of GDP data.

- But election is a risk to GBP, both before and after vote.

The Pound-to-Australian-Dollar rate hit a fresh post-referendum high Friday and is tipped by some analysts to rise further into year-end, although risks still abound and could yet weigh on the British currency both before and after the eagerly-awaited December 12 general election.

Sterling prospered on Friday, rising against all of its major rivals after being boosted earlier in the week by YouGov projections suggesting Prime Minister Boris Johnson is on course to win a solid majority in next month's election. Meanwhile, the commodity-backed Aussie was lower across the board as investors appeared to shun risk assets. Risk-aversion increased late Friday after Reuters reported the U.S. is weighing regulations that would better restrict Huawei's access to American technology.

Month-end flows and options expiries were also at work on exchange rates although Reuters' report may have stoked fears for U.S.-Chinese relations at the back end of a week where markets were beset with concerns about the ongoing trade talks. 'Risks assets' suffered this week as investors contemplated the impact President Dondald Trump's signing of the Hong Hong Human Rights and Democracy Act might have on the much-vaunted but still-elusive 'phase one deal' to end the trade war between the world's two largest economies.

"Trade talk sentiment has ebbed and waned, with the biggest development being President Trump's signing of a Bill supporting the Hong Kong protesters. That may make reaching even a ‘Phase 1' trade deal between China and the US harder in the near term. Market sentiment on this has spent all week flip-flopping," says Kit Juckes, chief FX strategist at Societe Generale.

As a resource-centric economy and China's top supplier of commodities, Australia and its Dollar have a lot riding on those trade talks. Fragile U.S.-China relations could easily push the Aussie lower next week, although the antipodean currency is also under pressures from a weakening domestic economy, dire outlook for interest rates and a negative technical picture on the charts. 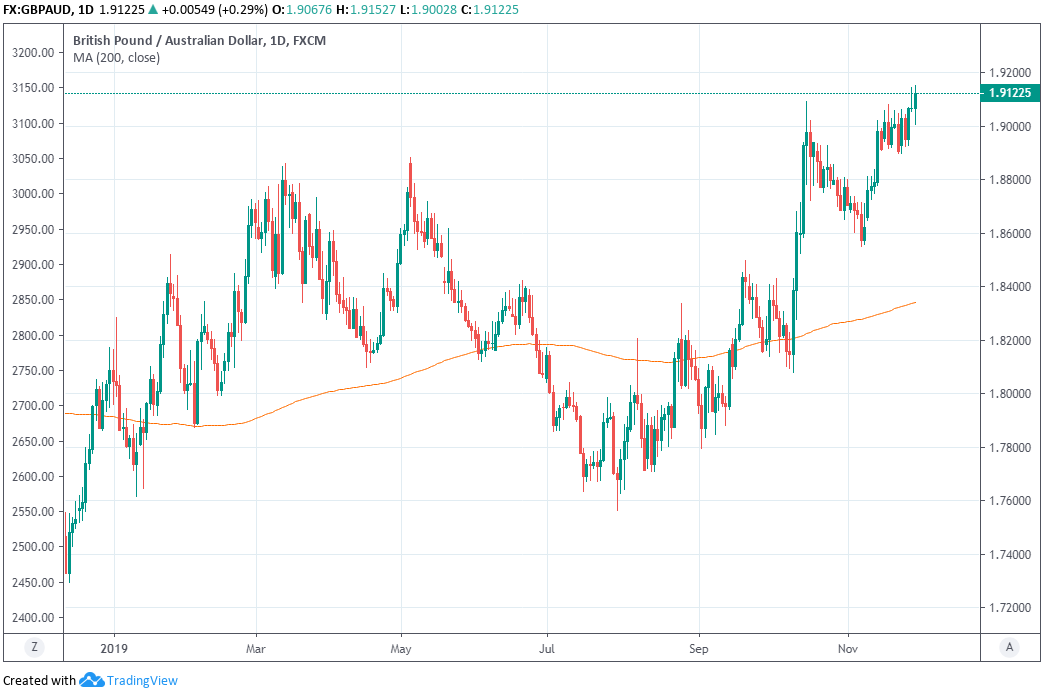 The above factors combined helped push the Pound-to-Australian-Dollar rate to a fresh post-referendum high of 1.9152 ahead of the weekend,although there could be more upside in store for the  exchange rate if Australian GDP and job advertisement numbers dissapoint the market over the coming days. Bad third-quarter growth numbers, or falling job advertisement, might prompt further Aussie worries about a possible nightmare at the Reserve Bank of Australia.

"We think the expected soft investment outcome will be a major disappointment for the RBA, doubly so given the negative outlook in the Q3 capex survey," says David Plank, head of Australian economics at ANZ. "We are sticking with our view that the RBA will cut in February and May. We don’t see QE happening in 2020 unless the economy is exceptionally weak or hit by an external shock."

ANZ forecasts a year-end close of 1.9230 for the Pound-to-Aussie rate, which is above Friday's levels, because the banks sees Sterling strengthening modestly in the month ahead while the Aussie also declines of its own accord. However, a Friday close for the Pound-to-Aussie rate above its post referendum high could see Sterling's attention revert to the 1.95 level, which coincides with the 78.6% technical retracement of the post-June 2016 sell-off.

The Pound has been retracing its Brexit losses ever since the referendum, taking out one Fibonacci level at a time, and a close above the previous highs might be enough to get technical analysts excited about the prospect of further gains ahead. However, the final resting place of the British unit at year-end will be determined in large part by the outcome of the looming general election. 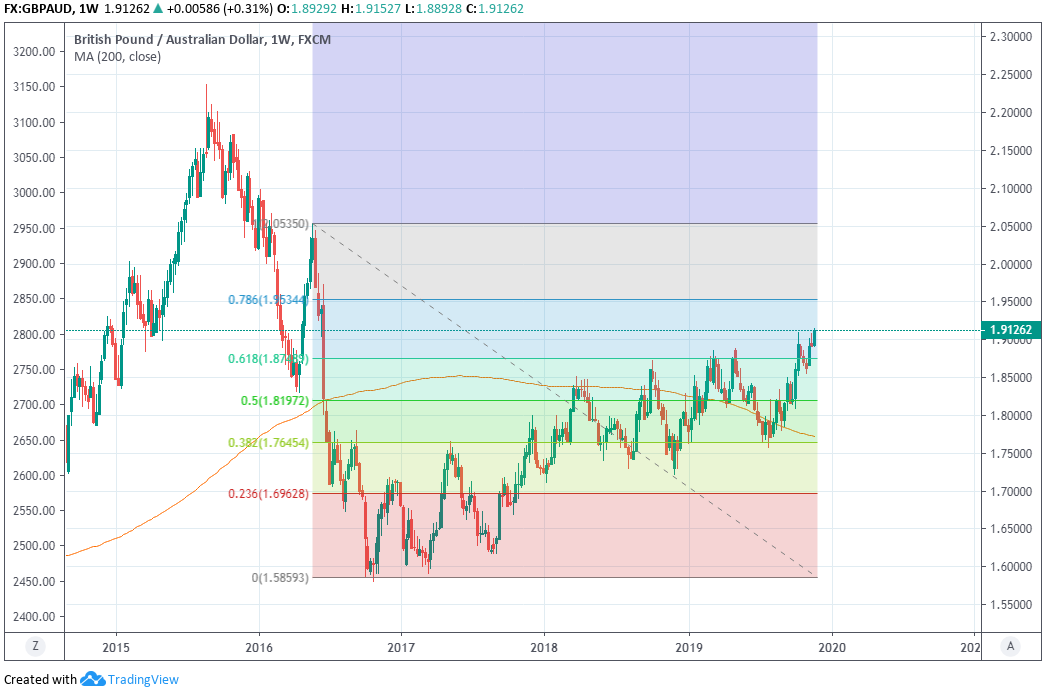 "Escaping a Corbyn government will take the chance of exchange controls being imposed down to zero. But the UK still sports an ugly BoP and there is no reason to believe that a "Boris government" with a strong majority will allow the Brexit transition phase to be extended ad infinitum. Read between the lines: Barnier's "level playing field" remark needs to be taken as a warning shot," says Stephen Gallo, European head of FX strategy at BMO Capital Markets.

Currency markets favour a Conservative government. A part of the bias comes from a desire among investors to negate the threat of a 'no deal' Brexit and also see the economy move on from the current stage of negotiations, which has paralysed the Bank of England and some businesses, while the rest is centred on fears about the opposition. But a Conservative victory wouldn't exactly be risk-free for investors or Sterling.

Prime Minister Johnson's agreement reduces the threat of a 'no deal' exit because once signed it will force the government into an undesirable choice if UK negotiators are unable to address the EU's purported concerns in relation to the Northern Irish border, to a level that Brussels is satisfied with.

The choice is between all of the UK remaining locked in a 'standstill transition period', in which it would be subject to EU rule without representation in its intitutions, and subjecting the Northern Ireland to a quasi form of shared sovereignty in spite of its objections before Great Britain departs under a 'no deal' exit. Unionists would have to run a possibly-insurmountable gauntlet to escape those arrangements and have arguably drawn the short straw, while there's reason to believe Johnson will soon be forced to choose. 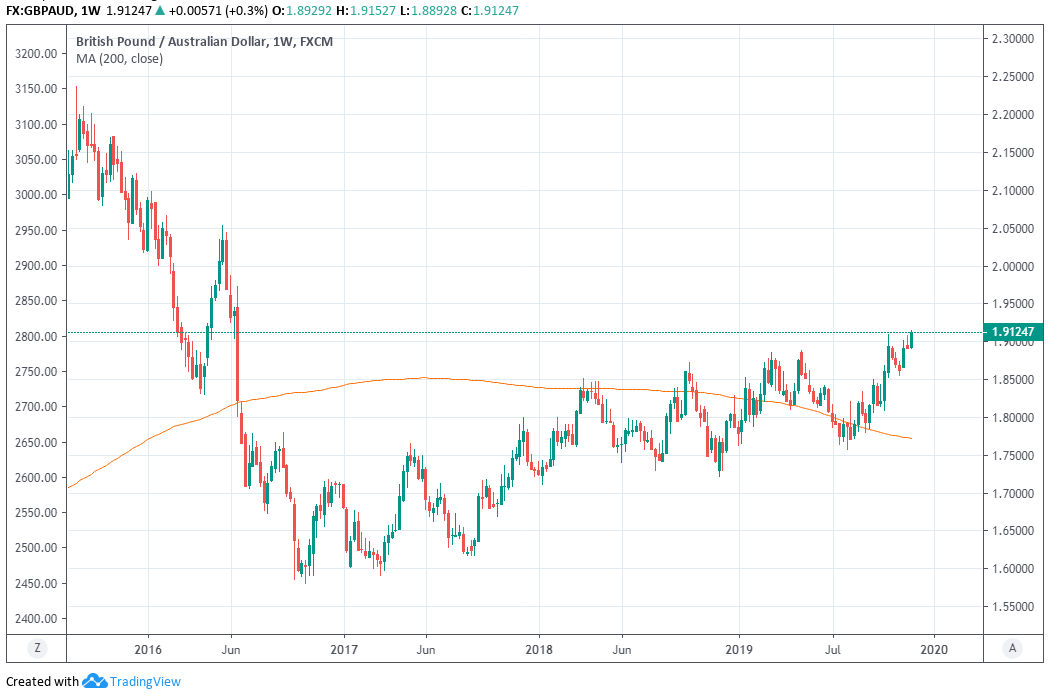 "GBP will rally further if Wednesday's MRP poll from YouGov, which had CON holding firm with an 11% margin over LAB, is confirmed on December 12/13. But we are already looking beyond the UK election to 2020. We think downside in EURGBP from here is rather limited, with risks during the Brexit transition now being considerably "underpriced" by the FX market," BMO's Gallo says.

BMO's Gallo sees scope for Johnson's election pledge to complete the next stage of negotiations before the end of 2020 as creating room for the EU to use the apparently onerous terms of the withdrawal agreement to foist upon the UK, trade terms that would be politically contentious with some parts of the electorate and government. That would threaten to see the paralysis of recent years roll on and might even have consequences that ultimately prove to be worse than those of the dreaded 'no deal' Brexit.

It's that dynamic, which is currently lost on currency traders, that might undermine the Sterling rally in the coming weeks if Boris Johnson wins the election. However, an opposition victory could have an even more severe impact on the British currency, according to some analaysts. Capital Economics for instance, forecasts the Pound would fall to 1.20 against the U.S. Dollar if opposition Labour Party leader Jeremy Corbyn makes it into 10 Downing Street, which implies a 7% loss from Friday's levels.

The Pound-to-Aussie rate wouldn't be left unscathed by that scenario unless the AUD/USD rate was to suffer a matching and simultaneous decline.