- Investors, AUD only ready for one more RBA cut.

The Australian Dollar has undeperformed this week and might remain a laggard in the year ahead as the Reserve Bank of Australia (RBA) cuts rates again and comes closer to launching a quantitative easing (QE) program.

Australia's Dollar was on its back foot against the U.S. Dollar and Pound Sterling Thursday after official data revealed a third consecutive fall in the value of capital expenditures during the third quarter.

"AUD/USD declined further towards 0.6760 in the Asia session on US‑China trade concerns and softer than expected Australian economic data," says Kim Mundy, a strategist at Commonwealth Bank of Australia. "Data to date suggest the Australian economy expanded a soft 0.5%/qtr in Q3, lifting the annual rate to 1.6% (4 December). Sub‑trend economic growth will support expectations for further monetary policy easing by the RBA and can continue to weigh on AUD." 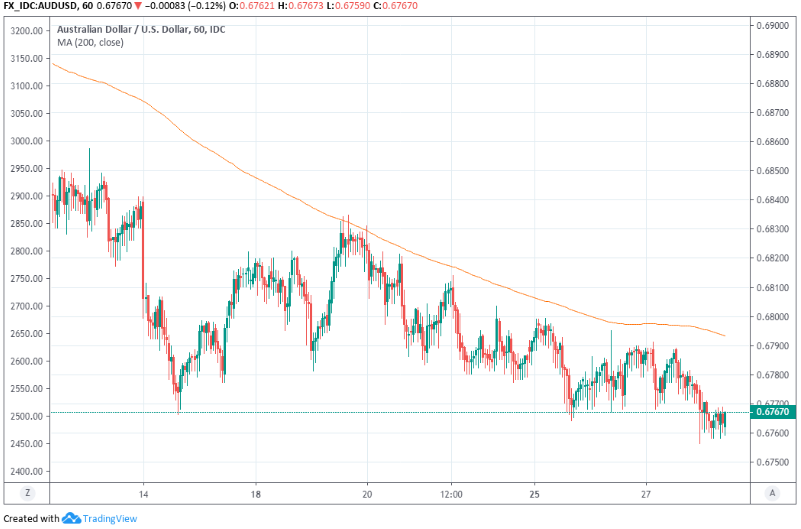 Above: AUD/USD at hourly intervals. Weighed down this week by RBA trade, strong USD and U.S.-China headlines.

Thursday's figures came amid a further deterioration in U.S.-Chinese relations and after a landmark speech from RBA Governor Philip Lowe in which he set out the bank's views on the controversial subjects of quantitative easing and negative interest rates that prompted one of Australia's largest lenders downgrade its interest forecasts Wednesday.

President Donald Trump signed the Hong Kong Human Rights and Democracy Act into law Wednesday just as markets were celebrating mutual claims of progress in talks aimed at firming up the 'phase one deal' that was said to have been agreed on October 11. The decision drew immediate condemnation from Beijing as well as threats of retaliation.

It's not yet clear if the spat over Hong Kong will prevent the world's two largest economies from reaching a deal to end the trade war although the talks have been a sideshow to the bigger Australian Dollar headwind of the week that is increasingly, RBA monetary policy. The RBA lifted the Aussie Tuesday when it said that quantitative easing is "not on our agenda at this point in time" and "negative interest rates in Australia are extraordinarily unlikely," but not everybody bought Governor Lowe's claims.

"Westpac remains more pessimistic than the RBA about the prospects for Australian growth and unemployment and now expects an additional cash rate cut, to 0.25% in June 2020 and commencement of QE in H2 2020," says Sean Callow, a strategist at Westpac. "Look for AUD/USD ranges to edge lower again, towards 0.6700, our long-standing year-end target." 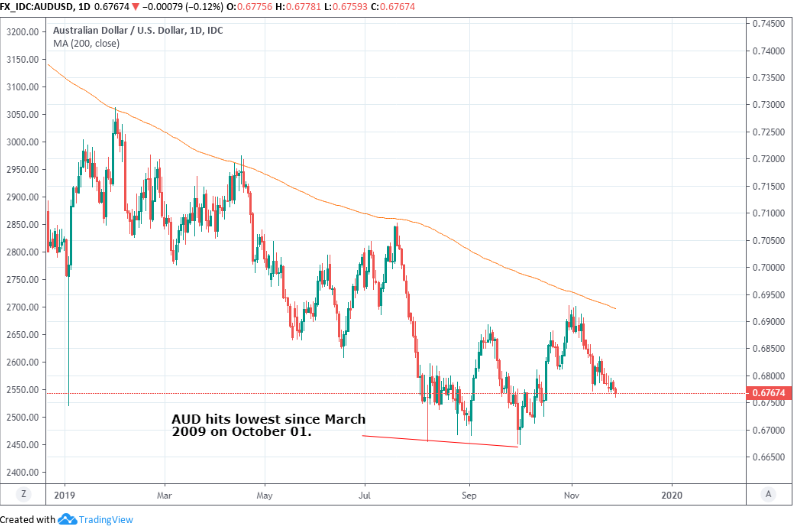 Above: AUD/USD rate at daily intervals. Weighed down in 2019 by RBA cuts, U.S. rates and U.S.-China trade war.

"AUD/USD remains bearish while trading below the 2019 downtrend line at .6895. This resistance is reinforced by the 200 day ma at .6925. The market is vulnerable to further losses this week to initial support offered by the .6724 October 16 low ahead of the .6671 October low. We suspect that this will again hold for further ranging," says Karen Jones, head of technical analysis at Commerzbank. "Failure at .6671 on a closing basis targets the .6548 February 1999 high. We note TD support on the weekly chart at .6535 also."

Markets were worrying that negative rates or quantitative easing would appear on the RBA's agenda at some stage in 2020 because inflation remains below the target, the labour market has begun to deteriorate even after the bank cut interest rates three times this year and the global economy is still mired in a slowdown. But Lowe told the Annual Australian Business Economists Dinner in Sydney on Tuesday that such extreme policy actions are unlikely because Aussie growth should pick up next year.

Quantitative easing would see the RBA create new money in order buy government bonds and force their yields lower. Government yields are baked into all of the interest rates charged across economies so when central banks force them lower they also indirectly reduce borrowing costs for companies and households. The overall idea is that lower borrowing costs lead to more spending that can help lift inflation toward a predetermined target, but they also mean lower returns to investors and a less attractive currency.

Westpac downgraded its forecasts because it had previously thought the RBA would consider a 0.5% cash rate to be the so-called 'effective lower bound' but Lowe said this week the bank thinks it can cut rates as low as 0.25%. And its new forecasts are bad news for the Australian Dollar because financial markets are not currently priced for any more than one additional rate cut over the next 12 months, although the bank is not alone with its dire projections.

"RBA Governor Philip Lowe set a high bar for launching quantitative easing (QE) in Australia. But against a backdrop of stubbornly-low inflation and rising unemployment, we suspect that it won’t be long before it is cleared," says Simona Gambarini at Capital Economics. "We have pencilled in two 25bp cuts next year, one in February and one in April. That would bring Australia’s policy rate to 0.25%, which Mr Lowe indicated as the presumed floor for interest rates and the level at which the Bank would start considering QE."

Pricing in the overnight-index-swap-market implied on Thursday, a February 04 cash rate of 0.55%, up from 0.53% on Monday. And the implied rate for November 03, 2020 was just 0.49%, suggesting investors see little prospect of the cash rate reaching the 0.25% trigger level for a currency-crushing QE program any time soon. Those numbers will rise and fall in the months ahead, likely taking the Aussie with them, and any convergence with Westpac's forecasts would weigh heavily on the currency.

Minutes of the November RBA meeting revealed last week that policymakers saw a clear case for a fourth 2019 rate cut this month but opted to wait and further observe the impact that earlier reductions in the cash rate, which has fallen from 1.5% to 0.75% this year, have had on the economy. The bank said "only gradual progress having been made" toward its objectives is reason enough to want to cut rates again but refrained from doing that.

"The yield on AUD and NZD appears less attractive after their respective central banks cut rates in 2019, but both currencies can leverage on their very attractive undervaluation," says Francesco Pesole, a strategist at ING. "The AUD screens well, although we are worried by the risk of RBA QE in 2Q20 – which would be very negative for AUD."

Pesole says the Aussie is the most undervalued of major currencies but that it would fall by another 5% if the RBA did go ahead with a QE program. However, he and the ING team forecast the RBA will not cut rates at all next year and that in part because of this, the Aussie will rise back to 0.72 against the U.S. Dollar by the end of 2020. The Pound-to-Aussie rate is seen rising only as far as 1.91 next year, a short distance above Thursday's level. 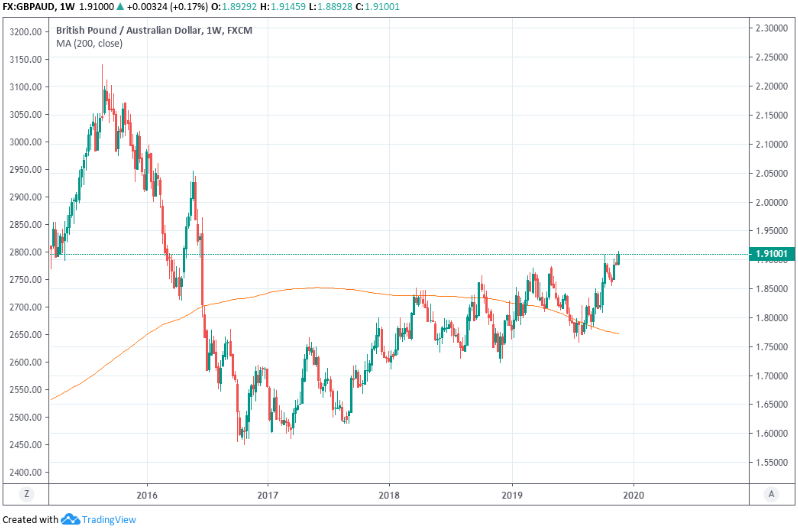