- CPI ticks up to 1.7% as AUD depreciation lifts inflation.

- As market gears up for its third Federal Reserve rate cut.

The Australian Dollar advanced against all rivals Wednesday after official data confirmed a third-quarter pickup in inflation that was enough to see markets further rule out the already-low prospect of another rate interest cut from the Reserve Bank of Australia (RBA) in November.

Inflation was 1.7% annualised in the third quarter, up from 1.6% previously and in line with market expectations, although the consumer price index remains beneath the lower boundary of the 2%-to-3% target range. Trimmed mean inflation, which is seen as a better reflection of underlying trends in prices because it excludes volatile items, was 1.6% for the quarter.

The Australian Bureau of Statistics (ABS) says the biggest price rises were in the cost of overseas holidays, travel and accommodation although tobacco, child care and property rates as well as charges all saw increases during the recent quarter. However, the rub for the RBA and economic outlook is that price changes in all those categories have either been influenced by fluctuations of the Aussie Dollar or by government policy changes.

"There are signs that we are getting some AUD deprecation pass-through to inflation in clothing & footwear (for some selected groups) and in automotive vehicles. But it is harder to find any broader impact or wider inflationary pulse," says Justin Smirk, an economist at Westpac. "With such a modest outlook for housing costs we can find little to suggest any risk of a meaningful acceleration in core inflation that will sustainably lift it back into the RBA’s target."

Smirk says Wednesday's numbers are just enough to mean the Reserve Bank of Australia is able to eschew a fourth 2019 interest rate cut in November but warns that they aren't enough to prevent another reduction of borrowing costs in the near future. Westpac, one of Australia's four largest lenders, is forecasting the next rate cut will come in February 2020. 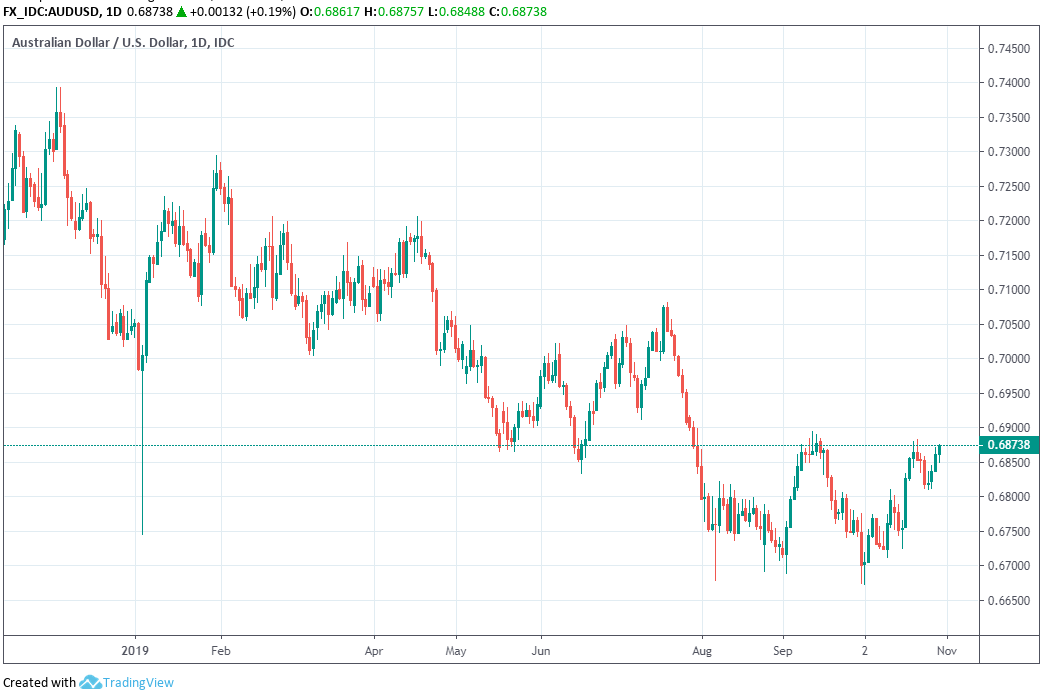 Pricing in the overnight-index-swap market implied on Wednesday, a November 05 cash rate of 0.73%, which is below the current 0.75% level but only by a fraction. That implied rate is up from 0.69% on Monday, which explains some of the increase in Australian Dollar exchange rates over recent days. Meanwhile, the implied rate for December 03 has risen from 0.61% to 0.66%.

"The number gives it some flexibility around the timing of the next rate cut; and a move next week is materially less than a 50% probability in our view. However, we still think the RBA will eventually need to ease further if it is to drive spare capacity out of the labour market and get the unemployment rate down towards 4.5%," says David Plank, head of Australian economics at Australia & New Zealand Banking Group (ANZ).

The RBA has cut rates three times this year in an effort to lift growth and inflation, although Westpac, ANZ and the wider market all expect it to cut the cash rate again, to a new record low of 0.5%, before long. The bank is attempting to coax the economy to 'full employment' in the hope of seeing rising wage packets that will eventually lead to higher inflation, which means the monthly jobs numbers will be important in the quarters ahead.

This has weighed on the Aussie and more than offset in terms of relative government bond yields, the two cuts announced so far by the Federal Reserve. However, the Aussie is also heavily influenced by developments on the global scene including those around the Federal Reserve and in the U.S.-China trade war, both of which were in focus for the market again on Wednesday. 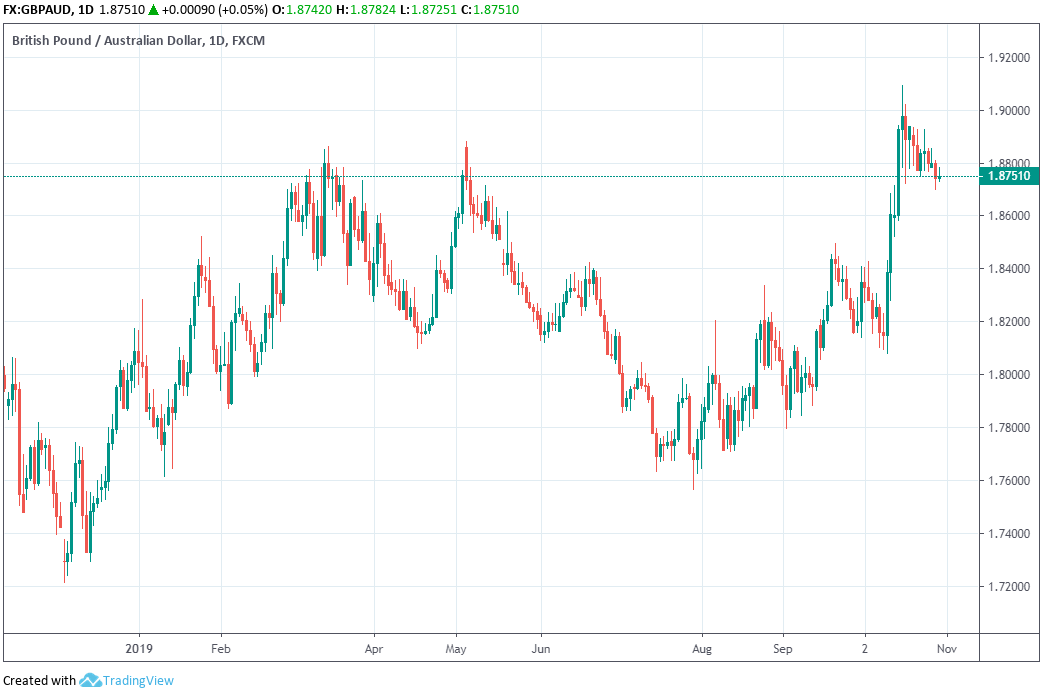 "AUD/USD could lift slightly further ahead of the October FOMC meeting because the market is still short AUD. However, any near‑term appreciation in AUD would likely only be modest. Upside in AUD is limited," says Kim Mundy, a strategist at Commonwealth Bank of Australia. "We too expect the FOMC to cut the Funds rate by 25bp to a range of 1.50%‑1.75%.  USD can lift because the risk is the FOMC signals a pause to its mid‑cycle interest rate adjustment.  Nonetheless, USD strength will be contained because upward revisions to US interest rate future rates futures will be limited in our view."

The Federal Reserve is widely expected to announce its third 2019 interest rate cut on Wednesday at 18:00 London time, which will take the Fed Funds rate down to 1.75%, although there's a risk the bank signals again to markets that it might wait for an extended period before cutting again. Markets are betting heavily that it'll cut rates twice more within the next nine months, with a weighty probability of a December 2019 rate cut also baked into the overnight-index-swap market.

Australia's Dollar has been squeezed by narrowing bilateral interest rate differentials in a number of directions over the last year or more although nowhere else have such pressures done the damage that they have to the AUD/USD rate. If the Fed neglects Wednesday to validate those market wagers on another two cuts then the U.S. Dollar could receive a bid from the market that puts the AUD/USD rate under pressure.

Meanwhile, investors will also watch for fresh trade war 'tape bombs', which could be either positive or negative for the Aussie. The antipodean unit has benefited from the 'phase one' deal President Donald Trump claimed to have struck with Chinese Vice Premier Liu He on October 11, although signing of the agreement was never likely to take place before the APEC summit on November 16.

A White House official was reported Wednesday to have said the agreement may not be concluded by then, although others are said to have claimed a deal will still be reached. The October 11 pact averted one tariff increase that was planned for just four days afterwards but does little to address another set of levies due to be implemented on December 15. Both have reached agreeements on ceasefires in the trade war on repeated occasions but they've always broken down within months. 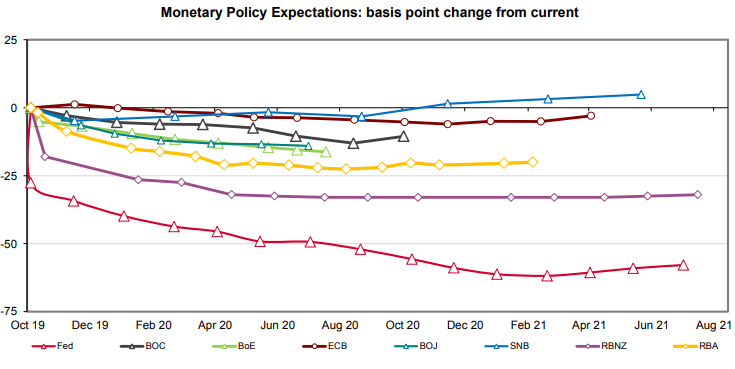