- AUD aided by a retreating USD and comments from RBA Governor.

- Says AU inflation pressures and growth could pick up in year ahead.

- Commerzbank says charts are pointing to more gains for AUD/USD.

The Australian Dollar climbed for a fourth consecutive session Monday as an upbeat mood in global markets continued to lift risk assets but analysts are divided over the outlook, with some telling clients the antipodean unit's rally could soon fizzle out while others tip continued gains in the days ahead.

Risk currencies were on the rise Monday and safe-havens in retreat after a 'no deal' Brexit was made less likely by the passing of a 'rebel' amendment in the UK parliament. Brexit developments have aided both the Pound and Euro over recent days, leading to a decline in the Dollar index and a pick up in risk appetites, which has benefited the commodity-backed Australian Dollar.

However, the U.S. Dollar is also under pressure from increasingly weighty bets suggesting the Federal Reserve (Fed) will cut its interest rate again at the end of this month, and on a number of occasions next year. Those wagers are depressing bond yields and reducing the additional return that investors earn from holding U.S. bonds instead of Australian debt.

"AUD lifted to a one‑month high last week after the Australian unemployment rate dropped slightly to 5.2% in September, and after the USD eased following a reduction in some of the Brexit uncertainty. However, uncertainty around the likelihood of a US‑China trade deal, slowing Chinese economic growth, and some downward pressure on Australia’s commodity export prices, will limit AUD upside," says Richard Grace at Commonwealth Bank of Australia. 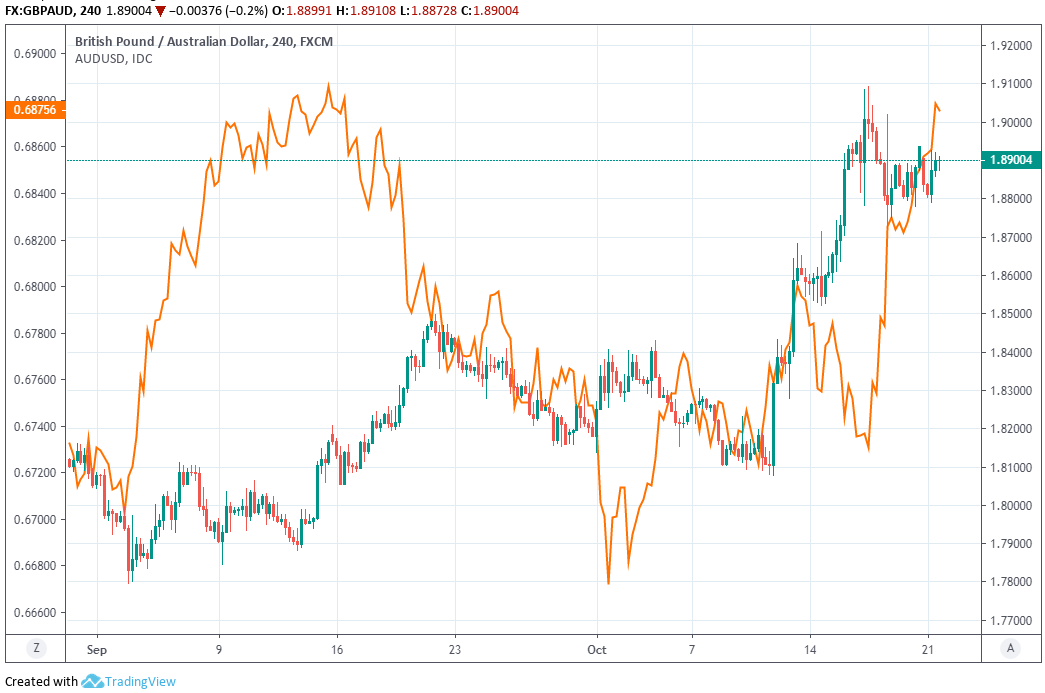 Grace tips the U.S. Dollar for more losses over the coming days as the perceived threat of a 'no deal' Brexit continues to ebb, although he also says the extent of the decline will be limited by concerns about the durability of a trade war ceasefire verbally agreed by the U.S. and China earlier in October.

Members of the UK parliament agreed Saturday that Prime Minister Boris Johnson should request from the EU a third delay to Brexit, and one that lasts as long as is necessary to secure a withdrawal agreement that prevents a 'no deal' Brexit. This was after Johnson emerged from the European Council chamber in Brussels last week proclaiming a deal that had put him on course to test the parliamentary waters with it at the weekend.

"AUD and NZD are still benefiting from the general risk-on moves in markets on the back of better news related to US-China trade talks and the Brexit negotiations. The RBA's annual report last week and the latest Australian unemployment data have also contributed. AUD might start to look a bit expensive, with some of the gains likely to fizzle out during the week," says Daniel Jakobsson, a strategist at UBS. 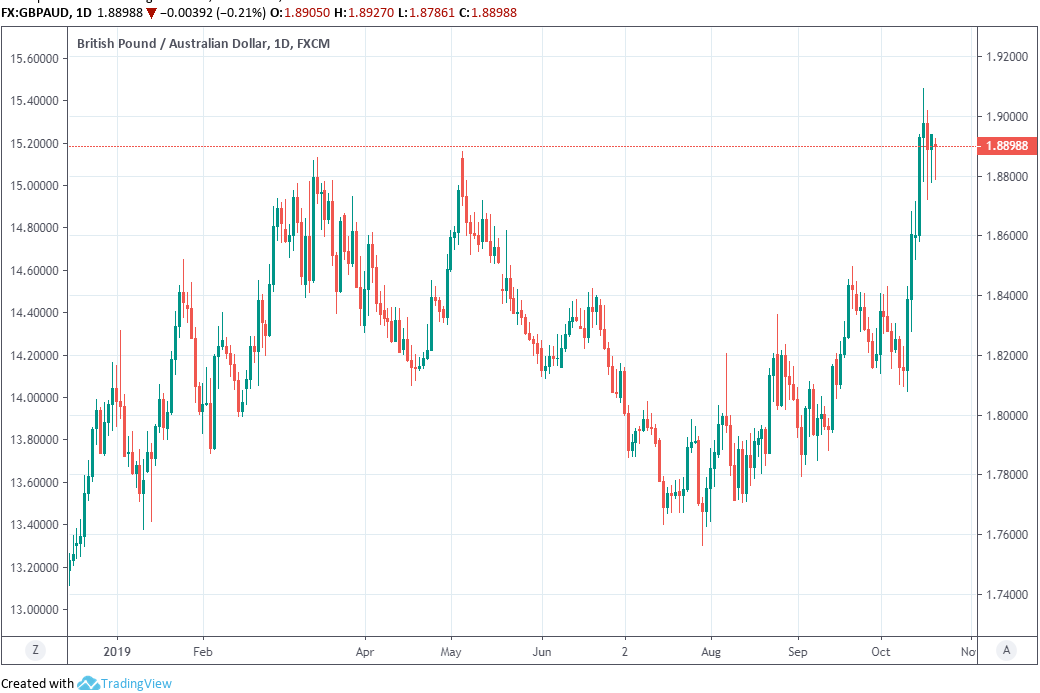 UBS says the Australian Dollar has the strongest sensitivity to Brexit-related newsflow after Sterling, which could mean the Aussie rises and falls over the coming weeks in tandem with the Pound and shenanigans in the UK parliament. However, Brexit is not the sole driver of the Australian currency.

Australia's Dollar has risen against its U.S. rival for four days now and was aided last week by a strong jobs report as well as comments from Reserve Bank of Australia (RBA) Governor Philip Lowe.

Lowe told an International Monetary Fund (IMF) conference that Australian growth and inflation pressures could pick up over the next year. The RBA has cut rates three times in 2019 in an effort to stoke faster growth and to get the consumer price index back to the midpoint of the 2%-to-3% target range.

Underperformance in the global as well as domestics economies had seen investors bet heavily the bank would cut rates on as many as two more occasions in the months ahead but Lowe's comments and last week's jobs data have encouraged some in the market to think again about the outlook. 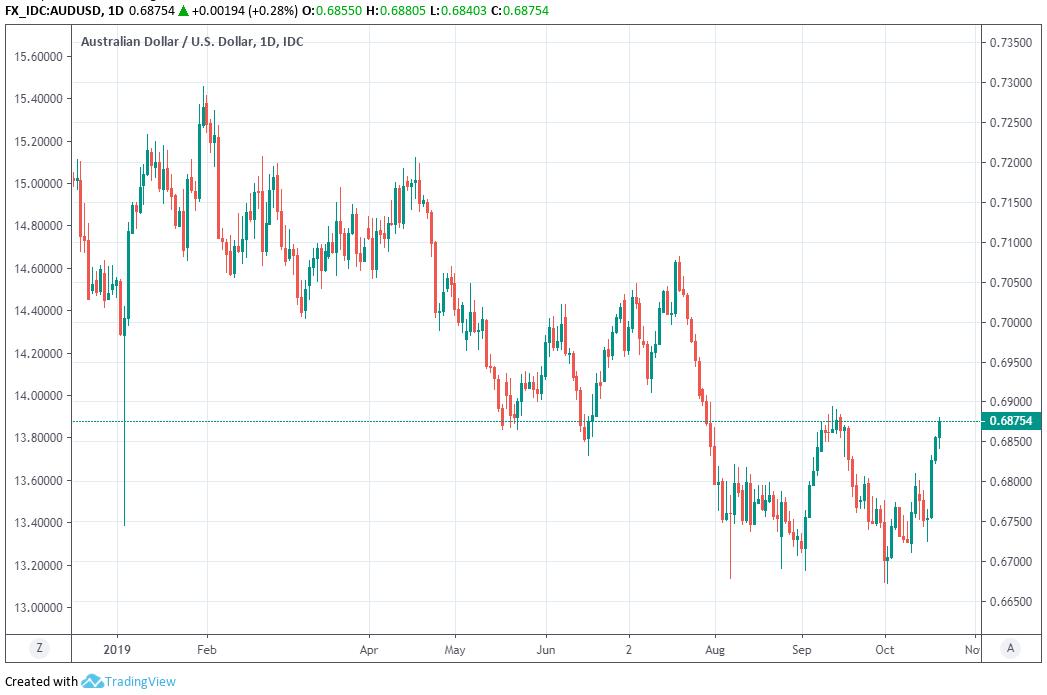 "While we still see a Nov cut arguably justified given likely ~record low underlying CPI, Lowe's comments suggest little rush to ease, so we revert to our view prior to Aug retail sales, & push out the next cut to Dec (with Q3 GDP publicly available the next day), with a risk of Feb if there’s progress on global risks, or domestic data surprises to the upside (especially unemployment)," says George Tharenou, an economist at UBS.

Pricing in the overnight-index-swap market implied on Monday, a November 05 cash rate of 0.70%, which is below the current 0.75% but up from the 0.64% that prevailed early last week. It's also an increasingly long way off where it would be if the RBA cut the benchmark by a further 25 basis points. The rate implied for December 03 was 0.61%, up from 55% last week and still above the threshold that would prevail following an additional cut.

Those increases in the implied cash rate, as well as a concurrent decrease in the rates implied for the Federal Reserve over the coming months, have helped lift the AUD/USD rate over the last week but those trends could easily be reversed by bad economic data, an adverse turn in the Brexit newsflow or another flare up in the U.S.-China trade war. Technical developments on the charts will also have an impact on the Aussie too.