- But U.S.-China truce matters for RBA, is upside risk to AUD.

- Trade truce amid ongoing Brexit saga to weigh on GBP/AUD.

The Pound-to-Australian-Dollar rate could rise four percent into year-end if the UK's exit from the EU is delayed a third time this year, according to the latest forecasts from National Australia Bank (NAB), although a possible truce in the U.S.-China trade war is a potential downside risk for the British exchange rate.

Pound Sterling was the best performing major currency Thursday after Prime Minister Boris Johnson said both he and his Irish counterpart had made progress toward securing an EU withdrawal deal ahead of two key deadlines on October 19 and October 31. The development supports NAB's long-held view that either a further delay to Brexit, or a deal facilitating a departure from the bloc, is more likely than a 'no deal' on October 31.

NAB says Boris Johnson is likely bluffing when he claims that he'll take the UK out of the EU with or without a deal on October 31, and cites the so-called Benn Act for anticipating that Johnson will ultimately be request a potentially-long delay to the UK's exit if he's unable to secure an agreement before October 19, the deadline for such an accord to have been approved by the UK parliament.

"There have been suggestions the government could use the primacy of EU law (Art. 50) over UK law (Benn Act) to ignore the extension. Numerous alternative ruses have been touted...we assume these are pre-election tactics; designed to show voters come a late November poll that it was not Johnson’s fault the UK did not leave the EU," says Ray Attrill, head of FX strategy at NAB. "Our base case is still heavily skewed towards an extension, but a deal is not impossible." 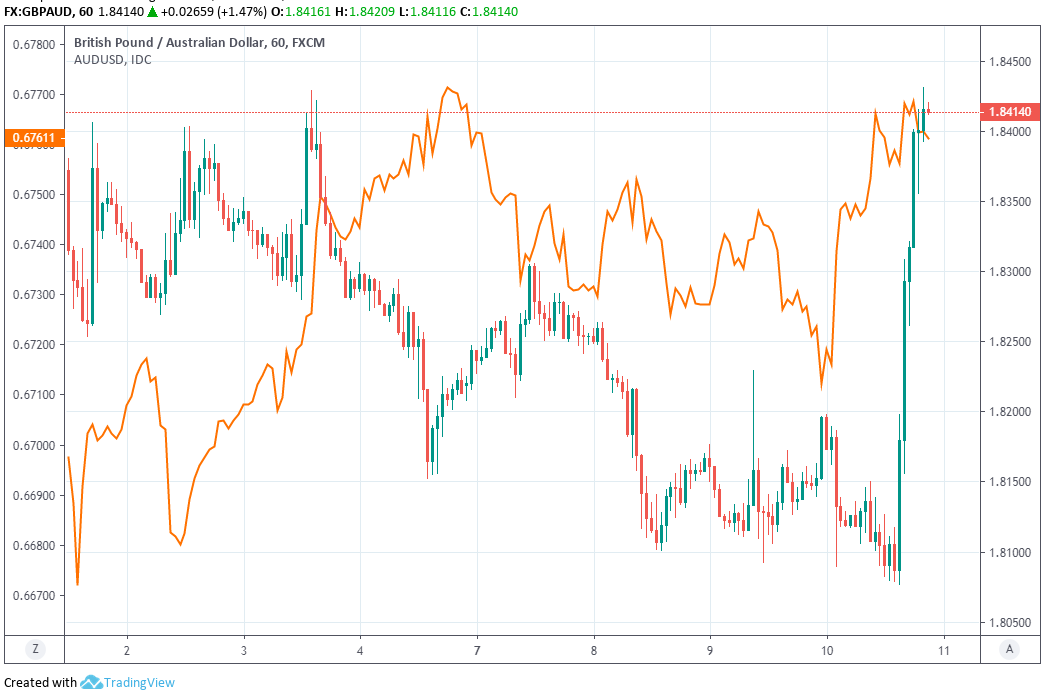 Failure to secure a deal or another delay would result in a 'no deal' Brexit that many analysts project will push the GBP/USD rate down to at least 1.15, but potentially much lower. In an environment where the AUD/USD rate is recovering from earlier losses, that would mean the Pound-to-Aussie rate also experiences substantial declines.

Attrill says the Pound will driven by the ebb and flow of headlines relating to Brexit over the coming weeks, with the GBP/USD rate likely treading a wide 1.22-1.28 range. If the AUD/USD pair was to remain constant around its Thursday level of 0.6750, that would imply a Pound-to-Aussie range of 1.80-to-1.89, although the latter rate was quoted at 1.8426 Thursday after rising 1.39% during the session.

"We’re taking this opportunity to revise up our GBP forecasts to better reflect our long-standing view the UK will not leave the EU without a deal – at least not yet," Attrill says. "While the risks have eased they have not disappeared. An election could deliver a Johnson victory that could still then lead to a No Deal exit as could a hung parliament that resulted in a second referendum." 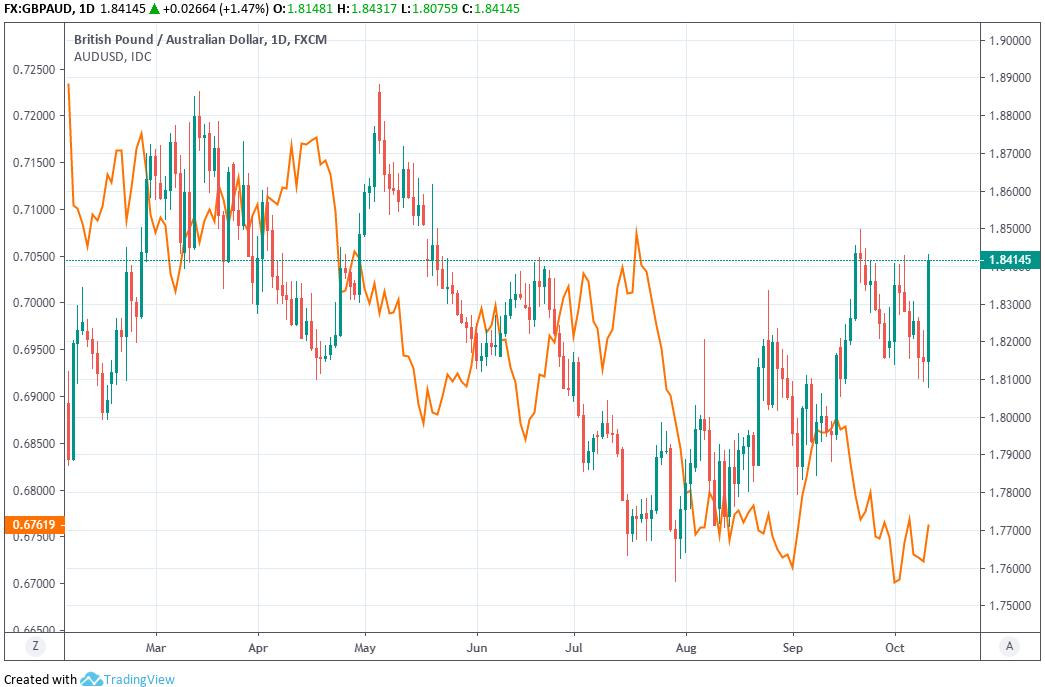 NAB forecasts the Pound-to-Aussie rate will rise from just over 1.84 Thursday to 1.92 by year-end, largely on relief over the delay to Brexit although there's also some Aussie weakness in the projection too. The bank forecasts the AUD/USD rate will slip to 0.65 this year because it doubts a resolution to the U.S.-China trade war can be found any time soon.

However, Thursday's developments in the ongoing negotiations suggested strongly that at least temporary truce to the tariff fight could well result from this week's talks, prompting a strong rally in so-called risk assets including Australian Dollar exchange rates. The Aussie rose more than 1% against most so-called safe-haven currencies, although it gained only 0.59% against the U.S. Dollar. Those are all still substantial gains for any currency in one given session.

"Our current AUD/USD forecasts have the pair down to 0.65 by year end, assuming no early Sino-US trade breakthrough and a firmer USD/CNY. Our track then shows a recovery to 0.70 next year, assuming a trade deal of sorts in H1 2020, a reversal of the USD/CNY uptrend and a weakening USD. The assumed recovery is at risk from the RBA embarking on unconventional policy measures. Our current forecasts are deemed consistent with the RBA’s Cash Rate falling to 0.5% but no more," Attrill says. 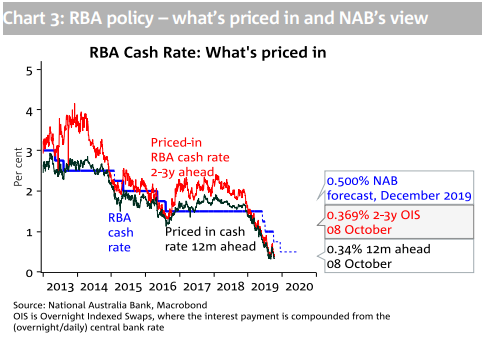 Australia's Dollar has been hurt by the trade war because it, and the impact it's had on parts of the global economy, have darkened the outlook for growth in the commodity and China-exposed Australian economy. That's not only contributed to the Reserve Bank of Australia (RBA) decisions to cut the cash rate three times this year, but has also led markets to bet heavily that the RBA will have to cut interest rates again in 2020.

With the RBA's cash rate now sat at just 0.75%, it doesn't have much scope for further additional easing of its policy settings. And if faced with only a temporary truce to the trade war, which perhaps lasts the duration of the 2020 U.S. election year, the RBA might then feel inclined to save its monetary ammunition for a later date when it could be more useful. Such a thought process would inevitably lead markets to price-out the extra rate cut that's still anticipated at the RBA.

"With Brexit uncertainty front and centre, the BoE is on hold. At its August meeting, the Bank lowered its growth forecasts. More recently BoE officials have added that the Bank is likely to ease if there is a No Deal Brexit and in such a case the exchange rate should be allowed to ‘do its job’. At its September meeting the Bank added a cautionary line that political events could lead to a period of entrenched uncertainty and excess supply," Attrill says.

Above: Westpac graph of market expectations of G10 cash rates. BoE in green, RBA in yellow.

The rub for the Pound-to-Aussie rate is that if a detente in the trade war sees investors reverse earlier bets on another RBA cut coming next year, it could quite possibly happen alongside an opposing process in the UK, which would be bad for the exchange rate. The Bank of England (BoE) has led markets to believe it won't change rates until it knows what's happening with Brexit, so investors haven't bet on UK cuts to the extent they have with Australia.

Attrill notes how the BoE has recently expressed concern that persistent uncertainty over the Brexit outcome, which has so-far been prolonged by two delays, is beginning to weigh on the economy. But the NAB team is not alone in its observation because Capital Economics, a London-based consultancy, has changed its BoE forecasts this week and now tips a UK interest rate cut within months if Brexit is delayed at the end of October.

If a Brexit extension leads to further weakness in UK growth and forces the Bank of England into at least signalling that it might cut Bank Rate up ahead then investors would begin to price such a move into UK derivative markets as well as Pound Sterling, which would be bad for the British currency on any given days. And if that happens at the same time as markets are pricing-out the extra anticipated RBA cut, the Pound-to-Aussie rate could find itself in trouble.