- With bad news in price, the decline in U.S. bond yields offers support.

- GBP can shift into a higher range if Brexit proposals lead toward deal.

The Australian Dollar bested most major rivals Friday including Sterling and even after August retail sales suprised on the downside, as the antipodean unit continues to stabilise after falling to a fresh ten-year low earlier this week.

Pound Sterling was in retreat Friday for Brexit-related reasons, making it one of only a few currencies to cede ground to a wounded U.S. Dollar. The Aussie, however, was up against everything other than its Kiwi counterpart.

The antipodean currencies are benefitting from building optimism about next week's U.S.-China trade talks, but they've also been cheered by recent poor U.S. economic data that is reducing American bond yields and making so-called risk assets appear more attractive to investors. And September's non-farm payrolls report, due aty 13:30 Friday, could reinforce that trend if the consensus for 145k new jobs proves to have been too optimistic. 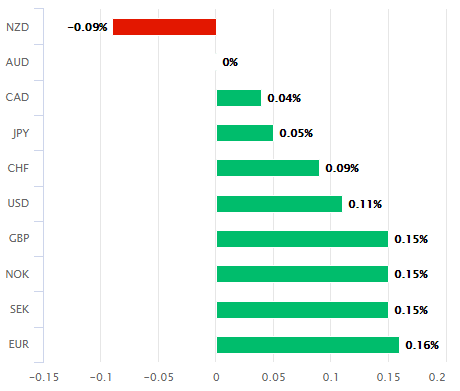 "Our economists describe non-food sales (+0.5% mm) as decent and suggest they may be a very early indications that the June/July rate cuts are starting to get some traction. But they continue to expect a final cut in this cycle before year-end," says Adam Cole, chief FX strategist at RBC Capital Markets.

Retail sales rose 0.4% in August, the Australian Bureau of Statistics said Friday, which was below the 0.5% that markets had been looking for. However, the disappointment for investors was tempered by an upward revision to the prior month's number, which rose from -0.15 to 0%. In other words, retail sales growth when the last two months are taken together, was in line with expectations.

Australia's Dollar was previously boosted by an influential but dire Institute of Supply Management (ISM) survey of the services sector that put the U.S. Dollar on its back in the noon hours Thursday, helping lift the Aussie further from a ten-year low struck earlier in the week when the Reserve Bank of Australia (RBA) took investors by surprise with a third 2019 rate cut and 'dovish' guidance.

Westpac says the Aussie should now hold above the 0.67 level heading into the October 10 and 11 trade talks between the U.S. and China.

"Considering the past week has included a key US manufacturing survey slumping to a 10 year low, the S&P 500 sliding to 5 week lows and of course the RBA rate cut, the half cent fall in AUD/USD over the week is quite a resilient performance. With some downside insulation from market positioning, the Aussie may be able to hold up into the vital US-China trade talks late next week," says Sean Callow, a strategist at Westpac. "AUD/USD should gyrate either side of 0.6700, neutral on the week." 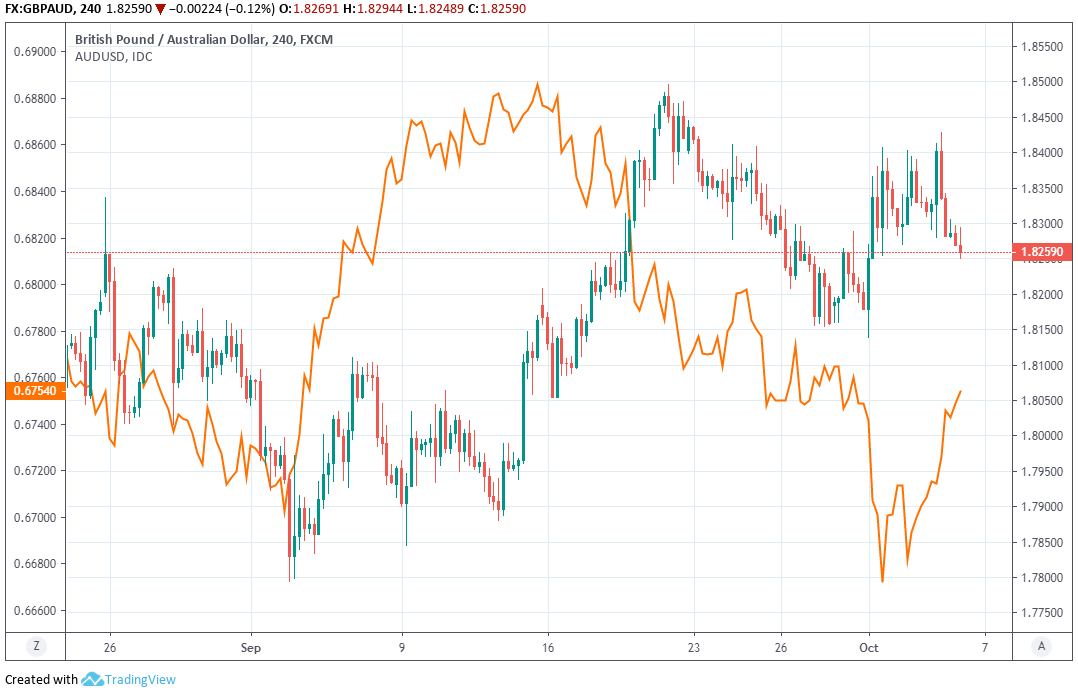 Above: Pound-to-Australian-Dollar rate at 4-hour intervals, alongside AUD/USD (orange, left).

Investors are close to having priced another RBA rate cut into the derivative market and Aussie exchange rates, which should provide the currency some respite from selling pressures that pushed it from 0.80 at the beginning of 2018 to 0.67 on Thursday. Meanwhile, U.S. bond yields are falling amid increasing wagers suggesting the Fed will cut rates again sooner than previously thought.

"The fall in US yield support also limits the downside on the pair, with January 2020 Fed funds implied yields -11bp on the week to 1.49%, a 4 week yield low. How sustainable this fall in yields is may depend in large part on Friday’s US employment report, which will show whether the manufacturing weakness is spreading to the broader economy. We lean towards the US economy as a whole remaining resilient for now, keeping Dollar Index tilting a little higher," Callow writes, in a note to clients Thursday.

Markets are looking for at least three more cuts from the Fed in the next year with the next potentially coming as soon as this month, although they're already beginning to flirt with the idea of betting on a fourth. The bank already slashed the Fed Funds rate in July and September as part of a seemingly unsuccessful attempt to insure the U.S. economy against an ongoing global economic slowdown.

The ISM manufacturing PMI surprised on the downside Tuesday when it fell to decade low for the month of September, with most components of the survey helping to paint a picture of a U.S. economy that is now being bitten by President Donald Trump's trade war with China. And the ISM services PMI followed suit Thursday. Taken together, both suggest the U.S. economy might be headed for the rocks, which could soon mean much lower U.S. interest rates and less pressure on the AUD/USD rate. 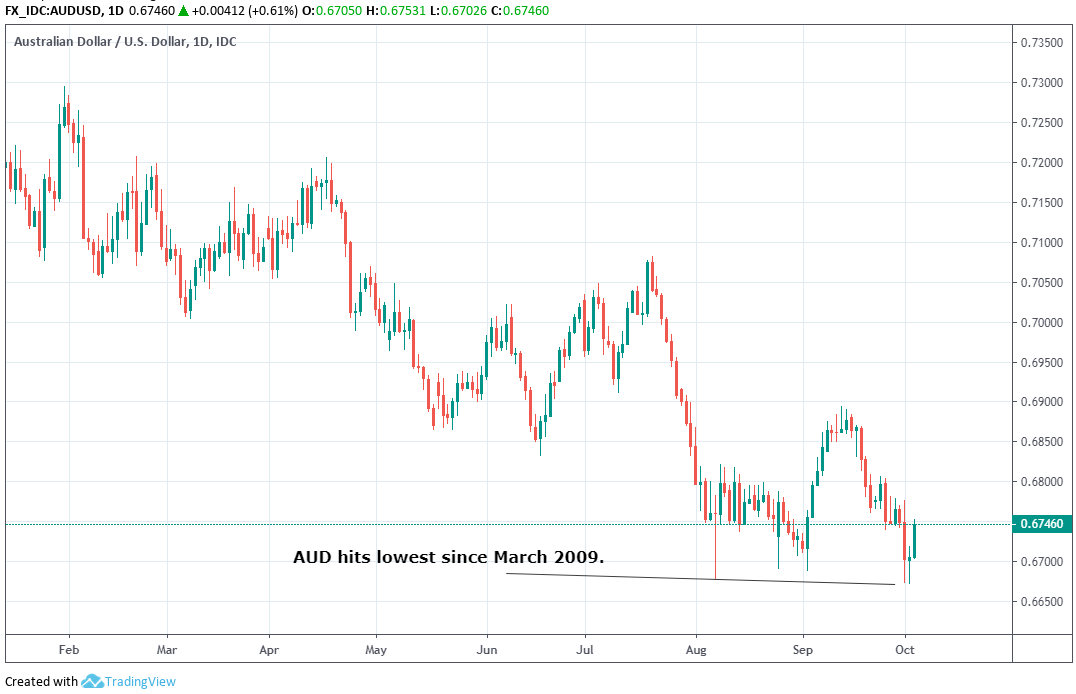 "Boris Johnson’s minority government has pushed for a last ditch attempt to reignite the potential of a Brexit deal prior to the EU Summit (17th-18th) and the deadline for the Benn Act (19th)," Callow says. "Positioning in GBP may have been reduced since the Benn Act was passed, but leveraged accounts remain notably short as the deadlines approach. Short term volatility will persist, but any clear progress towards a deal could flip GBP/USD’s 1.20-1.27 range higher."

Prime Minister Boris Johnson made a "final offer" Wednesday that was aimed at satisfying Brussels' demands over the Northern Irish border and EU single market, in the hope of agreeing a revised version of Theresa May's withdrawal agreement in time for an October 19 deadline that will see a new law previously passed by the opposition require him to request a third delay to the UK's exit if the withdrawal agreement has not been struck by then.

Pound Sterling advanced against all rivals during the Thursday session after the EU criticised Johnson's plan but did not reject it, suggesting it might still be possible to avoid the 'no deal' Brexit that Johnson claims he'll pursue if a deal is not done before the current Article 50 negotiating period expires on October 31. But appetite for Sterling seemed to be fading Friday and optimism about the negotiations also appeared to be waining.

"It's interesting to see the reversal of AUDUSD sell-off post-this week’s RBA cut," says John Hardy, chief FX strategist at Saxo Bank. "A close north of 0.6750 creates a bullish weekly candlestick reversal. Still, the pair requires heavy lifting to reverse the well established bear trend, and global growth concerns are not an environment in which the AUD can be expected to thrive." 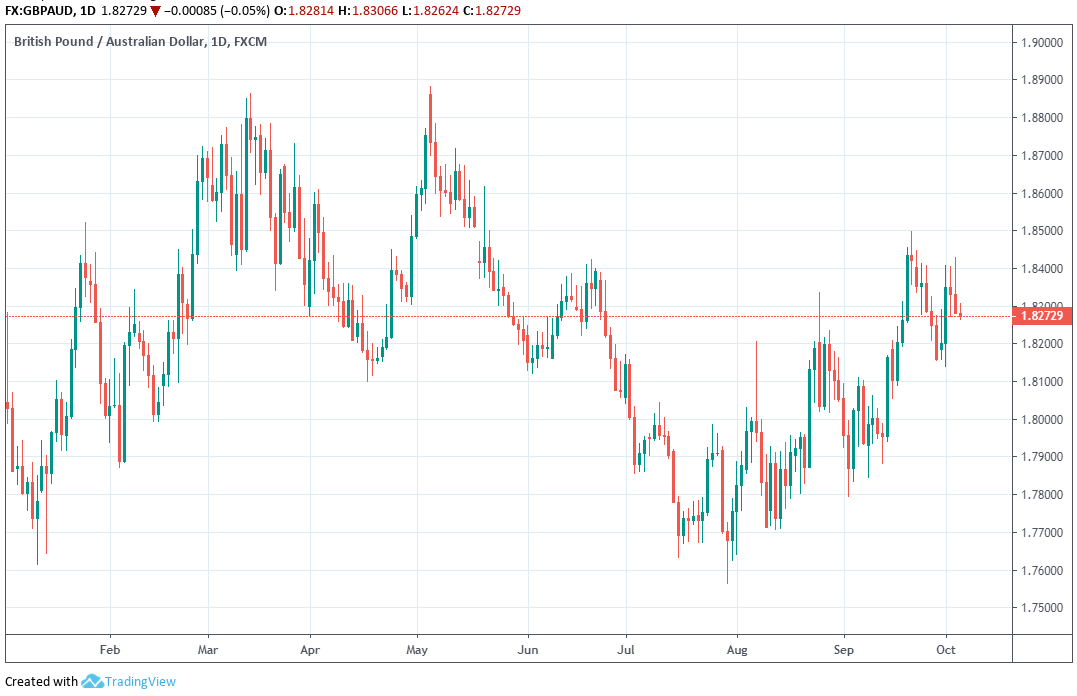