- AUD tops G10 after strong July jobs data hands one to the RBA.

- Strong jobs growth to keep the RBA at bay in Sept says Westpac.

- But most still see RBA cutting again this year, weighing on the AUD.

The Australian Dollar ruled the G10 roost Thursday as investors responded to a strong set of jobs numbers for July, which have been perceived by some as making a September interest rate cut from the Reserve Bank of Australia (RBA) less likely.

Australia's economy created 41.1k new jobs in July, according to Australian Bureau of Statistics data released Thursday, when the market consensus had been for an increase of only 14.2k. However, a 0.1% increase in the so-called participation rate, to a record high of 66.1%, meant the unemployment rate remained steady at 5.2%.

Most of the new jobs created last month were in the more valuable full-time category, with only 6.7k of the new positions being in the less valuable part-time category. However, the so-called underemployment rate rose 0.2% to 8.4% in seasonally adjusted terms while the underutilisation rate increased by a similar measure to 13.6%.

"A robust update but participation hit a new record high at the same time. So while the employment growth continues to outperform expectations the unemployment rate is very sticky around 5.2%.  As such, it is hard to see unemployment getting below 5% any time soon, let alone getting down the RBA’s natural rate of 4.5%," says Justin Smirk, an economist at Westpac. "Westpac is forecasting the unemployment rate to rise from here." 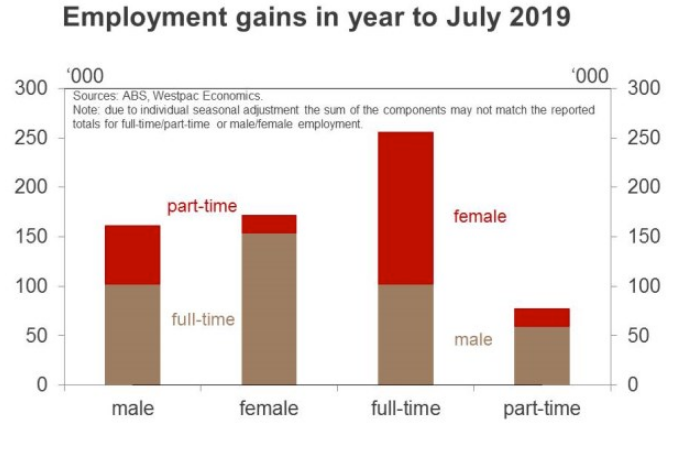 Markets care about the jobs data because jobs growth and falling unemployment lead to higher wages and increased demand in an economy, which is what the Reserve Bank of Australia (RBA) needs in order to get the consumer price index back into its 2%-to-3% inflation target band.

The RBA has explicitly tied the next steps in interest rates to developments in the labour market ever since May, and says it needs an unemployment rate of 4.5% in order to lift inflation. Only since then, the jobless rate has risen from 4.9% and the RBA has cut its cash rate twice, taking it down to 1% in July.

Although July's numbers didn't produce a downward correction in the jobless rate, they were welcomed by financial markets and helped send the Aussie Dollar to the top of the G10 league table Thursday. Westpac says the figures should keep the RBA at bay for a while, leading it to leave the cash rate unchanged in September, but not everybody agrees.

"While the RBA’s back-to-back rate cuts, tax refunds for low and middle income earners and strong infrastructure investment should help limit the rise in unemployment to around 5.5%, they are unlikely to be enough get unemployment down to the 4.5% or less needed to see stronger wages growth and higher inflation," says Shane Oliver, chief economist at AMP Capital. "We remain of the view that the RBA will have to cut rates further." 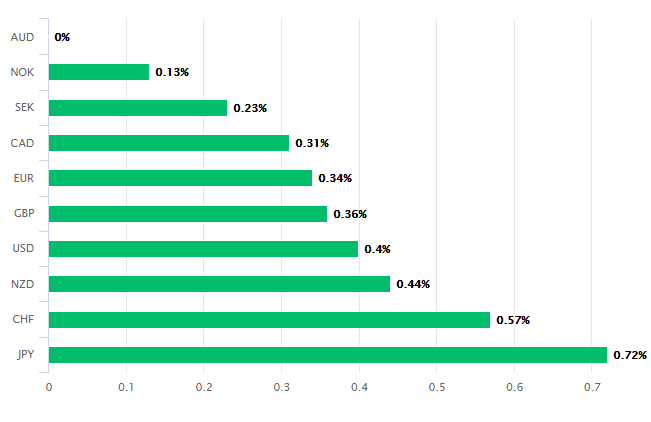 AMP forecasts the RBA will cut its cash rate again in September followed by another reduction in November, which would leave the benchmark of Australian borrowing costs at 0.50%. This is while Westpac forecasts another rate cut coming in October, followed by a final move down to 0.5% in February 2020.

"CBA Economics now expect the RBA to cut the cash rate two more times to a record low 0.50% and favour the November 2019 and February 2020 meetings," says Kim Mundy, a strategist at Commonwealth Bank of Australia. "AUD risks making new lows this week.  Global economic forces generating a slowing in the world economy will have a much greater impact depreciating AUD/USD than a rosier than expected monthly Australian July employment report." 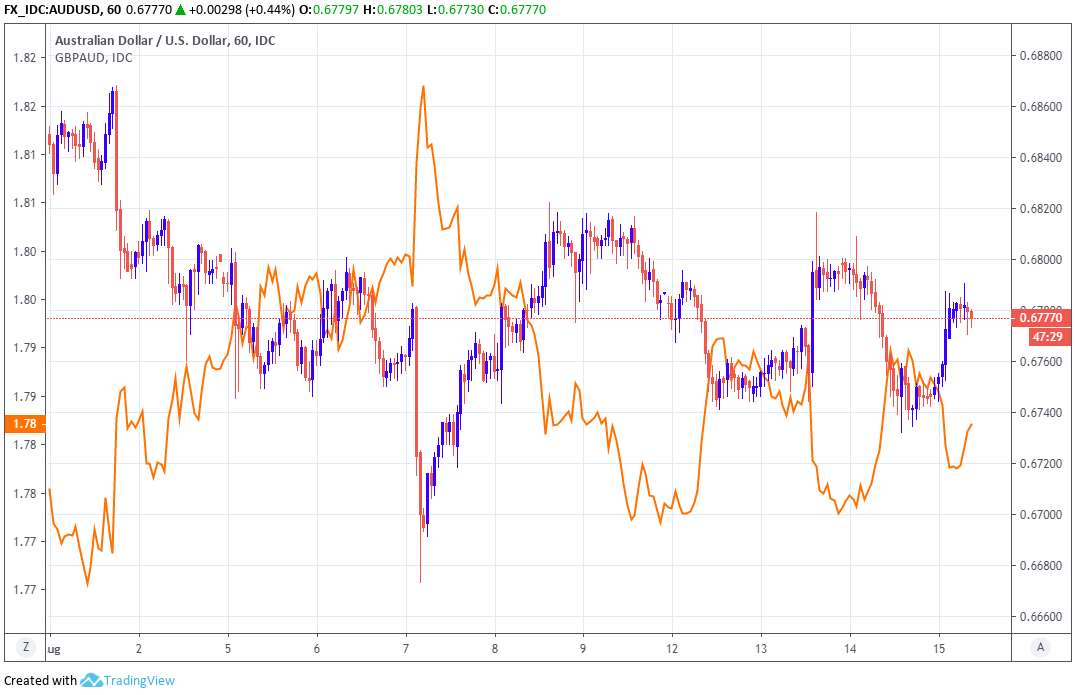 "Better US-Sino trade news and surging Australian employment have constituted fillips for the beleaguered AUD these past 48 hours. But the currency faces one or two appreciable hurdles on route to lasting recovery. Clearly, the dismal global economic outlook remains a thorn in the AUD’s side given Australia’s export-driven economy and its strong links with the world’s principal growth engine, China," says Neil Mellor, a strategist at BNY Mellon.

Thursday's data and resulting gains for the Aussie come hard on the heels of a punishing sell-off in global markets that hobbled the risk-sensitive currency, after industrial production and retail sales figures showed China's economy struggling in July and following official data that confirmed the German economy contracted for a second time inside a year during the second quarter.

Australia's Dollar is underwritten in no small part by a gigantic commodity trade with China, which leaves the Aussie and Australia caught between the rock that is a troubled China and the hard place that is a slowing global economy. The trade and commodity relationship explain the positive correlation between the Australian Dollar and China's currency, as well as why the Aussie tends to fall when fears for the global economy are on the rise.

"AUD/USD remains on the defensive near term, it has not overcome any resistance of note and continues to weigh on the downside. The market has recently eroded the .6738 January 2019 low and .6720, the 2016- 2019 support line (connects the lows) BUT did not CLOSE below here," says Karen Jones, head of technical analysis at Commerzbank. "We would allow for some consolidation/correction near term. Rallies will need to regain the .6832 June low as an absolute minimum in order to alleviate immediate downside pressure." 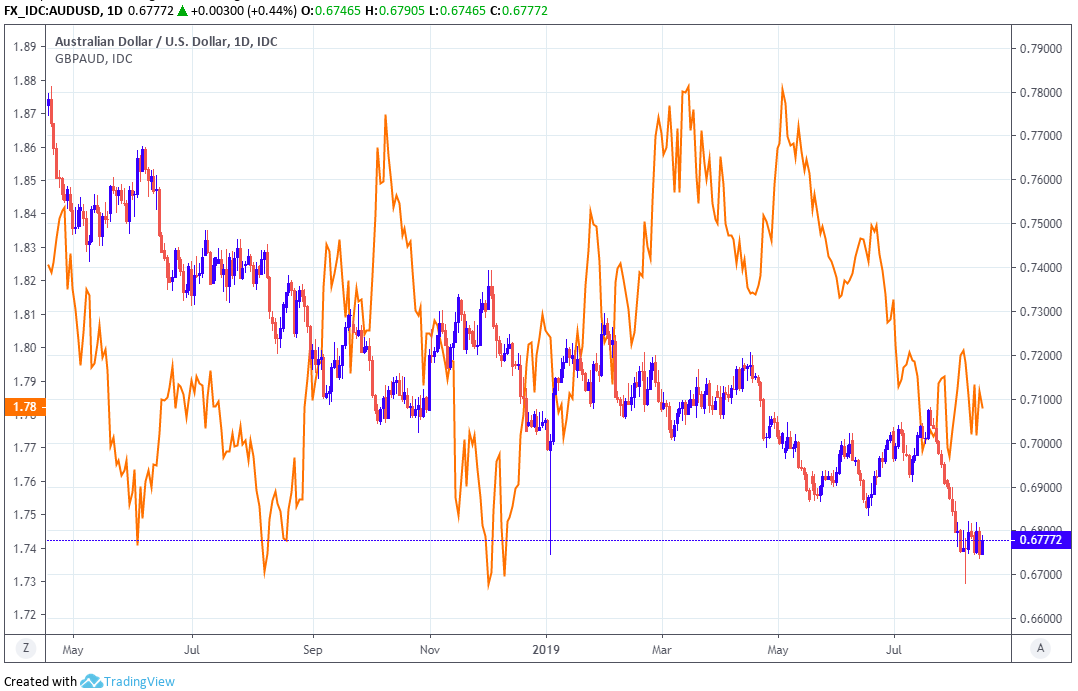 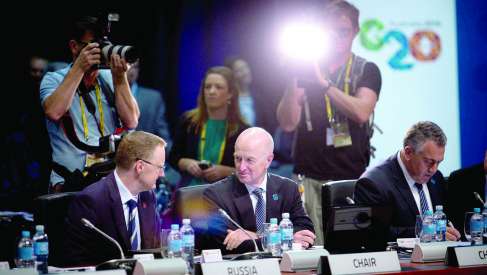 The Australian Dollar has already risen as far its likely to against both the Pound and U.S. greenback, according to Westpac forecasts, and a possible Reserve Bank of Australia (RBA) quantitative easing program remains a risk to the antipodean currency.