The Australian Dollar is escaping the bear trend that has gripped it throughout much of 2018, aided by a weakening U.S. greenback and the optimistic tone of the latest interest rate statement from the Reserve Bank of Australia (RBA).

RBA Governor Philip Lowe said Tuesday the economy is in good health thanks to a recovery in commodity prices and a supportive global environment, before lifting the central bank's growth forecasts.

Australian growth is now expected to average 3.5% in 2018 and 2019 before slowing a touch in 2020. This is an upgrade from the RBA's earlier projection that GDP would grow "a little over 3%" in both years.

A robust expansion in the U.S. and fresh stimulus from authorities in China have both contributed to the improved outlook for the Australian economy.

"The Australian dollar remains within the range that it has been in over the past two years on a trade-weighted basis, although it is currently in the lower part of that range," Lowe says, in an apparent nod to the steep losses wracked up by the Aussie this year.

The Australian Dollar had fallen more than 9% against the U.S. Dollar during the 10 months to the beginning of November, thanks to Reserve Bank of Australia interest rate policy, before events last week saw the currency correct higher.

It goes almost without saying the RBA held its cash rate at a record low of 1.5% again in November, citing below-target inflation. The bank wants to see the consumer price index rise sustainably above 2% before raising interest rates.

"The outlook for the labour market remains positive. With the economy growing above trend, a further reduction in the unemployment rate is expected to around 4¾ per cent in 2020. The vacancy rate is high and there are reports of skills shortages in some areas. Wages growth remains low, although it has picked up a little," Lowe told markets Tuesday.

Lowe and the RBA team say that a steady improvement in the economy and continued falls in unemployment will eventually lead to faster wage growth, which should also help lift inflation back within the 2% to 3% target band.

Australian inflation has speant most of the last five years below 2%, necessitating a steady pace of interest rate cuts to support the economy, which culminated in rates being cut to a record low in August 2016.

"The latest policy meeting sees the RBA remaining cautiously upbeat, but providing no clues about the next rate move. Having broken out of this year’s bear trend, AUD/USD could make a run at 0.7260 and 0.7315 in the short term," says Chris Turner, head of FX strategy at ING Group. 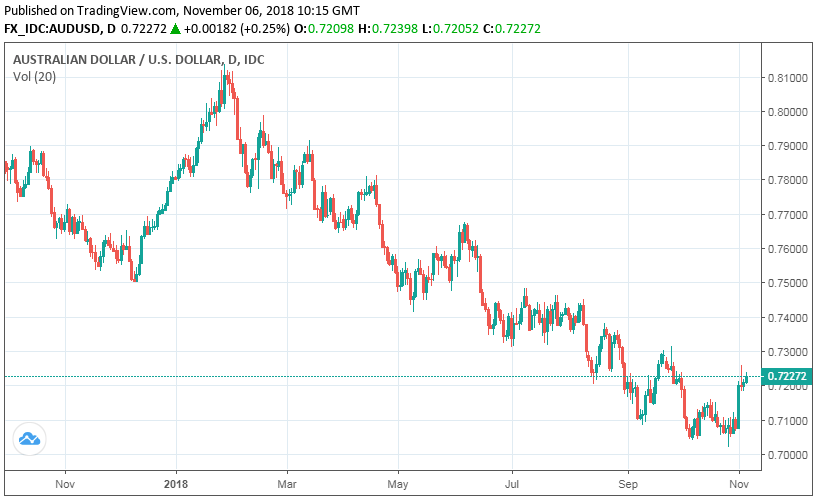 The AUD/USD rate was quoted 0.30% higher at 0.7232 during early trading Tuesday while the Pound-to-Aussie rate was down 0.25% at 1.8059. The Aussie was higher against all other G10 currencies for the session too. 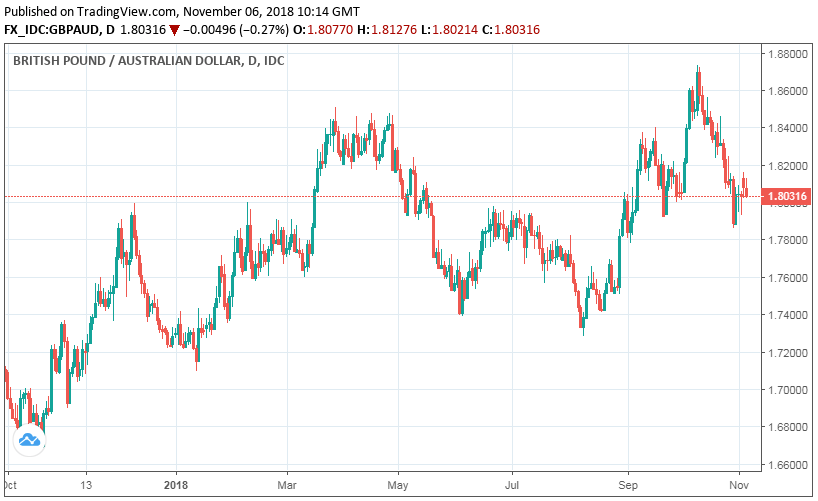 "AUD/USD is consolidating just below the top of the .7244 2018 channel - while capped here this will leave the market under overall pressure. However the risk has increased that we will see a close above here and we favour a break higher," says Karen Jones, head of technical analysis at Commerzbank.

Jones says that technical studies that measure momentum within an underlying market are pointing to continued gains for the Australian Dollar, which has risen more than 2% against the greenback in the opening days of November.

A daily close above the 0.7244 level would mean the Austrian Dollar's 2018 downtrend has been broken in a decisive manner, which could enable the current correction to extend all the way back up to 0.7474.

The optimistic commentary on the Aussie comes as Americans head back to the polls in order to determine the composition of congress over the remaining two years of the Trump presidency.

Some have labelled Tuesday's midterm elections as a referendum on President Donald Trump himself. And to a certain extent they are right because the elections could be the difference between whether the Democratic Party is able to impeach Trump or not.

"Most analysts believe that scenario will see the dollar and US rates dip on the view that chances for any further US fiscal stimulus are curtailed," ING's Turner says, in a note to clients Tuesday. "A Democrat Blue Wave of a win in both chambers might be tougher for the risk environment, where the market would turn to the politics of impeachment."

If the Democratic Party does as many are suggesting it will and it wins a majority in the House of Representatives then the U.S. Dollar could find itself on the back foot during early trading in London Wednesday, which is around the time the outcome of the election is expected to be confirmed. This would help spur the Antipodean currency on further.

However, if the Republican Party is able to upset the apple cart by clinging onto its majority in the House as well as Senate then the U.S. Dollar will have been granted a fresh lease of life, which could then see the Aussie forced into a renewed retreat on Wednesday.