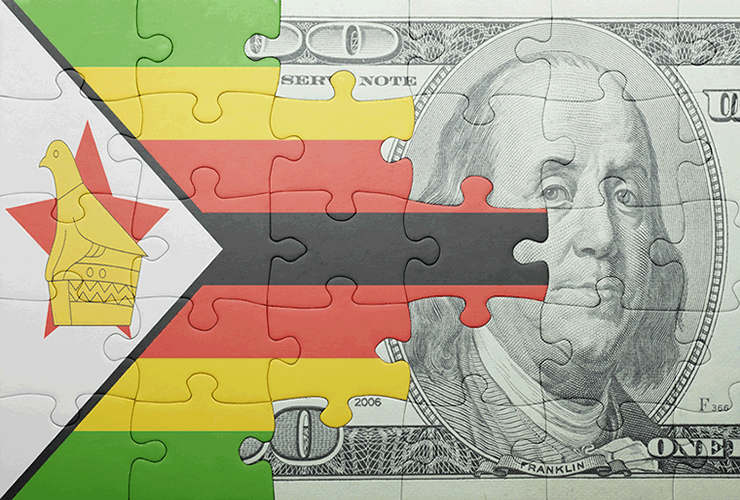 Zimbabwe should speed up the process of replacing the US dollar with the South African Rand, a move that could help the country lower domestic prices and increase international competitiveness.

2016 has seen an escalation of cash shortages in Zimbabwe - a country that is now almost exclusively a US dollar-based economy since the domestic unit was ditched in 2008.

Subsequent years have seen a move from a more diverse basket of currencies used in the country to a near total domination by the Greenback.

Whatever the composition of foreign currencies in use, a chronic lack of foreign investment remains the root cause of the cash shortage - a country that relies on foreign currency of course needs foreign capital flowing in.

The crisis ultimately requires a major policy about-turn from the government, however, shifting away from a reliance on the US dollar, to the South African rand, could well ease some of the pain and buy the government time to implement investor-friendly policies.

Shane Helberg, deVere Group’s Area Manager of Zimbabwe, Botswana and Mozambique, says he believes Zimbabwe’s adoption of the Rand as the main trading currency within the country’s multi-currency system should be championed.

deVere Group is one of the world’s largest independent financial advisory organisations, which has $10bn under advice from 80,000 mainly expatriate clients globally.

“Whilst the rand perhaps isn’t as weighty as the U.S. dollar for international trade as it’s more volatile against major currencies, it must be noted that the dollar has not been effective in arresting the freefalling economy in recent times. Using one primary currency, the rand, for commerce is likely to be beneficial for several key reasons,” says Helberg.

The following reasons are listed by Helberg as to why rand adoption should be championed:

1) It is better to move to using one single semi-convertible currency than a multiplicity of currencies at the moment as it reduces confusion and uncertainty.  Stability and certainty is always welcomed by foreign investors.

Should the move prove to be successful, we can expect further levels of foreign investment and, in turn, more expats moving to Zimbabwe.  Clearly, international organisations and people bring with them a raft of potentially enormous associated economic benefits to any host country.

As such, Zimbabweans and expats already in the country will be thankful that a single currency could replace the current variety of currencies used for the added economic stability it will likely generate.

2) The measure should also help boost trade links with South Africa, Zimbabwe’s major trading partner. This is especially importantly for Zimbabwe as it will make China, amongst others, more confident about investing in the country if it helps stabilise the economy.

3) It will increase Zimbabwe’s competitiveness in broader global terms as it will make exports cheaper.  Also prices in Zimbabwe will go down.”

The Reserve Bank of Zimbabwe has acknowledged that the use of the US dollar is proving problematic in that it makes the country:

a. A High cost producing country,
b. Very expensive tourist destination,
c. A fertile ground for capital flight and/or externalisation, and

Mr Helberg goes on to say:

“When the rand become the defacto currency of Zimbabwe, the country’s economic woes could seriously start to diminish.

“This would drive confidence in Zimbabwe as being a place to do business and invest.”

“These are exciting times and deVere is happy to be one major global brand that is currently using its resources to develop its presence in the country with its strategic and ambitious growth plans for the longer term.”

This takes us to the end of the second quarter, a quarter where sterling and eurozone stocks were the clear underperformers and where the yen, gold and oil were the notable gainers.

Some key markets have now recovered almost all of their Brexit losses, UK and US equities most importantly.

Sterling and the euro, by contrast, have taken a permanent hit to the benefit of the dollar.

The rand has ended up weaker against the dollar: USD/ZAR was at 14.40 prior to the Brexit vote, it is now 3% lower.

EUR/ZAR is right back to where it was last Thursday. GBP/ZAR has fallen sharply, yesterday pushing below the 20.00 level for the first time since August last year.