The Pound to South African Rand exchange rate entered the new week close to three-month highs but would risk slipping back toward the 19.50 level or below in the days ahead if the Dollar remains soft or negotiations over a disruptive labour strike at energy monopoly Eskom are succesful at curtailing disruptions to the electricity supply.

South Africa’s Rand was comfortably the worst performer in the G20 basket last week after the Dollar reached new multi-year against many currencies and the Rand itself was sold heavily amid strike action at Eskom that led to electricity supply disruptions.

“The market took this as a prime opportunity to sell the ZAR. With blackouts of over four hours occurring on most days, it is not surprising that market participants saw this as a major blow to the economic recovery of the country,” says Tim Powell, a director of forex at Sable International.

“There will be no noteworthy data from South Africa this week. The market will be only interested in the economic impacts of this loadshedding and how fast it can be reduced to fend off further economic pressures on the economy.

Eskom said via its Twitter account on Sunday that it hoped to reduce loadshedding to a less disruptive Stage 2 level by the weekend but that Stage 6 rolling blackouts would resume on Monday with variable degrees of disruption expected over the week. 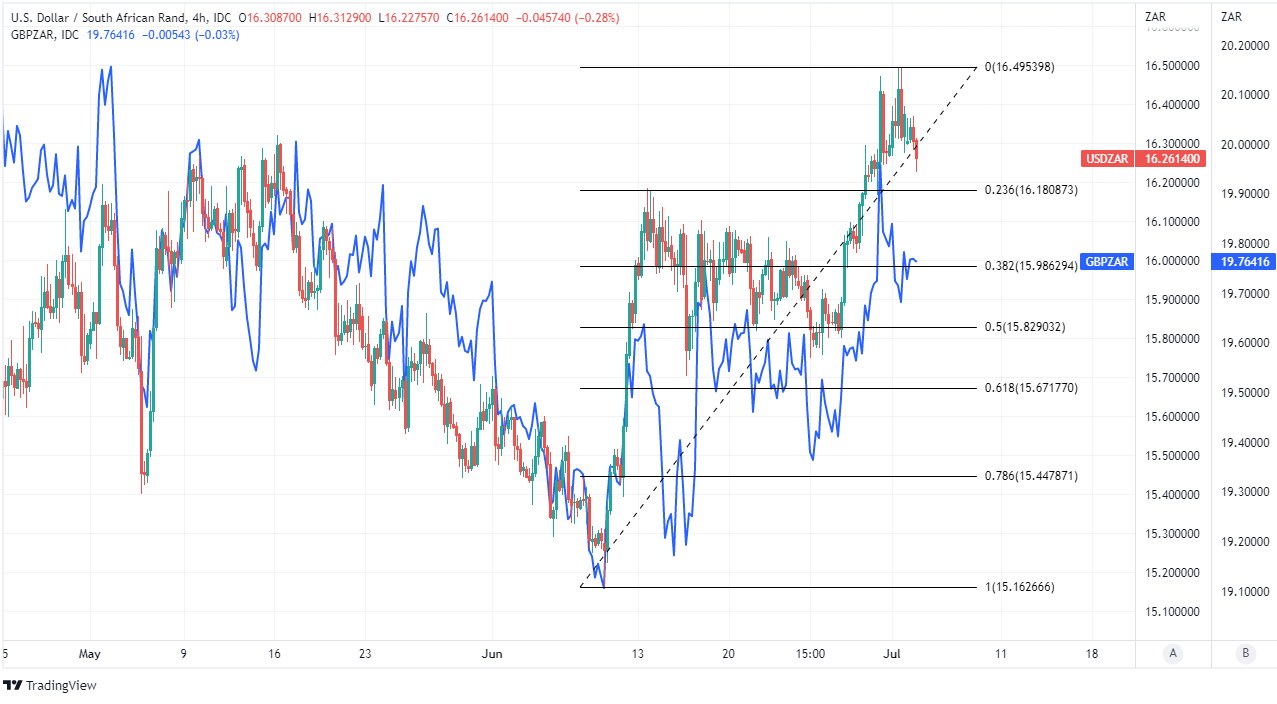 Eskom also cautioned at the weekend that it could “take a few weeks” for power generation to return to the levels that were typical ahead of last week’s strikes, which saw operational functions short-staffed and some crucial maintenance going unattended to, leading to widespread power shortages.

“Eskom workers seeking to achieve well above inflation wage increases (of 10-12% with CPI inflation at 6.5% y/y) is damaging the functioning of the electricity system, with load shedding expected to continue this week and next, and a wage settlement not yet reached,” says Annabel Bishop, chief economist at Investec.

“The current severe degree of load shedding is not expected to continue over Q3.22, but if it did it would collapse the South African economy into recession, after the contraction that is expected to have occurred in GDP in Q2.22,” Bishop also said on Monday.

Local media reported on Monday that wage negotiations between Eskom and its highly unionised workforce are continuing and that the outcome could be known as soon as Tuesday, and this could matter greatly for the Rand.

“The rand has lost significant ground over the course of the past week, trading from a best level of 15,7700 on Monday and having touched a high of 16,4950 on Friday,” says Walter de Wett, a fixed income and currency strategist at Nedbank.

“The rand’s technical indicators have recovered marginally and are currently in neutral territory. Possible trading range for the rand today: 16,1500 to 16,6500,” de Wett and colleagues also said on Monday. 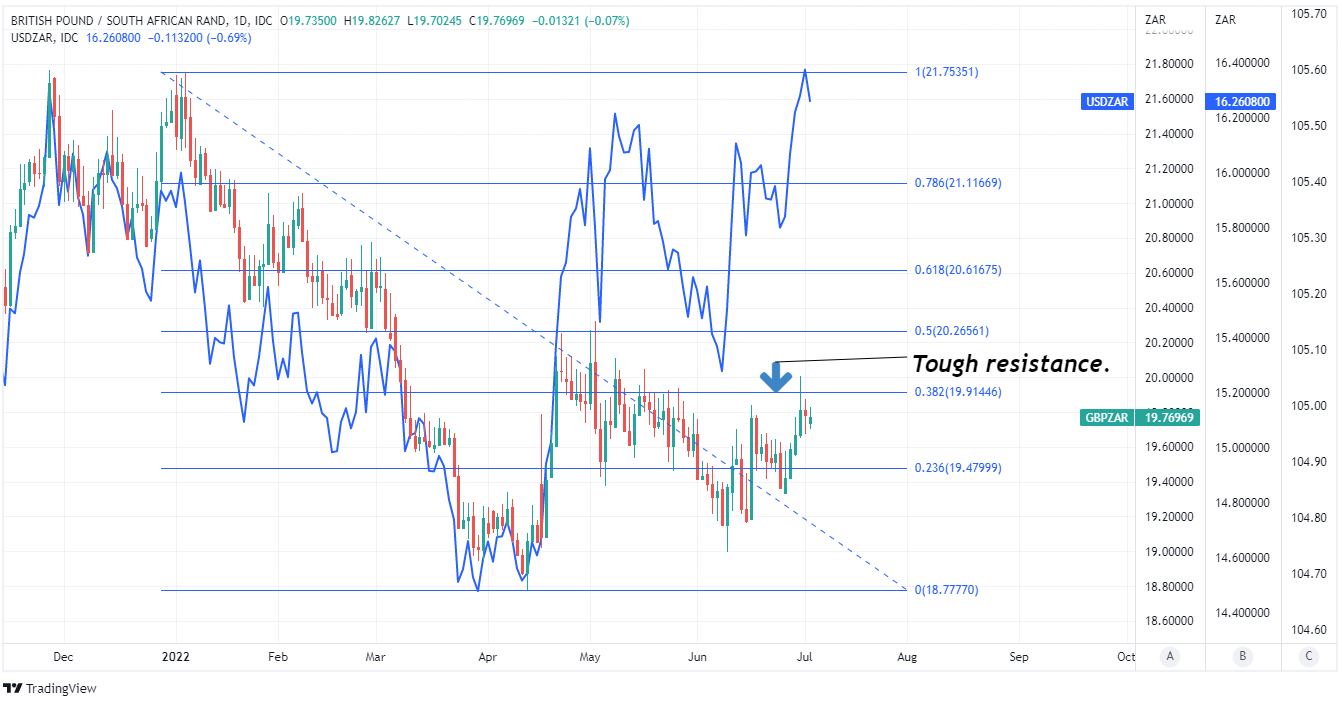 Above: Pound to Rand rate at daily intervals with Fibonacci retracements of 2022 downtrend indicating short and medium-term technical resistances for Sterling, and shown alongside USD/ZAR. Click image for closer inspection.

GBP/ZAR tends to closely reflect the relative performance of Sterling and the Rand when each is measured against the Dollar and would potentially fall as far as 19.47 if a favourable resolution at Eskom leads USD/ZAR to unwind last week’s rally.

However, the risk is of GBP/ZAR remaining more buoyant than this if the negotiations fail and disruption to energy supplies and the economy continue.

“The Rand has been hit by the following factors: a) commodities sell-off (BCOM index is down 15% over the past month), b) Eskom’s power cuts, exacerbated by unions’ strikes and c) news about Ramaphosa being involved in corruption,” says Yuliya Khrzhanovska, a trader at Credit Suisse.

“Expect ZAR to remain on the back foot. On the franchise front we have seen elevated client activity, largely dominated by [hedge fund] $ buying (likely stop-loss driven),” Khrzhanovska and colleagues cautioned in a Monday trading desk commentary.

There is little in the domestic calendar to draw the attention of the Rand this week, which likely leaves the currency fixated on energy supply risks and otherwise taking its cues from international factors like the flurry of U.S. economic data and appearances by Federal Reserve policymakers due in the days ahead.

U.S. data includes the Institute for Supply Management PMI survey of the services sector on Wednesday and the June non-farm payrolls report on Friday, each of which will potentially impact market expectations for U.S. and global economic growth with possible implications for the Dollar and correlated currencies. 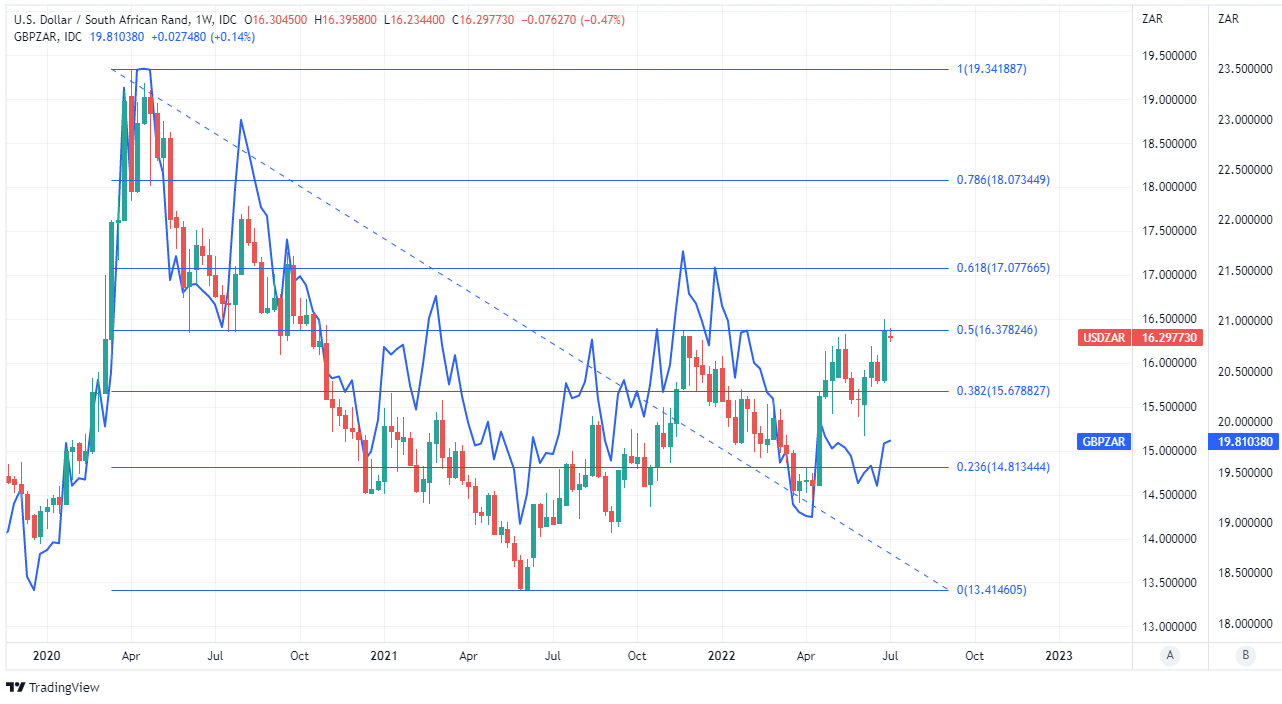 Above: USD/ZAR at weekly intervals with Fibonacci retracements of 2020 downtrend indicating short and medium-term technical resistances for U.S. Dollar, and shown alongside GBP/ZAR. Click image for closer inspection.