Swiss based investment bank Credit Suisse have lowered their forecasts for the South African Rand, saying the stellar run of 2022 is coming to an end.

2022 has been kind to Rand 'bulls' with the currency rising in value against all the G10 majors as well as developing market peers.

Only Brazil's Real has scored an advance against the South African unit.

That the Real and Rand are leading the pack is testament to the market's desire to own commodity currencies in an environment of surging commodity prices.

South Africa's commodities exports have driven a surplus in the country's current account, which is essentially its bank balance with the rest of the world. Analysts view such a situation as being fundamentally supportive of a currency.

Credit Suisse and other analysts have noted foreign investors are also buyers of South African equities, showing a preference for companies exposed to the commodities boom.

But they also cite a favourable development in domestic governance for the Rand's performance: "in recent months for many investors South Africa’s fiscal position has become less of a point of concern thanks to outperformance in tax collections."

But Credit Suisse sees the expansion of the current account as being complete and its recent narrowing - see below - could weigh on ZAR. 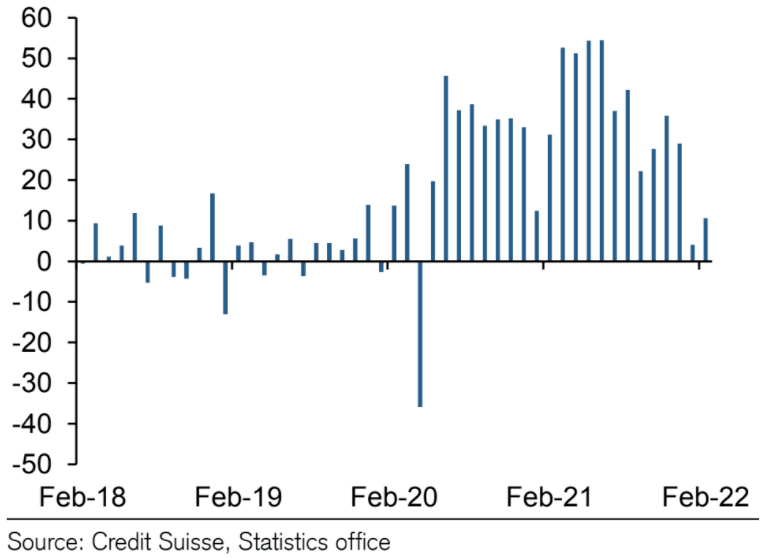 "The current account, while is still most likely in a surplus, has been deteriorating so far this year. The two-month average of the foreign trade balance for January and February was the lowest since the early part of the pandemic," says Mevorach.

The South African economy is a net exporter of fuel and surging oil prices will exact a negative impact over coming weeks and months.

"Following a long period of outperformance against the EM FX complex and presumably positioning build-up, the rand has become exposed to changes in global sentiment – such as a possible reversal in the growth/value rotation flow in global equities," says Mevorach.

But Credit Suisse are by no means calling a major turn lower in the value of the Rand, saying the underlying resilience that the rand has been displaying in recent months suggest a new trend of weakness is unlikely.

As a result Credit Suisse raise their USD/ZAR forecast target range slightly to 14.50-15.50 and drop their short-term target of 14.30.