South Africa's embattled public purse and elevated prospects of further credit rating downgrades this year are among the factors expected to continue holding back the currency over the coming months, with concerns likely to be at their most acute ahead of the late February budget.

Finance Minister Tito Mboweni will update the market with Treasury's latest economic and financial forecasts in February and given the ongoing pandemic investors may continue to give the Rand a wide berth ahead of the event due to scope for further large increases in spending, lower tax revenue forecasts and additional borrowing to be announced. Such outcomes could make further downgrades to South Africa's 'junk' rating all but certain.

THOUGHTS OF THE WEEK. 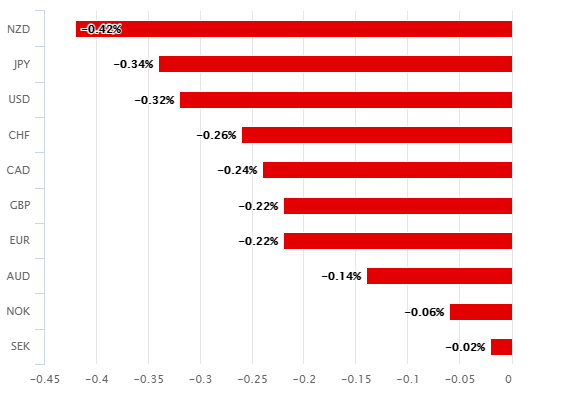 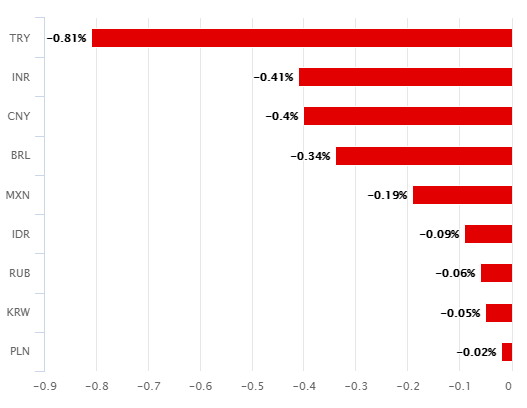 "SA’s high debt trajectory and path to single B credit ratings maintains pressure on the domestic currency," says Annabel Bishop, chief economist at Investec. "Moody’s next country review is likely around the end of this quarter, and this could see SA drop to ba3 (BB-) at that time, and while Fitch does not give a date for its review, it is normally around the same time with the negative outlook from Fitch signalling a downgrade to B+. SA could fall into the single B credit rating category from Fitch as early as the end of March, and S&P also has SA on BB-, with the next rung down B+. S&P’s review is also likely after February’s Budget."

Mboweni said in October that South African debt-to-GDP is likely to top out at 95.3% in 2025/26, later than previously forecast, which is also the delayed point at which the optimistic finance minister hoped to deliver a primary budget surplus. Keeping South Africa on course for a balanced budget may not be possible without further spending cuts and increases in taxes, which would all act as near-term headwinds for the embattled economy.

South Africa was already stripped of its last remaining ‘investment grade’ credit rating in March, rendering it a ‘junk’ borrower in a decision that preemptively weighed on the Rand for months beforehand, although some fears are that pandemic-related borrowing will lead to further downgrades.

Without measures like public sector wage freezes and higher tax income, rating agencies could downgrade South Africa again, leading to higher bond yields and financing costs as well as potentially increased inflation and interest rates further down the line. Uncertainty over the budget and its implications for ratings will be a key influence on the Rand over the coming weeks. 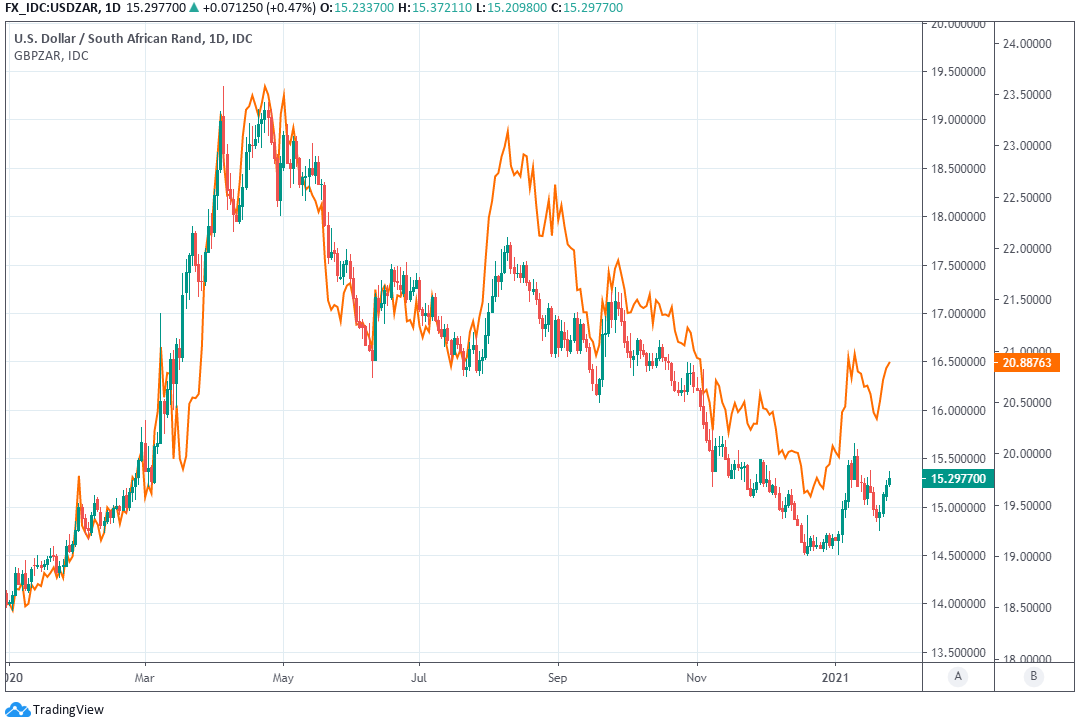 So too will an international environment that has recently enabled the U.S. Dollar to stabilise, posing as a headwind to emerging market currencies.

"Against the backdrop of our expected rise in US yields, which should lead to a firmer USD in the short term, we see USD-ZAR under upward pressure in the first half of the year. We have adjusted our exchange rate forecasts accordingly. In the second half of the year, the tide should then turn as a result of (global) vaccination successes and a recovery of the world economy," says Elisabeth Andreae, an analyst at Commerzbank. "Nevertheless, in view of the fragile domestic economy, which was already in recession before the outbreak of the pandemic, we continue to see only limited ZAR appreciation potential."

Commerzbank's Andreae tips a USD/ZAR increase to 15.30 by the end of March and 15.50 before mid-year.

Investec's Bishop sees USD/ZAR averaging around 15.0 this quarter ahead of an anticipated climb to 15.40 in the three months to the end of June.

Commerzbank forecasts the Pound-to-Rand rate will trade up to 21.13 before the end of the first-quarter before dipping back to 21.08 in time for mid-year, while Investec looks for GBP/ZAR to fall to 20.20 before returning to 20.79.

"The medium-to-longer-term outlook also remains subdued. Key factors are insufficient investment and a lack of structural reforms. Even before the Corona crisis, unsustainable public finances led to the loss of investment grade ratings by all three major rating agencies. Since then, further downgrades have followed. Against this background, we continue to see the economy and currency as vulnerable," Andreae says. 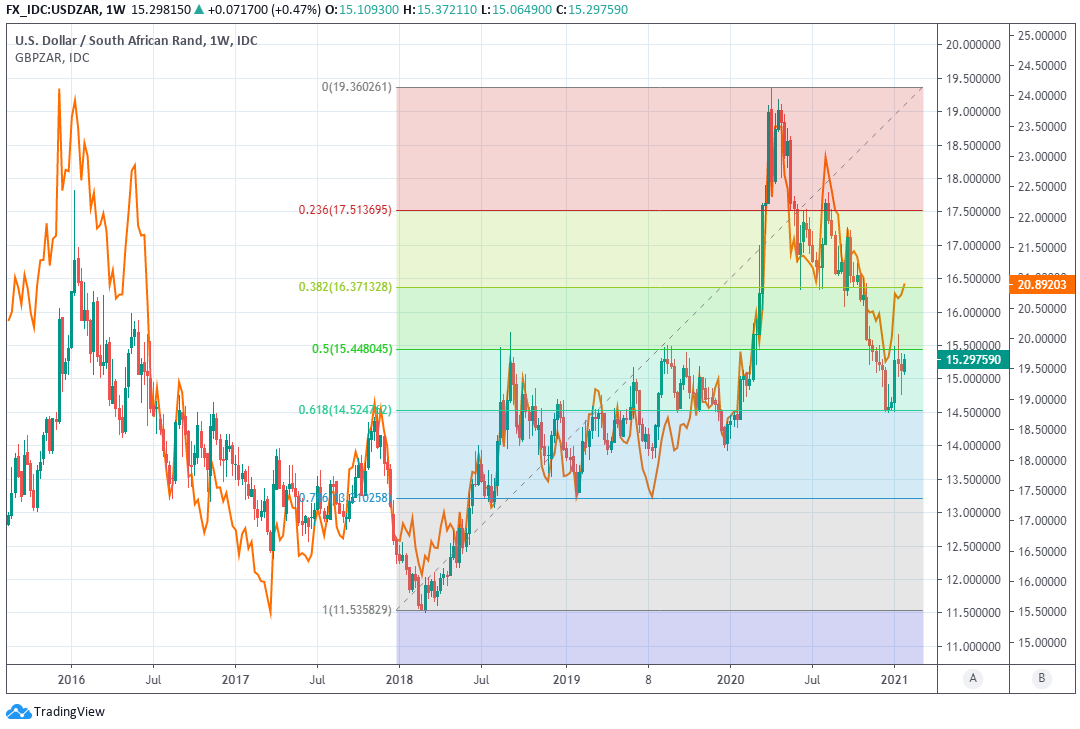 Above: USD/ZAR shown at weekly intervals with Fibonacci retracements of 2018 uptrend and GBP/ZAR (orange line).