South Africa’s leading business cycle indicator rose by 3.7% in August, building on the 2.6% increase seen in July, with all of the indicator’s main components signalling an expansion of economic activity midway through the third quarter.

“There was little to report overnight, but we’d like to call your attention to Citi Economics’ latest,” says Kurran Tailor, a strategist at CitiFX. “Our GDP tracker suggests a Q3 rebound of around 55.9%QoQ saar which is above the SARB’s September projection of 45.2% QoQ saar and thus, the SARB is likely to revise up its Q3 projection at its November MPC meeting, in our view.”

Continued gains for South Africa’s leading indicator follow a faster-than-anticipated recovery of retail spending for August and have contributed to increased optimism about the economy’s recovery prospects.

Prices of South Africa’s export commodities improved in August while business confidence rose, job advertisements and vehicle sales all rose. The manufacturing sector also experienced a thaw, with order books beginning to expand and the number of hours worked rising.

"Green shoots of recovery are strengthening, and evidence from other incoming data is showing that the rebound in the economy in Q3.20 may even prove stronger than anticipated, although it is also important to note that only two months’ worth of data are generally available for the third quarter currently," says Annabel Bishop, chief economist at Investec.

South Africa’s economy shrank by -51% quarter-on-quarter in the three months to the end of June and by -17.1% year-on-year as activity was restricted in order to contain the coronavirus, which was a larger than expected fall that led the South African Reserve Bank (SARB) to downgrade its forecast for the full-year contraction to -8.2%, from -7.3% previously.

Data available so far has shown the recovery taking hold in the first two months of the third-quarter while South Africa’s economy fully reopened the subsequent month in September when the country moved to the lowest level of coronavirus-related restriction, known as Alert Level 1. That could mean the economy finished the quarter as strongly as it started.

But with the Rand still trading near to its highest against the Dollar since the pandemic began, the downside may now be greater than the upside even in light of brighter economic prospects. Especially as the government’s latest budget and economic forecasts are due to be released on October 28, which will bring the market’s focus back to South Africa’s deteriorating financial position, which will remain a burden no matter the pace of recovery. 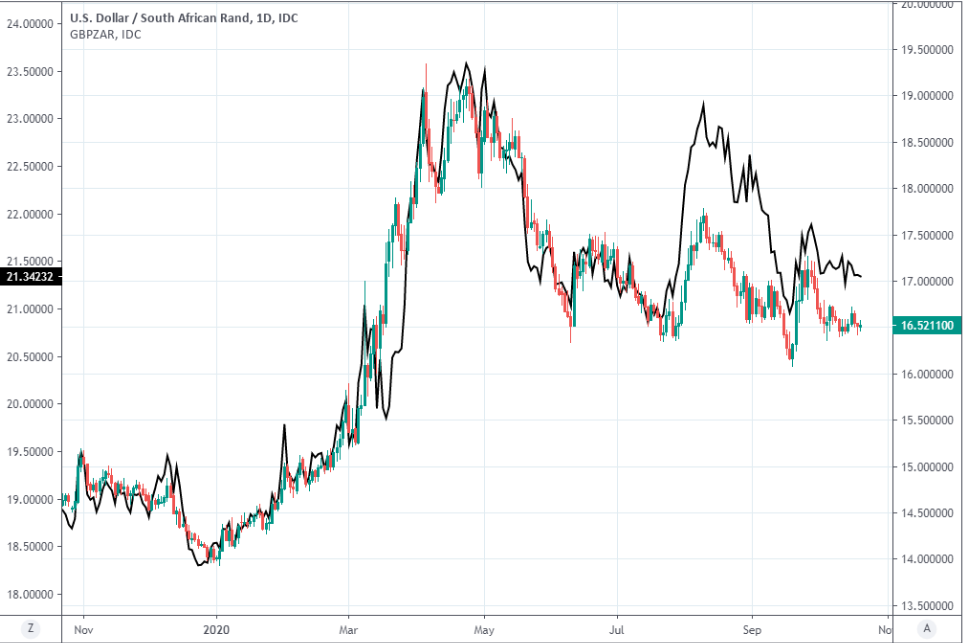 “The rand would likely depreciate markedly on shifting to a debt peak of 100% of GDP. A 100% of GDP, or higher, is not deemed at all sustainable for an emerging market, and SA will be viewed no differently,” Investec’s Bishop says. “The rand is also at risk of negative market sentiment from external factors, as US fiscal stimulus approval continues to drag, while Brexit and the US elections pose further risk for volatility in the period ahead.”

The close proximity of the medium-term budget and poor government track record at delivering reforms saw President Cyril Ramaphosa’s economic reconstruction and recovery plan go largely unrewarded this week, with investors weighing the risk that disappointing debt forecasts are unveiled at month-end rather than rewarding another ambitious strategy to structurally reform the economy, reduce unemployment and lift economic growth.

This is after Finance Minister Tito Mboweni set out in June a plan to deliver a primary budget surplus before 2024 as part of a supplementary budget that hit all of the right notes with the market.

He promised "tax measures" worth R40bn, said Eskom will need to show progress in meeting the milestones as laid down in the Roadmap," before it gets more public cash and that government should abide by its newly adopted strategy of "zero based budgeting" that requires all expenditures to be individually justified or face the axe.

"Lifting the planned stabilisation point for SA’s debt trajectory even higher (with the MTBPS now expected on 28th October at 2pm) to potentially 100% of GDP, instead of 87.4%, will add to substantial pressure for further marked downgrades of SA’s credit ratings," Bishop says. "Rating agencies would not view such a planned deterioration in SA’s debt metrics as being outweighed by the ERRP’s plans to stimulate economic growth, repair SA’s fundamentals and reduce unemployment.

Mboweni also suggested that by 2023/24 South Africa could stabilise its debt-to-GDP ratio at 87.4% of GDP despite a budget deficit that is now expected to more than double from 6.8% of GDP in 2019 to 15.7% in 2020. However, recent speculation in the market has suggested that October 28 may see Treasury warning of a debt-to-GDP ratio that’s seen as likely to exceed 100% over the coming years, with adverse consequences for the Rand.

Investec has warned of volatility ahead for Rand exchange rates but forecasts a year-end finish for USD/ZAR around its Tuesday level at 16.50, but a Pound-to-Rand rate that rises to around 21.52.