Consensus is looking for the SARB to cut the cash rate from 6.25% to 5.75% at 13:00 London time, although the move is not fully priced-in by the overnight-index-swap market so an actual cut could lead to another knee-jerk move lower in the Rand on a day when the USD/ZAR rate was already up 2.2% by some measures, at 17.35, while the Pound-to-Rand rate traded 1.39% higher at 20.12.

The National Institute of Communicable Disease said Wednesday there were 116 known cases of coronavirus in South Africa, up from zero on March 05. And the SARB's decision will follow a wave of government and central bank actions designed to support companies and households within coronavirus affected economies.The European Central Bank announced overnight it will launch a Pandemic Emergency Purchase Programme (PEPP) of quantitative easing that will see Christine Lagarde's Governing Council buy an additional €750 billion in European government and corporate bonds before the year is out.

Meanwhile, the Canadian government announced a C$27bn spending package and a C$55bn set of tax reliefs designed to improve liquidity in the private sector. Those measures were announced as the U.S. senate passed a similar coronavirus package and came ahead of further monetary measures taken by the Reserve Bank of Australia among others.

"The rand was among the worst hit yesterday, breezing through 17.00 against the greenback with ease," says Nema Ramkhelawan-Bhana, an economist at Rand Merchant Bank. "I’ve never quite understood the phrase to throw everything at it but the kitchen sink. That is, until now. A frenetic emptying of war chests is underway globally as policymakers consider any and all means possible to counter the damaging effects of the coronavirus on economic and financial market activity....The question is: are SA policymakers willing to throw everything at it including the kitchen sink?" 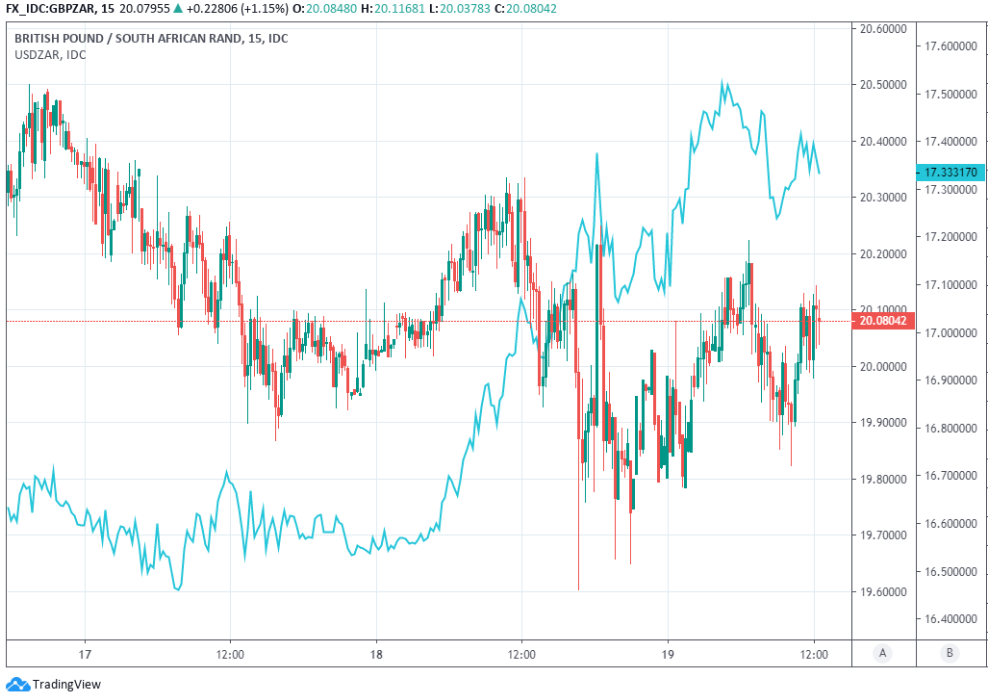 The Rand has been bruised in the exodus from risk assets as investors liquidate portfolios in a manner rarely if-ever seen before in modern times, with traditional risk assets like stocks and commodities being hammered while even typical safe-haven assets like government bonds also hemorrhage capital. Panic in financial markets is benefitting the U.S. bond market and Dollar to the detriment of all other currencies including South Africa's.

But some analysts say losses could continue to mount on Thursday and in the coming days if the South African Reserve Bank joints the rate cut club as consensus suggests it will do. The SARB was already under pressure to support the economy before the coronavirus crisis left China, as it struggled amid a global slowdown and domestic recession that was exacerbated by Eskom's inability to keep the lights on without interuption from the rolling blackouts brought on by load-shedding.

"In early March the covid-19 pandemic reached South Africa and is thus affecting a “patient with pre-existing conditions”. The economy is already in recession," says Elisabeth Andreae, an analyst at Commerzbank. "We therefore also see a high likelihood of a 50bp rate cut. The SARB is likely to make clear though that it is keeping an eye on possible inflation risks and will take action if necessary. Due to corona related high uncertainty, further rand losses seem likely even though a large rate step is largely priced in." 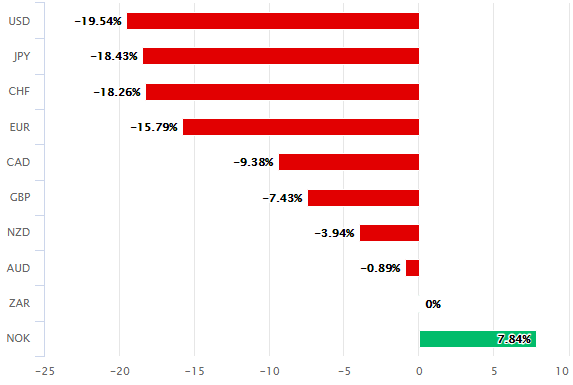 South Africa already had a full plate before the coronavirus marched on all four corners of the globe but now it’s facing the prospect of an economically crippling containment effort that takes place in depths of recession and with ratings agencies watching on. A stretched public balance sheet and concerns about the rating agencies could hamper the government's ability to support the economy in the event of a major coronavirus outbreak.

Moody’s will decide whether to cut the rating to ‘junk’ at month-end and if it does the Rand's headache could then become a migraine because it would force some international investors into selling their government bonds, potentially leading to even larger outflows from the Rand at a time when fund managers are already fleeing the developing world in their droves and flocking toward the perceived safety and the liquidity of the U.S. Dollar and bond market.

South Africa's economy had a rising budget deficit and already-too-high debt level to begin with but the outlook for these and the credit rating could become even more precarious now President Cyril Ramaphosa has declared a state of emergency and advocated 'social distancing' to combat a potential African epidemic. Those techniques have radically reduced footfall on high streets and in the hospitality sectors of all countries where they've been implemented while also disrupting the usual operations of other business sectors.

"The economy is likely to continue shrinking at least in the first two quarters of 2020. A rapid and significant easing of monetary policy might dampen the corona related effects on the economy," Andreae says. "The markets are clearly expecting the SARB to go large too. Not an easy decision to take in particular as Moody’s rating review is still due. Both are putting pressure on the rand and the depreciation pressure is likely to continue for now." 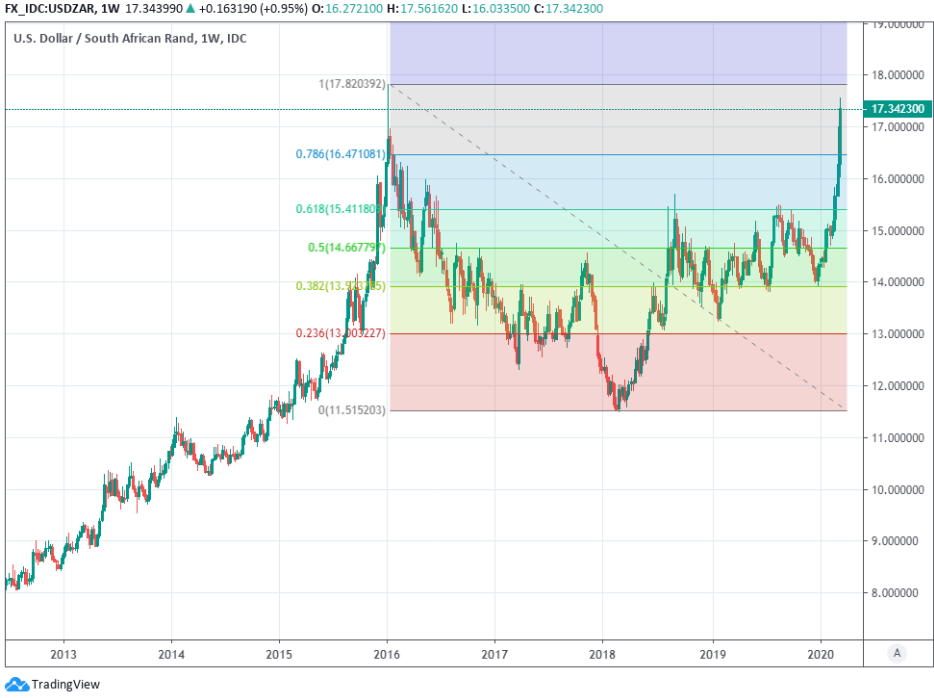 Commerzbank had forecast the Rand would fall 16.80 against the Dollar by the end of March, a target that has since been exceeded, before recovering to 14.80 by year-end. The Pound-to-Rand rate is forecast to hit 22.52 by the end of this month before falling to 19.40 in time for year-end. However, these forecasts were last reviewed in February and could now be likely to change in light of the spread of coronavirus into South Africa and all major economies.

USD/ZAR rose 3.21% to a new record high just above 17.00 on Wednesday, although some data providers suggest the peak actually up around 17.80, after surging back above the 78.6% Fibonacci retracement of the January 2016 downtrend earlier in the weeek. It’s now tipped by Commerzbank technical analysts to consolidate just under the 17.0 level from ahead of an ancipated move lower over the coming weeks. 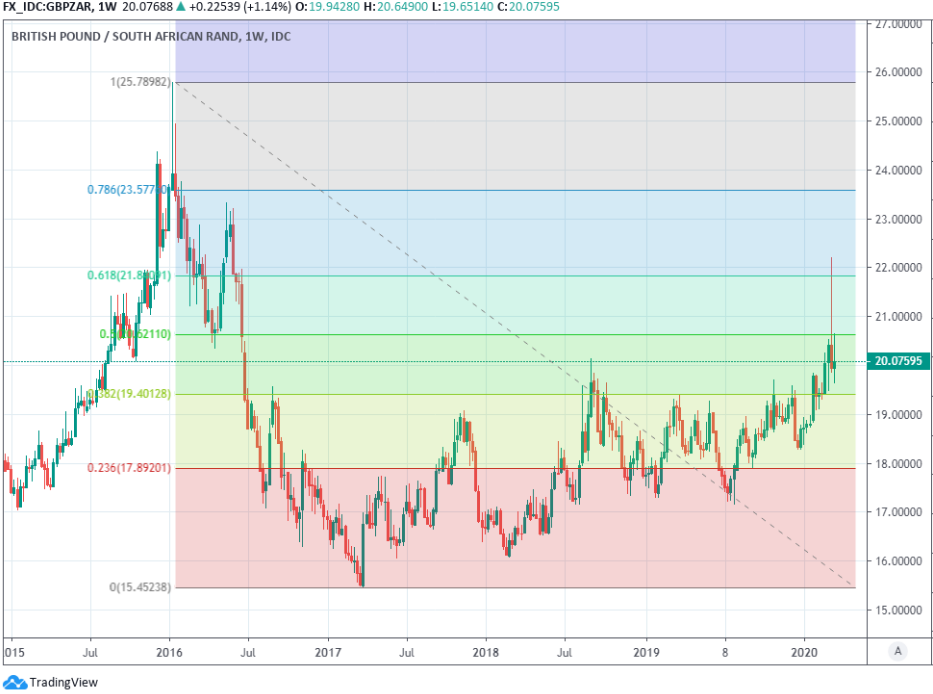 Above: Pound-to-Rand rate shown at weekly intervals, attempting to clear the 50% retracement of Jan 2016 downtrend.

The Pound-to-Rand rate has remained comfortably above the 20 handle even after last week’s failed attempt to break above the 50% retracement of the January 2016 downtrend. That attempt saw Sterling briefly trade back above levels that were last seen before the Brexit referendum, although whether it makes a second attempt might depend heavily on domestic coronavirus developments and events on the ground in South Africa.

“While there are many casualties, the pound has been hit hard. It’s fallen from $1.31 a week ago to a 35-year low of $1.15. The UK Government’s relatively laissez-faire approach to “social distancing” and the risk of the UK leaving the Brexit transition period without a trade deal at the end of the year may be contributing factors. But the UK’s 5% of GDP current account deficit, which was funded previously by inflows of investment into stocks and bonds that have now dried up, is surely the most important factor. It suggests that the fall in the pound won’t be reversed until investors are much happier,” says Paul Dales, chief UK economist at Capital Economics.