- IMF says slow pace of reform to weigh on economy.

The Rand underperformed on Tuesday as investors bought the Dollar while also responding to another decline in the South African Reserve Bank (SARB) leading indicator of GDP growth, although analysts analysts at MUFG have tipped the currency for more losses in the weeks ahead.

The SARB's leading indicator of economic growth fell sharply this summer and has been plotting a staggered decline on the charts ever since the beginning of 2018. The data suggests an economic slowdown is likely to hit South Africa in the second quarter of next year, according to some economists.

"While this is just one set of figures, they are nevertheless of concern as they indicate a Q2.20 slowdown where the first quarter of every year has contracted in SA since 2016. Furthermore, GDP growth for Q3.19 is now at risk of coming out closer to 0%," says Annabel Bishop, chief economist at Investec. "Next year, growth will likely be closer to 1.0% y/y than 1.5% y/y, as structural reforms lag." 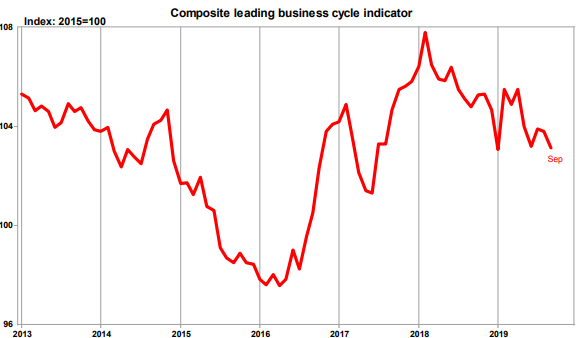 September's business cycle indicator hit the market just as investors were digesting the latest dire assessment of South Africa's economic prospects by the International Monetary Fund (IMF) and as the country's creditworthiness came under scrutiny at a major ratings agency.

And with the national debt-to-gdp ratio already set to rise sharply and to unprecedented levels in the coming years, the last thing that markets wanted to hear on Tuesday is that slower growth might be likely in 2020.

The IMF said South African economic growth will be below the rate of population growth for the sixth year running in 2020, further exacerbating pressures on the jobs market and society, while S&P updated its outlook on the country's already-sub-investment-grade credit rating on Tuesday, although it's Moody's that matters most. Business Day has more about S&P's decision.

Moody's, the last remaining agency to still have South Africa as an 'investment grade' borrower, could cut the nation's credit rating to 'junk' as soon as February in a move that would risk inciting potentially-significant outflows from the Rand because some fund managers would then be prevented from holding local government bonds in their portfolios. It wants to see a credible plan to right the country's finances including measures to reduce the burden of state-owned-enterprises on the public purse. 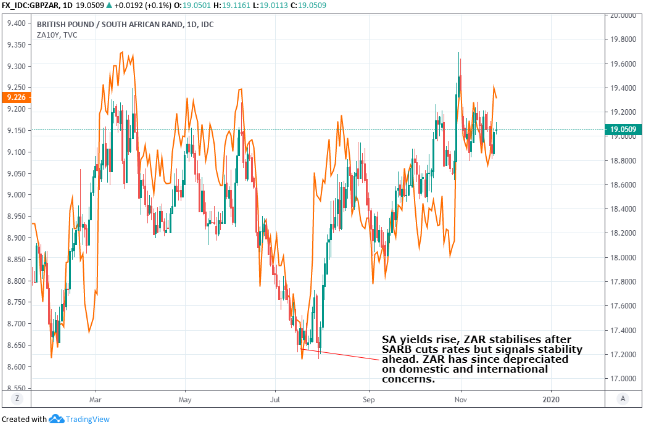 Investors have focused only briefly on South African domestic fundamentals in recent months because markets, especially those for so-called risk assets like the Rand, have been supported since early October by hopes of an imminent end to the U.S.-China trade war - although the reaction to October's budget update was brutal.

With the post-budget spike up to 15.12 put to one side, the Rand had performed strongly so far in the final quarter after President Donald Trump said on October 11 he'd reached a 'phase one deal' to temporarily end the trade war with China and the Federal Reserve (Fed) cut its interest rate for a third time this year.

Both the U.S. and China claimed this week that a 'phase one deal' is not only doable but also within reach, though markets increasingly doubt that it will be done by year-end. The tariff fight has led to slower growth the world over including in South Africa while high U.S. interest rates had been a financial and economic burden for longer.

"The recent combination of very low volatility and ongoing improvement in global invest risk sentiment has been supportive for the rand. However, we are starting to see the first cracks emerge as the improvement in global investor risk is challenged by the weak global data flow and more caution over a US-China trade deal," says Fritz Louw, a currency analyst at MUFG. "Recent outperformance has resulted in the rand becoming more overvalued and increasing the risk of a more powerful reversal lower when the tide turns." 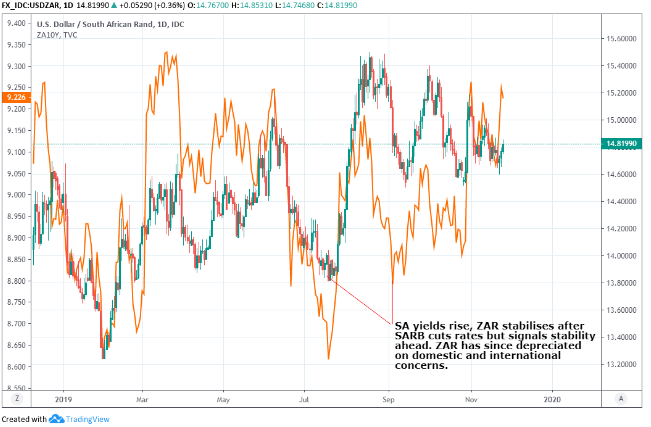 MUFG, the world's fifth largest lender and a significant currency dealer, said late last week that recent gains have taken the Rand to levels that are favourable for those wanting to bet against the South African currency.

Analysts in the bank's London office advocated that clients bet on an increase in the USD/ZAR rate from 14.68 to 15.10 in the weeks ahead, which would take the Rand back to its post-budget low against the Dollar, although they're not alone in their bearish view on the South African currency.

"EM currencies that are linked to the stronger EUR performance should do well," says Hans Redeker, head of FX strategy at Morgan Stanley. "We expect South Africa to decouple to some extent from the global story due to its weak domestic outlook, and so we see ZAR weakening throughout 2020."

Concerns about the credit rating and South African economic outlook are exactly why U.S. banking behemoth Morgan Stanley tips the Rand to decline throughout 2020 even as other emerging market currencies ride the coattails of a rising Euro, which is forecast to have reached 1.16 against the Dollar by the time next year draws to a close. The USD/ZAR rate is forecast to end next year all the way up at 16.0 while the Pound-to-Rand rate is seen ending 2020 at 21.60. 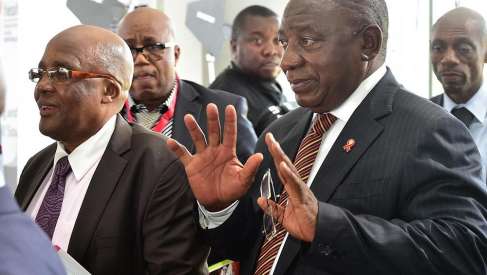