- ZAR aided in advance by SARB signal of steady rates.

- Keeps floor of support under SA bond yields and ZAR.

- But domestic challenges make for a dire 2020 outlook.

The Rand extended gains over the Dollar and Pound Thursday after the South African Reserve Bank (SARB) signalled interest rates will remain steady in the year ahead, prompting an upturn in government bond yields that pulled the currency higher, although some forecasts suggest the 2020 outlook is dire.

South Africa's central bank left its cash rate unchanged at 6.5% Thursday, in line with expectations, and tipped market's that its predictive models are recommending a stable cash rate until the final quarter of 2020. Three policymakers voted to hold the cash rate steady while two voted for a cut of 25 basis points in November.

Inflation has declined amid a soft domestic economy while oil prices have risen and the currency has fallen, leading the SARB to believe risks around price pressures are currently "balanced". However, the bank says risks to the growth outlook are tilted to the downside, although it stopped short of cutting rates.

"FRAs price in a full cut at the 30 January meeting (-24bps) and a further 10bps by September 2020. In Q3 2020, the market starts to see the trajectory of SARB's repo rate reversing, in order to end 2021 only 13bps below current levels at 6.37%. From our perspective, we think the SARB will have to keep rates unchanged throughout this whole period. Risks, however, push in opposite directions for the short- and the long-terms," says Cristian Maggio, head of emerging market strategy at TD Securities. 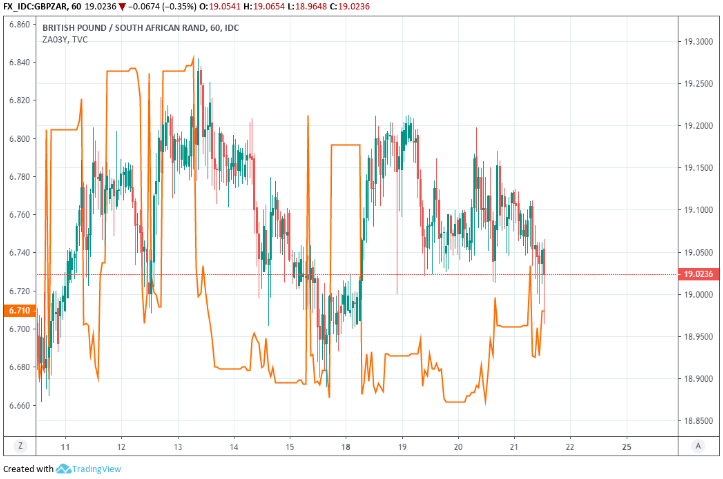 The SARB cut its interest rate from 6.75% in July but suggested strongly to markets that further rate cuts were unlikely, at a point in time when some investors had feared that an already-slowing domestic economy, escalating U.S.-China trade war and an easing Federal Reserve (Fed) would all help to augur a cycle of cuts. That helped lift and then support South African bond yields, although the currency has since depreciated as the global economy soured and fears to South Africa's credit rating rose.

President Cyril Ramaphosa and his government are working against the clock to put South Africa's public finances on a sustainable footing but doing this to the extent necessary to satisfy Moody's is a tall order and a task at which the government has so-far failed. Over-indebted and sometimes insolvent state-owned-enterprises are among the biggest burdens, although a weak economy and legacy of 'state capture' corruption are also factors. 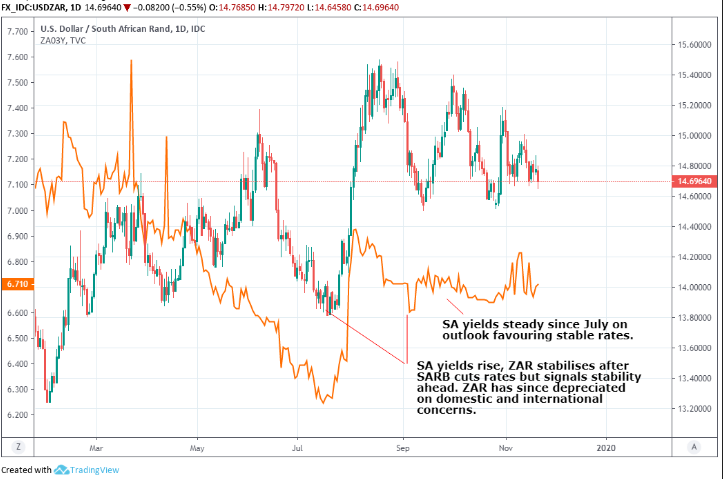 "The performance of USDZAR will continue to depend on both external and domestic (especially political) variables. With the [budget] revision in October 2019, however, the range of possible permutations has narrowed substantially. Our base case scenario is a full downgrade to junk of South Africa, and USDZAR peaking at around 16.50 in H2 2020," Maggio says.

Moody's says lower projected-budget deficits - which require either more tax revenues or less planned expenditure - are the price of its confidence that South Africa's debt is on a sustainable trajectory. And without said confidence, a rating downgrade from 'investment grade' to 'junk' is just a matter of time and would risk forcing some investors out of the country That would be bad for the Rand.

The outlook on South Africa's rating was cut to negative this month, meaning a downgrade to 'junk' could follow as soon as February 2020, after the government's latest budget statement unveiled significant increases in projected deficits and that a huge rise in public debt-to-gdp is anticipated for the coming years. South Africa's deficit is now expected to top 6% of GDP over the forecast period and the debt-to-gdp ratio is seen rising above 70%. 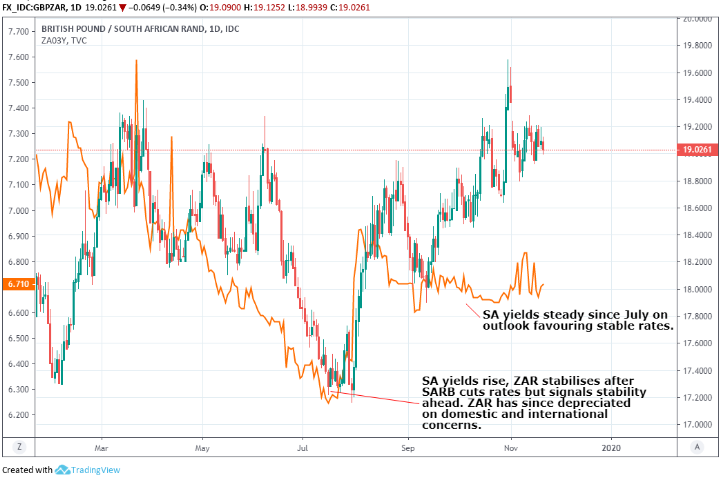 "EM currencies that are linked to the stronger EUR performance should do well," says Hans Redeker, head of FX strategy at Morgan Stanley. "We expect South Africa to decouple to some extent from the global story due to its weak domestic outlook, and so we see ZAR weakening throughout 2020."

Concerns about the credit rating and South African economic outlook are exactly why U.S. banking behemoth Morgan Stanley tips the Rand to decline throughout 2020 even as other emerging market currencies ride the coattails of a rising Euro, which is forecast to have reached 1.16 against the Dollar by the time next year draws to a close. The USD/ZAR rate is forecast to end next year all the way up at 16.0 while the Pound-to-Rand rate is seen ending 2020 at 21.60.

"There still isn't a concrete plan about the future of Eskom. We believe that the market expects Moody's to downgrade the rating on South Africa to sub-investment grade at some point in 2020, which is reflected in bonds but not FX," says Redeker, who's advocated that Morgan Stanley's clients sell the Rand and buy the Russian Rouble as a 'Top Trade' for 2020. "Given the macro outlook and expectations of a downgrade, we believe that ZAR is not pricing in enough risk premia on an absolute basis and relative to bonds."