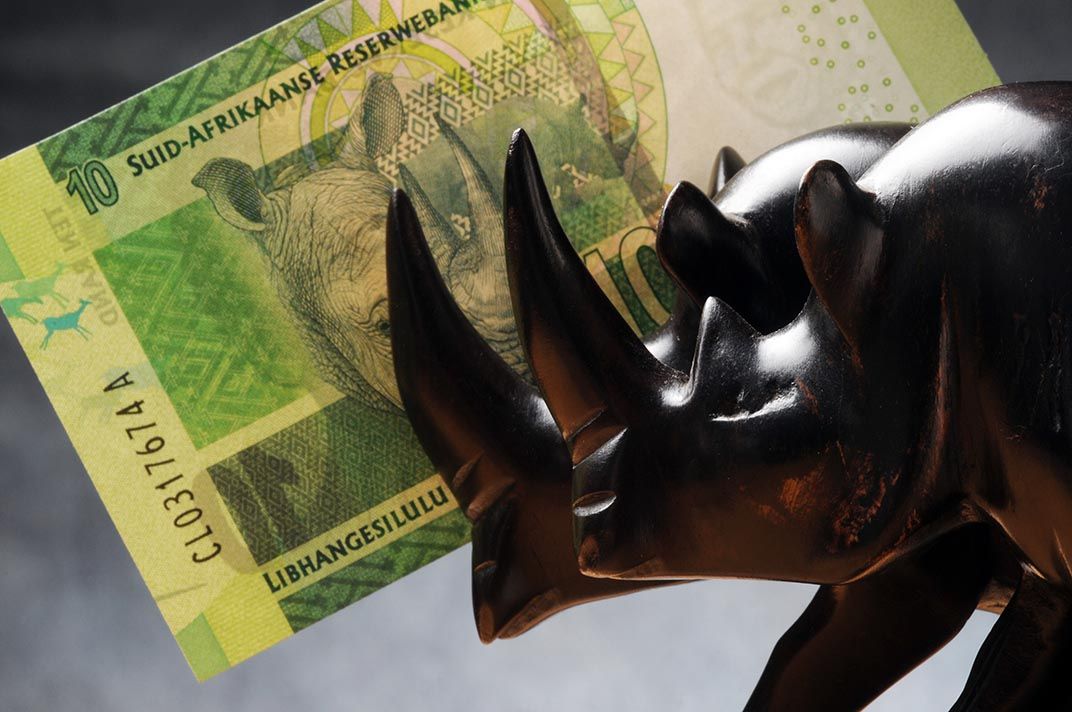 The 4-hour chart - we use the 4 hour chart for the short-term outlook which includes the coming week - shows how the pair has reversed after peaking at the 19.27 June 7 highs. It has fallen quite sharply since the reversal at the highs and because of this we see more downside on the horizon. 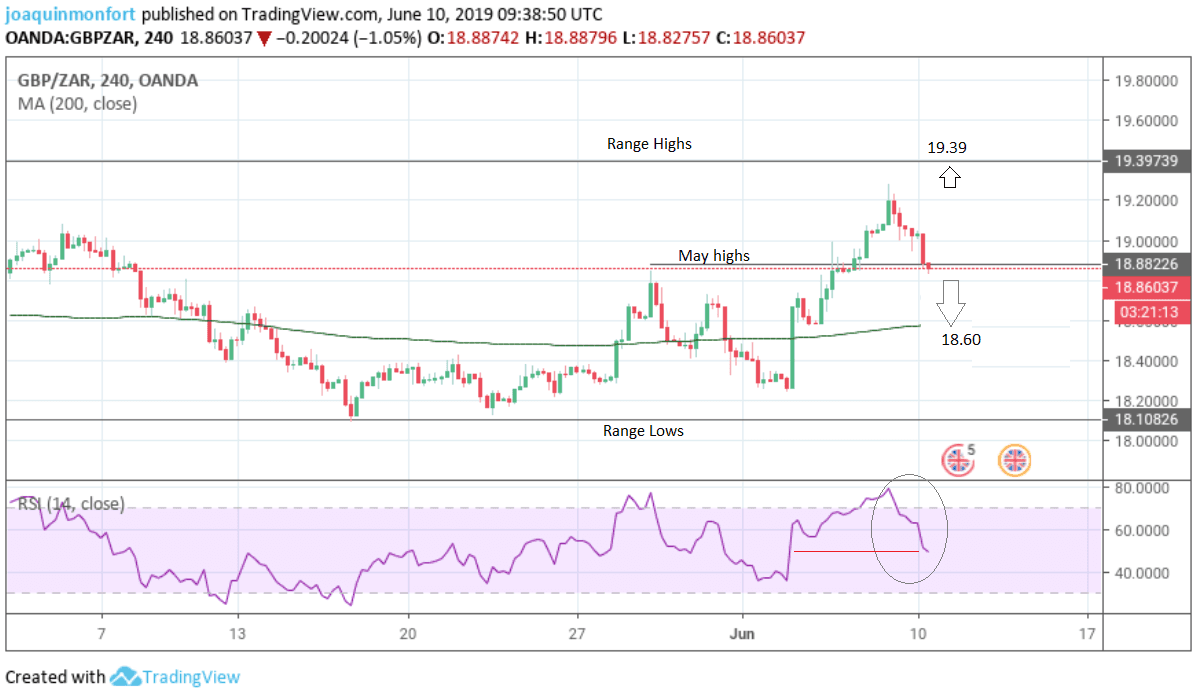 Subject to confirmation from a break (on a closing basis) below the May highs at 18.84 the new downtrend could continue lower to the next target at 18.60.

The RSI momentum indicator in the lower pane corroborates the bearish outlook. It has fallen to the same level (red line) as when the exchange rate was trading down at 18.40. This suggests bearish sentiment is strong.

The other alternative is that support from the May highs holds and the exchange rate recovers. If it breaks above the 18.27 highs it should extend up to a target at 19.39.

The daily chart shows the pair trapped in a range with highs at 19.30 and lows at 18.10. It has just reversed after rising up quite strongly but there is no clear direction in the medium-term unless the pair can break out of the range. 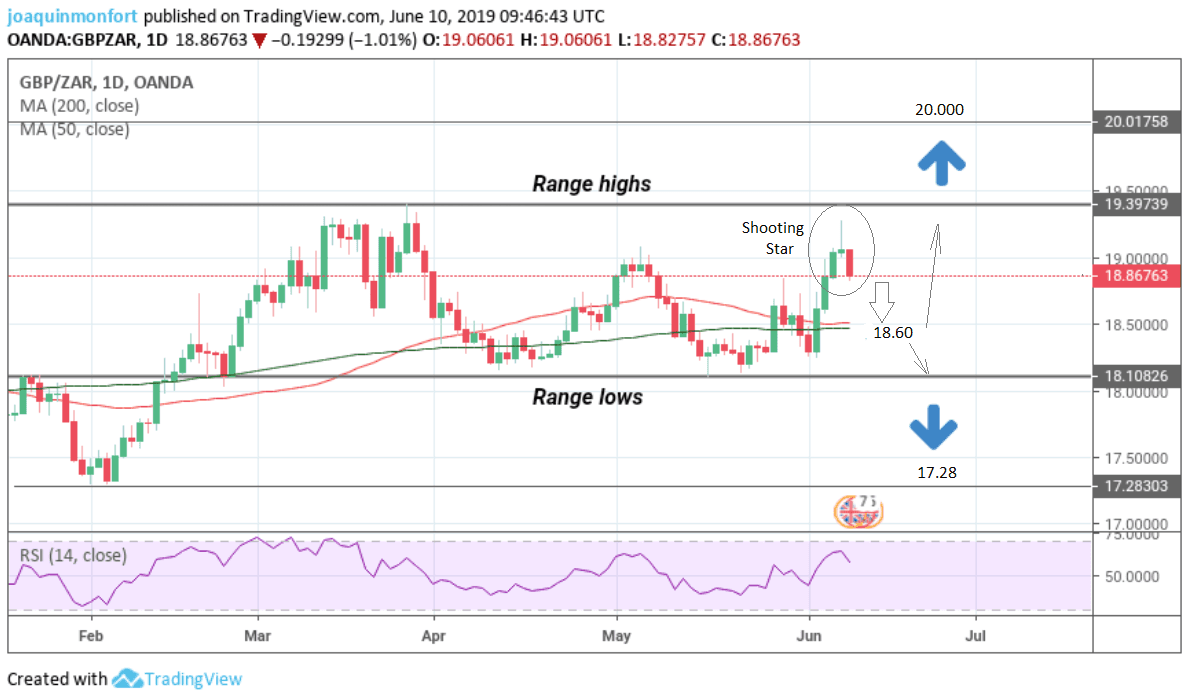 We use the daily chart to analyse the medium-term trend, and the next 1-4 weeks price action,

GBP/ZAR has formed a shooting star candlestick reversal pattern on June 7 (circled) and started falling. The strong down day today (Monday) right after the shooting star is a bearish confirmatory signal.

The pair is likely to fall to support at 18.60, as already stated, at which point it will encounter quite tough support from both the 50 and 200-week moving averages (MA).

Beyond that, it is difficult to forecast in which direction the pair will move and only a clear break above or below the range would provide the basis for a directional call.

A break above the 19.39 range high would signal that the pair had broken out to the upside and is likely to continue rising to the next target at 20.00.

On the other hand, a break below the 18.10 floor would provide a bearish signal of more downside to come, to a target at 17.28.

The weekly chart shows the pair have broadly undertaken a random sideways walk over the last couple of years. 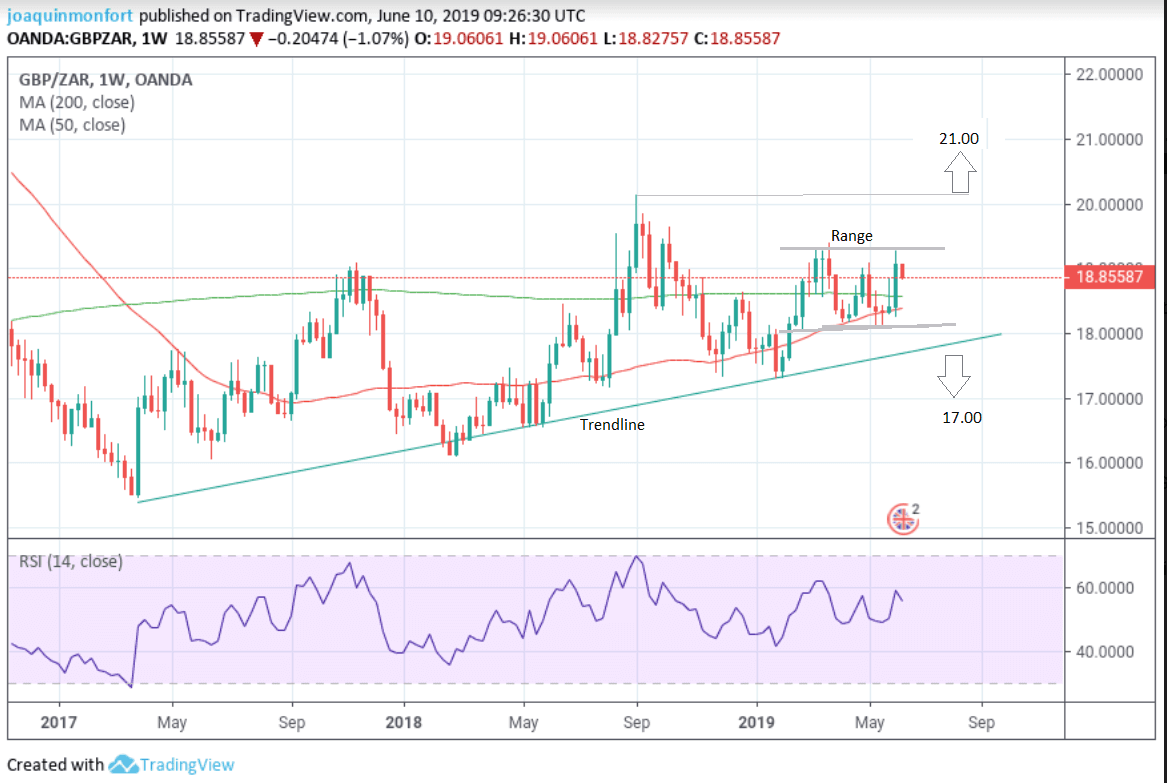 As stated above, the outlook depends on the direction in which the pair breaks out of the medium-term range.

If it breaks lower, it is likely to pierce the major multi-year trendline lying beneath and continue down to a target at 17.00.

The Rand remains subject to soft sentiment owing to domestic political developments and an underperforming domestic economy, two drivers that are unlikely to disappear anytime soon and should keep the currency under broad pressure over coming weeks.

Last week S&P Global Ratings downgraded the credit rating for South Africa’s state-run power utility Eskom to CCC+ from B-, citing liquidity concerns and insufficient government support that left it at risk of a default.

“Eskom remains at risk of facing a distressed exchange situation or default in the next six months despite securing 30 billion rand ($2.6 billion) in short-term funding from local and international funders so far this year,” S&P said in a statement. “We now believe there is a lower likelihood that Eskom would receive extraordinary support from the government, reflecting our view that government support for the utility over the past few months has been insufficient given that the utility’s liquidity concerns persist,”

The sheer scale of the Eskom crisis continues to weigh on both South Africa's economic capacity as well as the SA government's finances.

"Weekly FX statistics tell of a currency battered by political uncertainties and sustained economic weakness – fears unlikely to be dispelled in the near-term, especially as National Treasury sees no other option but to increase financial support to the embattled Eskom," says Nema Ramkhelawan-Bhana, an analyst with RMB.

Global factors are also likely to work on the Rand over coming days, with the soft performance of the U.S. Dollar potentially opening the door to some relief for the Rand.

South Africa and other developing market economies tend to benefit from Dollar depreciation as it lowers the cost of servicing USD-denominated debt taken on by these countries while lowering the cost of imports.

For South Africa, a weaker Dollar lowers the cost of fuel imports which offers stimulus to the economy.

The U.S. Dollar has struggled this June and the general trend for the Dollar near-term is down due to increasing expectations that the Federal Reserve will cut interest rates up to twice in 2019, with a rate cut come as early as July.

Expectations for interest rate cuts firmed on Friday following the release of soft U.S. labour market data which showed a relatively low gain of just 75k jobs in May. The long-term average is nearer to 200k.

Fed chairman Jerome Powell said he would use all the means at his disposal to keep growth on track, infer he would cut interest rates to stimulate the economy if necessary.

A cut in interest rates would be negative for the Dollar because it would reduce foreign capital inflows by making the U.S. a less attractive destination for foreign investors to park their money.

Due to the negative correlation, however, the worse things get for the U.S. Dollar the better it is for the Rand.