The Pound-to-South African Rand rate is trading at 18.78 at the time of writing, having overturned an earlier deficit that saw it trade as low as 18.60.

A warning for readers watching Sterling this week: volatility, the kind we have already seen today, is likely to be elevated owing to a fluid Brexit story that will likely include last-ditch Brexit negotiations on Monday and Tuesday ahead of a series of major votes due later this week. Indeed, a recent spike in Sterling is being attributed to talk of a last-ditch Juncker-May meeting in Strasbourg later today, details can be found here.

While volatility will be high, the value of technical levels will still be important as it is at these levels that moves can fade, and even reverse.

From a technical perspective, the outlook is mixed because although the pair is in an established uptrend there are also multiple bearish signs on charts, suggesting the short-term trend may be in the process of turning.

These signs are not yet enough to confirm a new downtrend, however, so the established uptrend continues to have priority. 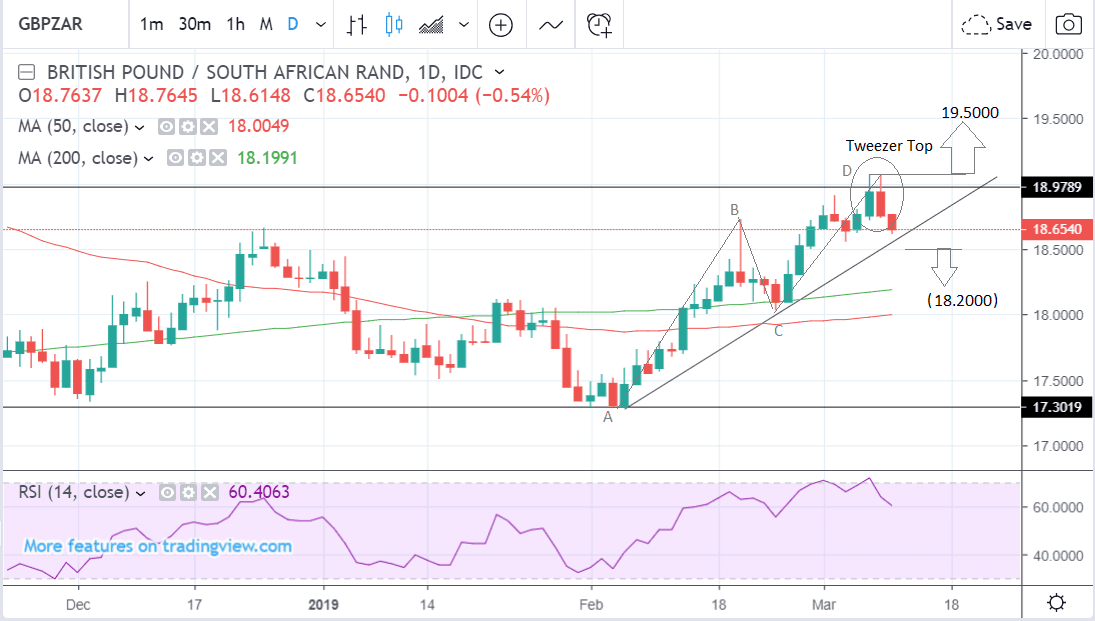 The most recent rally higher, which began at the start of February, peaked last week after touching a resistance ceiling at the 19.08 highs. It then formed a tweezer top, rotated and began declining. The up-trendline remains intact, however, and it's still too early to say with this marks a major turning point. Certainly, the ‘tweezer top’ candlestick pattern points to that but alone is not enough.

The structure of the rally from the early February lows is another sign the uptrend could be about reverse as it has risen in a three-wave zig-zag pattern called an ‘abcd’ or Gartley pattern, which now looks finished. Legs a-b and c-d of these patterns are normally of a similar length which happens to be the case with this pattern and therefore indicates it is probably complete and probably ready to decline.

Also, the RSI momentum indicator has just emerged from the overbought zone and is declining, and this is a sell signal.

Because the uptrend remains intact there is still a risk of a continuation higher but the exchange rate would have to break clearly above the 19.08 highs for confirmation. Such a break would probably lead to a continuation to an upside target at 19.50.

The Rand: What to Watch

The backdrop to Rand fundamentals is one of steadily worsening risk sentiment due to a slowing global growth picture.

"Cue EM weakness as investors turned away from risk assets causing equities and currencies to splutter," says Nema Ramkhelawan-Bhana, analyst for Rand Merchant Bank. "The Rand fared no better than its EM peers, conceding to US dollar strength, but much of the price action was driven by global developments rather than an upward repricing of domestic risk."

This has helped propel a rise in the U.S. Dollar because of its safe-haven credentials. This has, in turn, weighed on the Rand because the two are negatively correlated. The close relationship between the two currencies is on account of the high amount of U.S. Dollar-denominated debt in South Africa, which ends up costing more to service, the stronger the Dollar becomes. Furthermore, South African industry relies heavily on imports, particularly fuel, therefore a stronger dollar is considered negative from an economic perspective.

"Let’s be clear, there are still local risks at play, not least Moody’s sovereign ratings review at the end of the month and continued angst over the extent and impact of rotational load shedding, but short-term trading momentum will largely be driven by global happenings including any developments in the US-Sino trade negotiations, at least this week,' says Ramkhelawan-Bhana.

Looking at the domestic docket, data for mining, manufacturing, and confidence in 1Q19 will fall under the spotlight over coming days.

Manufacturing production is forecast to fall by -0.5% in January compared to the previous month when it rose by 0.7%.

“What’s on SA’s dance card this week? Mining, manufacturing and confidence data for 1Q19 will come under the spotlight over coming days but expect to be underwhelmed as higher electricity tariffs and subdued domestic and export demand drag on activity across the sectors. This is unlikely to help the rand’s cause, with worse-than-expected data outcomes likely to exacerbate any weakness,” says Ramkhelawan-Bhana.

The Rand may also be susceptible to political machinations. Ongoing investigations into the state-owned utility company Eskom which has been experiencing financial difficulties as well as potential wrongdoings at the National Prosecuting Authority risk causing political scandals during the run-up to the next election on May 8.

“Voters have taken a hard line on corruption, which has slowly unraveled SA’s social fabric and are likely be unforgiving of parties that support individuals implicated in graft,” says Nema Ramkhelawan-Bhana. “While these events might seem inconsequential to financial markets, they do have a bearing on investor confidence, which as we know is fickle at the best of times.”