- GBP/ZAR in a range which is likely to extend

The Pound-to-South African Rand exchange rate continues to trade within a confined range between 19.00 and 18.50 at the start of the new trading week. 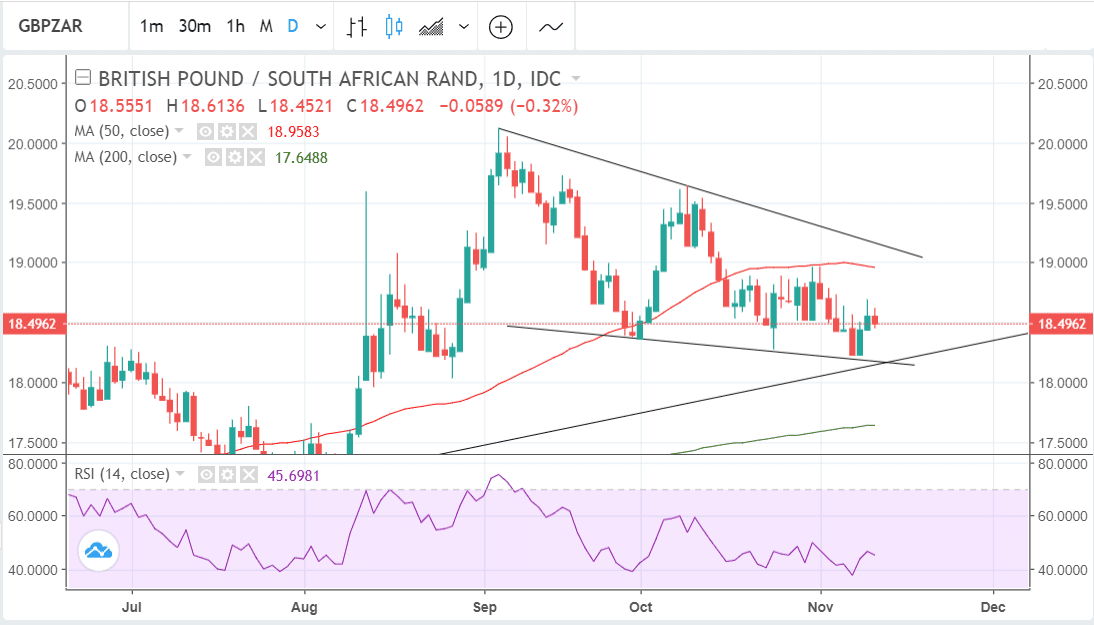 Last week saw little overall change in the exchange rate, for although the Rand strengthened following the US mid-terms because of its sensitivity to the US Dollar which fell, the effect was short-lived.

As we start the new trading week the pair is declining as a result of weakness for the Pound due to a worsening outlook for Brexit talks following the EU's rejection of Theresa May's latest backstop proposal.

From a technical perspective, the existing sideways range will probably extend in the short term, and only a strong breakout in either direction is likely to lead to the onset of strong trending behaviour.

Whilst the pair may be falling within the range at the moment, the longer-term signals are more bullish. Last week GBP/ZAR formed a bullish long-legged doji candlestick pattern on the weekly chart at the level of the 200-week moving average (MA), and this is a bullish signal which indicates more upside within the range is forecast. 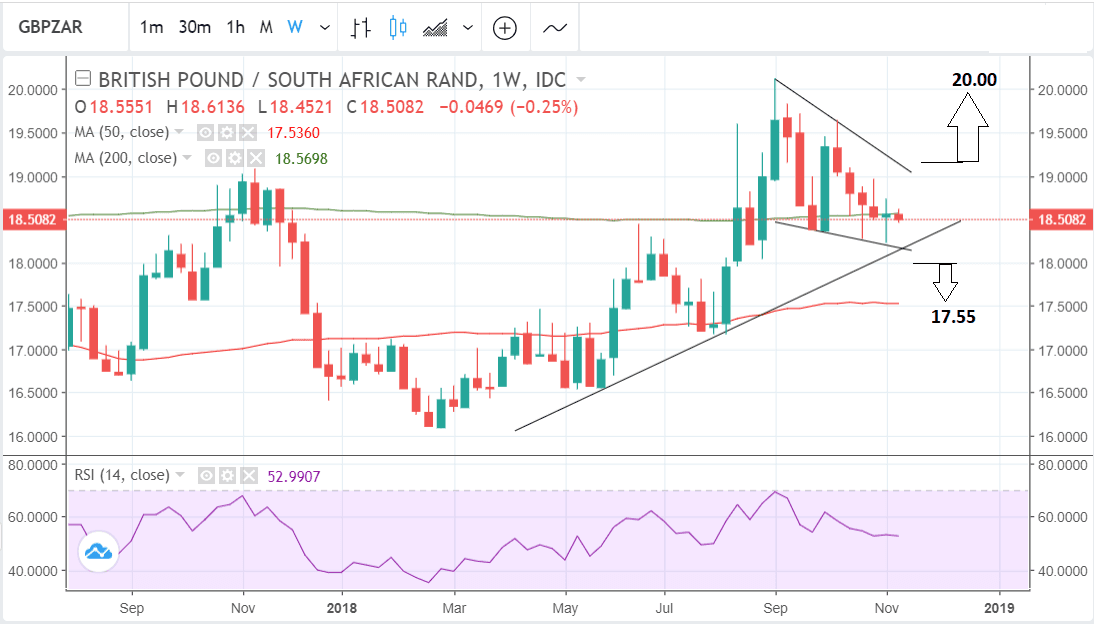 It would take a clear break below the range lows and the trendline drawn from the February lows to give the green-light to a trend change lower, to a target just above the 50-week MA at 17.55.

For confirmation of an upside break, we would ideally wish to see a break above the 19.15 level, with an upside target at the major round-number of 20.00, which because it is a major price landmark is likely to attract increased volumes of buying and selling.

AdvertisementBank-beating GBP/ZAR exchange rates: Get up to 5% more foreign exchange by using a specialist provider to get closer to the real market rate and avoid the gaping spreads charged by your bank when providing currency. Learn more her

The main release for the Rand in the week ahead is retail sales, out on Wednesday at 11.00 GMT, which is forecast to show a 2.2% rise year-on-year in September from 2.5% previously. The Bloomberg consensus estimate, however, is lower at 1.9%.

"Growth in retail sales will likely be limited by increases in domestic fuel prices, the weaker rand, elevated oil prices in September, increased taxes, and labour market uncertainty. Nonetheless, we keep an eye on the data for clues around Q3:18 GDP; we do not expect a contraction," says Zaakirah Ismail, FIC strategist at Standard Bank.

The Rand is likely to be impacted by macro factors considering its sensitivity to the US Dollar to which it is inversely correlated. One such factor is the fact the US Dollar appears to be gaining support due to heightened Brexit and Italy risks, and these may worsen in the week ahead before they get better; if they get better.

The Rand could also weaken if the US Dollar gains from an increasingly hawkish Federal Reserve outlook for interest rates, and with two speeches from Jerome Powell in the week ahead, this remains a risk factor.

The US economy appears to be growing strongly - some say overheating - and this is more likely to lead to the adoption of a more aggressive policy stance from the Fed, than a less aggressive stance.

Finally, the Dollar could also rise if trade tensions ratchet up between the US and China. The US is still planning to increase tariffs on the 200bn of goods it already charges from China, with an increase from the current 10% to 25% envisaged in the new year.

AdvertisementBank-beating GBP/ZAR exchange rates: Get up to 5% more foreign exchange by using a specialist provider to get closer to the real market rate and avoid the gaping spreads charged by your bank when providing currency. Learn more her