The Pound-to-Yen exchange rate broke beneath the lower bound of a bearish wedge formation on the charts last week, suggesting that losses will continue during coming days.

Prices have been in a long-term downtrend that biases the rate to further downside for some time now, although a bearish wedge formation has been particular apparent on the charts ever since the exchange rate hit a peak of 156 in January. 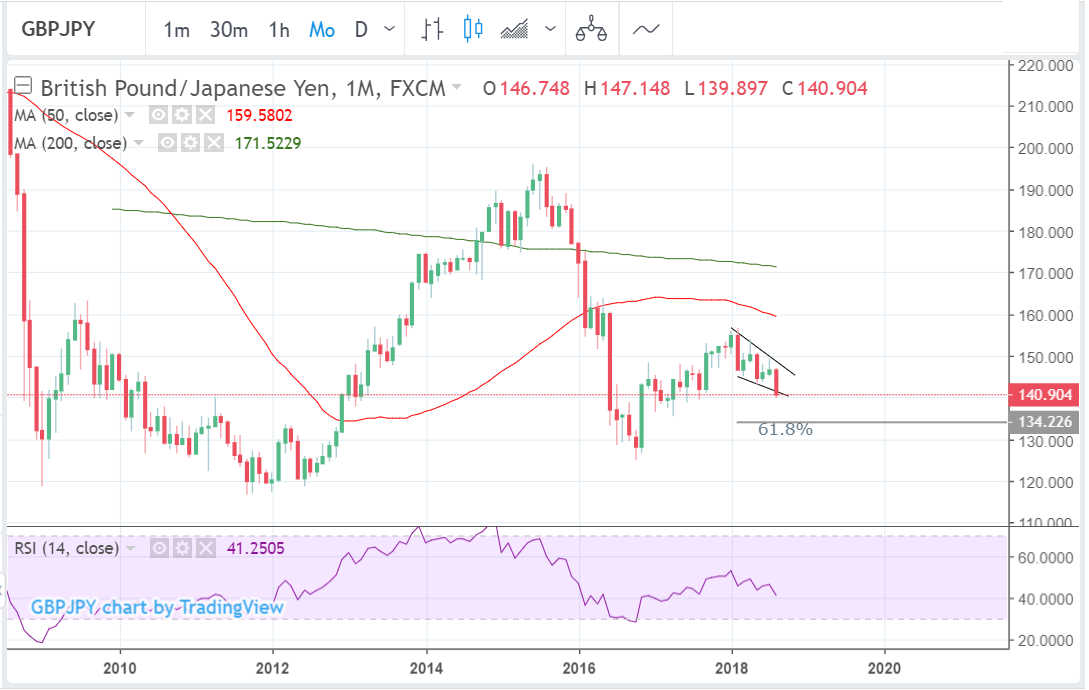 The weekly chart shows the exchange rate has broken below the lower line of the descending wedge pattern, which has now opened the door to a continued long-term decline toward the 124 lows of 2016. 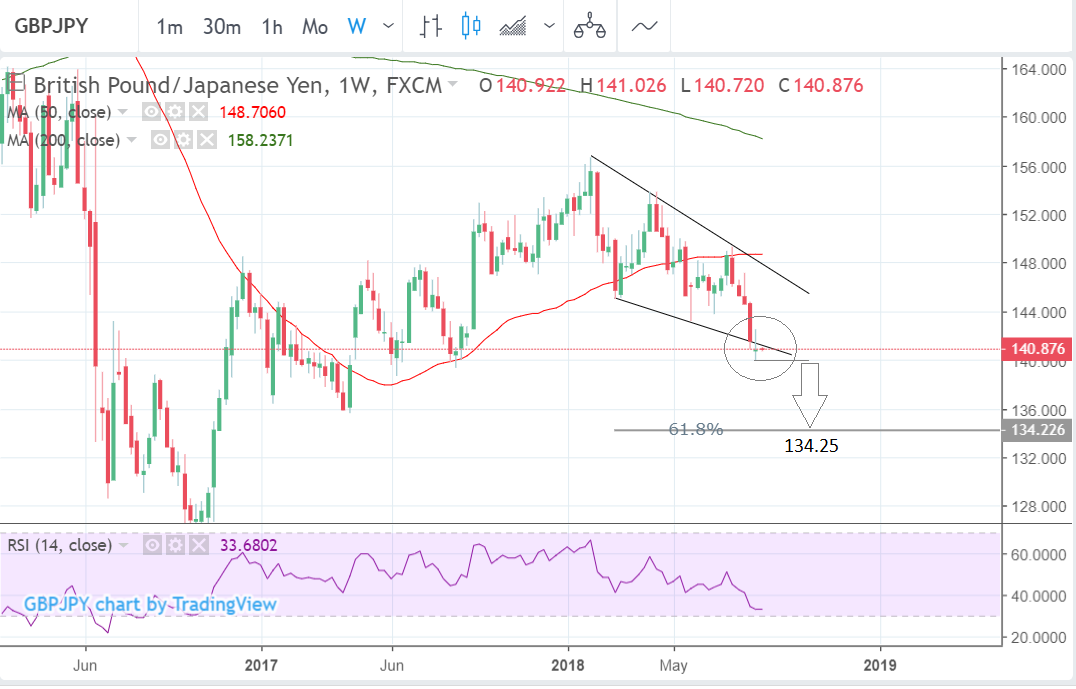 This is a very bearish sign that indicates a probable continuation lower toward a target in the 134 region. For this target we take the height of the wedge and extrapolate it lower by a ratio of 0.618, or the 'golden ratio', a mathematical constant that tends to govern proportionality in natural phenomena as well as in financial markets.

The daily chart shows momentum as measured by the Relative Strength Index (RSI) is now overstretched on the downside and, although this doesn't necessarily mean the pair can't fall any further, it does advocate a little caution could be wise in the short-term. 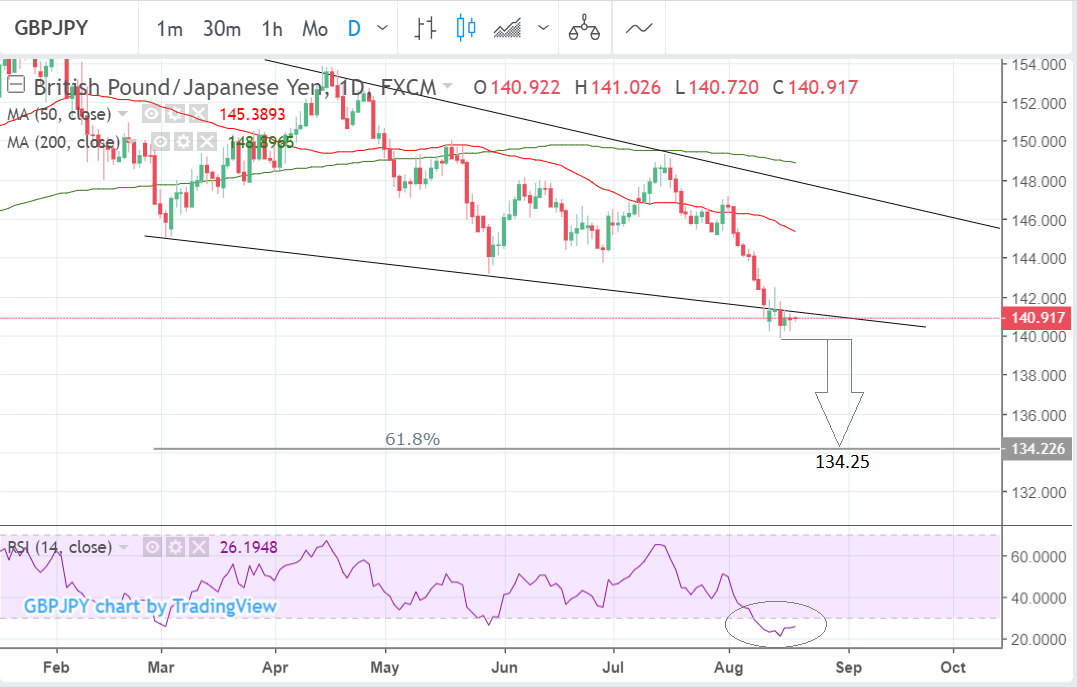 Nevertheless, we would view a break below the 139.90 level as confirming a bearish continuation, with our target at 134.25 based on the height of the descending wedge.

The main event for the Pound in the week ahead will be testimony from Bank of England (BOE) governor Mark Carney the Parliamentary Treasury Select Committee, on Wednesday, August 22, covering the inflation and economic outlook.

Although the BOE raised interest rates at the start of August, the chances of a further hike in the short term are generally viewed as low mainly given the increasing uncertainty around Brexit. Carney recently said the chances of a 'no-deal' Brexit were "uncomfortably high" and that this presents a risk to the economy.

The Pound is highly correlated with interest rates because of their influence over foreign capital inflows. Higher rates tend to attract greater inflows of capital, which raises demand for Sterling. Therefore, traders will be analysing Carney's statements for clues on when rates might change again, even if more clarity is unlikely.

The other major release for the Pound is the Confederation of British Industry (CBI) Industrial Trends report for August, with overall activity balance forecast to decline from 11.0 to 10.0 when the report is released on Tuesday, August 21 at 11.00 B.S.T.

CBI surveys are often closely followed by the market due to their timeliness and can provide early insight into activity within the economy.

The main release for the Yen in the week ahead is inflation data for July. Consensus is for a 0.4% annualised rise in consumer prices during July, down from 0.7% back in June.

Core inflation, which excludes fresh food items from the goods basket, is forecast to show a 0.9% increase after having risen by 0.8% back in June.

The Yen will be sensitive to inflation data after the Bank of Japan relaxed its control of long-term bond yields at its last meeting.

If inflation rises more than expected then the yield will be able to rise further than it did before, supporting the Yen since investors tend to reward rising interest rates of any kind. Not all see the data providing a boost to the currency however.

"With inflation nowhere near the Bank of Japan’s target of 2% on an annual basis, only a large deviation from analysts’ forecasts may excite market participants, spurring expectations for a change in the Japanese central bank’s ultra-accommodative policies and thus movements in the yen," says a report from actionforex.com.

The Yen is also a safe-haven currency that tends to appreciate in times of crisis so the broader geopolitical and international trade themes playing out over the course of this week may also have an impact on exchange rates.