Pound Sterling has taken a fresh leg lower in the wake of comments from Bank of England Governor Mark Carney.

Speaking on BBC 4, Carney says the chances of a 'no deal' Brexit are "uncomfortably high".

"GBP is trading lower on Carney 'no deal' Brexit scenario it appears," says Neil Jones with Mizuho Bank Ltd. "A hard Brexit is not the BoE's base-case scenario as I understand it, however the 'uncomfortably high' comment in reference to a 'no deal' is pushing GBP lower this morning, no question."

The Pound-to-Euro exchange rate promptly dipped on the comments, with the market registering a fresh daily low at 1.1221. The Pound-to-Dollar exchange rate has hit a low at 1.2982 confirming fresh 2018 lows are on the cards in the near-term. 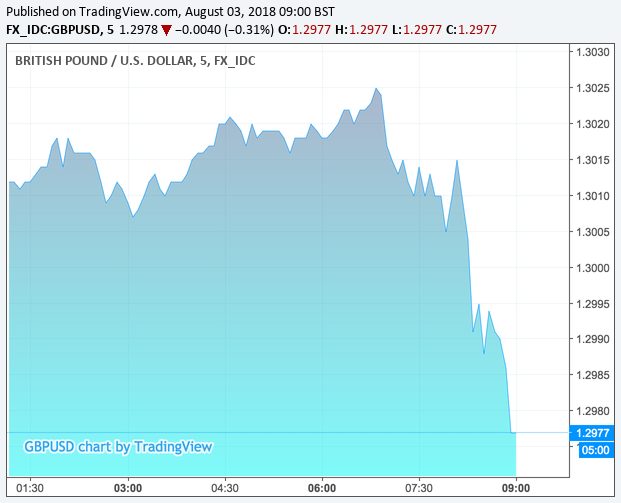 The Pound has endured a tough 24 hours having fallen in the wake of the Bank of England's August policy meeting that saw interest rates rise to 0.75%; a move that would typically support a currency.

However, Sterling's failure to find a bid on the move confirms that there is only one ticket in town when it comes to the Pound - and that is Brexit.

Listening to BOE Governor Mark Carney is like listening to a Churchill wartime speech - He's right to be prudent, but he is phenomenally bearish and BBC'S John Humphrys is lapping it up. I respectfully suggest that Armageddon is not nigh!

Carney also revealed the Bank of England recently ran a Brexit no deal exercise that saw property prices plummet by a third, interest rates go up to 4%, unemployment up to 9%, and a full blown recession

The Governor also refuses to say the 21 month transition period will be long enough to adjust the economy for Brexit, "we’ll take the two years. We’ll make it enough".

The next few months will prove to be laden with risk for Sterling as the EU and UK try to come to a deal that must be agreed on at the October EU Summit.

Failure to reach a deal here will signal to markets that a no deal is in the offing and the Pound will likely finally fall to its 'no deal' resting place.

MUFG believe the Pound is moving closer to a pivot point, with the Pound likely to rebound if a “No Deal” outcome is avoided.