"If inflation does continue to slowly subside going forward, reduced volatility in fixed income markets should be the result. We believe this would be the ideal scenario for the BoJ ending its Yield Curve Control policy," - MUFG

The Yen led other currencies higher in the final session of the week with a continued rally against a retreating Dollar in which the Japanese currency pushed Sterling near to its November low amid declines in U.S. bond yields and emerging speculation about a possible change in Bank of Japan (BoJ) policy.

Japanese interest rates became the lowest in the world when the Swiss National Bank and European Central Bank both lifted theirs above zero earlier this year while the stand-pat stance of the Bank of Japan (BoJ) lef the Yen especially vulnerable to effects of Federal Reserve interest rate policy.

U.S. interest rates reached their highest since before the 2008 financial crisis this year, lifting bond yields and acting as a steroid for the Dollar, which drove USD/JPY higher and pushed the Yen to its lowest for decades.

Earlier losses and this week's slump in U.S. yields may be why the Yen outperformed most of the G20 currencies on Friday and for the week overall.

"The main risk for USD/JPY is that UST 10Y yields fail to find extra support at 3.50%," says Francesco Pesole, an FX strategist at ING. 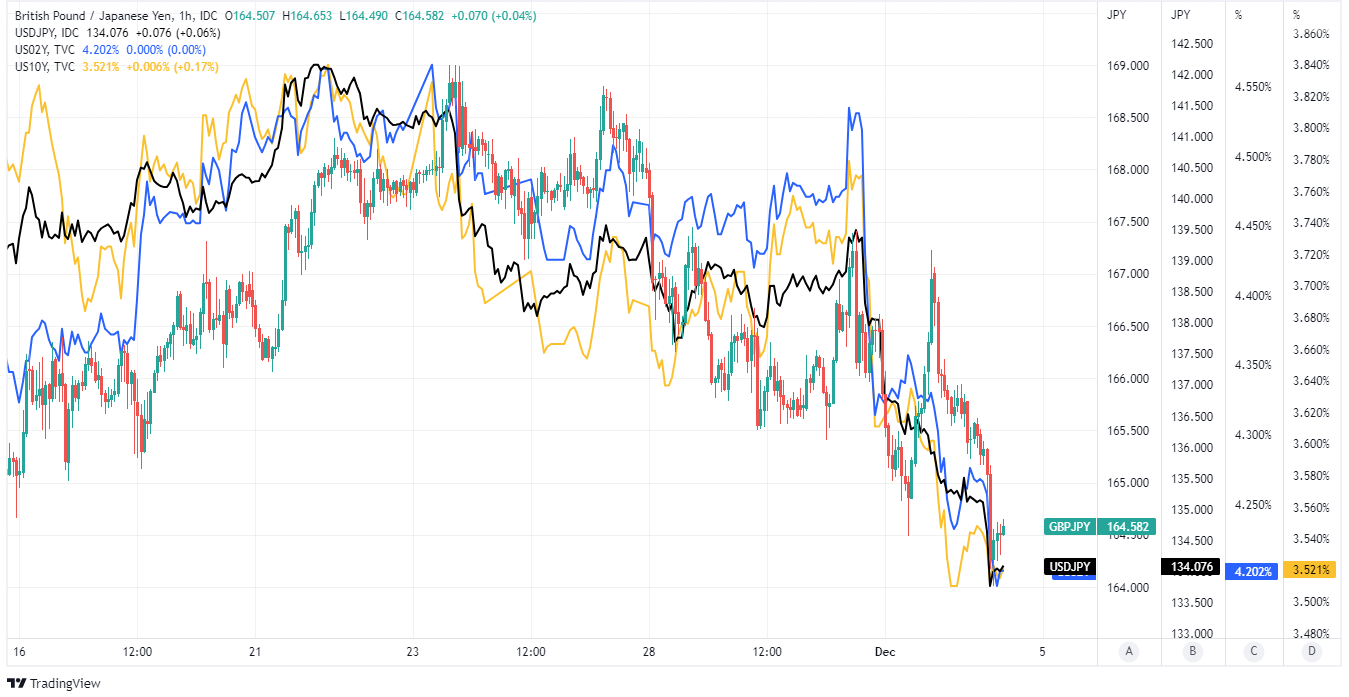 Above: GBP/JPY at hourly intervals with USD/JPY as well as 02-year and 10-year U.S. yields.

"A further bond rally could force a break below the 134.50 200-d MA and unlock additional downside potential for USD/JPY. Still, markets may struggle to live with sub-3.50% rates for long in the current environment," Pesole adds.

The Yen was outpaced on Friday by only the South African Rand, which had fallen heavily on Thursday, and ceded ground to only the Brazilian Real for the week but it's possible there was more than just U.S. yields and the Dollar at work in Japanese exchange rates on Friday.

"Naoki Tamura added fuel to speculation of a policy tweak earlier today by suggesting that it may soon be time to conduct a review of its policy framework. The Bank has often in the past announced major policy changes after such reviews," says Raffi Boyadjian, lead investment analyst at XM.

Naoki Tamura is a member of the BoJ's policy board and said in an interview with Asahi Shimbun on Thursday that the bank's policy of expanding the monetary base in pursuit of its previously-elusive 2% inflation target should be reviewed in the near future.

"The outcome of next year's spring wage negotiations would be key," Reuters reports, later adding that "wage and service prices have barely risen, keeping the BOJ cautious of following in the footsteps of other major central banks."

Distortions in financial markets were the basis on which Naoki Tamura called for the review rather than increases in inflation though a policy change would be more likely if Japanese wage settlements improve next year. 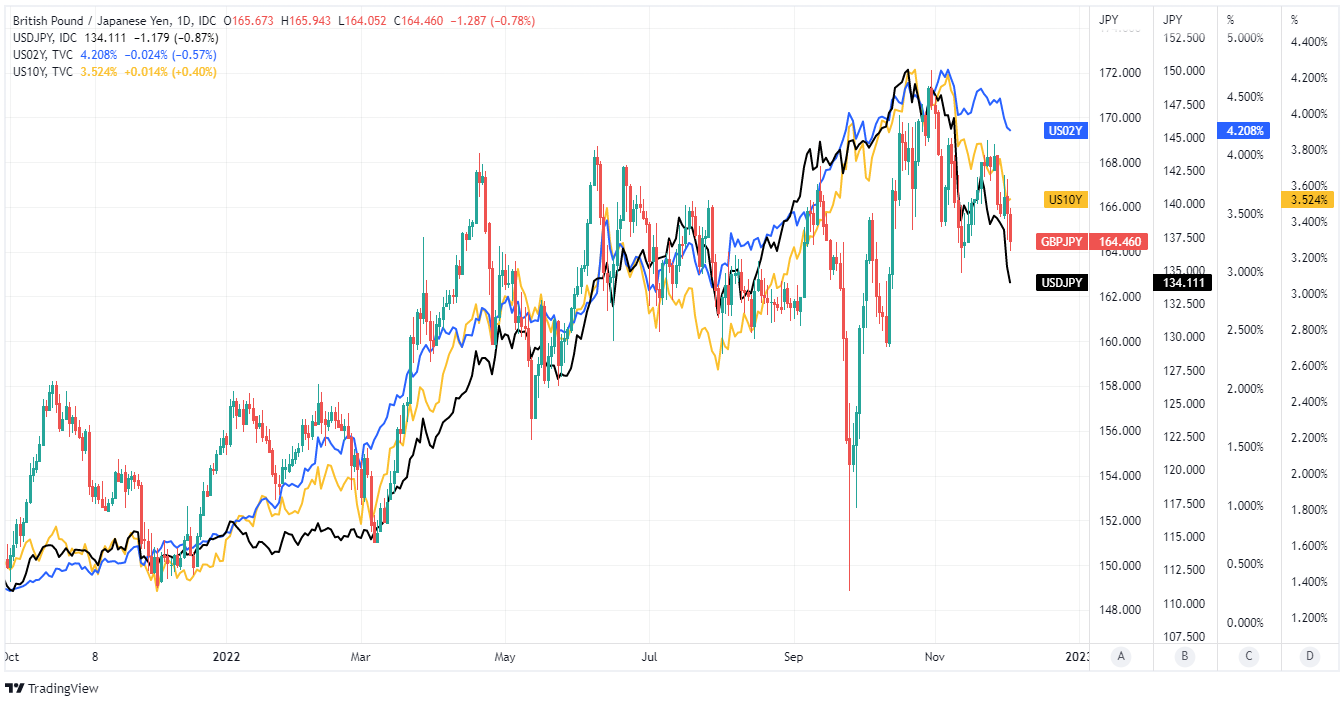 Above:  GBP/JPY at daily intervals with USD/JPY as well as 02-year and 10-year U.S. yields. To optimise the timing of international payments you could consider setting a free FX rate alert here.

Rising wages would potentially prompt the BoJ to revise its inflation forecasts higher and so could necessitate a change in its monetary policy settings.

Whatever the actual catalyst, any eventual change in BoJ policy settings could have an outsized impact on the Yen relative to that seen with other currencies and central banks because of the length of time over which Japan has maintained negative interest rates and relatively low bond yields.

BoJ policy has made the Yen a popular 'funding currency' for traders speculating on other currencies as well as for investors in real economy assets.

Much would likely depend, however, on how far returns from Yen holdings rise and this would itself be determined by the size of any policy change.

"The yen was the 2 nd best performing G10 currency (NZD 1st) in November, advancing versus the US dollar by 7.7%. The percentage drop in USD/JPY was the largest since October 2008," says Derek Halpenny, head of research, global markets EMEA and international securities at MUFG.

"If inflation does continue to slowly subside going forward, reduced volatility in fixed income markets should be the result. We believe this would be the ideal scenario for the BoJ ending its Yield Curve Control policy," Halpenny writes in a Thursday review of MUFG's forecasts. 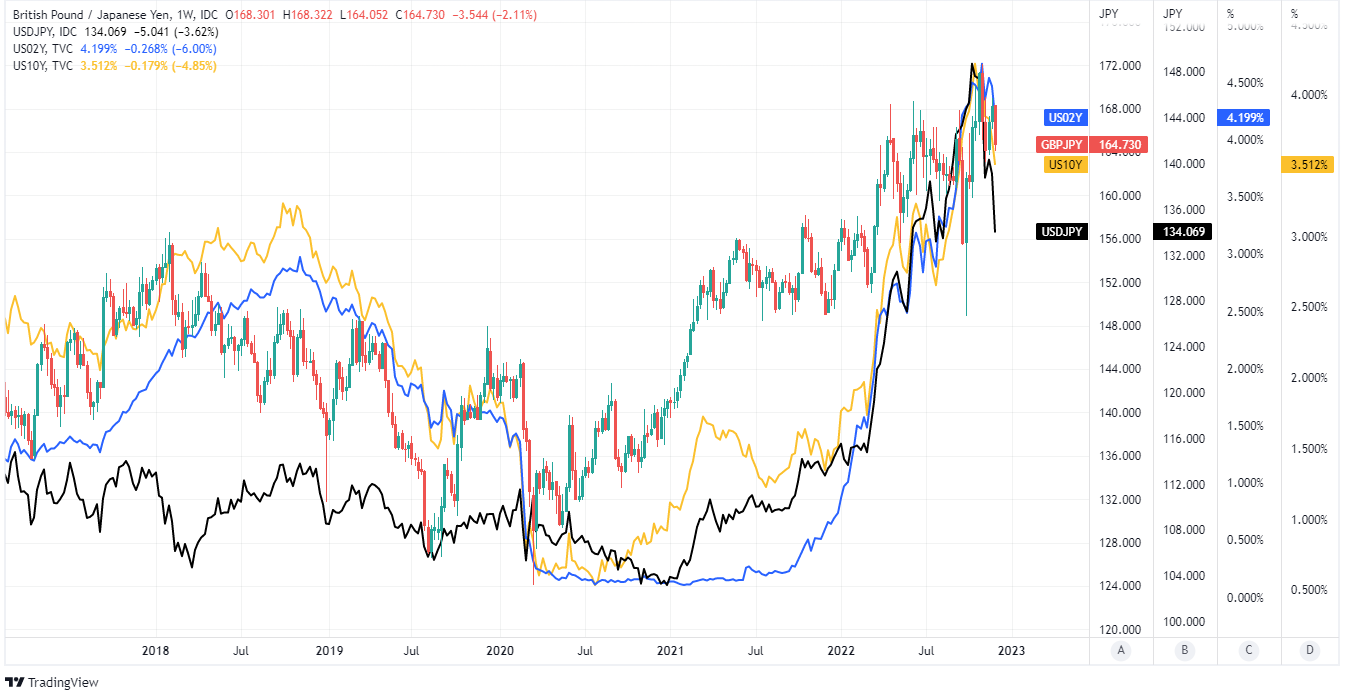 Above:  GBP/JPY shown at weekly intervals alongside USD/JPY as well as 02-year and 10-year U.S. bond yields. Click image for closer inspection. If you are looking to protect or boost your international payment budget you could consider securing today's rate for use in the future, or set an order for your ideal rate when it is achieved, more information can be found here.