The Japanese Yen's annual loss reached extreme levels at times this week, drawing increasingly stern protests from the Ministry of Finance, but there is a danger that market speculators driving this are unwittingly engaging themselves in a game of Russian roulette with lots of loaded chambers in the pistol.

Japan's Yen was an outperformer among major currencies on Friday in a market that saw U.S. Dollar exchange rates falling broadly and risky assets rising almost across the board, although there was little to suggest this price action was anything more than pre-weekend profit-taking.

"We can't point to a catalyst in the overnight news for this abatement of risk-off, but we do think that markets had become so one-way earlier in the week that they were somewhat primed for a 'mood swing' as traders wound down positions for the weekend," says Greg Anderson, global head of FX strategy at BMO Capital Markets.

"Prior to today, verbal intervention (VI) had largely faded over the past few months, so it will probably have some impact on the FX market possibly up through the BoJ meeting on September 22," Anderson said on Friday.

Meanwhile, much market commentary has remained resolutely bearish while the Ministry of Finance has become increasingly attentive to its currency.

"The big round of VI that we saw as USDJPY broke 125 and approached 130 wasn't able to seriously alter market forces, and we still think that's the case. So we still think it makes sense to buy the dips in USDJPY. A 141-handle seems like a really good bargain, if it can be had," BMO's Anderson said on Friday.

Many around the market have argued that the low interest rates and bond yields presided over by the Bank of Japan (BoJ) are reason enough for the depreciation of the Japanese Yen, given rising import prices for energy and hawkish Federal Reserve (Fed) interest rate policy.

However, some Japanese officials say the latest falls in the Yen have gone beyond what could be justified by economic and financial fundamentals while many have become increasingly overt in warning that official intervention to support the currency is becoming increasingly likely.

On Friday BoJ Governor Haruhiko Kuroda reportedly described this week's moves as "very sudden" while on Wednesday Finance Minister Shunichi Suzuki said “the necessary action would be taken if the yen continued to depreciate,” which is important because the Ministry of Finance is the decision-maker when it comes to intervention. 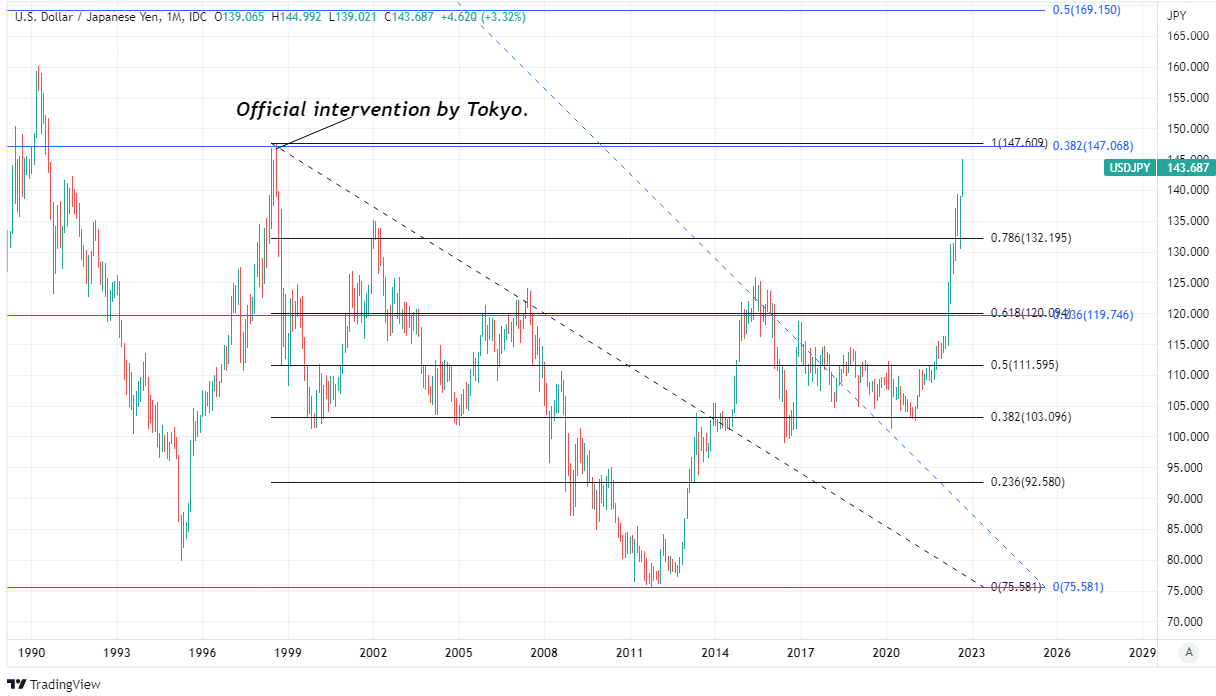 Above: USD/JPY shown at monthly intervals with Fibonacci retracements of 1998 and 1985 falls indicating various areas of long-term technical resistance.

"When the central banks start pushing back against USD strength, it does not always mean you just go short USD and get rich. But it does mean that the long USD trade becomes choppier and more difficult. Long USDJPY or long USDCNH right now and you are fighting a massive battle with government authorities," says Brent Donnelly, president at Spectra Markets and a career currency trader with time spent at hedge funds and a range of global banks including Lehman Brothers and HSBC.

"The thing is these authorities don’t always win. For the JPY pushback to be credible, the BOJ will need to hint at a removal of yield curve control as a remedy for JPY weakness. So far, it’s been the MOF leading the charge on commentary and without the BOJ on board, the commentary is not credible. Currency policy and monetary policy need to be pushing in the same direction or the currency policy is destined to fail," Donnelly said on Thursday.

Japan's Ministry of Finance holds the world's second largest chest of foreign exchange reserves that were valued around $1.29 trillion at the end of August, down $30.96BN from the end of July, but there is a widely held view in and around the market that these may not be enough to prop up the Yen.

However, such assumptions may be overlooking the impact that any FX intervention could have if and when combined with the effect that a hawkish Federal Reserve monetary policy may have on U.S. treasury bonds and other global markets during the months ahead. 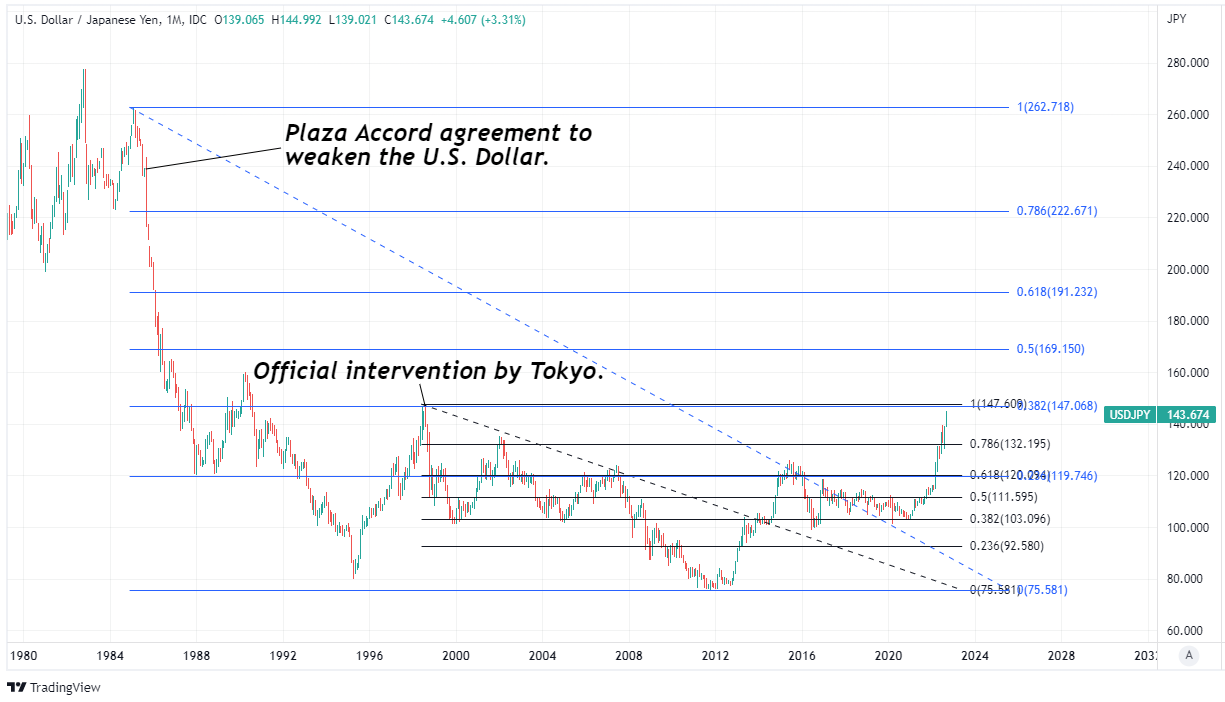 Above: USD/JPY shown at monthly intervals with Fibonacci retracements of 1998 and 1985 falls indicating various areas of long-term technical resistance.

Given their size, much of Japan's FX reserve could only really be held in U.S. treasury bonds and so intervening to support the Yen would involve selling these into a market where bond prices are already falling because of Fed policy.

This could lead U.S. bond yields to rise, and potentially much more than is desirable for the Fed, with adverse implications for all of the many other markets, assets and currencies around the world that are vulnerable to increases in those U.S. yields.

But that could be a risk to speculators betting against the Yen because many of those same markets have also been heavily funded by borrowings denominated in the Japanese Yen, and losses there may have the effect of super-charging the impact of any interventions by the Ministry of Finance.

"The governor pointed out that the across-the-board appreciation of the USD was the main reason for the JPY depreciation, and said that a small rise in interest rates would in itself not be sufficient to stop the JPY decline. He also mentioned that to stop the weakening of the JPY would require hikes in the interest rate big enough to cause significant damage to the economy. We think this is a very accurate view," says Osamu Takashima, head of Tokyo FX at Citi, in reference to July's BoJ press conference.

"Given the current economic and inflation condition in Japan, it is very difficult for the BoJ to tighten monetary policy dramatically. The Bank would have only one opportunity to do so (for instance, a shift to the zero interest rate policy from the current negative interest rate policy). Also, when it comes to JPY-buying intervention by the MoF, major interventions in units of several trillions of JPY would be difficult considering the relationship with the US. It could be no more than a smoothing operation," he added.