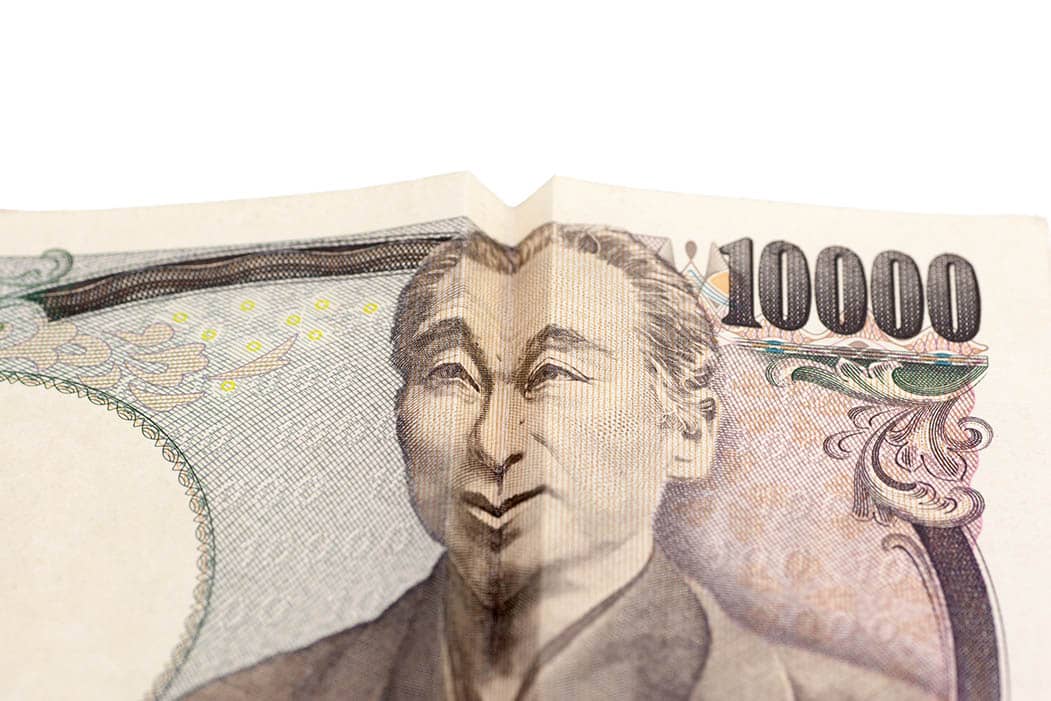 The Yen is in free fall again, reaching its lowest level in 20 years against the U.S. Dollar which has allowed other currencies such as the Pound and Euro to capitalise and push fresh highs.

The Pound to Yen exchange rate reached a high of 167.406 on Tuesday, giving Sterling sellers their best exchange rates since February 2016. 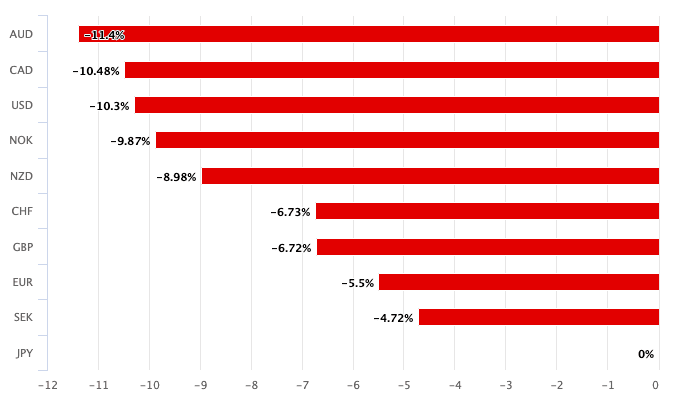 Why is the Yen Falling?

The losses are being driven largely by declines in the headline USD/JPY exchange rate which is now on track to record its 13th successive daily decline.

The Bank of Japan is not anticipated to hike rates in 2022, confirming it holds the largest divergence with the U.S. Federal Reserve in terms of rate hike expectations.

The below chart shows how many rate hikes are expected from then major central banks in 2022: 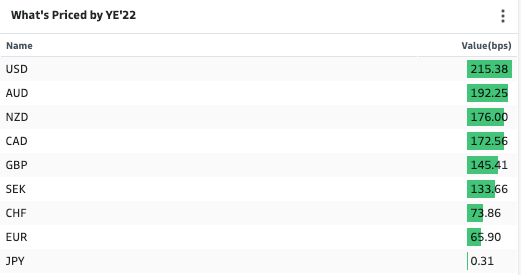 As can be seen, the Bank of Japan sits at the bottom of the pack, the Federal Reserve at the top.

This matters in a world where currencies are highly reactive to rate hike expectations: currencies belonging to hikers have tended to outperform in 2022.

Can the Yen Sell-off Continue?

"There's no doubt at all that the yen's moving too fast," says Juckes.

Juckes is looking at the Relative Strength Index (RSI) on the Dollar-Yen exchange rate for clues.

The RSI is commonly used by analysts to assess whether a financial product is oversold or overbought.

In the case of the USD/JPY - and most other Yen pairs - the RSI is flashing overbought. 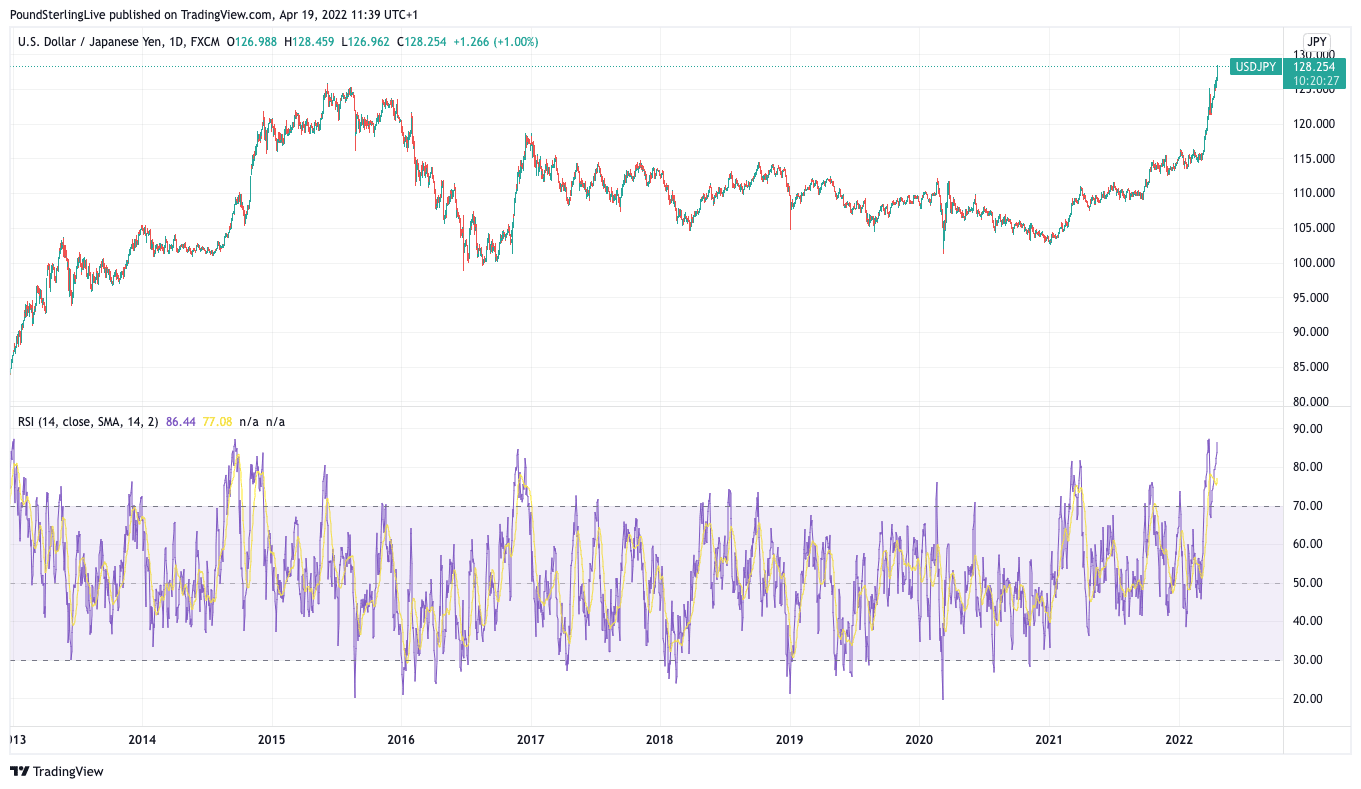 Above: USD/JPY with RSI indicator in the lower panel.

Juckes warns the stretched RSI warns of a potentially sizeable snap back in Yen strength as the market restores some balance.

Whether the Yen sustains further losses will also depend on whether authorities can stomach further declines, says Juckes.

Back then authorities welcomed the declines as it aided Japan's competitiveness in global markets.

But in 2022 Japan faces new problems, notably the surging cost of imported commodities, such as fuel.

Energy importers such as Japan simply won't welcome weaker currencies as they present a severe headwind to economic growth.

Intervention by Japanese authorities is therefore something to watch going forward.

"The weaker yen can help restore competitiveness, but only after a lag. Before then, it will boost import prices and importers will struggle to pass those on. I would favour sticking with weak yen policies and going the distance, but the Finance Minister may blink and if he does, positioning is getting stretched enough to trigger that correction," says Juckes.

Recognising the unwelcome effects of the deterioration, Minister of Finance Shun'ichi Suzuki has hinted at the prospect of a potential coordinated intervention in the market with other countries.

"There is a way out of this mess – and it involves the BoJ widening the tolerance band’ of the 10-year JGB yield target. Otherwise, the JPY will continue to get crushed as long-end UST sells off (meaning US yields higher). For the BoJ, this is exactly the risk of having a yield curve control policy – the volatility in the rates market gets transferred to FX when you won’t let the market reach equilibrium for the 10-year yield," says Bipan Rai, Head of North American FX Strategy at CIBC Capital Markets.

In September 2016 the Bank of Japan introduced a yield curve control policy that sees it control the yield paid on near- and longer-term debt, thereby ensuring the cost of funding within the economy remains stable and at low levels.

But, by actively supressing yields the BoJ is creating the Yen's biggest source of downward pressure.