The Yen weakened Tuesday as investors digested remarks of Chief Cabinet Secretary and incoming Prime Minister Yoshihide Suga, whose imminent ascent Sōri Daijin Kantei is weighing on the Japanese currency due to lingering uncertainty about leadership as well as the fiscal and monetary policy outlook for the world’s third largest economy.

Chief Cabinet Secretary Yoshihide Suga is expected to receive the official nomination for Prime Minister on Wednesday after winning a landslide Liberal Democratic Party mandate to succeed outgoing Prime Minister Shinzo Abe, who announced his resignation due to ill health in late August and triggered a leadership race in the process, and ascend to the Sōri Daijin Kantei thereafter.

Composition of the incoming cabinet has garned a great deal of attention although Suga has already made his fiscal and monetary policy intentions clear with Tuesday remarks saying that his government should "inherit and move forward with" the ‘Abenomics’ that have characterised Japanese economic policy and trading in the currency since early 2013.

“The focus will then be whether Suga is calling a snap election early or not (there has been media report of 25 Oct as the most likely timing of the election, if called by year-end). So 25 Oct (Sun) could be important, but we need to follow opinion polls after the cabinet inauguration and momentum toward the election over the next few weeks,” says Yujiro Goto, head of FX strategy at Nomura. “COVID-19 infections in Japan are worth monitoring as the third wave makes it more difficult for Suga to dissolve the parliament.”

Abe’s resignation stoked uncertainty about whether his ‘Three Arrows’ or 'Abenomics' policy of combining fiscal and monetary stimulus with structural economic reforms would continue. The moniker resulted from his 2012 rise to power, which prompted currency depreciation that lifted the USD/JPY rate from 83 in January 2013 to 105 by the end of that year. 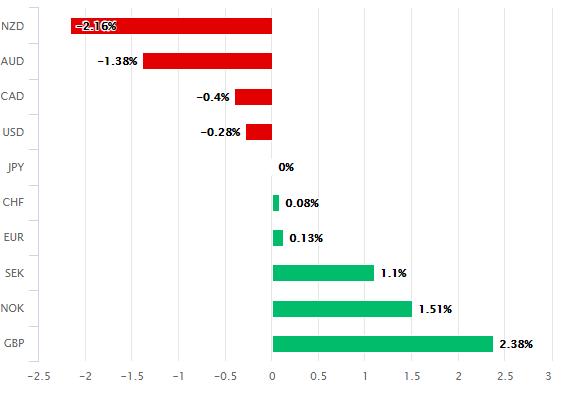 Uncertainty has done little good for the Yen, which was lower against all majors other than the Dollar Tuesday and has fallen against all except the greenback and Pound Sterling in the last week. The Japanese currency has seen only limited gains since first speculation that a change of leadership is likely.

Few in the markets have ever seriously entertained the notion that any incoming Japanese leader would dare attempt a withdrawal of fiscal or monetary stimulus in the middle of a coronavirus pandemic that brought vast swathes of the global economy to a standstill and which still troubles Japan to this day.

The ongoing second wave in Japan was larger than the first and the number of new infections recorded each day in September has flattened out at relatively elevated levels of between 400 and 600.

“Japan's prime minister in-all-but-name, Yoshihide Suga, will be inheriting an economy struggling to maintain any momentum from the release of pent-up demand,” says Freya Beamish, chief Asia Pacific economist at Pantheon Macroeconomics. “The ultra-loose settings of the Bank of Japan—one of the three arrows of Mr. Abe's economic agenda—will remain anchored by Governor Haruhiko Kuroda's term at the Bank's helm, which lasts for another three years.”

Abenomics was designed to put the public finances on a sustainable footing and boost the economy. It was hoped the much-vaunted strategy would end a deflationary stagnation that's haunted Japan since its boom-to-bust decades of the 1970s and 1980s, but at best the results have been mixed. 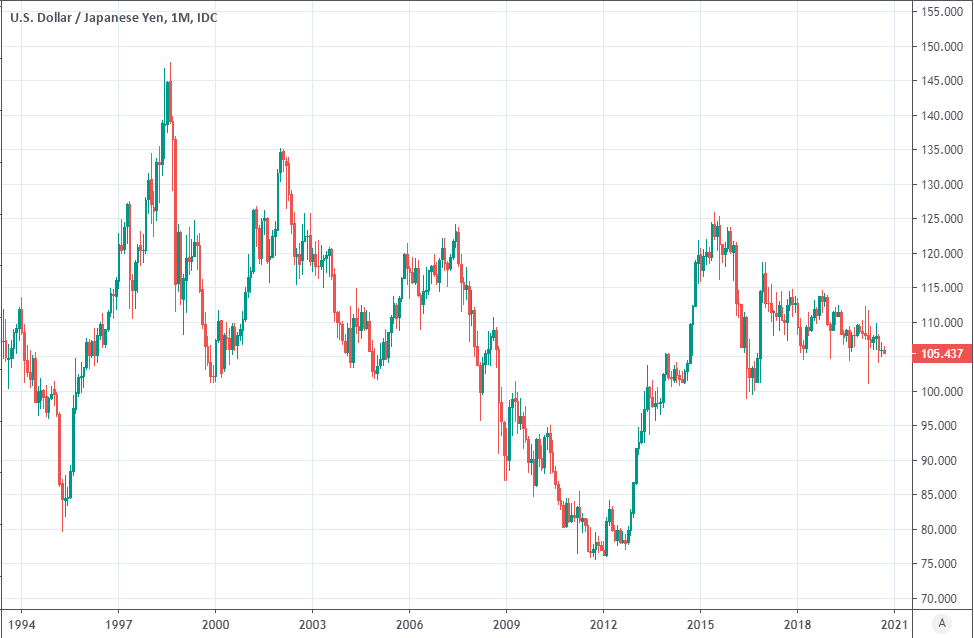 Above: USD/JPY rate shown at monthly intervals. Captures 2013 depreciation of the Yen.

“The cornerstone of Abenomics is essentially the agreement outlined in the joint statement between the BoJ and the government back in 2013 when Governor Kuroda began aggressive monetary easing. Hence, when Governor Kuroda speaks on Thursday following the monetary policy meeting we should expect nothing less than a very strong message that the policy stance of the BoJ would be maintained despite the change in prime minister,” says Derek Halpenny, head of research, global markets EMEA and international securities at MUFG.

Suga will receive the official nomination for the role of Prime Minister this week but leadership uncertainty is expected to live on in election risk, given that Abe’s term was already set to end in an October 2021 election and speculation is that the incoming leader of the world’s third largest economy might want to consolidate or bolster his position through a snap election.

Nomura cites local media for thinking that a snap election could come as soon as next month and the rub for the Japanese currency is that until such a venture is either ruled out or fading into the rearview mirror of history, leadership uncertainty could continue to at least constrain the Yen, with weakness likely best reflected against non-Dollar currencies.

The ongoing softening of the Yen could be bolstered on Thursday this week if Bank of Japan (BoJ) Governor Haruhiko Governor takes the opportunity to either express or demonstrate his and the bank’s ongoing support for the Abenomics agenda. Combining a ‘dovish’ or easing monetary policy stance with leadership uncertainty is enough to make life difficult for any currency.

The BoJ will announce its next policy decision at an unscheduled time in the early hours of London's Thursday morning.

“The primary goal of both a new PM Suga and Governor Kuroda will be stressing continued stability which would help to keep the yen stable. There are many reasons for arguing continuity. The strongest period of nominal GDP growth since the bubble burst; the longest period of positive inflation; the biggest increase in government tax revenues relative to expenditure and a notable increase in female participation in the labour market are key Abenomics successes, " Halpenny says. "COVID has now disrupted these trends but the message will be – stay on track, the policy mix was proving successful.” 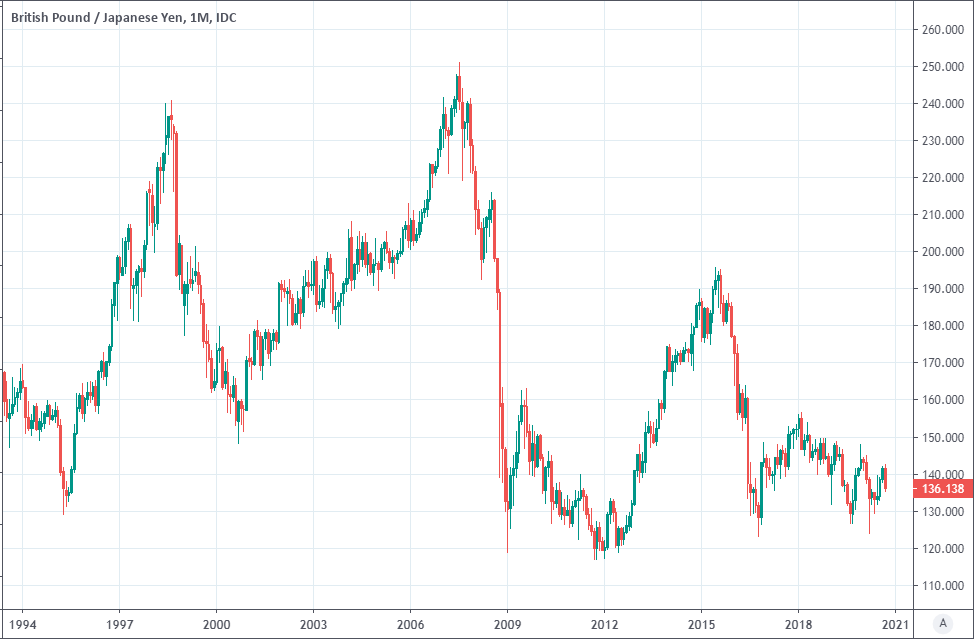 Above: GBP/JPY rate shown at monthly intervals. Captures 2013 depreciation of the Yen.