- Technical considerations said to be behind JPY selloff
- Looming recession diminishes attractiveness of JPY assets
- Bank of Japan has emptied its arsenal, lacks firepower to support

A sharp sell-off in the Japanese Yen looked set to enter a second day amidst an apparent sudden shift in investor perceptions towards the Japanese economy and its currency.

The market unexpectedly triggered a large sell-off in the Japanese currency on Wednesday, February 20 and many market commentators and analysts said the sell-off had all the hallmarks of a technical move. Such technical moves involve large buy and sell orders being automatically triggered at various points in the market and are largely believed to be void of any fundamental underpinning.

In this instance, it is believed sizeable buy and sell orders in the U.S. Dollar-Yen exchange rate prompted the market to pop higher, pushing other currencies up against the Yen in sympathy.

"There are times when the yen trades in line with cyclical macro factors (eg, growth) and correlation between Nikkei and USDJPY is low/negative. But this isn't one of those times. Looks like a good old position clear out. Remember we're also entering fiscal year-end in Japan," says Viraj Patel, a foreign exchange strategist with Arkera. 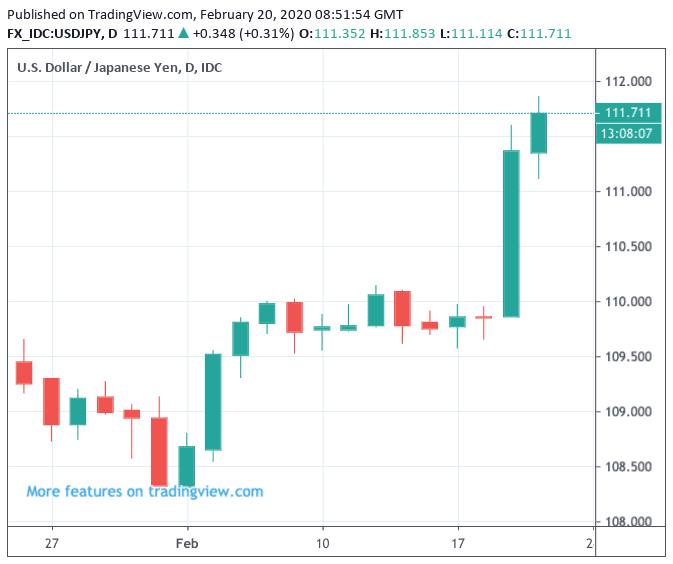 Above: The USD/JPY exchange rate rises as the Yen is sold.

"It is about as straightforward as it gets - a tight range in a very quiet market followed by an explosive move higher through a major resistance level - classic momentum move and the softness in safe haven fixed income later in the day brings a bit of fundamental support as well," says John F Hardy, Head of FX Strategy at Saxo Bank.

We are also hearing from analysts that to lay focus for the move on technical considerations would risk ignoring the substantial fundamental shifts concerning the Japanese economy and its financial system that risk making Japanese assets increasingly unattractive to global and domestic investors.

"The ghost of deflation is once again hovering in Japan. Following the sales tax hike which had already put pressure on the economy during the last quarter, it is now feared that the effects of the corona virus might have caused the second quarter of negative growth," says Thu Lan Nguyen, a strategist at Commerzbank. "That would cause Japan to technically slip into recession."

Japan on Monday reported a sharp 6.3% year-on-year contraction in economic output in the final quarter of 2019, a decline blamed on the imposition of a sales tax hike in October. However, the decline comes just as the Chinese economy suffers a notable slowdown owing to the coronavirus outbreak, leading to expectations that the contagion effect will hit Japanese economic activity too.

"The economic concerns are likely to be the reason why inflation expectations in Japan have been falling since the start of the month and have now gone into negative territory," says Nguyen.

But key to the Japanese Yen's outlook is how authorities in Japan respond to the economic slowdown: do they soften the blow by cutting taxes and increasing spending, or does the Bank of Japan cut interest rates and increase quantitative easing in order to boost the flow of money into the economy?

The problem is the Government of Japan is saddled with one of the largest debt burdens of any economy anywhere in the world with the country's debt-to-GDP ration at 200%, while the Bank of Japan's armoury is now left virtually empty following decades of increasingly novel attempts to stimulate the economy.

Years of interest rate cuts and the purchase of government and corporate bonds appears to have created a situation where fresh measures simply have little impact on the economy: a clear example of the laws of diminishing returns. At what point does the level of a country's interest rate start to have little relevance to businesses and consumers? It could be Japan has passed that point.

"Usually one would expect that the central bank would react to deflation risks of this nature with significant monetary policy easing. That in turn would justify significant currency depreciation. In the case of the Bank of Japan it does seem very questionable though whether it is still willing or even able to implement a more expansionary monetary policy," says Nguyen.

Japan’s central bank currently maintains a basic interest at -0.1%, its target for 10-year bond yields is set at around 0%, and the pace of its asset purchases is kept at ¥80tn ($740bn) a year. Many officials at the central bank believe their remaining policy options, such as deeper negative interest rates, pose a risk to financial stability and could even backfire — undermining inflation rather than driving it closer to the 2% objective they have been struggling to reach for the past six years.

Commerzbank say the BoJ will at best be able to implement symbolic steps but not a significant rate cut or an increase of its bond purchases.

This therefore means that the Japanese economy risks standing at the edge of an economic recession with the Bank of Japan powerless to help, and for investors this is a point of concern when assessing Japanese financial assets and its currency.

"The JPY is no longer immune to Japan's severely poor economic data, probably the primary reason why the currency's safe-haven status is increasingly being called into question. Investors seem to be turning their backs on Japan for the time being, perhaps with good reason," says Marc-André Fongern, Head of Research at MAF Global Forex.