- GBP/JPY is rising within an ascending channel

- Yen to be driven by risk appetite and trade deal news

The Pound-to-Yen exchange rate is trading at around 137.11 at the start of the new week after rising over 4.00% in the previous week. Studies of the charts suggest the pair has probably established a new short-term trend which is biased to extend over the near-term.

The 4 hour chart - used to determine the short-term outlook, which includes the coming week or next 5 days - shows the pair rising in a strong short-term uptrend which started after the positive news about Brexit talks on October 10. 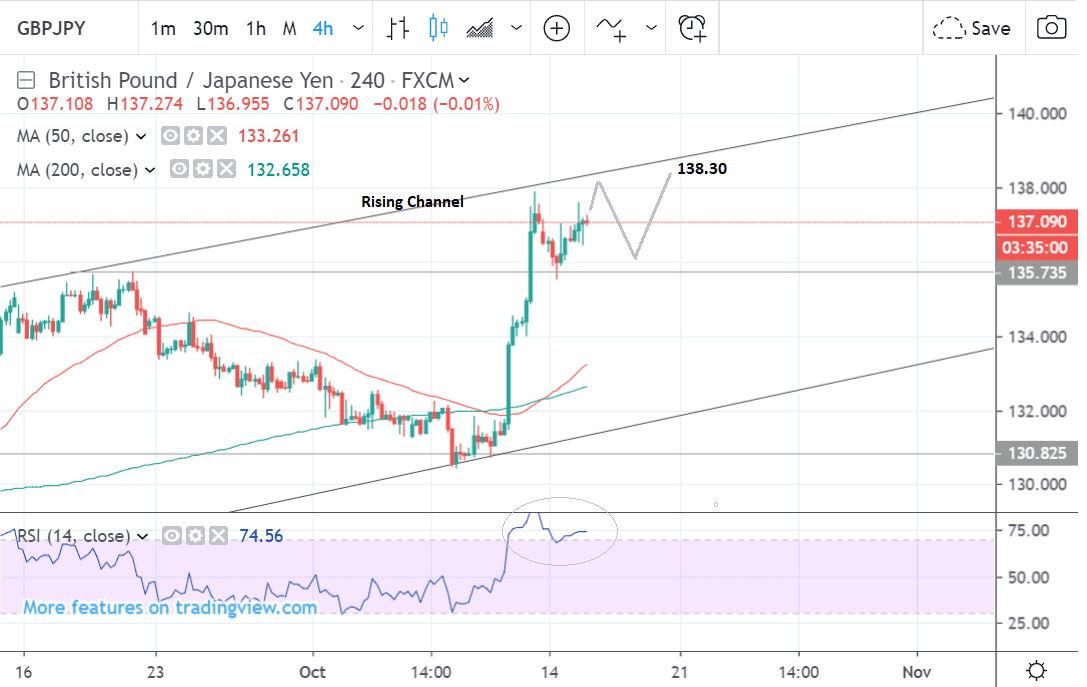 Given the old adage that ‘the trend is your friend’ the uptrend is likely to continue, albeit within a rising channel which will probably include periods of decline.

The pair will probably make a new higher above 138.00 but then get repulsed by the upper channel line and fall back down - perhaps to the 135s. It is possible it could then further rise up again to a new high of 138.30.

The RSI momentum indicator is in the overbought zone above 70 which raises the risk of a pull-back in the exchange in the near-term, although longer-term the pair could still go higher once momentum has dissipated.

The daily chart shows the pair having risen up to the upper channel line of an ascending channel and the 200-day moving average (MA) at about 138.00, both of which are likely to present a tough resistance ceiling for the pair going forward. 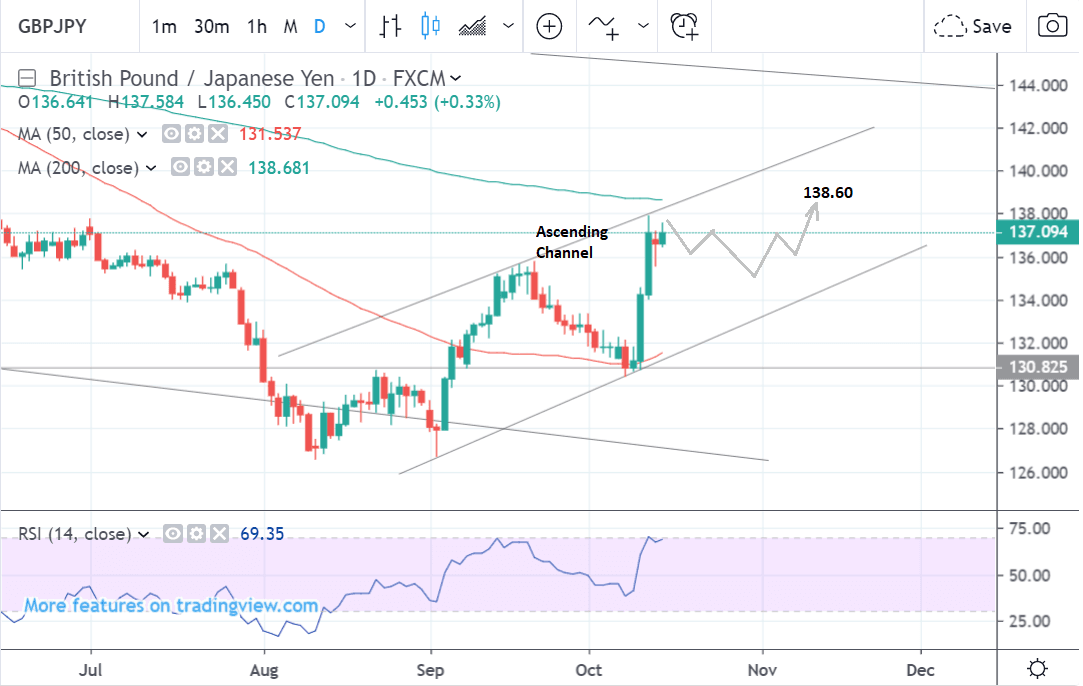 This and the pattern of peaks and troughs in the rising channel so far, suggests the possibility of a correction lower evolving within a broader uptrend.

Such a move could see the pair pull-back down to support in the circa 135.00 region before recovering again.

Given the overall bullish bias from the ascending channel, the pair will probably continue rising up once the corrective sequence is over and reach a target at 138.60 at the level of the 200-day moving average (MA) - perhaps even higher.

The weekly chart shows the pair rising in its ascending channel within a larger wedge formation. 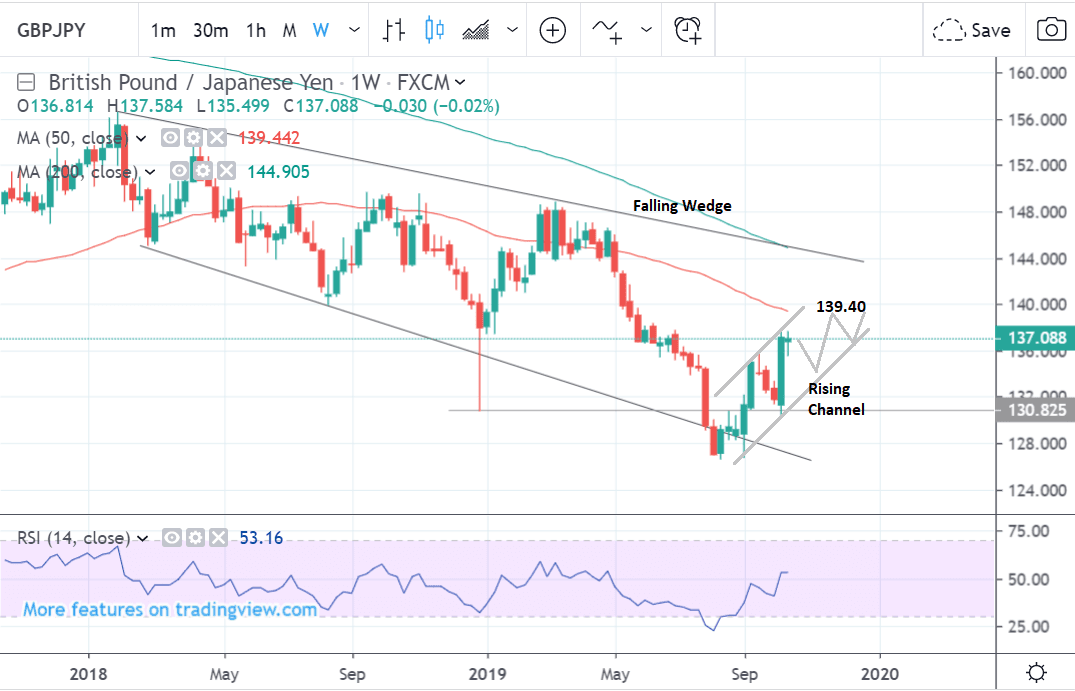 Whilst there is still a risk the pair could resume its longer-term downtrend, which was prevalent for most of 2019, there is also a stronger sense the recover could persist.

We see a possibility the channel could continue rising up until it hits the key resistance level situated at the 50-week MA at 139.40, at which point it could pause and a reassessment of the trend could be necessary.

The main driver of the Yen over the short-term horizon is global investor sentiment, as the currency tends to rise when global markets are falling, and fall when sentiment is bullish and investors are showing an appetite to buy into 'risky' higher yielding assets.

Events which are likely to impact sentiment in the short-term are U.S.-China trade risks and the outcome of Brexit talks as the UK’s deadline for leaving the EU closes in.

The Yen has was the worst performing G10 currency last week, with much of this loss coming on the back of a tentative truce reached in the ongoing U.S.-China trade conflict following a meeting between US President Trump and senior Chinese trade representative Vice Premier Liu He.

The trade deal has yet to be written up and signed by both parties, a process which could take a month or so, and this is concerning investors who see the chance of either party having a change of heart and backing out before the deal is signed and sealed.

Any reversal in sentiment on the deal's failure could benefit the Yen.

"There is a long way to go before even an interim deal is put to paper," says Lee Hardman at MUFG. "President Trump has laid out plans for potentially two further phases of negotiations which would include further talks on intellectual property protection and forced technology transfer. With a more comprehensive deal still a distant prospect, we expect the yen would need significantly more optimism before heading back above the 109.00 level against the US Dollar."

Some economists are saying China cannot meet the terms of the deal as it stands anyway, since to make the $40-$50bn purchases of agricultural products agreed with the U.S. they would have to withdraw certain remaining bans, which are not part of the deal.

China has already made large purchases of soya beans (20 million tonnes), cotton and wheat, but analysts argue the orders could be canceled at any time and prior to delivery, reducing their validity.

On the Brexit front, much uncertainty still exists and although negotiators are aiming to put a deal together before the deadline - working over the weekend if necessary to achieve a result - there is still a chance that like on previous occasions the divide simply cannot be bridged.

EU chief negotiator Michel Barnier was sounding more optimistic about the possibility of a deal on Tuesday, saying “even if an agreement (Brexit) has been difficult, more and more difficult, it’s still possible this week.” He then added, “Reaching an agreement is still possible. Obviously, any agreement must work for all. The whole of the UK and the whole of the EU. Let me add also that it is high time to turn good intentions in a legal text.”

This helped provide an antidote for his previous negative comments on Monday when he said the UK’s proposals ‘were not enough’.

If a deal were struck the Yen would weaken (especially versus the Pound, seeing a massive spike in GBP/JPY) since it would mean the removal of a major risk source from the global tabletop, but likewise there is a risk everything might still fall-apart before the deadline, leading to a probable extension and more uncertainty.