- Risk of reversal and recovery at that level

The Pound-to-Yen exchange rate is trading at around 130.57 after falling almost 1.00% so far this week already. Studies of the charts suggest the pair will continue to decline in the very short-term although beyond that there is a growing chance of recovery.

The 4 hour chart - used to determine the short-term outlook, which includes the coming week or next 5 days - shows the pair falling below the 50% retracement, or midpoint, of the prior uptrend during the first half of September. 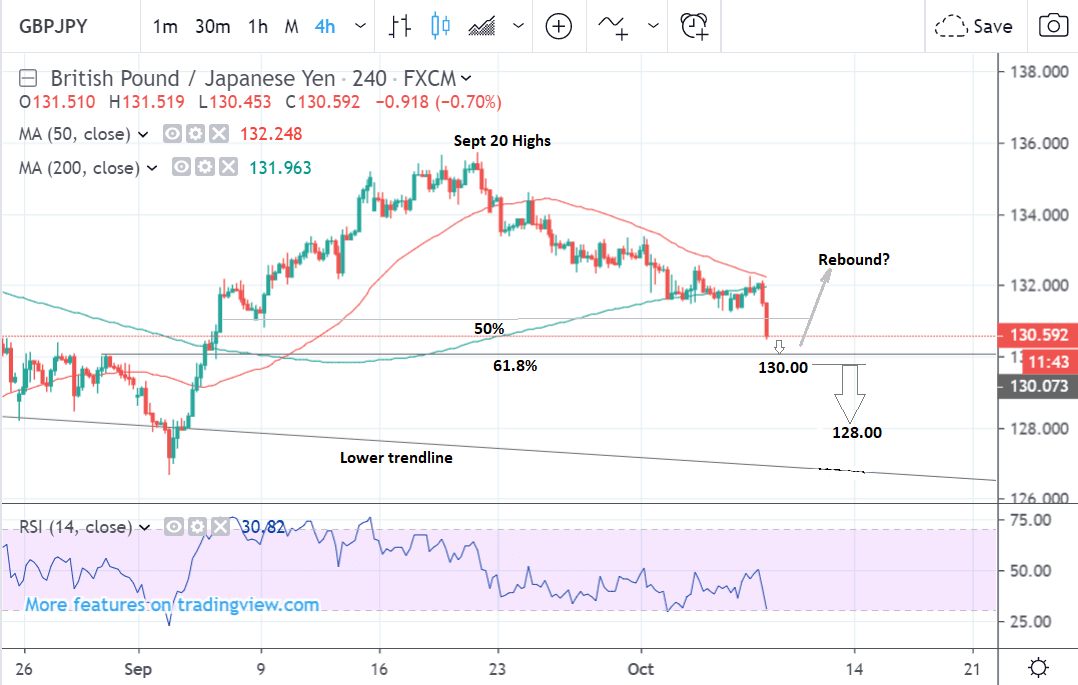 The next support level below that is the 61.8% retracement of the prior move, which is thought to have special support properties. It is related to the 0.618 Fibonacci ratio, also known as the ‘golden ratio’, an important number from classical mathematics.

The 61.8% retracement is at 130.00 and the pair will probably now reach that level given the extreme steepness of the current sell-off, and the extended bearish period since the September highs, which is starting to look like a new short-term downtrend.

130.00 could be a key level for the pair with a clear break below it required for a more bearish outlook to take hold.

Instead, there is a risk that the exchange rate might bottom at that level and then start a recovery.

Such a breakdown would be subject to a break below a 129.50 confirmation level.

The daily chart shows the pair correcting back down to support from the 50-day MA, the 50% retracement and the 61.8% retracement levels of the prior move - all solid barriers to further downside progress. 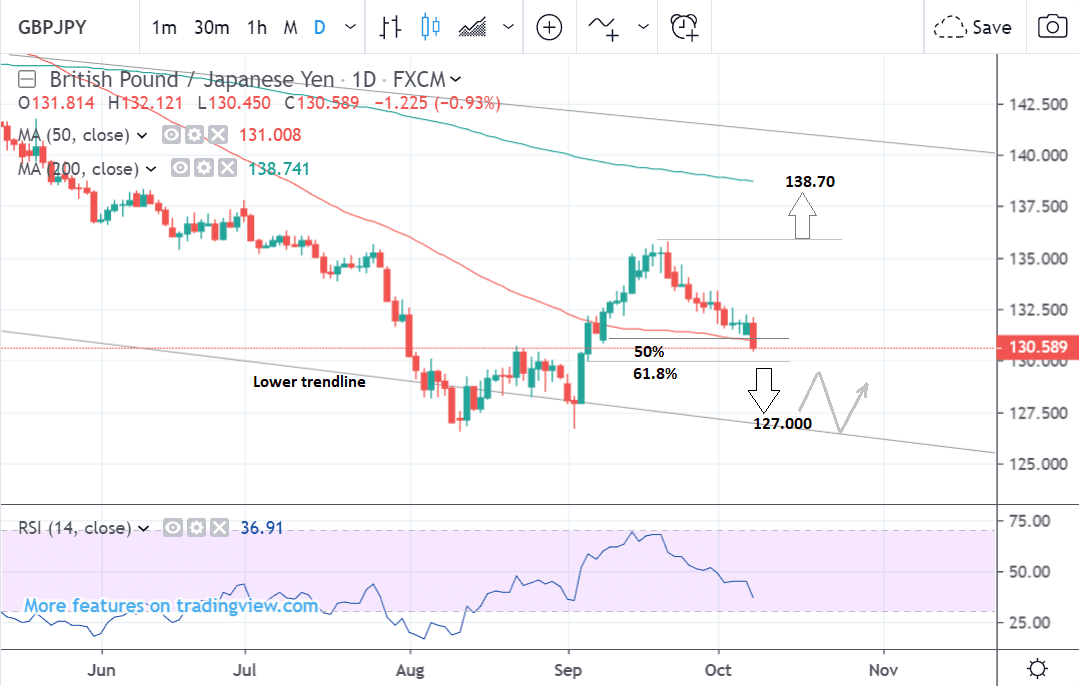 If the pair can break convincingly below the 130.00 level it would probably continue down to a target at 127.00 and the lower trendline of a large wedge pattern.

At that level the trendline would probably support it and see it rebound higher, perhaps beginning a more protracted sideways trend.

The weekly chart shows the same picture only on a wider angle, and it is more bullish than the other timeframes. 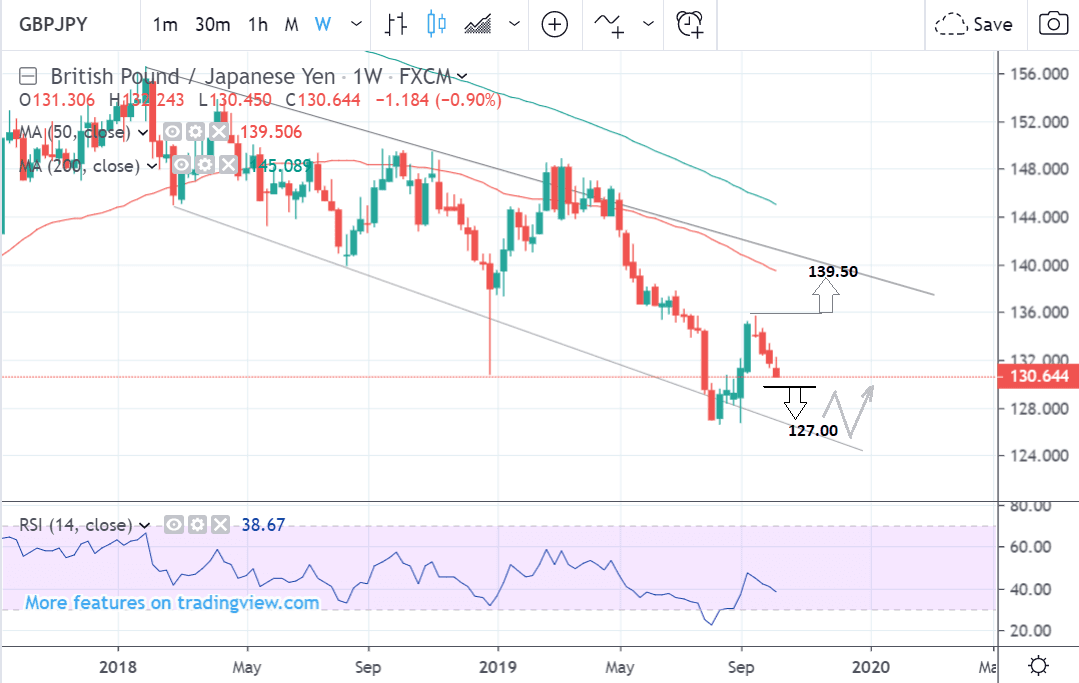 It can be seen how the pair based and rose up steeply in August and how the decline in the last 4 weeks has been less steep than the prior rally.

A break above the 135.75 highs would probably confirm a continuation high to a target at 139.50 in the long-term at the level of the downsloping trendline of the wedge.

The main factor impacting on the Japanese Yen in the near-term is how U.S. and China trade talks, starting this week, evolve.

If the outcome of talks is positive it will pull down the Yen and if it is negative it will have the opposite effect.

This is because the Yen acts like a safe-haven asset which investors buy when there is a crisis or the outlook for the global economy worsens.

The current consensus is that talks will probably not produce a deal, suggesting a chance the Yen will appreciate.

The latest comments from Donald Trump do not sound particularly optimistic.

In regards to the talks, he said: “Can something happen? I guess, maybe. Who knows. But I think it’s probably unlikely.”

Another risk factor is that tensions in Hong Kong impact on the talks. Donald Trump recently called on the HK authorities to show restraint in dealing with the protesters.

“If anything happened bad, I think that would be a very bad thing for the negotiation. I think politically it would be very tough,” said Trump regarding the HK situation.

Jason Wong, an analyst at BNZ Bank is also pessimistic about the chances of the two superpowers agreeing on a deal.

“Expectations are low for any deal to emerge from this 13th round of trade talks,” says Wong.

For him, “a best-case scenario from this week’s talks” would be for the US to agree to delay a proposed increase in tariffs on October 15 which would increase duties on $250bn of Chinese imports from 25% to 30%.”

Talks have already been hit by the news that China has ruled out talking about certain issues, including intellectual property, technology transfer and state subsidies.

The exclusion of subjects the U.S. wishes to discuss will not make reaching an agreement any easier.

“China is said to exclude a commitment on reforming industrial policy or government subsidies, taking one of Trump’s core demands off the table,” says Wong.

One positive event on the trade front, however, is that the U.S. has agreed to lift a proposed ban on U.S. investors buying Chinese stocks.

Yet the overall pessimistic consensus outlook suggests an upside bias for the Japanese currency from fundamental factors in the near term.