- U.S.-China trade talks could be pivotal for Yen

The Pound-to-Yen exchange rate (GBP/JPY) is trading at 143.40 at the time of writing after enjoying a fairly strong rise in 2019 which resulted in it successfully hitting our initial previous upside target at 142.00.

Gains have come from a mixture of both Pound strength on an improved Brexit outlook and Yen weakness amidst a broad-based rally in global stock markets which tends to be a negative for this ultra 'safe haven' currency.

The technical outlook favours more upside on the condition the GBP/JPY exchange rate can break clearly above immediate resistance from moving average and trendline. 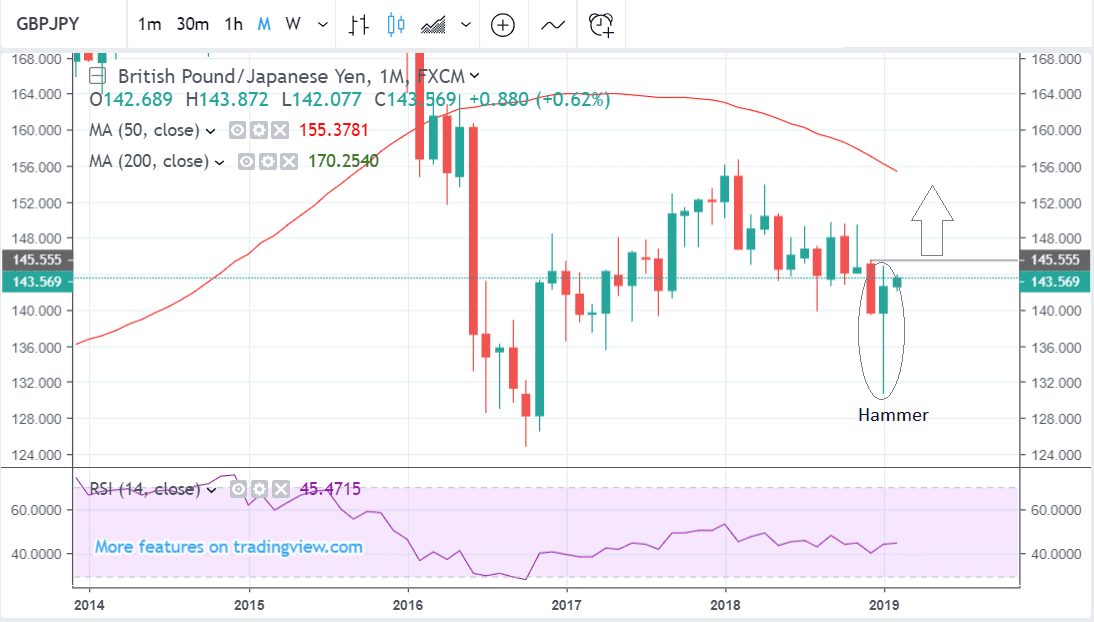 The monthly chart shows how the pair formed a long Japanese hammer candlestick pattern in the month of January and this is a strong indicator a bullish reversal is on the cards.

A break above the December highs at 145.55 would provide an even stronger confirmation signal of more upside on the horizon as it would suggest the market had performed a monthly pivot swing higher, which is a very bullish medium-term signal for the pair. 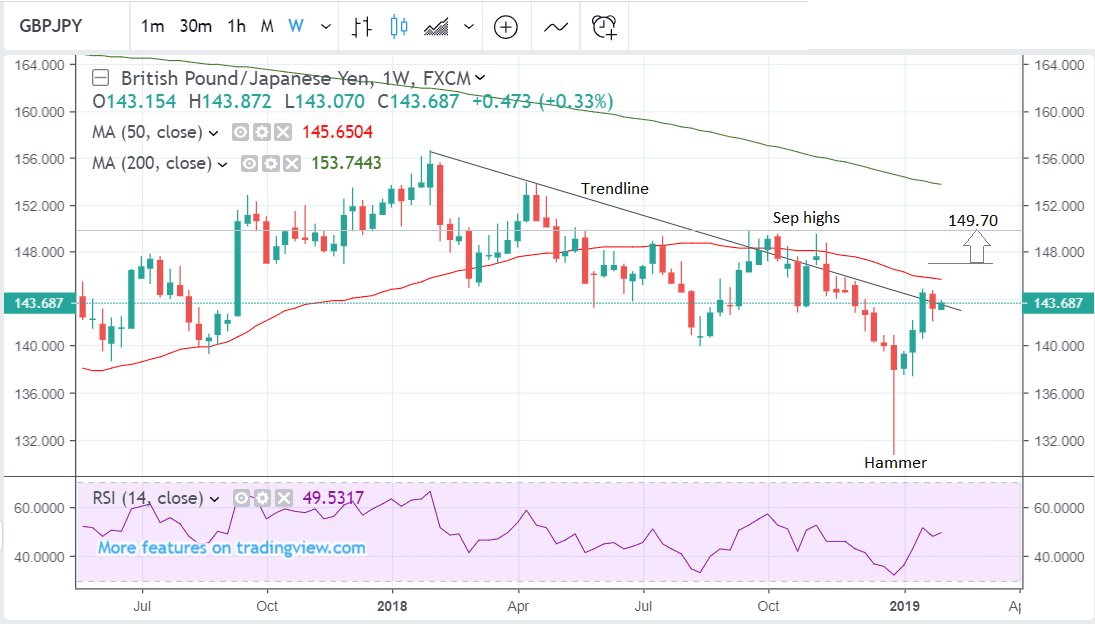 The weekly chart shows the exchange rate attempting to break above the year-long downsloping trendline from the January 2018 highs.

A break above the trendline would also be a bullish sign for the pair. The 50-week moving average (MA) is at 145.65 and is likely to act as a ceiling blocking further upside progression.

A clear break above this resistance level, however, as would be the case if the exchange rate were to rise above 146.70, would provide the necessary confirmation for expecting more upside to a target at 149.70. 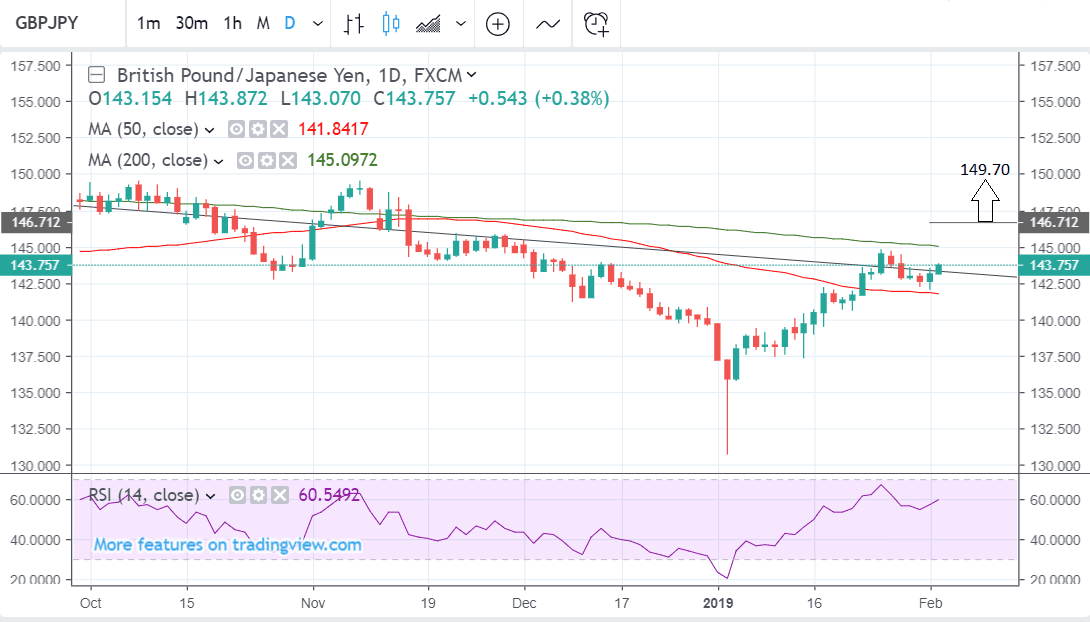 The daily chart above shows the established short-term trend higher since the hammer lows formed at the beginning of the year in more detail.

GBP/JPY has just pulled back after encountering resistance from the trendline in the 143s. It has still not broken clearly above the 200-day MA but a move above 146.70 - the confirmation level stipulated on the weekly chart - would produce the necessary confirmation for the continuation higher to the aforesaid target at 149.70.

Momentum, as indicated by RSI, is rising along with the exchange rate and is supportive of the overall bullish forecast.

The Yen: What to Watch this Week

The Japanese Yen is a safe-haven currency which means it rises when markets are in turmoil. The current broad backdrop of global uncertainty and muted growth expectations is, therefore, seen as a positive factor for the currency.

The Yen is also viewed by most analysts are ‘undervalued’ compared to fair value estimates based on economic fundamentals. The pair is expected to drift higher as a consequence, further supporting the outlook for the Yen.

An improvement in trade talks between the U.S. and China, however, has pressured the Yen lower more recently. Both sides are seen as being more motivated to get a quick deal than to obstruct progress. The Chinese need a deal to stabilize growth amidst fears of a slowdown, and the Trump needs one to support his credentials as a master deal-maker before the elections.

The Chinese also cleverly targeted their sanctions to cause the most damage to states which voted for Trump so he will want to appease his supporters in those states with a deal which will improve their lot.

“We are getting more confident that we are closer to a deal and that the probability of a deal in March has increased,” says Allan von Mehren, chief analysts at Danske Bank. “The intense efforts put into the talks at the highest level – including from Trump and Xi – suggest that both sides are very keen to get the work done.”

Striking a deal is in China’s best interest because it needs “more breathing space in tackling its debt challenges” and “Trump can present himself as the great deal maker to the American population going into the 2020 election campaign with a package that will benefit key voters in swing states.”

China’s tariffs especially hurt U.S. soybean farmers who voted predominantly for Trump and in a recent press conference the President “emphasised several times the large amount of soybeans that China will now buy and how it would benefit the farmers,” says Von Mehren.

On the hard data front, meanwhile, one of the key releases is the ‘leading economic index’, which is a composite of the most forward-looking Japanese datasets. It is forecast to show a fall to 97.9 in December from 99.1 in November and is expected to be released at 5.00 GMT on Thursday.

The ‘economy watchers’ survey for January is out at 5.00 on Friday and the coincident index at the same time on Thursday.