The US Dollar extended losses Wednesday as global market jitters over European politics eased and traders responded to a surprise downward revision to the latest estimate of US first-quarter GDP.

US economic growth for the first three months of the year came in at an annualised pace of 2.2%, down from 2.9% in the final three months of 2017 and beneath the 2.3% initial estimate, according to Bureau of Economic Analysis data released Wednesday, May 30.

The BEA attributes the downward revision to a slower pace of inventory investment, a lesser amount of residential fixed investment and exports that were a fraction lower than previously thought.

"First quarter GDP was revised down marginally in the second release, but some of the detail was more encouraging," says Andrew Grantham, an economist at CIBC Capital Markets. "With retail sales figures suggesting that the sluggish pace of consumer spending is turning around, and with more room now for inventories to add to Q2 growth, we expect GDP to accelerate to above 3% in the second quarter."

Therefore today's dynamics are not supportive of the Dollar. 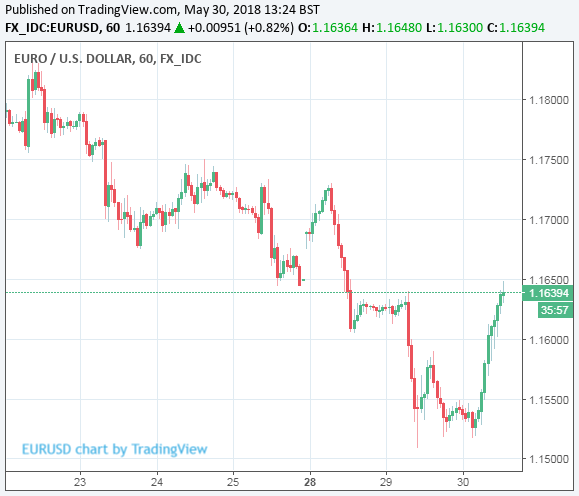 The greenback was quoted lower against all developed world currencies barring the safe haven Japanese Yen, against which it rose 0.39% to 108.9. 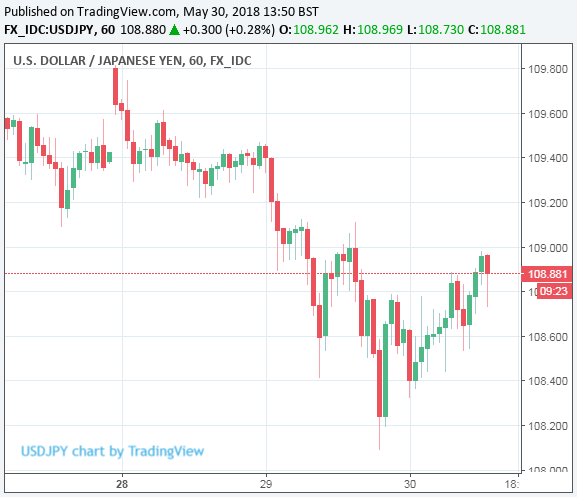 Wednesday's data comes as the US Dollar eases back from recent highs in response to the latest developments in the Italian political saga, which have helped stem the revival of fears over the stability of the Eurozone. The GDP number also comes amid an eight week-long rally that has seen the US Dollar convert convert a 4% 2018 loss into a 1.7% gain. 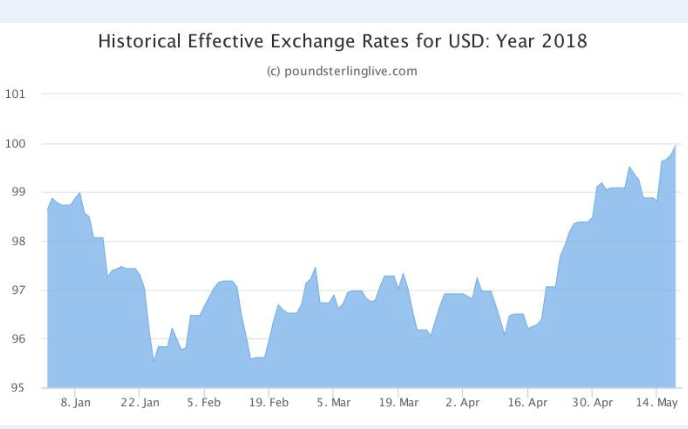 Above: US Dollar Index.

Driving the recent Dollar rally has been a sudden shift in global bond markets, which saw yields on American bonds of all tenures rise to multi-year highs that have pushed interest rate differentials favouring the Dollar to near record levels.

Those more favourable yield differentials have seen international investors, particularly so called carry traders, incentivised to sell lower yielding currencies and buy the Dollar in order to invest in the US bond market.

An inflation-boosting rise in oil prices, superior levels of US economic growth and rising issuance of new bonds at the US Treasury in order to finance President Trump's budget-busting tax cuts have all been credited, to at least some extent, with driving the bond market shift.

This has lifted the Dollar because markets have seen it as a sign the Federal Reserve could soon be forced to step up the pace at which it raises US interest rates, in order to contain rising levels of inflation.

The US consumer price index rose to 2.5% during April, above the Fed's 2% target, while the more important core measure of inflation held steady at 2.1%. Other measures of inflation, such as the Fed's preferred personal consumption expenditures index, are also sat at 2%.

"Inflation has recovered more quickly than we anticipated, though not because of the factors one would expect at this stage in the cycle – namely labour market tightness," says Bill Diviney, a senior economist at ABN Amro. "While it gives the Fed greater confidence to continue gradual rate hikes, we do not view it as a sign that inflation is on the verge of picking up significantly."