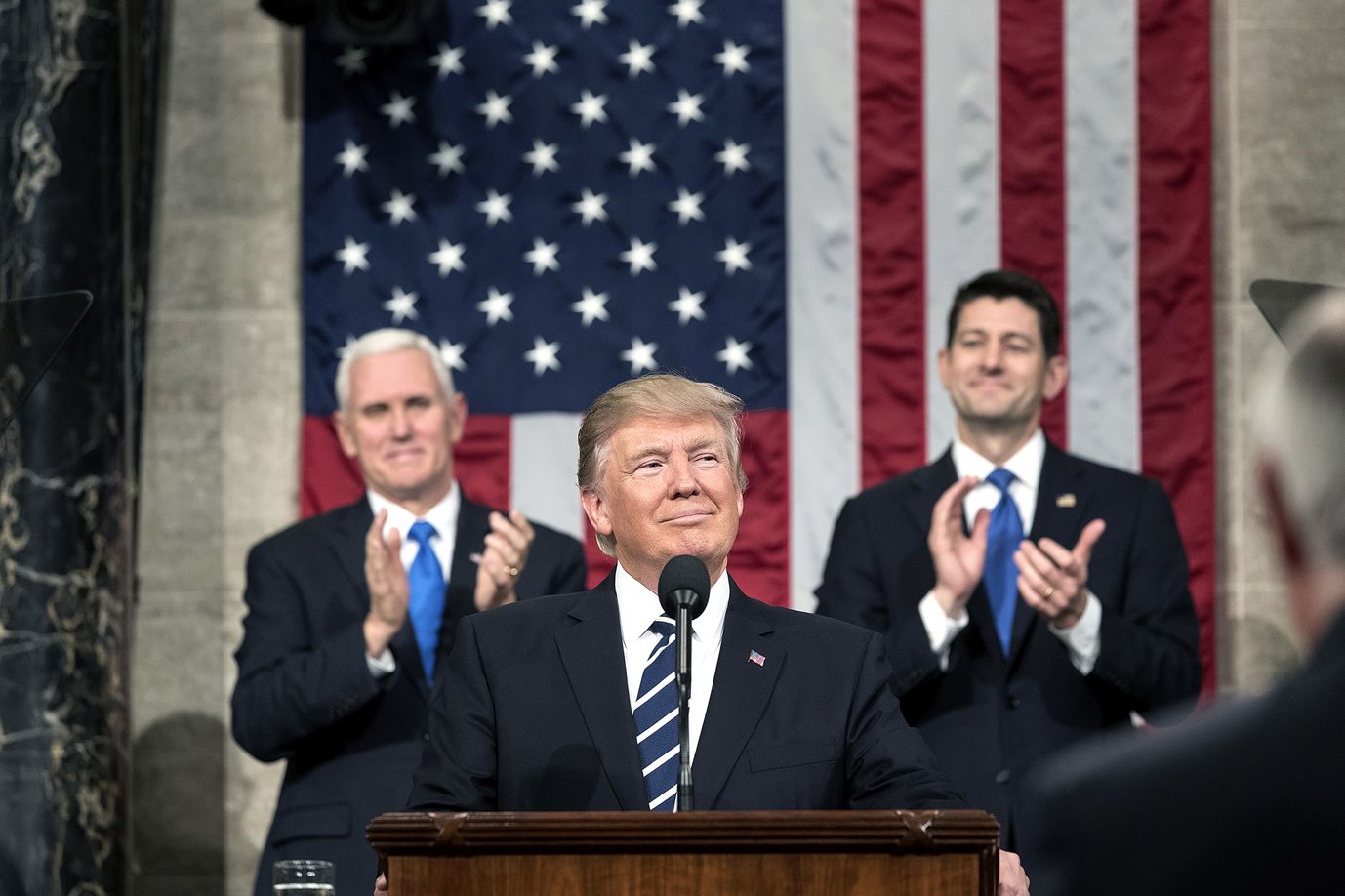 The Dollar is eyeing political developments as lawmakers in Washington got one step closer to bringing in laws that will increase spending by 300bn and extend the government's borrowing limit.

In the early hours of Friday morning US senators voted to pass a bill that will raise government caps on military and domestic spending, increasing overall government spending by 300bn, and preventing government shutdowns by guaranteeing a higher debt cieling until March 2019.

It came as no surprise the Senate would pass the bill since it was their brain-child in the first place, borne of cross-party party talks aimed at steadying the US financial ship, after several years plagued by spontaneous government shutdowns and politicians using opportunistic brinkmanship to further personal causes.

The bill is now being debated in the House of Representatives (Congress) where it will also need to secure a majority vote to pass into law, if it is successful it will probably lead to a rise in the Dollar in the short-term judging from the reaction on Thursday when the bill was first tabled.

"The threat of a technical shut down in the US government could be weighing on the USD. The latest funding bill was held up by technical procedures in the Senate, but should pass around 2am Washington time," says Manuel Oliveri with Crédit Agricole.

There remain concerns, however, that it could struggle to get a majority in Congress where Democrats are angered at the lack of provision for child immigrants and Republicans at the excessive rise in spending.

The Dollar rose after the initial news of a proposal on Thursday morning, with the Dollar Index - a representation of the value of the Dollar against a trade-weighted basket of currencies - rising to 90.40 - although since then it has moderated back to 90.20.

Overall, however, the currency remains in a short-term uptrend which is more likely to continue rising than fall. 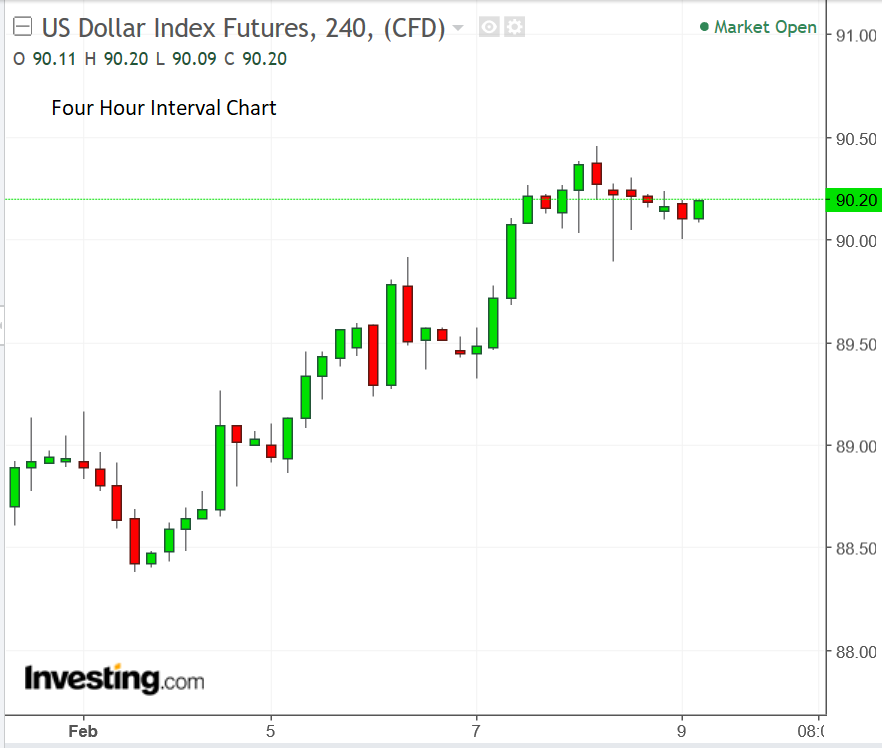 "The Dollar was boosted after US Senate leaders reached a budget agreement for the next two years that would raise the spending caps on defense and domestic spending (and hence increase borrowing) significantly," says Marshall Gittler, chief strategist with ACLS Global.

The longer-term impact on the Dollar may be more complex to gauge however.

The $300bn extra spending, if passed, is certain to deepen the US budget deficit - that is the difference between the government earns in revenue and what it spends.

The deficit is already set to deepen due to US tax cuts which will lessen the government's main source of revenue immediately.

Therefore, the longer term effect may be more bearish than bullish for USD.

The United States has a much bigger spending problem than suggested by the periodic squabbling over short-term expenditure.

A widening budget deficit combined with the US's already deep current account deficit is, say experts, a very negative indicator for a currency.

The current account is the net balance of incomings and outgoings for a country with its trade neighbours, and when it is in deficit, it shows the country is spending more on foreign goods and services, as well as sending more money overseas, than it is receiving.

To make up for the shortfall the country usually has to borrow the difference from foreign lenders or sell its assets.

If it has to borrow then it needs a strong credit rating and this is why it is better not to have a budget deficit because that indicates a lack of thrift and makes borrowing more difficult and expensive.

The relationship between both deficits and the Dollar is shown in the chart below, which overlays the Dollar index with a composite hybrid of the two deficits developed by Toronto-based investment bank BMO Capital Markets.

The 'twin sin score' is calculated by summing and averaging the budget and current account deficits as percentages of GDP and plotting the average.

As can be seen from the chart below the twin sin score tracks the Dollar very closely and careful observation will verify that it actually tends to pre-empt turns in the currency making it a good forecaster. 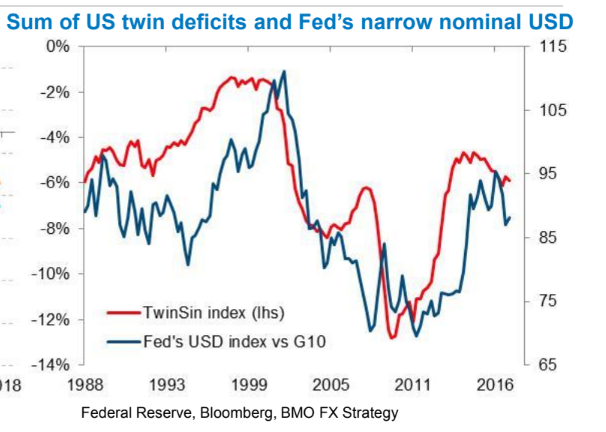 Thus, although the Dollar has risen on the news that Washington is attempting to broker a financial peace deal it could fall if investors consider the proposals come at a hefty cost.