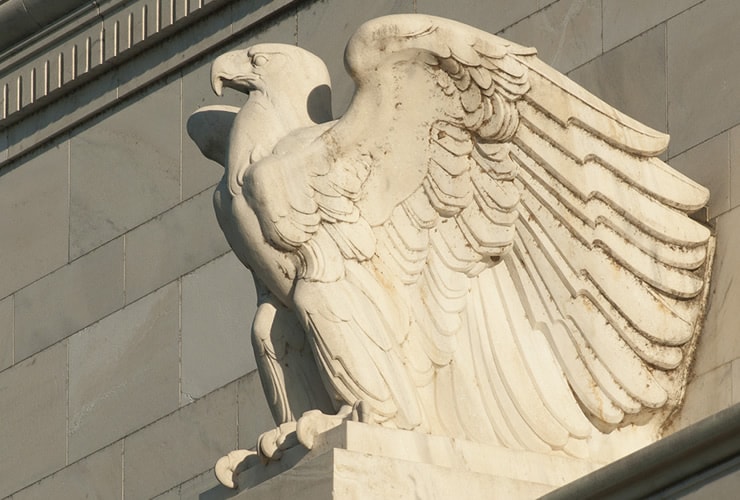 The US Dollar's sombre outlook remains intact in the wake of the release of the minutes from the December policy meeting of the Federal Reserve which offered no cause for expecting a change in policy on the horizon.

The Dollar was little changed in Thursday morning trade after the release of the Federal Reserve December meeting minutes on Wednesday, which were out at 19.00 GMT.

The minutes failed to lift US treasury yields as they confirmed there was little prospect of an acceleration in the pace of interest rate rises at the Fed in 2018 - a prerequisite for any sustained turnaround and rise in the value of the Dollar.

Given the hype ahead of the event, the resulting lack of volatility was disappointing to a market hungering for some up and down.

Markets had feared the minutes would show the majority of members endorsing Yellen's more cautious view on inflation which have kept a lid on US treasury yields of late and coincides with the recent bout of Dollar weakness.

The head of the Federal Reserve proved something of a 'kill-joy' after the last meeting when she suggested she had shifted her previous stance of seeing low inflation as only a temporary aberration, to viewing it as something longer term and altogether more endemic.

This weighed on the Dollar as it suggested the Fed might not decide to raise interest rates as much as previously forecast - or that if it did raise them it would not be expecting the increase them to a very high final level, or terminal rate, as it is called, due to Japanese-style persistently low inflation.

"The overall impression from the December FOMC meeting is that there appears to be a high hurdle for the Fed to deliver a faster pace of rate hikes beyond their current plans for three hikes in 2018. As a result, we continue to believe that the US dollar will struggle to reverse last year’s weakening trend," says Lee Hardman, an analyst with MUFG in London.

The Dollar tends to rise in tandem with interest rates because they attract higher inflows of foreign capital drawn by increasing returns the higher they go.

Members appeared roughly equally split, with two sharing Yellen's misgivings about long-term inflationary pressures (Kashkari and Evans) and therefore voting against a further rate rise, but a similar number at the other end of the spectrum expressing even more hawkish views about inflation, and the majority somewhere in the middle.

The fact the majority of Fed members continued to retain the same stance as the previous meeting and still believed the FOMC  would vote for three more interest rate hikes in 2018, was the key point in establishing the Fed's "base view", which, in Loh's opinion had not changed.

Marginally more dovish - which means in favour of lower interest rates - was the reaction of Hussein Sayed, Chief Market Strategist at FXTM, who said member's lack of any expectation of higher inflation from tax reforms was a sign of dovishness.

"Fed policymakers also seem uncertain about the impact of tax reduction on capital spending and the overall economy, which sounds somehow dovish to me," says Sayed.

Yet, to a certain extent, the explanation is more due to their view of how corporations will spend the tax money they get, which the Fed expects to go into share-buybacks and savings rather than growth-orientated investment of higher staff remuneration.

"Even though weak inflation remains a sore spot for the US central bankers, the majority of FOMC members continues to believe that the increasingly tight labour market will be reflected in rising wage pressure and thus medium term in higher inflation," Says Nguyen.

Interestingly Nguyen also notes presciently that the two members who voted against the hike, as well as the chair Janet Yellen, will be rotated out of the Fed's inner core of members with a right to vote, this year and this could change the distribution of the Fed to a more hawkish membership.

"Both the President of the Chicago Fed, Charles Evans, as well as his colleague of the Minneapolis Fed, Neel Kashkari, had voted against a rate hike last month. But as a result of the rotation procedure amongst the regional Fed Presidents they will lose their voting right this year," says the Commerzbank analyst.

In addition, the new members who will replace them have sounded on the hawkish side up until now.

"Raphael Bostic (Atlanta Fed), Loretta Mester (Cleveland Fed) as well as John Williams (San Francisco Fed), who will now become part of the FOMC in their place amongst others recently sounded significantly more optimistic as regards the inflation outlook and therefore spoke out in favour of continuing gradual rate hikes."

Another personnel issue which could make the composition of the Fed more hawkish is the fact that the Board of Governor's has shrunk which means the Regional Fed Presidents now have the upper hand in the FOMC.

The Board of Governors are the standing members of the Fed and normally number seven in total, including the Chair and the Vice-Chair. At the moment there are only four since the members who retired have not been replaced.

When Yellen leaves in February the Board will shrink even further to just three members: Jerome Powell the new Chair, Randal Quarles the current Vice-Chair and Lael Brainard.

"This is a rather unusual situation as the Board of Governors with its total of seven positions and a usually unanimous front tends to have the upper hand in monetary policy decisions," says Nguyen, adding:

"It is likely to take quite a while yet until the positions on the Board have been filled and until then it will probably pay off to listen to the comments by the regional Fed Presidents."