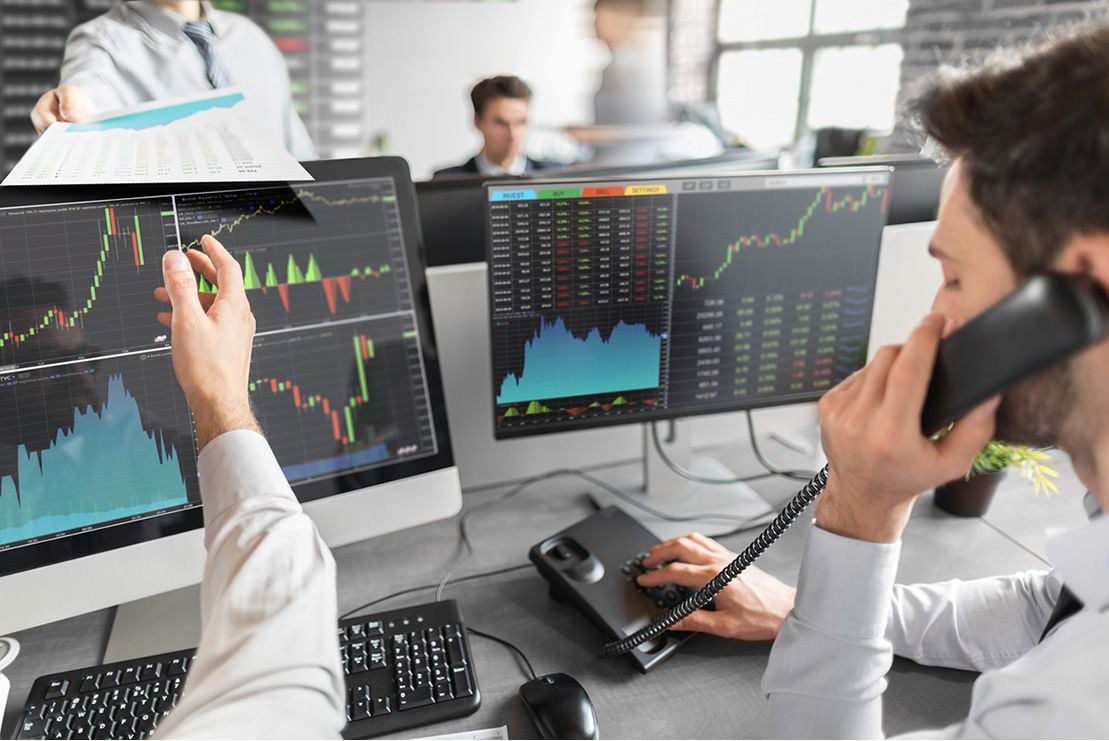 The Dollar is giving ground at the beginning of 2018 but analysts are divided in their opinions as to what might be causing it.

The US Dollar has started the new year with a whimper, not a bang after weakening against most major counterparts on the first working day of 2018.

The US currency is seen trading down 0.30% versus a trade-weighted basket of counterparts in midweek trade having reached 91.88; the index had been as high as 94.00 in December.

Looking at the key pairs, the Euro-to-Dollar exchange rate has risen amidst Dollar weakness rising to reach a 2018 high of 1.2081 with strong German manufacturing data playing a part in the rise.

The Pound-to-Dollar exchange rate has meanwhile climbed to 1.3613 having risen by a similar margin to its EUR/USD counterpart confirming that in both instances Dollar weakness is largely the overarching theme. 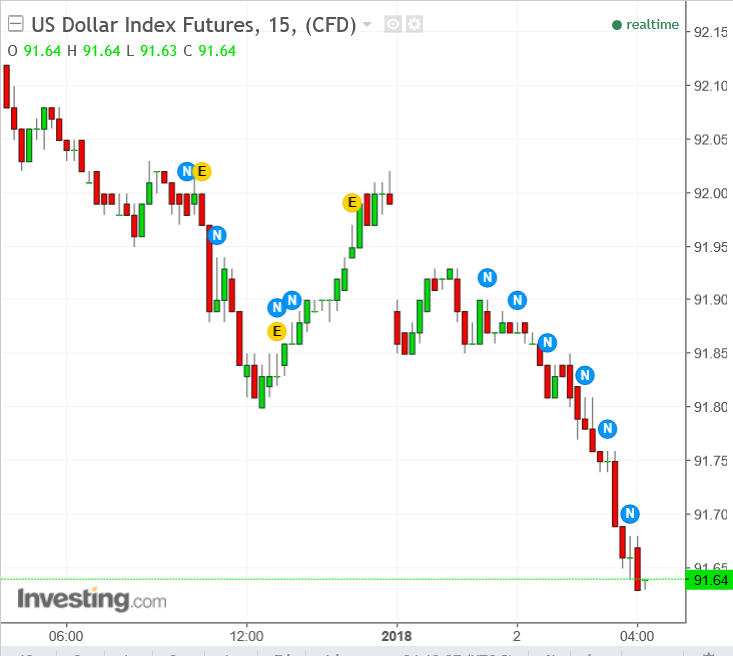 Above: The Dollar index confirms a trend lower is in place.

Reasons for the weakness appeared to be mixed, although the fall in the US Dollar corresponded with a drop in US Treasury bond yields, which suggest markets are cooling expectations for higher interest rates in the United States in 2018.

"The US curve came under pressure, driven by the ultra-long end, with 10Y maturities up by 5bp," says Michael Rottmann, Head of Fixed Income Strategy with UniCredit Bank at Munich.

The fall in U.S. Treasury yields is widely blamed on expectations regarding future Federal Reserve interest rate policy. The Fed is expecting to raise interest rates three times in 2018 - the market is more sceptical and expects it to raise them less than three times - should either of these expectations be lowered we would expect the Dollar to fade accordingly.

Recent cautious commentary regarding inflation from the outgoing governor of the Fed Janet Yellen, in which she changed her stance from seeing low inflation as a short-term problem to it possibly being part of a longer-term 'new normal' had cooled expectations for an agressive strategy of interest rate rises.

Furthermore, it is worth noting that the leadership at the Federal Reserve is due to be replaced in 2018 and markets are unsure as to what policies the new team will pursue.

As such, caution appears to be a favourite theme at this juncture. "The Dollar has endured a torrid start to 2018, with the dollar index hitting a three month low despite three rate hikes from the Fed and US growth looking set for a tax induced boost," says Joshua Mahony, an analyst with IG.

Reports from FXStreet note the Dollar might be weakening due to traders holding back out of possible fear at the contents of the minutes from the Fed's last meeting, which are due for release on Wednesday at 19.00 GMT, and could hold similarly cautious ensemble views on inflation as Yellen's.

This week sees a major focus on the US, with the latest Fed minutes accompanying the usual jobs focus associated with the first week of the month.

"With market expectations pointing towards two rate hikes in 2018, and a 68% change of a March rate hike, the focus will be on the inflation expectations as a key determinant of ongoing rate hike expectations," says Mahony.

Nevertheless, it should be borne in mind that the market is currently pricing in a much shallower interest rate curve compared to the Federal Reserve and unlike the Fed, does not expect three hikes in 2018.

As such for those already modest expectations to be debased further is a little surprising and some market analysts think the Dollar is already fairly heavily oversold and thus due to a recovery.

"That said, the U.S. dollar is underloved and oversold and it won’t take much to promote a bout of profit-taking from the shorts," adds Chris Weston with IG.

Another factor which may be weighing on the Dollar could be the anticipation of outflows from the US to the rest of the world (RoW) 2018 as global growth changes up a gear.

Several analysts, but most notably, ING's Global Head of Strategy Chris Turner have warned US Dollar weakness in 2018 won't be homegrown but more due to RoW because of its relative attractiveness.

This morning's strong Chinese data, with Manufacturing PMI's surprising to the upside with  51.5 results and Chinese equities vaulting higher are testament to the global growth potential central to the RoW thesis.

The Dollar's rise at the end of 2016 and beginning of 2017 was a result of optimism about Trump's tax reforms, fiscal agenda, and infrastructure spending.

However, now tax reforms are coming into effect the Dollar appears to be backtracking and giving up the gains it made based on the early promises.

The explanation appears to be that analysts have become sceptical about the amount of growth which is likely to come out of tax cuts.

"However: To what extent will the tax cuts fuel consumption? The over-proportionate relief for higher earners and the time limit until 2024 suggests that the effect on consumption will be limited. As a result, the majority of economists have so far hardly raised their US growth forecasts - or only by a little. That means the effect of the income tax is the following: it may lead to some dollar strength, but not very much," says Commerzbank analyst Ulrich Leuchtmann.

Indeed, the downside of tax cuts is that they must be financed by borrowing and this will result in higher government debt which could lead to a weaker Dollar in the longer-term.

"I think there is a lot to be said in favour of the idea that future US dollar strength sows the seed for future, sustainable dollar weakness, as US debt levels will increasingly become an issue for the market and the monthly US trade balance data will once again become the “mother of all data”," adds Leuchtmann.